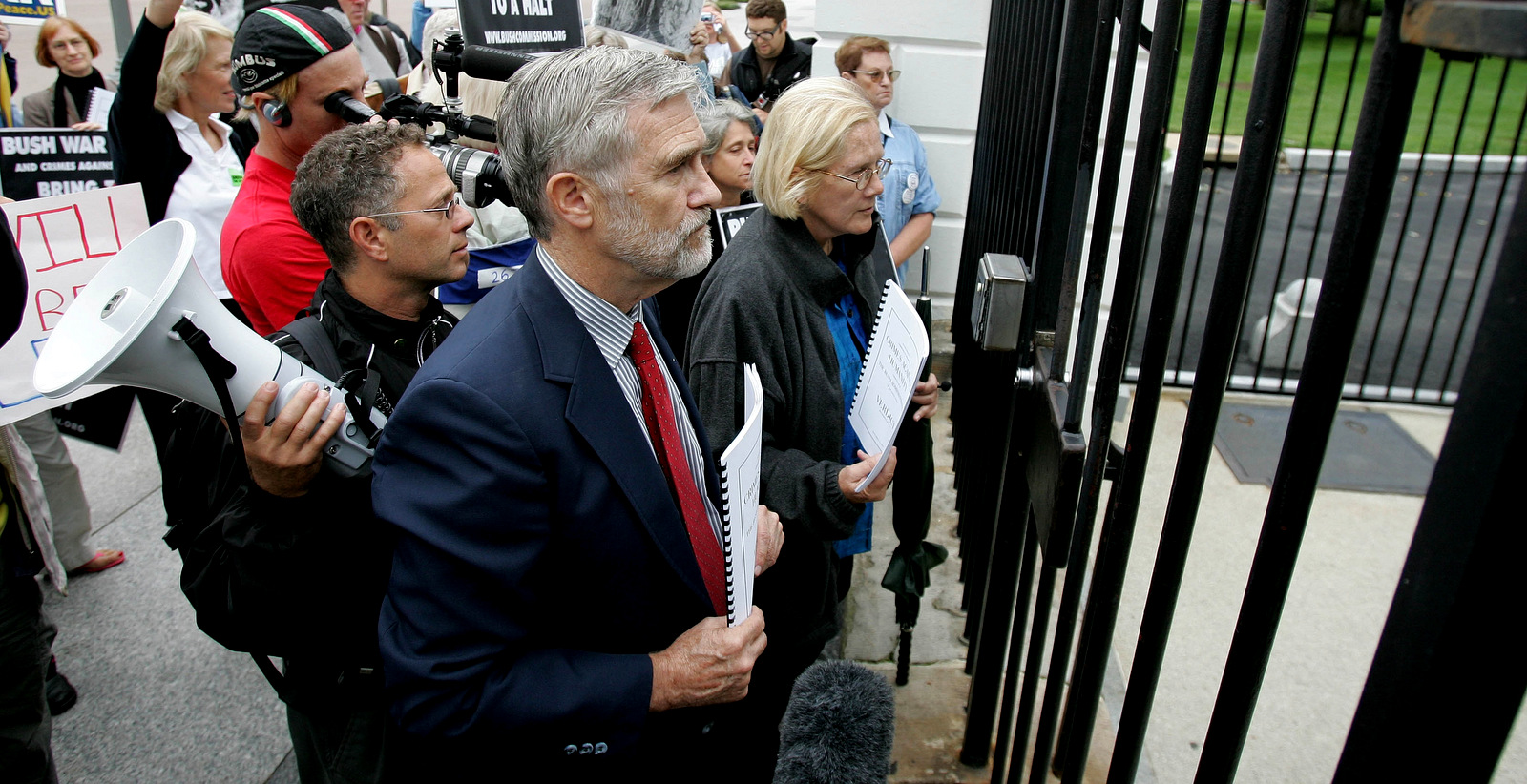 My First Day as CIA Director

Opinion — Now that I have been nominated again – this time by author Paul Craig Roberts – to be CIA director, I am preparing to hit the ground running.

This time around, on the off-chance I do get the nod, I have taken the time to prepare the agenda for my first few days as CIA director. Here’s how Day One looks so far:Last time my name was offered in nomination for the position – by The Nation publisher Katrina vanden Heuvel – I did not hold my breath waiting for a call from the White House. Her nomination came in the afterglow of my fortuitous, four-minute debate with then-Defense Secretary Donald Rumsfeld, when I confronted him on his lies about the attack on Iraq, on May 4, 2006 on national TV. Since it was abundantly clear that Rumsfeld and I would not get along, I felt confident I had royally disqualified myself.

Get former National Security Agency Technical Director William Binney back to CIA to join me and the “handpicked” CIA analysts who, with other “handpicked” analysts (as described by former National Intelligence Director James Clapper on May 8, 2017) from the FBI and NSA, prepared the so-called Intelligence Community Assessment (ICA) of Jan. 6, 2017. That evidence-impoverished assessment argued the case that Russian President Vladimir Putin ordered his minions “to help President-elect Trump’s election chances when possible by discrediting Secretary Clinton.”

When my predecessor, CIA Director Mike Pompeo invited Binney to his office on Oct. 24, 2017 to discuss cyber-attacks, he told Pompeo that he had been fed a pack of lies on “Russian hacking” and that he could prove it. Why Pompeo left that hanging is puzzling, but I believe this is the kind of low-hanging fruit we should pick pronto.

The low-calorie Jan. 6 ICA was clumsily cobbled together:

“We assess with high confidence that Russian military intelligence … used the Guccifer 2.0 persona and DCLeaks.com to release US victim data obtained in cyber operations publicly and in exclusives to media outlets and relayed material to WikiLeaks.”

Binney and other highly experienced NSA alumni, as well as other members of Veteran Intelligence Professionals for Sanity (VIPS), drawing on their intimate familiarity with how the technical systems and hacking work, have been saying for a year and a half that this CIA/FBI/NSA conclusion is a red herring, so to speak. Last summer, the results of forensic investigation enabled VIPS to apply the principles of physics and the known capacity of the internet to confirm that conclusion.

Oddly, the FBI chose not to do forensics on the so-called “Russian hack” of the Democratic National Committee computers and, by all appearances, neither did the drafters of the ICA.

Again, Binney says that the main conclusions he and his VIPS colleagues reached are based largely on principles of physics – simple ones like fluid dynamics. I want to hear what that’s all about, how that applies to the “Russian hack,” and hear what my own CIA analysts have to say about that.

I will have Binney’s clearances updated to remove any unnecessary barriers to a no-holds-barred discussion at a highly classified level. After which I shall have a transcript prepared, sanitized to protect sources and methods, and promptly released to the media.

At that point things are bound to get very interesting. Far too few people realize that they get a very warped view on such issues from the New York Times. And, no doubt, it would take some time, for the Times and other outlets to get used to some candor from the CIA, instead of the far more common tendentious leaks.  In any event, we will try to speak truth to the media – as well as to power.

I happen to share the view of the handful of my predecessor directors who believed we have an important secondary obligation to do what we possibly can to inform/educate the public as well as the rest of the government – especially on such volatile and contentious issues like “Russian hacking.”

What troubles me greatly is that the NYT and other mainstream print and TV media seem to be bloated with the thin gruel-cum-Kool Aid they have been slurping at our CIA trough for a year and a half; and then treating the meager fare consumed as some sort of holy sacrament. That goes in spades for media handling of the celebrated ICA of Jan. 6, 2017 cobbled together by those “handpicked” analysts from CIA, FBI, and NSA.  It is, in all candor, an embarrassment to the profession of intelligence analysis and yet, for political reasons, it has attained the status of Holy Writ.

The Paper of (Dubious) Record

I recall the banner headline spanning the top of the entire front page of the NYT on Jan. 7, 2017: “Putin Led Scheme to Aid Trump, Report Says;” and the electronic version headed “Putin Led a Complex Cyberattack Scheme to Aid Trump, Report Finds.”  I said to myself sarcastically, “Well there you go!  That’s exactly what Mrs. Clinton – not to mention the NY Times, the Washington Post and The Establishment – have been saying for many months.”

Buried in that same edition of the Times was a short paragraph by Scott Shane: “What is missing from the public report is what many Americans most eagerly anticipated: hard evidence to back up the agencies’ claims that the Russian government engineered the election attack. That is a significant omission.”

Omission? No hard evidence?  No problem. The publication of the Jan. 6, 2017 assessment got the ball rolling. And Democrats like Adam Schiff (D-Calif.) ranking member of the House Intelligence Committee, were kicking the ball hard down the streets of Washington.  On Jan. 25, 2017, I had a chance to confront Schiff personally about the lack of evidence — something that even Obama had acknowledged just before slipping out the door. I think our two-minute conversation speaks volumes.

Now I absolutely look forward to dealing with Adam Schiff from my new position as CIA director.  I will ask him to show me the evidence of “Russian hacking” that he said he could not show me on Jan. 25, 2017 – on the chance his evidence includes more than reports from the New York Times.

Intelligence analysts put great weight, of course, on sources.  The authors of the lede, banner-headlined NYT article of Jan. 7, 2017 were Michael D. Shear and David E. Sanger; Sanger has had a particularly checkered career, while always landing on his feet.  Despite his record of parroting CIA handouts (or perhaps partly because of it), Sanger is now the NYT’s chief Washington correspondent.

More instructive still, in May 2005, when first-hand documentary evidence from the now-famous “Downing Street Memorandum” showed that President George W. Bush had decided by early summer 2002 to attack Iraq, the NYT ignored it for six weeks until David Sanger rose to the occasion with a tortured report claiming just the opposite.  The title given his article of June 13 2005 was “Prewar British Memo Says War Decision Wasn’t Made.”

Against this peculiar reporting record, I was not inclined to take at face value the Jan. 7, 2017 report he co-authored with Michael D. Shear – “Putin Led a Complex Cyberattack Scheme to Aid Trump, Report Finds.”

Nor am I inclined to take seriously former National Intelligence Director James Clapper’s stated views on the proclivity of Russians to be, well, just really bad people — like it’s in their genes.  I plan to avail myself of the opportunity to discover whether intelligence analysts who labored under his “aegis” were infected by his quaint view of the Russians.

I shall ask any of the “handpicked” analysts who specialize in analysis of Russia (and, hopefully, there are at least a few): Do you share Clapper’s view, as he explained it to NBC’s Meet the Press on May 30, 2017, that Russians are “typically, almost genetically driven to co-opt, penetrate, gain favor, whatever”?  I truly do not know what to expect by way of reply.

End of Day One

In sum, my priority for Day One is to hear both sides of the story regarding “Russian hacking” with all cards on the table.  All cards.  That means no questions are out of order, including what, if any, role the “Steele dossier” may have played in the preparation of the Jan. 6, 2017 assessment.

I may decide to seek some independent, disinterested technical input, as well.  But it should not take me very long to figure out which of the two interpretations of alleged “Russian hacking” is more straight-up fact-based and unbiased.  That done, in the following days I shall brief both the Chair, Devin Nunes (R-Calif.) and ranking member Schiff of the House Intelligence Committee, as well as the Chair and ranking member of its counterpart in the Senate.  I will then personally brief the NYT’s David Sanger and follow closely what he and his masters decide to do with the facts I present.

On the chance that the Times and other media might decide to play it straight, and that the “straight” diverges from the prevailing, Clapperesque narrative of Russian perfidy, the various mainstream outlets will face a formidable problem of their own making. Mark Twain put it this way: “It is easier to fool people than it is to convince them they have been fooled.”

And that will probably be enough for Day One.

Top Photo | Ray McGovern, center, and Ann Wright, right, with the Bush Crimes Commission try to deliver to the White House in Washington, Sept. 13, 2006, to President Bush. The citizens’ Commission of Inquiry concluded its year-long investigation into whether the Bush administration has committed war crimes and crimes against humanity. White House officers refused the item and ask them to mail it to the White House. (AP/Ron Edmonds)