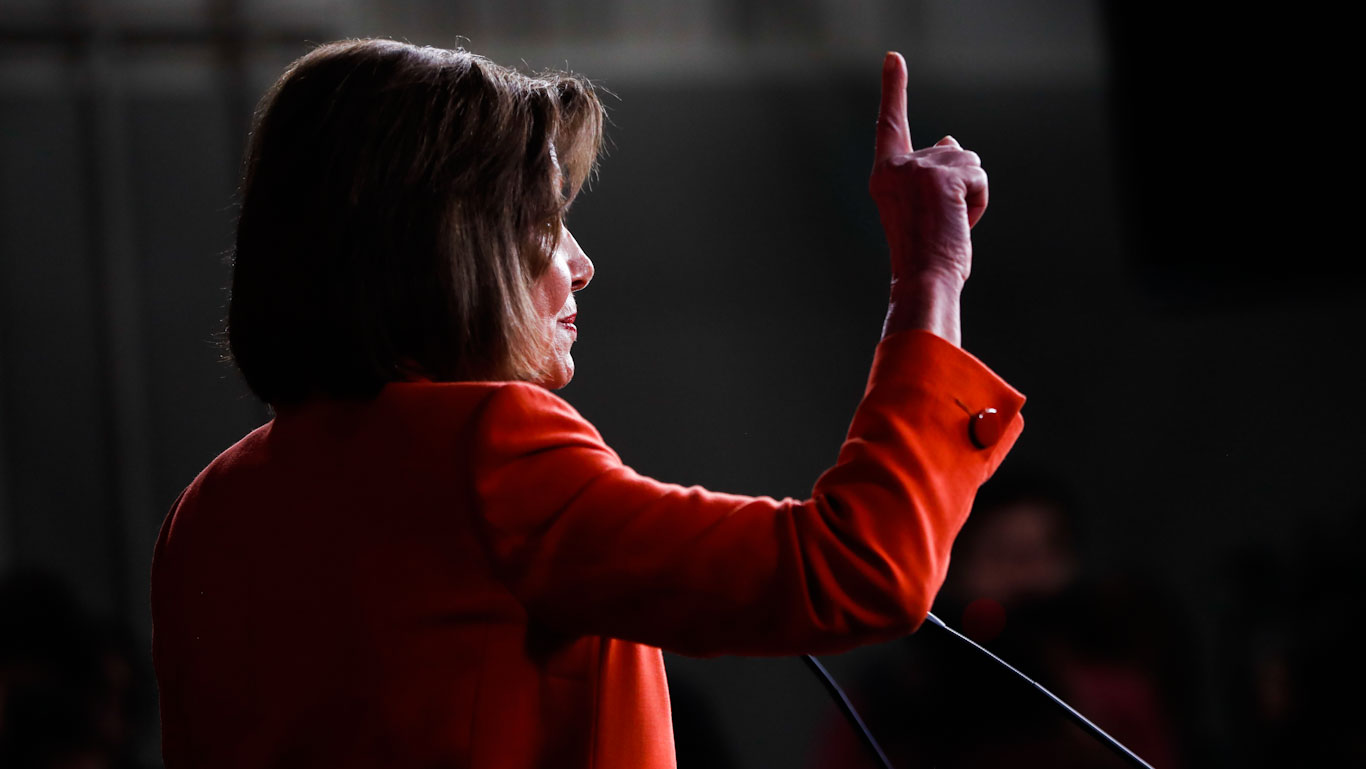 Pelosi’s objections to progressive legislation like a wealth tax or Medicare for All are based not on pragmatic concerns about losing votes (quite the opposite appears to be true) but have more to do with her position as one of America’s richest people.

Speaking at a roundtable of reporters and editors at business network Bloomberg November 1, Speaker Nancy Pelosi had a strong message for Bernie Sanders and other Presidential nomination hopefuls who endorse Medicare for All: “What are you thinking?!” The 79-year-old Californian characterized the idea as virtual political suicide, claiming that it may poll well in liberal circles but will fall flat in battleground states crucial to securing a 2020 victory against the incumbent Donald Trump. “As a left-wing San Francisco liberal,” she warned, “what works in San Francisco does not necessarily work in Michigan,” adding that many Americans would be sorry to lose their private health insurance plans.

There are fair grounds to treat this advice with suspicion. Two late 2018 polls from Reuters and Harris found that at least 70% of Americans supported universal healthcare (including a majority of Republican voters). Thus, Medicare for All could become a huge vote winner, attracting both non-voters and many in Trump’s base.

Gauging the lack of health coverage in the United States is not a simple task, but a recent Gallup poll suggests about one-seventh of the adult population has no health insurance whatsoever. Regardless, America spends around twice as much on health per capita as comparable countries, with inferior results. Medicare for All has been forced into public consciousness by the campaign of Bernie Sanders, although it has been embraced, with varying degrees of enthusiasm and authenticity by other candidates, including Tulsi Gabbard, Elizabeth Warren, Kamala Harris, and Andrew Yang. The plan would create a system not unlike those existing in most of the countries in Europe and the developed world.

During the interview, Pelosi also refused to endorse a wealth tax like that proposed by Sanders and Warren, instead, calling for a “bipartisan” solution to the issue. Given the Republicans’ record, this may essentially amount to calling for a tax cut. Pelosi may have her own reasons to oppose leftist policies like tax increases for the super-wealthy. She receives a yearly salary of over $223,000 for her position as Speaker of the House of Representatives, making her the third highest-paid elected official in the U.S., behind only the President and Vice-President. But this is dwarfed by the $120 million net worth of her and her business tycoon husband Paul, who owns enormous real estate ventures across California and large stakes in Facebook, Apple, Comcast, and Disney. Paul Pelosi is also a regular attendee of the shadowy, elitist Bohemian Grove Club, the subject of many lurid conspiracy theories.

Despite this, she continues to present herself as a left-winger concerned that certain Democrats are being too radical by proposing a system like Medicare for All. “Protect the Affordable Care Act — I think that’s the path to health care for all Americans. Medicare For All has its complications,” she said, claiming, “the Affordable Care Act is a better benefit than Medicare.” This, “I’m a liberal but” is a common trope in bad-mouthing left-wing proposals, with Pelosi expertly combining it with the “this is how Trump will win” tactic as well, where conservatives offer leftists supposedly good-faith advice on how to prevent another Trump victory. A tactic that always seems to include embracing conservative politics. Fox News particularly likes the “I’m a liberal but” trope when it comes to healthcare, allowing self-styled liberals to warn readers that Medicare for All is “not the answer” but a “pie-in-the-sky idea” and claim that it would “put the government in charge of making decisions about your health” and your body.

Likewise, the conservative Washington Examiner warns the “left-wing elites” that their lurch towards socialism is alienating the vast majority of Americans. They must, therefore, do the only “pragmatic” thing to beat Trump and choose Joe Biden. This tactic is so ubiquitous that even Donald Trump Jr. offered supposedly good-faith advice to those trying to beat his father. Writing in The Hill, he advised that the “radical left” “extremists” must not be allowed to undermine the “moderates” like Pelosi. Otherwise, he would be extending his stay in the White House.

While Pelosi’s attitude towards Medicare for All does not reflect that of the party’s membership or base (90% of those who offered a response in 2018 supported it), Bloomberg does accurately note (emphasis added) “The speaker’s concerns reflect those of many Democratic leaders and donors.” And that is precisely the issue. There is very much a battle raging for the soul of the Democratic Party, with a host of outsiders and new challengers taking on the entrenched elite, represented by the likes of Pelosi. She has been embroiled in a very public battle with members of “the Squad”, including Ilhan Omar and Alexandria Ocasio-Cortez (AOC), who represent a more left faction in the party. The feud took a back seat only after Donald Trump began personally attacking Omar in front of cheering crowds chanting “send her back.”

A battle for the Democratic Party’s soul

Yet the battle between the establishment Democrats and the new challengers may be a longer and more bitter struggle, involving a decision over what the future of the party will look like. Will they continue to accept corporate donations? Will Medicare for All be considered a political litmus test for office? For many in the movements that propelled the Squad into office, the 17-term Pelosi represents the corrupt old wing of the Democrats who did so much to prevent Sanders from achieving the nomination in 2016. And now, in 2019, it continues to undermine his bid at every turn.

Pelosi is being primaried in her congressional district by 45-year-old civil rights lawyer and self-described Democratic Socialist Shahid Buttar, who is putting progressive legislation like Medicare for All and the Green New deal at the forefront of his campaign. Buttar’s attempt to unseat Pelosi was sparked by his disgust at her support for Trump’s ICE crackdown on immigrants and an increase in funding for border patrol agents. Over the strong objections of the party’s new left wing, the Democrats essentially rubber stamped Trump’s plans.

Yet corporate media are not presenting the situation as a battle between left and right wings of the party, but as a battle between the left and the default position, assigning an ideology to AOC, Omar and Sanders, but not to Pelosi, as if she was above bias and driven only by logic and reason, consistently referring to her beliefs and positions as “pragmatic.” And while Pelosi continues to pour cold water on universal healthcare, media continue to attack the idea with a relentless torrent of negative articles. The New York Times tells us “don’t get too excited for Medicare for All.” The Wall Street Journal described it as a “false promise.” The Hill warned it would be “wildly expensive,” while the Washington Examiner claims it would be “cruel and dysfunctional.” Other outlets have described it as “politically impractical”, a “populist bromide”, a “preposterous proposal”, a “trap for businesses and employees”, “fool’s gold” and a “singularly bad idea”. USA Today summed up the message: Medicare for All is “all wrong for America.”

Ultimately, Pelosi’s objections to progressive legislation, like a wealth tax or Medicare for All, are based less on the pragmatic concerns about losing votes (quite the opposite appears to be true) and have more to do with her position as one of America’s richest people, and the fact that she has pocketed millions from healthcare and pharmaceutical corporations in the form of contributions. If Medicare for All really is as popular as it seems, and if the left can continue to gain support, she may not be in power much longer; her primary is on March 3.