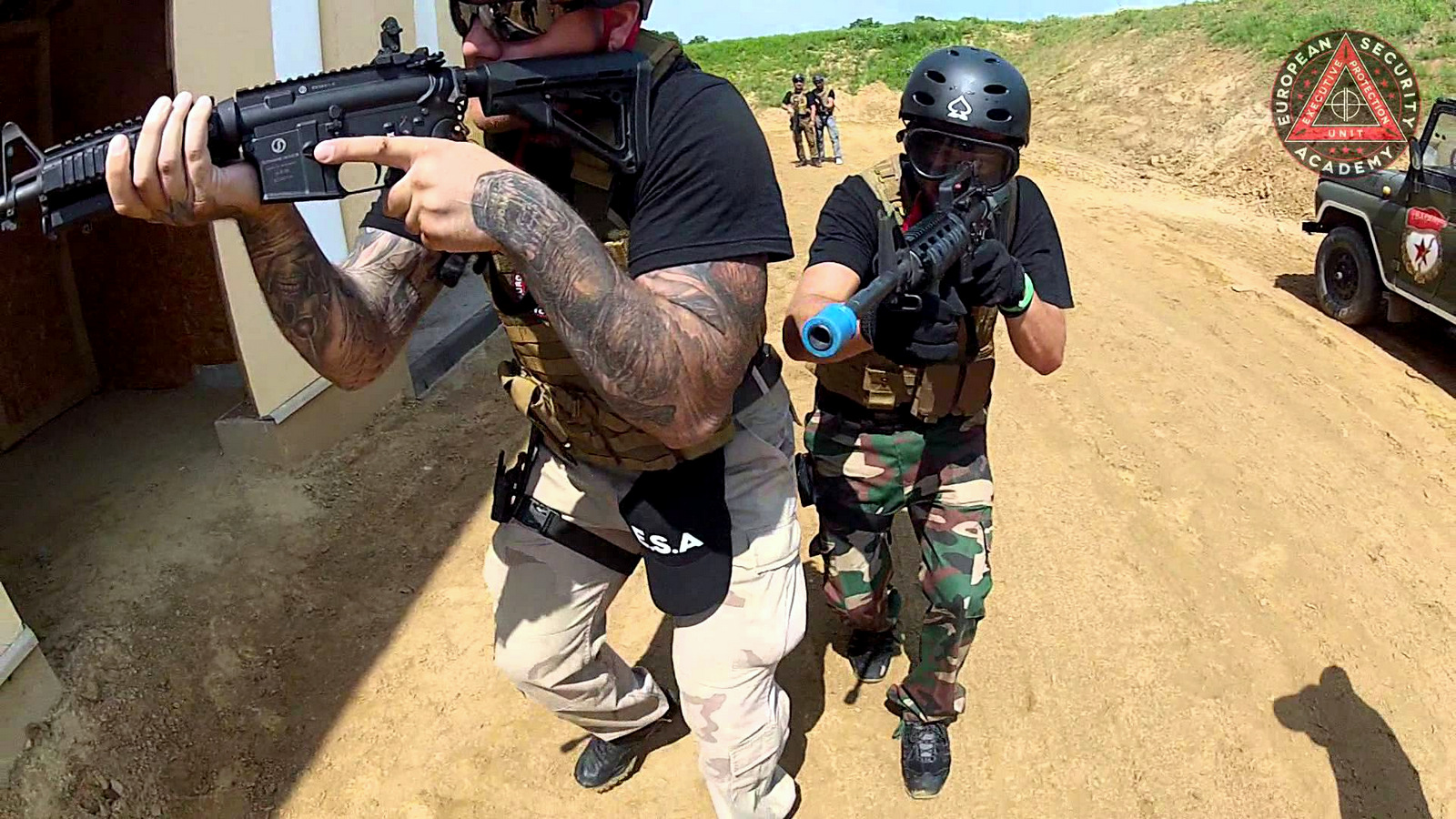 ‘For too long this murky world of guns for hire has been allowed to grow unchecked. In letting the industry regulate itself, the government has failed,’ the executive director of War On Want tells MintPress.

Private military firm, European Security Academy, carries out a training exercise.
Britain’s $560 million a year mercenary industry is booming as governments and corporations seek to ‘evade responsibility for the use of violent and often deadly force.’ (Photo: YouTube Screenshot)

LONDON — In a new report, a British anti-poverty charity puts Britain at the center of a growing global mercenary industry worth around $560 million to companies in the United Kingdom alone.

The U.K.’s Foreign and Commonwealth Office, for example, has awarded contracts to PMSCs in conflict zones with a combined value of around $70 million each year since 2003. This includes nearly $210 million in the five years between 2007 and 2012 awarded for operations in Iraq.

“From dependency on Pentagon contracts, they [PMSCs] have found a wealth of new and eager clients amongst the private sector, especially in the extractive industries. They have sought out and exploited political instability in the wake of the Arab uprisings. And they have spread floating armories across the world’s oceans to protect commercial shipping interests. In all of this, U.K. companies are playing a leading role, reaping enormous profits.”

In its report, War On Want says the use of private armies by foreign governments and corporations is increasing rapidly because “states and companies seek to evade responsibility for the use of violent and often deadly force.”

According to an earlier War On Want report in 2006, a proliferation of security firms led to human rights abuses, a flourishing weapons trade and political destabilization. The latest briefing provides an update on the situation, noting that hundreds of new PMSCs have been established in recent years in a secretive industry worth hundreds of billions of dollars.

War On Want argues that the U.K. government could be complicit in the aforementioned crimes because it has allowed mercenaries to regulate themselves.

John Hilary, executive director of War On Want, told MintPress News that the time has come to ban these companies from operating in conflict zones:

“Now we are seeing the alarming rise of mercenaries fighting on the front line in conflict zones across the world: it is the return of the ‘Dogs of War.’ For too long this murky world of guns for hire has been allowed to grow unchecked. In letting the industry regulate itself, the government has failed; only binding regulation will do.”

Many leading PMSCs are sprawling corporate entities, the War On Want report explains, adding that companies such as G4S (which acquired ArmorGroup in 2008), Aegis Defence Services (now part of GardaWorld), Control Risks and Olive Group, make hundreds of millions of dollars in profit each year from the industry and “come complete with PR departments and marketing teams.”

No fewer than 14 British PMSCs are based in Hereford, England, close to the headquarters of the British army’s Special Air Service (SAS), while at least 46 PMSCs in the U.K. employ former members of the British special forces.

While the report focuses on British firms, it also highlights the close links between the U.K. and the United States within the private security industry.

Control Risks is a London-based security firm that operates in war zones around the world. Most of its staff, like Jim Brooks, are former members of the military and intelligence community.

The report notes that Brooks, the CEO of the American arm of Control Risks, “is ex-CIA, and worked for the agency supporting its worldwide paramilitary operations, and as a Navy SEAL advisor to Latin American security services.”

Control Risks declined to comment for this story, but a statement on its website outlines its expertise as “an independent, global risk consultancy specialising in helping organisations manage political, integrity and security risks in complex and hostile environments.”

Echoing that, a statement sent to MintPress by G4S, the world’s largest private security company, which the report notes for its complicity in the Israeli occupation of Palestine and concerns about its operations in Iraq, maintains:

The War On Want report says that as the large-scale military occupation of Iraq by American and British troops wound down, PMSCs expanded in scope.

“Security operations which were once the preserve of the occupying armed forces were outsourced, with UK companies remaining key players,” the report notes, adding that Aegis Defence Services is “one of several PMSCs under contract from the U.S. military providing services to the Pentagon’s program for training and equipping Iraqi security forces under the Office of Security Cooperation’s Iraq program.”

Contracts in the Middle East have brought huge profit increases to PMSCs, and War On Want points out that many, including Control Risks, have been hired to protect the oil and gas sector in Iraq.

War On Want also mentions Academi, the U.S. mercenary firm founded by Erik Prince, formerly known as Blackwater. The report states that “hundreds of Colombian mercenaries recruited by the infamous US PMSC Blackwater (now renamed Academi) have been fighting alongside Saudi Arabian forces in Yemen.”

Private military contractors are being increasingly employed to police the world’s waterways.

The report notes that PMSCs have shot at vessels at sea, sometimes resulting in the deaths of innocent fishermen. One captain working in the Indian Ocean told War On Want: “It’s the Wild Wild West out there. There are no regulations or vetting process for these teams. The company doesn’t know who it’s getting on board.”

At a 2012 shipping conference, Thomas Rothrauff, president of the Virginia-based Trident Group, played a video of armed personnel firing without warning on two skiffs approaching their vessel in the Indian Ocean the previous year, and, according to War On Want:

“[He] acknowledged that those on board were probably killed, although the exact extent of injuries and the real intent of those in the skiff remains unknown: ‘We’re not in the business of counting injuries,’ he said.”

After the video leaked, Bloomberg reported that it “highlights a lack of rules governing the use of weapons on the high seas amid questions over how much force is legal and necessary to fight Somali piracy attacks.” Reporters also noted that it “risks a Blackwater moment,” referring to the 2007 incident in which Blackwater Worldwide employees opened fire, killing civilians in Baghdad.

Watch the leaked video that shows Blackwater contractors in Iraq running over a woman with a car, smashing into cars to move them out of the way and firing a rifle into traffic:

In a statement to MintPress, Trident Group said War On Want’s reference to the company in its report was fragmentary, drawn entirely from a “grossly inaccurate secondary source,” and “all but flatly asserts that Trident Group subcontractors committed murder.”

“Nothing could be further from the truth. Far from the callous, unprovoked mayhem implied by the Bloomberg article – and swallowed whole by the War On Want report – Trident Group’s subcontractors acted with restraint, and in full compliance with established rules of engagement,” the statement continued.

Trident Group pointed out that it has been a signatory company to the U.N. International Code of Conduct since 2009 and continues that status to this day.

Further, the report also explains how PMSCs exploit a legal loophole when it comes to use of arms in international waters by making use of floating armories. These ships are harbored at sea, stocked with high-power rifles, ammunition, night-vision goggles and other military-grade material.

The U.K. Department of Business, Innovation and Skills has issued 50 licenses for floating armouries operating in the Indian Ocean and Gulf of Aden, according to a December 2014 report from the Omega Research Foundation.

And, as the report warns, PMSCs on these floating armories in international waters “can operate without fear of legal repercussions.”

Academi, Control Risks, Olive Group and the U.K. government all declined to comment for this article.