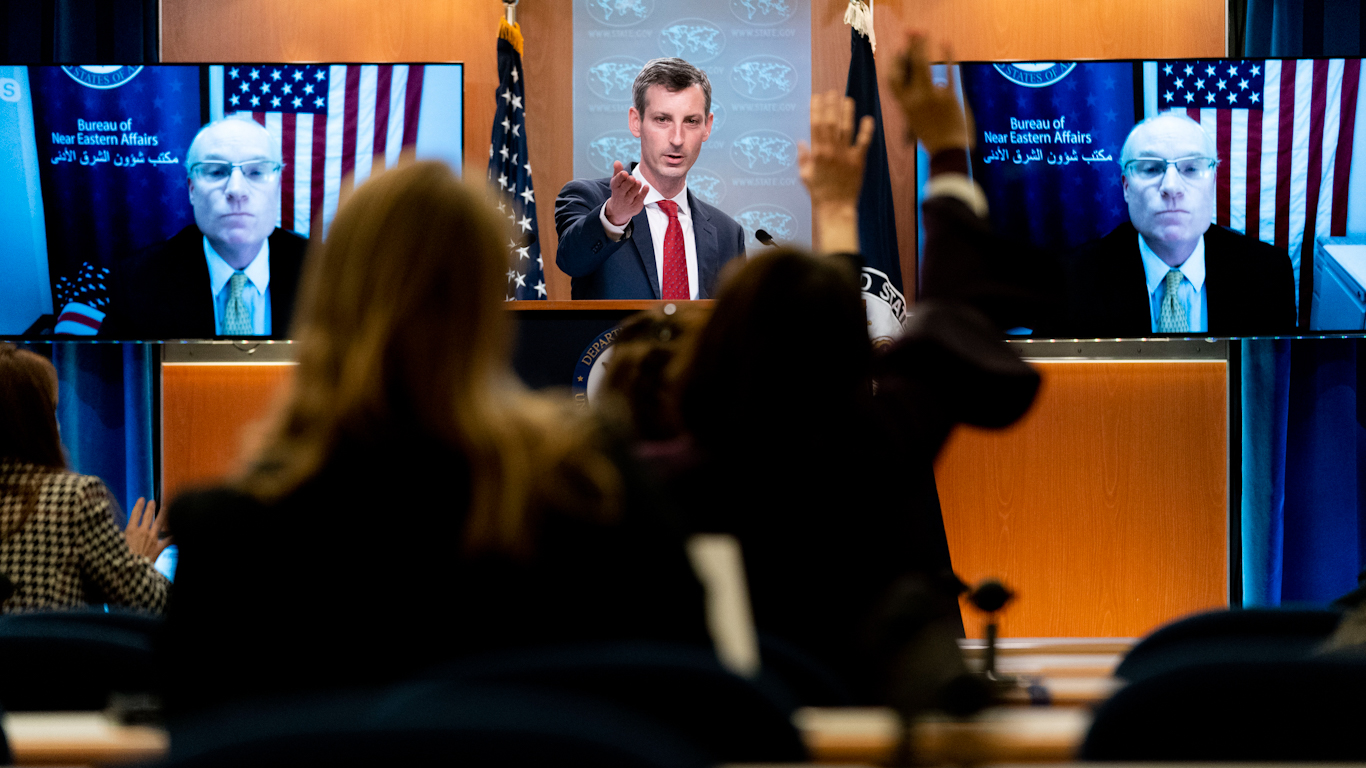 Thousands of Yemenis held rallies in cities across the country demanding hunger not be used as a weapon by Saudi Arabia and the United States in order to bring locals to their knees.

ADEN, YEMEN — “The prices are skyrocketing. We can’t feed our children. They are starving,” Saher Abdu Salem, a government employee and a mother of five, said as she participated in a protest in Aden against Saudi Arabia and the government of ousted Yemeni President Abdul-Mansour al-Hadi. The protests took place at the Aden port this week in the wake of a recent decision by the Saudi-backed government in Aden to raise the U.S. dollar exchange rate for major life-saving goods. Now Saher and her husband are struggling to feed their family in the coastal city where the price of the staple ‘rooti’ loaf of bread has soared 250% in a month, its portion halved in size. “When the U.S. State Department expresses its concern over us, this means that it will deal a new blow to our hungry stomachs,” she said.

In this recent development, the oil-rich kingdom has raised the U.S. dollar exchange rate used to calculate customs duties on essential goods that enter Yemen, a country grappling with what the United Nations says is the world’s largest humanitarian crisis, with millions facing famine. The decision, which has been adopted by the ousted president’s government, has quickly been put into effect and has doubled customs tariffs for major goods and products that enter from the ports controlled by the Saudi-led Coalition.

In the wake of the Saudi decision, the price of essential goods has been doubled, particularly in Aden, Hadramout, al-Mahrah and all southern provinces occupied by the Saudi-led Coalition. In Aden, prices of oil, sauces, vegetables and fruits have more than tripled. The hike in duties from 250 to 110 Yemeni Riyals to the dollar applies to basic commodities such as flour, sugar, cooking oil, rice, milk, fuel and medicine.

According to the United Nations and local humanitarian bodies working on the ground, the move has already aggravated the humanitarian crisis in the war-torn country where more than 80% of the population is reliant on imports. On Wednesday, a report issued by the United Nations Office for the Coordination of Humanitarian Affairs in Yemen said that the Yemeni riyal in “the areas of the internationally recognized Yemeni government” (referring to the Saudi-backed government of al-Hadi) has lost more than 36% of its value within a year, causing prices to rise. Moreover, the move has spread fear among Yemeni families who are struggling against floods, COVID-19 and other diseases.

The World Bank has said that about 70% of Yemenis are at risk of starvation at a time when the country’s gross domestic product (GDP) has been halved since 2015, when the war began. The World Bank added, in the report published on its website, that “food prices have also risen due to the suspension of commercial imports and the resulting shortage of supplies, and the depreciation of the Yemeni riyal, which currently barely exceeds a third of its 2015 value.”

Thousands of Yemenis held rallies in cities across the country demanding hunger not be used as a weapon by Saudi Arabia and the United States in order to bring locals to their knees. In the Saudi-controlled south and east of Yemen — where separate protests have broken out recently over frequent power cuts and the deterioration of health services, in light of the spread of COVID-19 and non-payment of wages — hundreds took the street in Aden, Abyan and Taiz, and al-Shehr ports located in al-Mahrah.

Meanwhile, many traders, importers, and related workers refused to acquiesce in the Saudi decision and instead went on strike. “This decision is a disaster for all Yemenis, and we have been on strike since Eid al-Adha,” Wael Gabr, a merchant who went on strike along with dozens of his peers at the al-Shahr port in al-Mahra, said. The Chamber of Commerce and Industry, based in Aden, also rejected the decision and warned of its repercussions.

Food prices have spiked sharply in the southern governorates since June 2020 thanks to Saudi mismanagement, according to the World Bank, which reported that the national average cost of a Minimum Food Basket (MFB) rose to YR 41,950 (about $63) in June, 4% above the MFB in May, driven by the large depreciation of the rial. The MFB cost increased, month to month, by 18% in Aden, 13% in Lahji and 11% in Dhalee, impacting southern households. In sharp contrast, the MFB cost declined markedly by 7% in Sana`a and remained stable in most other northern governorates, despite acute fuel shortages.

In Sana`a, where the Ansar Allah-led government has been able to maintain a stable exchange rate, thousands of people took the street on Sunday in Bab al-Yemen southeast of the city. There, protesters voiced slogans and chants against both Riyadh and Washington, expressing deep dissent over the recent rising rate of customs tariffs imposed by Saudi Arabia. “Nothing happens without the knowledge or consent of the United States,” Gabriel Ahmed said, as he joined with others chanting the slogan “Who is behind the decision…? America! America!”

We consider raising the price of the customs dollar a pre-planned American decision by President Biden`s administration itself and implemented by the puppet tools in Aden. And we hold America responsible for exposing civilians in all Yemeni governorates to starvation, and we hold it responsible for using the siege of starvation as a weapon of war against the Yemeni people.”

In a speech to the protesters, Mohammed Ali al-Houthi, a high-ranking leader in the movement, said that the U.S. is constantly trying to depreciate Yemen’s rial against the American dollar in a move similar to its efforts in Syria, Palestinians and Lebanon: “It is the U.S. that has put a blockade against our country and killed our people. Saudi Arabia and the UAE are nothing more than tools for implementing U.S. schemes and agendas.”

This step — which came as part of the maximum pressure campaign exercised by Saudi Arabia and supported by the Biden administration, to bring the Yemenis to their knees — coincides with another step no less dangerous than rising tariffs. In July, Saudi Arabia began a new campaign to purge the kingdom — particularly its southern governorates of Asir, Jizan, and Najran — of Yemeni nationals, including workers and academics, in a move that will not only exacerbate Yemen’s humanitarian crisis, social instability and armed conflict for years to come, but also undermine whatever possibility remains of the Yemeni Republic emerging from this war intact, according to a recent report from Sana`a Center for Studies.

However, Yemenis are not giving up. Ansar Allah, which has led the resistance against the Saudi-led war, announced that they will continue to fight the Saudi Coalition, despite the economic pressures, until Saudi Arabia and its allies end the war, lift the blockade, and leave the country. Abdulmalik al-Houthi, the leader of Ansar Allah, said on Monday, “When Washington and its allies speak of peace, they mean others must surrender to their demands.” He concluded, “We are ready for peace, not surrender, and we will resist by all available means.”