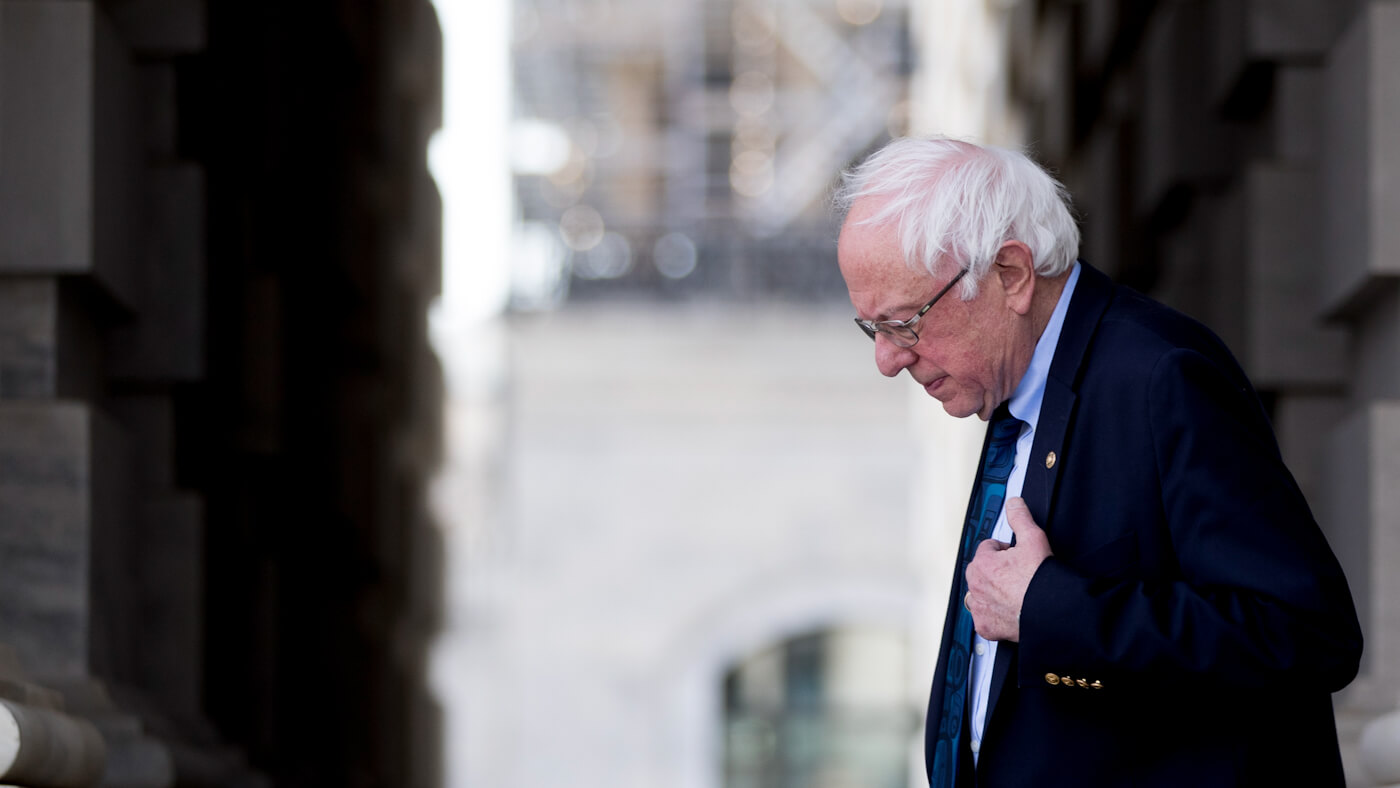 On February 19, Bernie Sanders announced his candidacy for the presidency in an email to supporters, assuring them that his platform continues to be what so strongly resonated with younger voters and pushed the Democratic Party to the left. It includes universal healthcare, an hourly minimum wage of $15, and free public college tuition.

While mainstream media is consumed with covering the Democratic nomination horse-race, political comedian Lee Camp, host of Redacted Tonight, would rather cover the ideas that underpin Sanders’ run and keep track of a media establishment that will attempt, as it did in 2016, to thwart him at every turn. From Camp’s weekly show:

I prefer to talk about ideas, because ideas matter, and many of Bernie’s ideas are scary to the ruling elite…The point is, these ideas are not what your corporate rulers want to hear. That’s why they want you to think that these ideas are terrible ideas, toxic ideas.”

Camp went on to cite some examples of the jaundiced coverage. First up was his take on an MSNBC segment refuting Sanders’ policies by outlining the horrors of socialism. MSNBC contributor Rick Tyler seems an odd person to be tasked with the job of deflating floats in the Bernie Parade, as he was the communications director for Ted Cruz 2016. This little piece of context was left at the doorway to the set from which Tyler’s criticism spewed forth, as all corporate news sets are context-free zones — complete with a delousing chamber, if necessary.

Criticism from Rick Tyler should be laughed off by Sanders’ supporters, in much the same way that Trump-supporting uncles everywhere laughed off their woke nieces’ and nephews’ criticisms about the whole “hating Mexicans” policy. These uncles don’t care about eh Mexicans. Trump convinced these uncles that Mexicans are stealing their jobs.

It’s especially problematic as MSNBC dresses itself as the Pepsi to Fox News’ Coke. They taste the same to different viewers. MSNBC leads the #Resistance, yet they only resist Trump, which is like shooting fish in a barrel, and actually shift people to the right by having “never Trumper” Republicans as part of their panel. Yes MSNBC, the same channel that gave Donald Trump free airtime and convinced people that the war criminal Hillary “We came, we saw, he’s dead” Clinton (referring to Muammar Gaddafi) was a solid liberal alternative to Trump.

The American people, when voting, often face two buttons: Same or Different. Since life is never, never good in 21st century America — especially after the financial crisis, in the weeds of which the vast majority of us remain mired — voters can’t be blamed for hitting the ‘Different” button. They hit the “Different” button for Obama in 2008 and — since his presidency will go down in history, at best, as a well-intentioned failure — in 2016 the people slammed the “Different” button again, but only after the DNC conspired to make sure only one “Different” button made the general election. I think my analysis withstands scrutiny, however many hand-wringing pollsters, who study the people who either voted Obama then Trump or Bernie then Trump, tell me I’m wrong. The corporate duopoly stopped the one potentially anti-corporate candidate cold.

If you want to be anything other than a center-right news station that happens to tell marginally more facts than your coked-out alternative, then don’t have the person tasked with making Ted Cruz appear human tell us why Bernie Sanders isn’t a tenable solution. The only allegiance Rick Tyler has isn’t to the American people, it’s to a sack with an NBC peacock and a dollar sign on it.

Lee Camp points out what happens when gotcha journalism turns out as friendly fire: “ As Rick Tyler continues his anti-socialist tirade, the co-host accidentally trips him up.”

She mentions Sweden because that simple invocation smacks Rick Tyler’s house of talking-point cards to the floor. Without a doubt, if America were to embrace socialism with Bernie heading the charge, it would look like Sweden and not the autocratic regimes of Mao, Pol Pot and Stalin. The words “Chairman Bernie” or “Generalissimo Sanders” are even more ridiculous sounding than “President Trump” which, you must admit, we’re all still getting used to.

To check on the “nightmarish” situation in Sweden, one could look no further than the World Happiness Report, where countries embracing the Nordic model (social democracies with hybrid systems of both capitalism and socialism) perpetually enjoy the top spots. They are the happiest countries in the world.

It’s not the lack of heat and daylight, the fermented fish, or the general attractiveness of the population that makes them so happy. The fish, cold, and darkness speak for themselves, and attractiveness is self-diluting, as any prom-queen from upstate New York can attest to following a move to the Big Apple. The answer must then lie within the Nordic countries’ social systems themselves. For those who were educated in the U.S. public school system, as I was, it’s important to make it clear that Sweden is a Nordic country.

Camp has a great response to the charges levied against socialism for killing millions of people. That capitalism has killed millions more. In addition to citing a Guardian article that states that capitalism is founded quite literally on slavery, Camp also goes on at some length to show the toll the ‘08 financial crisis has had:

Capitalism has killed millions upon millions. For a tiny example, the more than 10,000 suicides tied to the 2008 economic crisis alone. Every day, people take their lives or die from preventable diseases because of unfettered capitalism. The UN estimates that it would take $30 billion to end world hunger, but we don’t do that, because capitalism is not down with that, man…and it’s always the good people that die too and it’s the shit stains like Dick Cheney can have four heart attacks with their gold-plated healthcare. He has the heart of a ten year old… Literally.”

Watch | The corporate media against Bernie Sanders & fear-mongering at CPAC