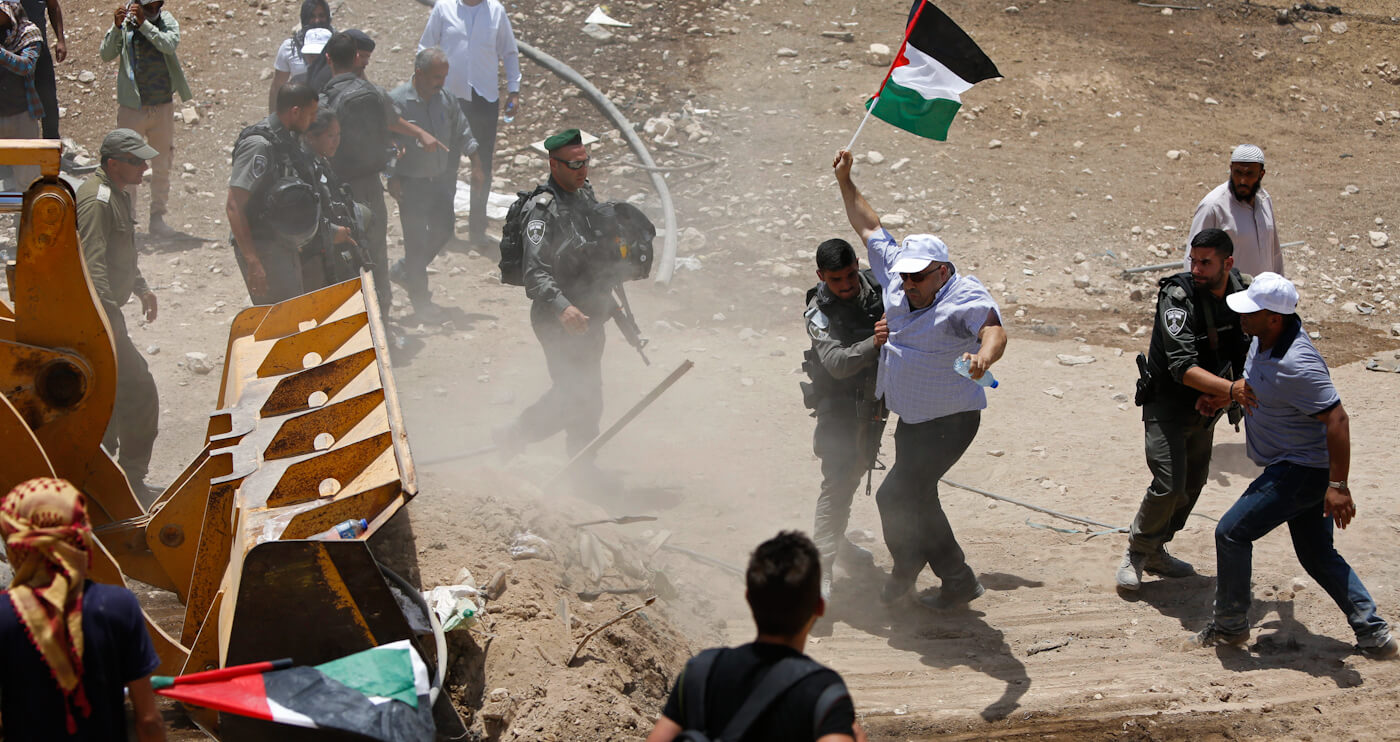 Israeli settler groups are turning the Israel-Palestine narrative on its head, accusing Palestinians of trying to illegally steal land in the West Bank’s Area C.

Regavim claims that there is a Palestinian take over of Area C and that the Israeli government is not doing enough to fight it. The organization’s PR stunt, shown in the video below, was in their own words “an in-your-face challenge to the הכנסת (Knesset) to enforce the law and halt the de facto creation of a terrorist state in the heart of Israel.”

Regavim also published, “a comprehensive, in-depth report” titled, “The Roots of Evil, Land Theft in Area C is Creating a De Facto Palestinian State.” In the report, the group claims that it has exposed a “secretive program undertaken by the Palestinian Authority, with massive financial support provided by the European Union, European governments, and other foreign interests.” The secret program, which Regavim has dubbed “The Roots Project,” is allegedly a systematic program of land theft by Palestinians which targets areas placed under full Israeli jurisdiction by the Oslo Accords and international law. The report alleges that the PA is taking advantage of a legal loophole in order to effectively annex territory throughout Judea and Samaria (the West Bank) through seemingly-innocuous agricultural projects.

“Regavim’s report indicates that the response of the Israeli authorities, including the government, the Civil Administration, and the Ministry of Foreign Affairs, has been extremely phlegmatic, and often non-existent. The Civil Administration, which is responsible for the protection of Israel’s land resources in Area C, addresses this illegal activity on a case by case basis, and for all intents and purposes does not take steps to stem the tide of creeping annexation,” the report reads.

In case it wasn’t clear from the outset, the claim being made by Regavim is that the Palestinians are attempting to annex lands that belong to Israel.

Regavim is a right-wing religious settler organization which claims its mission is “to ensure responsible, legal, accountable & environmentally friendly use of Israel’s national lands and the return of the rule of law to all areas and aspects of the land and its preservation.” That is the English version. In Hebrew, the group’s mission statement reads:

The mission of Regavim is to influence the State to act according to Zionist principles … to protect Jewish lands and natural resources and to prevent an alien takeover.”

One of the leading figures in the organization is newly appointed transportation minister, Bezalel Smutrich. Smutrich, who is also a member of the Israeli government’s inner “security cabinet,” is a proponent of the Third Temple movement which seeks to destroy the Al-Aqsa Mosque, the thrid-holiest site in Islam, and replace it with a Jewish temple.

But claims that Israel has a right to Palestinian lands are not only being made by fringe Zionist-religious groups. In a piece for Israel’s Hebrew-language journal, Hashiloach, former advisor to the Minister of Defense, Yaakov Eliraz claims that “outdated Israeli policy” is to blame for “Palestinian encroachment” into Area C. Hashiloach is funded by the Tikva Fund, a right-wing Zionist organization which counts among its speakers well-known U.S. neoconservative personalities Elliot Abrahms, John Bolton and Douglas Feith among others.

Area C represents 60% of the West Bank and for reasons beyond understanding, it was determined in the 1993 Oslo Accords that it would remain under full Israeli military control.  Eliraz, who has served three ministers of defense, says that the region is the heartland of Israel and blames the Israeli government for not doing enough to strengthen its hold on Area C and for allowing Palestinians to “build illegally” within the area.

Eliraz claims that Israel must define the strategic importance of Area C and make it clear that there is no guarantee it will be part of a future Palestinian state. It must act, he says,  to stop Palestinians from creating “facts on the ground” as he calls them and for Israel to define the lands within Area C as Israeli State Lands, an act that he asserts will end any dispute as to land ownership within Area C.

The Legacy of Khan Al-Ahmar

In his piece for Hashiloach, Eliraz mentions that in 2008, the Regavim Foundation made an appeal to the Israeli Supreme Court demanding that “illegal building by the Bedouins along the Jerusalem-Dead Sea highway be stopped.” At the time, European groups, particularly from Italy, had begun supporting this “illegal grouping.” They moved residents into actual homes instead of makeshift shelters, supplied them with solar panels and even built a modest school. Eliraz describes this as part of an attempt by the Palestinian Authority to undermine Israeli rights to connect the [Israeli] settlement of Ma’ale Adumim to Jerusalem.

Israeli settlers and the settler lobby are almost obsessed with Khan Al-Ahmar. The number of posts and tweets and articles about the need to evacuate this tiny, impoverished Palestinian community – one can hardly call it a village – is puzzling. In his monumental book, Palestine, a Four Thousand-year History, historian Nur Masahla writes:

The memory of the Palestinian caravanserai was preserved in the name of a small Palestinian Beduin village, al-Khan al-Ahmar, located between the Israeli settler colonies of Ma’ale Adumim and Kfar Adumim. This Palestinian village has been threatened with destruction by the Israeli state since 2010 in a plan to expand local Israeli settlements.”

The location of Khan al-Ahmar has served as an important monastic Christian community going back to the 5th century A.D. The ruins of the St. Euthymius and St. Martyrius monasteries, both dating back to the 5th century, Masalha tells us, “are located in the Israeli colony of Ma’ale Adumim.” Because of its unique location, Khan al-Ahmar would later serve as a Khan, or caravanserai for merchants and pilgrims. Today it has become an impoverished Bedouin community which Israel is desperately trying to destroy. In fact, Khan al-Ahmar has already been demolished several times by Israeli authorities only to be rebuilt by defiant residents who barely manage to hang on thanks to international attention.

According to journalist Orly Noy, “The story of Khan al-Ahmar is depressing in its banality.” The Jahalin Bedouin community who today reside in Khan al-Ahmar are originally from the Naqab desert in southern Palestine. They were forced to leave their land following the 1948 ethnic cleansing of Palestine. Noy writes:

They wandered to the Mishor Adumim area of the West Bank, which decades later was designated “Area C,” under full Israeli military control; the Jahalin, then, turned into an obstacle to settlement expansion.”

Even as brand new modern Israeli settlements were being built in the area offering modern living conditions at low prices to any Israeli willing to move there and populate the settlements, “the state,” Noy writes, “has refrained from providing them (the Bedouin Palestinians) with minimal living conditions.” The state did not connect them to water or electricity. “In fact,” Noy concludes, “Israel has done everything in its power to prevent the residents from taking their fate into their own hands.”

What Isreal describes as a Palestinian “land grab” is, in fact, Palestinians struggling to survive under the pressures of Israeli expansion. However, the entire discourse describes this and even Palestinian existence as a whole, as a violation of “Jewish rights.”

These are but two examples of the discourse now used by Israel and the frontline Zionist activists who aim to expel Palestinians and take over more lands within all of Palestine. It is worth mentioning that in Jerusalem the well-funded religious-Zionist group, Ateret Cohanim, has used successfully strong-arm tactics to purchase the Imperial Hotel in the Old City and now demands that Palestinian residents vacate the property. This is but one of many successful attempts by Ateret Cohanim to de-Arabize the city and eventually build a Third Temple in the place of Al-Aqsa Mosque and the Dome of the Rock.

What is noteworthy and worrisome is that the terminology used by right-wing Zionist groups places “Jews” and Israel as the ones whose rights are being denied and Palestinians as the perpetrators of injustice and so far their efforts have been successful and no one seems to be willing – or perhaps able – to stand up to them.