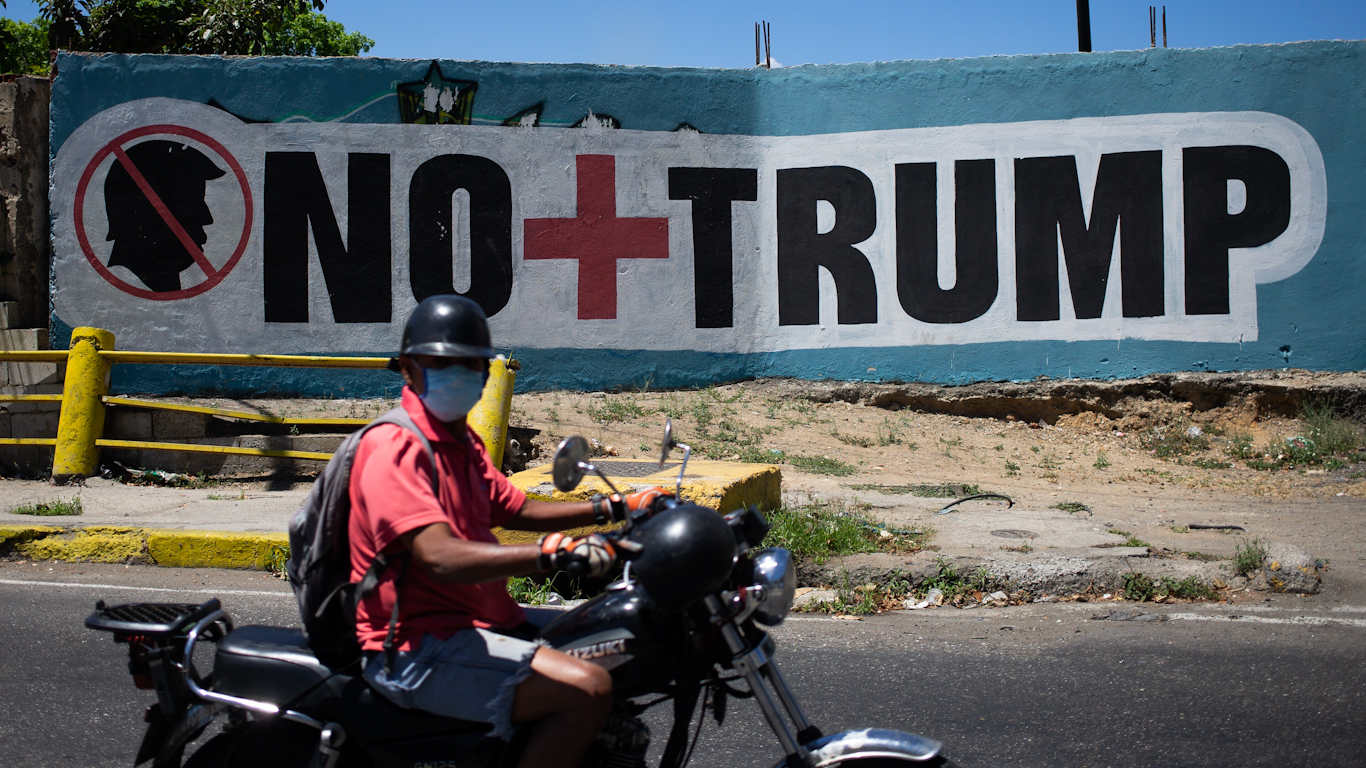 This latest escalation of the US hybrid war against Venezuela takes place amid a global pandemic, which the US apparently sees as an opportunity to further attack a people made more vulnerable by the health crisis.

According to the parable, the ungrateful son takes out a life insurance policy on his parents, murders them to collect, and is caught and found guilty. At his sentencing, the judge asks if he has anything to say on his behalf. The son replies: “Have mercy upon me because I am an orphan.” That’s chutzpah.

U.S. Attorney General Barr’s indictments on March 26 against the government of Venezuela for narcoterrorism go beyond chutzpah. For starters, William P. Barr was chief counsel for the CIA airline, Southern Air Transport, implicated in the 1980s for running illicit drugs and related narco-terrorism during Iran-Contra.

The U.S. charges of drug trafficking against Venezuela are the height of hypocrisy. The world’s leading source of heroin is U.S.-occupied Afghanistan and the U.S. is the world’s largest cocaine market.

The president of Honduras, Juan Orlando Hernández (JOH), is the latest in a line of corrupt presidents since the 2009 U.S.-backed coup there. JOH was identified as an unindicted co-conspirator in October by a US federal court for smuggling millions of dollars worth of cocaine into the U.S.

Colombia is the chief regional U.S. client state, distinguished by being the largest recipient of U.S. military aid in the hemisphere. Hillary Clinton called Plan Colombia a model for Latin America. Yet this model is the planet’s largest supplier of illicit cocaine. And that’s only scratching the surface of U.S. history of complicity in international narcotrafficking.

The false criminal charges by the U.S. government against fourteen high-ranking Venezuelan officials are for alleged involvement in international drug trafficking. The U.S. government has, in effect, put a $15 million bounty on Venezuelan President Maduro and bounties of $10 million each for the head of the National Constituent Assembly and other leading officials and former officials.

Thirty years ago, the U.S. posted a $1 million reward on the head of Manuel Noriega, then president of Panama, on charges of narcotrafficking. Noriega had long been a U.S. security asset assisting in the CIA’s dirty Contra war against the Sandinista government in Nicaragua. Noriega had also used his U.S. patronage to consolidate his rule in Panama as well as his ties with Colombian drug cartels. However, toward the end of his tenure, Noriega did not demonstrate a sufficient level of servility to his U.S. handlers and was deposed in the U.S. invasion of Panama in 1989, taking the lives of many uncounted civilians.

As RT warns: “The US indictment of Venezuelan President Nicolás Maduro and his subordinates on narcotrafficking charges echoes the rationale used to invade Panama and kidnap its leader.” Unlike the Noriega case, where the Panamanian president was convicted of massive drug trafficking with the knowledge and full protection of the CIA and other security agencies, the U.S. lacks evidence against the Venezuelans.

A reward poster for Nicolas Maduro released by the US DOJ on March 26, 2020

The U.S. claims that Venezuelan officials are conspiring to “flood the United States with cocaine” are thoroughly groundless. Even the Washington Office on Latin America (WOLA), a Washington-based think tank that supports regime change in Venezuela, found in a recent detailed report using the U.S. government’s own data that the facts do not support such bogus claims.

The authoritative U.S. interagency Consolidated Counterdrug Database reports, in fact, that 93 percent of U.S.-bound cocaine is trafficked through western Caribbean and eastern Pacific routes, not through Venezuela’s eastern Caribbean coast. Over six times as much cocaine flowed through the U.S.-allied Guatemala than Venezuela in 2018.

Yes, some illicit drugs do flow through Venezuela – a minor amount compared to those emanating from U.S. client states – but the culprits are criminal gangs that the very indicted officials are fighting. The coca is grown and manufactured into cocaine in neighboring Colombia, not Venezuela. While supporting U.S. government actions to undermine Venezuelan state institutions, WOLA recognizes: “Venezuela’s state institutions have deteriorated…In this environment, armed groups and organized criminal structures, including drug trafficking groups, have thrived.”

Yet WOLA’s conclusion is: “US government data suggests that, despite these challenges, Venezuela is not a primary transit country for US-bound cocaine. US policy toward Venezuela should be predicated on a realistic understanding of the transnational drug trade.”

The indictments against the government of Venezuela are a ramping up of a policy of regime change. Ever since Hugo Chávez was elected president of Venezuela in 1998 and launched the Bolivarian Revolution, the hostile U.S. government has floated consistently unsubstantiated accusations of narcotrafficking.

More recently the Trump administration has sought to replace the democratically elected president of Venezuela with a U.S.-chosen and groomed security asset. Juan Guaidó, the man anointed by Trump to be president of Venezuela, had never run for the presidency, nor served as president. He was unknown to 81 percent of the Venezuelan population at the time of his self-declaration as president. Besides these dubious qualifications, Guaidó collaborated with the right-wing Colombian drug cartel and paramilitary group known as Los Rastrojos and even posed for pictures with some of their operatives, which were posted on Twitter.

The ever-tightening unilateral coercive measures on Venezuela by the U.S. have created a blockade, costing Venezuela over 100,000 lives. Sanctions are not an alternative to war but an economic form of warfare and just as deadly. As such, unilateral economic sanctions are an explicit violation of international law under the charters of the United Nations and the Organization of American States and even under U.S. law.

Unfortunately, Venezuela is not alone. The rogue empire’s sanctions now blight a third of the world’s population in 39 countries.

This latest escalation of the U.S. hybrid war against Venezuela takes place within the context of the global coronavirus pandemic, which the U.S. empire sees as an opportunity to further attack the Venezuelan people made more vulnerable by the health crisis. Indeed, the State Department has declared “Maximum-pressure March” against Venezuela. In service of the empire, Twitter has closed the accounts of the Venezuelan ministries of health, science, education, and housing.

Meanwhile, Cuba, Russia, and China are all materially supporting the Maduro government’s successful efforts to contain the spread of COVID-19 in Venezuela. In contrast to this internationalist solidarity, the U.S. is in the midst of the largest war games in 25 years, Defend Europe 20, in contravention of World Health Organization quarantine protocols.

Words cannot sufficiently describe the inhumane perfidy of the U.S. empire’s response to the pandemic. This should be a time for the U.S. government to drop the unsupported indictments against President Maduro and other Venezuelan officials, to lift the inhumane and illegal sanctions on Venezuela so that Venezuela can purchase medicines and equipment to better fight the coronavirus pandemic and to restore normal relations with Venezuela based on respect for national sovereignty.

Feature photo | A man wearing a face mask as a precaution amid the spread of the new coronavirus passes a mural that in Spanish reads ” No more Trump” in Caracas, Venezuela, March 27, 2020. Ariana Cubillos | APm

Roger D. Harris is with the Task Force on the Americas, a human rights group working in solidarity with the social justice movements in Latin America and the Caribbean since 1985.