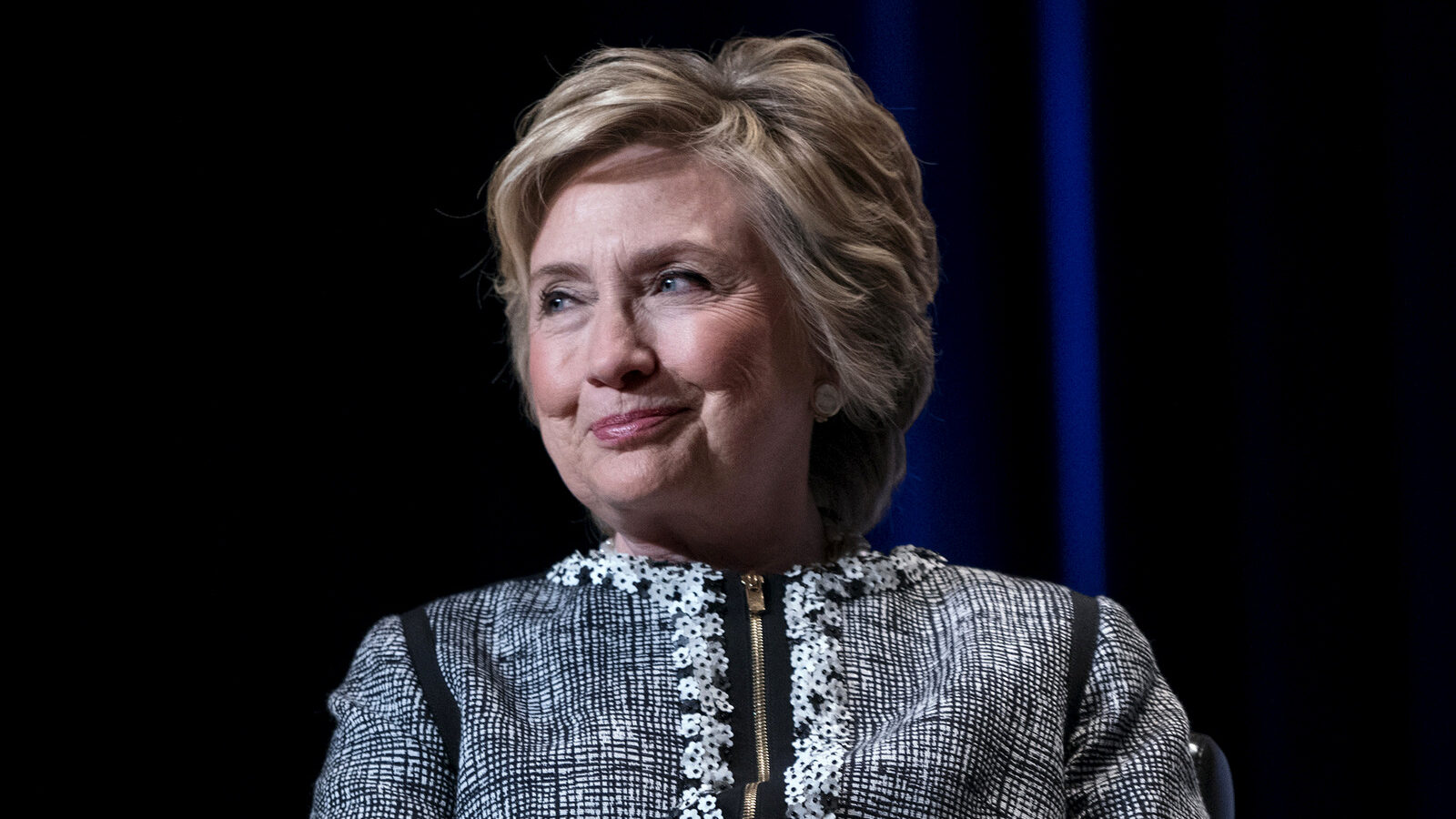 Clinton and her most loyal supporters in the Democratic establishment frustrated efforts to build a grassroots resistance that can take power and enact policies that serve poor and working class Americans.

Democratic Party leaders and liberal pundits make a big deal out of President Donald Trump’s tenuous grasp on reality. Trump is often described as a “post-truth” president. Yet, former secretary of state and Democratic presidential nominee Hillary Clinton has crafted her own alternative reality about why she lost the 2016 election.

This profound hubris, which Clinton intends to publish in a book, is reinforced and encouraged by Democrats and liberal media professionals. It virtually guarantees a subsection of the liberal class, who pledge resistance to Trump, will simultaneously fail to confront the truth of why Clinton did not win and likely engage in the same politics that led to one of the most embarrassing political losses in the history of the United States.

At an invitation-only conference, Clinton was interviewed by Walt Mossberg and Kara Swisher, who founded Recode, a site owned by Vox Media.

“I take responsibility for every decision I made, but that’s not why I lost,” Clinton declared at Code Conference 2017:

“Within one hour, they dumped them and then they began to weaponize them. And they began to have some of their allies within the internet world, like InfoWars, take out pieces and begin to say the most outrageous, outlandish, absurd lies you can imagine.”

Clinton suggested the “biggest Google searches” were for WikiLeaks. Voters were targeted with false information as they genuinely tried to make up their minds, and this influenced them greatly.

“We know that the Google searches for this stuff were particularly high in places like Wisconsin and Pennsylvania,” Clinton asserted.

Clinton did not say what her source was for this information, but it definitely seems like she is wildly exaggerating the breadth and significance of Google searches in states, which she failed to win electoral votes.

The data and research firm, Estately, compiled data based on election-related Google searches. Clinton’s emails received a high amount of searches, however, they weren’t at the top in Wisconsin or Pennsylvania.

Clinton’s theory is frankly bizarre for its lack of basis in reality. The command center of her presidential campaign believed Wisconsin and Michigan were safe and developed a strategy that involved holding on to Pennsylvania.

Clinton again implicated former FBI director James Comey in her loss. Yet, as David Axelrod, who was President Barack Obama’s adviser, previously declared, “Jim Comey didn’t tell her not to campaign in Wisconsin after the convention. Jim Comey didn’t say ‘don’t put any resources into Michigan until the final week of the campaign.’”

Podesta contended in October, “It wasn’t any coincidence, I think, that within minutes of the ‘Access Hollywood’ tape coming out, they decided that this was their countermove.” However, there are no proven facts about what unfolded. This is how the Clinton campaign feels about the timeline of events—that there is a cause-and-effect relationship.

The Podesta emails also did not overshadow the crudeness of the remarks. In fact, though Clinton still lost, 16 Republicans, including Senator John McCain and Governor John Kasich, refused to back Trump, rescinded endorsements or urged Trump to drop out of the race because of his statements about groping women.

“Basically, the group running this was the GRU, which is the military intelligence arm of the Russian military. And they have a very sophisticated cyber operation—in bed with WikiLeaks, in bed with Guccifer, in bed with DC Leaks,” Clinton contended. “You know, DC Leaks and Guccifer, which were dropping a lot of this stuff on me, they haven’t done anything since early January. So, they’re job was done.”

It is a remarkable statement because it matches up with a point made by WikiLeaks editor-in-chief Julian Assange. The documents from DCLeaks.com, Guccifer, or any other outlets involved material separate from the Democratic National Committee leak material and Podesta emails.

Clinton, as well as other Democrats and progressive commentators, talk about what allegedly unfolded with Russian interference as if all the outlets were part of the same operation. This has not been proven by U.S. intelligence agencies.

Democrats, with a record of wildly inconsistent claims on the Podesta emails, contend WikiLeaks was responsible for spreading false information. Not a single email was ever proven to be a forgery.

Later, Clinton was asked during the question and answer portion by a Wisconsin voter why she did not spend more time in Wisconsin. She returned to the bizarre claim about Google searches.

“They were particularly prevalent, very high incidents in certain counties in Wisconsin. So you had counties that had voted for Obama and were not particularly keen about voting for Trump but worried that I was going to jail, worried I was running a child trafficking operation in the basement of pizzeria,” Clinton said.

Except, out of all the many reports on the stunning election outcome, no reporters or journalists specifically proved or highlighted what Clinton claims.

Voter suppression in states like Wisconsin was highlighted by Clinton. That could have had as much (if not more) of an impact than the weaponizing of information.

Democratic Party On “Verge Of Insolvency”

What is even more incredible is the compartmentalization in Clinton’s mind. She railed against the Democratic Party for being “bankrupt” and on the “verge of insolvency.” She maintained she received nothing useful as a nominee. The party’s data operation was “mediocre to poor, nonexistent, wrong.” Clinton had to fund the operation to keep it alive.

“You know, you make these scheduling decisions based on the best information that you have, and it turned out that our information was not as reliable as I wished it had been.”

Andrew Therriault, the former DNC director of data science, reacted, “Irony of her bashing DNC data: our models never had MI/WI/PA looking even close to safe. Her team thought they knew better.”

He added, “Also, that’s pretty precious when she couldn’t have raised all [her money for campaigning] without the DNC’s higher limits as a laundering vehicle.”

Lacking reliable data is not something the Democratic Party or Clinton can pin on the Russians, or WikiLeaks, or Guccifer, or DC Leaks, or any bots with connections to the Trump campaign. It is a critical problem that in retrospect was fatal.

The only problem for Democrats is colossal ineptitude cannot be the narrative. If it is, then it puts a whole lot of responsibility on them for losing to Trump.

Recall, in the “run of the mill” emails from Podesta’s account, a strategy memo for the DNC was drafted by the campaign two months before Trump announced his candidacy. A goal was outlined in April 2015: “make whomever the Republicans nominate unpalatable to a majority of the electorate.”

It advocated against marginalizing “more extreme candidates.” The campaign wanted to make “Pied Piper candidates,” like Trump, Senator Ted Cruz, and Ben Carson, into representatives of the Republican Party. “We need to be elevating the Pied Piper candidates so that they are leaders of the pack and tell the press to [take] them seriously.”

None of the above will be grappled with by Clinton through her forthcoming book. Yet, what was fostered could not be more clear.

The Clinton campaign’s acts enabled the rise of Trump. They lost to the opponent they wanted to face. Staff had a data operation that was lousy. The campaign also clung to failed corporate Democratic policies, which devastated the U.S. for the past two decades.

Instead of facing the weaknesses Sanders exposed, they treated Sanders as someone who was “unrealistic,” a “hapless legislator,” an “Obama betrayer,” and a socialist independent who was not a real Democrat. The campaign was constantly smug toward millennials, including young women, who were drawn to Sanders over Clinton.

Clinton still does not see anything wrong with giving speeches to Goldman Sachs. She insists the criticism of her as a campaigner “bleeds into misogyny.”

“Let’s just be honest, you know, people who have a set of expectations about who should be president and what a president looks like, you know, they’re going to be much more skeptical and critical of somebody who doesn’t look like and talk like and sound like everybody else who’s been president.”

She went on to claim Obama broke a racial barrier, but he was an “attractive, good-looking man,” as though her looks were a major problem. Both Mossberg and Swisher, and her liberal audience, nodded in agreement with this nonsense.

Clinton was one of the most powerful and well-respected politicians in the Democratic Party. The majority of Democrats in the establishment were aggressively against Sanders because they had waited for this moment. It was her time. So many were ready to deliver her the White House, no matter what was reported in the press. Except, no one did anything to resolve the incompetence of the DNC and its data operation, and resolving these impediments to victory were Clinton’s responsibility as the nominee.

Initiatives like Brand New Congress and Our Revolution tune out the constant din of ‘it was all Russia’s fault.’ They recognize voters want candidates who speak to the material conditions in their community and what can be done to advance causes of social, economic, racial, and environmental justice. They even run candidates in races Democrats typically write off because they’re in Republican-safe districts (and they’ve won).

Meanwhile, Clinton Democrats refuse to throw institutional support behind candidates with roots in the Sanders uprising, who have momentum and energy. They stop Representative Keith Ellison, a black Muslim congressman, from gaining leading the DNC and back Tom Perez, a centrist Latino with moderate uninspiring left of center politics. Then they spend the next months touring the country with Sanders because they know people want to hear from Sanders, not Perez.

Clinton said, “We’ve got two very good political strategists running the Senate and the House for Democrats, Nancy Pelosi and Chuck Schumer. They know how to win elections.”

Pelosi has led the Democrats in the House since 2006. In that time, the Democrats have lost over 1,000 seats at the federal and state level. This is not the outcome one would expect from a “very good political strategist.”

“I’m going to keep writing and keep talking and keep supporting people who are on the front lines of the resistance,” Clinton declared, as she was asked about people who want her to simply go away.

In other words, Clinton and her most loyal supporters in the Democratic establishment will continue to frustrate efforts to build a grassroots resistance that can take power and enact policies that serve poor and working class Americans over corporations and the wealthiest one percent.

If she is going to keep insisting Russia and WikiLeaks are why she is not president, there is no reason she should be taken seriously at all.