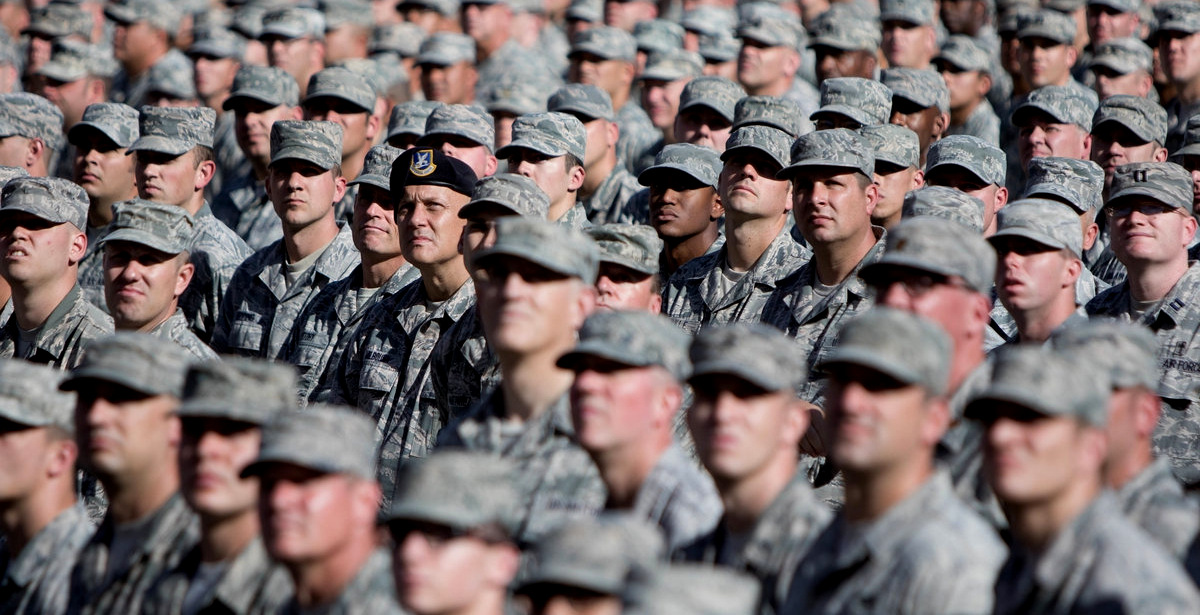 Racism in the Military

MALMSTROM AFB, MONTANA — An Air Force Sergeant is under investigation for twice posting racist messages to the Facebook group of the Los Angeles chapter of Black Lives Matter (BLM). It’s the second time in less than a week that a Sergeant in the U.S. Air Force has come under fire for making derogatory remarks about African-Americans on social media.

In the latest incident, a photoshopped photograph from the popular game show Wheel of Fortune shows a puzzle board that reads N_GGERS; underneath is a caption that says “People Who Annoy You.” The photo was posted once on Sunday (Jan. 28) and again on Monday (Jan. 29), and discovered by Thandisizwe Chimurenga, an administrator for BLM’s Los Angeles Facebook group, who is also a writer for MintPress News.

Screenshots from left to right, Staff Sergeant Nicholas Pineda’s racist post on BLM Los Angeles’ Facebook group, a photo of his Air Force staff sergeant cert., and a photo of Pineda from his Facebook profile.

Chimurenga traced the post to the Facebook page of Staff Sergeant Nicholas Pineda, and filed a written grievance with the USAF via email.

Earlier this week, the New York Post reported that Air Force Tech. Sgt. Geraldine Lovely was removed from her supervisory role at Nellis Air Force base in Las Vegas after posting a video to social media last weekend in which she admonished lower-ranking “black females” for not treating her respectfully.

“They’re talking down to me,” the uniformed Lovely said in the video, which received nearly 2 million views.  “I’m trying to tread lightly as a … higher-ranking [non-commissioned officer] to not blow the fuck up and start a fight club.”

Continuing on, she said:

Why is it that every time I encounter … my subordinates that are black females, they have a giant fucking attitude? Every time I fucking talk to them, it’s like I’m just some fucking stupid-ass girl that doesn’t even … deserve to be talked to as a person.”

(4,600,000+ views) UPDATE: "I’m Maj Chris Sukach, Nellis Public Affairs. This is inappropriate and unacceptable behavior in today’s society & especially for anyone in uniform. Leadership is aware and is taking appropriate action." WARNING: language in video and context is completely unbecoming of a United States Air Force Non-Commissioned Officer. From Admin: I just received something that has no place in the Air Force. I served over 20 years and will be damned if I let this go without addressing it and leadership better handle this NOW! There is absolutely no place to demean Airmen of any race, let alone do so in uniform. This video and comments are sickening and utterly unbecoming of an NCO in the United States Air Force. I apologize to anyone under her supervision as no one deserves to deal with this ignorance and I assure you that I will not rest until I get confirmation this is handled and I mean handled TONIGHT!From the Inbox: "So this morning she went “live” in the group with the video. Then a few of the African American girls commented how racist she was, so she removed the video. After that, people were still mad so they flooded the anonymous link to the page to complain about TSgt Geraldine Lovely without having to actually confront her. Lovely is an admin of the page so she posted the anonymous complaints in the two posts above. She works at the Nellis AFB Fitness Center."

The Las Vegas Sun said that the Air Force had expanded the scope of its investigation into Lovely to determine “if this is a broader issue on the base,” according to a statement.

“While the actions of [Lovely] are inappropriate and unacceptable, we are using this unfortunate situation to continue a dialogue with our Airmen about the topic of good order and discipline, as well as adherence to the Air Force Core Values,” the Air Force said.

Chimurenga told MintPress that while the litany of racist remarks posted on social media might resemble high school pranks, it is important not to trivialize them:

They’re not ‘harmless,’ they’re very deliberate. Sending around links to photos of someone getting a watermelon as a gift or being called racial slurs is akin to death by a thousand paper cuts; they’re almost as traumatizing as the videos of Black people being brutalized and murdered by police. They’re tiring and frustrating but they still have to be challenged because, left unchallenged, they kill your soul. These people need to know that they will answer for their actions. Black peoples’ spirit of resistance is very much alive.”

Thank you for notifying us yesterday regarding the inappropriate social media post made by one of our Airmen. We are taking the appropriate steps to hold this Airman accountable.

Our existing standards of mutual respect apply to social media and electronic communication. The United States Government, the Department of Defense and the Air Force will neither condone nor tolerate unlawful discrimination of any kind. Airmen are accountable for their words and actions, including those conveyed by means of electronic communication.

The Air Force needs to ensure its culture is inclusive, enabling all Airmen to make their greatest contributions to mission success and allowing them to fully engage their talents in solving the complex challenges we face. Equity, dignity, respect, and cooperation among all individuals are essential and expected values for all Malmstrom personnel.”

On Friday a USAF spokeswoman followed up with this email to MintPress:

Senior Airman Nicholas Pineda is assigned to the 341st Missile Wing Staff Agency. SrA Pineda has been at Malmstrom AFB since July 2014. We relied upon the information provided by Thandisizwe Chimurenga and took disciplinary administrative actions to hold SrA Pineda accountable. A military member’s disciplinary administrative history, if one exists, is protected by the Privacy Act of 1974 and is not releasable.”

The links between the disciplinary records of military members and those of police officers which are not made available to the public don’t go unnoticed. The links between racism, militarism and poverty are also well-established. The Rev. Martin Luther King Jr. spoke often of the relationship between the three, and infantrymen and commissioned officers alike — many of whom return to “civilian life” to become police officers — have said that the military has for generations relied on racist depictions of the “Other” — japs, gooks and rag/towelheads — to dehumanize the enemy, who in the post-World War II era have typically been people of color.

Jeffrey Smith, a member of Iraqi Veterans for Peace, testified at the 2008 Winter Soldier hearings that “physical force was used on a daily basis,” and Iraqi civilians were sometimes herded, like cattle, into open-air, barbed wire pens that were too small to hold the mass of detainees. Once, he said, he clotheslined an Iraqi truck driver who was merely trying to communicate something to another driver, “and I was congratulated by my unit and told this was exactly the way we should behave.” This Sept. 2010 photo shows members of Charlie Company, 1st Reconnaissance Battalion, out of Camp Pendleton, Calif. in Sangin, Helmand province, Afghanistan. The Marine Corps later confirmed that one of its scout sniper teams posed for a photograph in front of a flag with a logo resembling that of the notorious Nazi SS. (AP/knightarmco.com)

Moreover, soldiers desensitized to violence often bring home the racism that was learned or deepened in overseas combat. Anti-apartheid activists note that South Africa’s Eastern Cape region was home to some of the worst racial violence during white-minority rule, including the fatal beating  of Steve Biko (murdered in a police station) and the 1984 slayings of the dissident Matthew Goniwe and three of his comrades in the town of Cradock. Many attribute that to the apartheid government’s propensity for drafting white men living in the Eastern Cape, a farming region, and assigning them to the frontlines of the Angolan Civil War, where some of the worst fighting took place.

Similarly, Jon Burge, a military police investigator in the Vietnam War, was a commander of a Chicago Police Department Unit on the city’s South Side. Between 1972 and 1981, Burge and his men used torture techniques — including suffocation and electrical shock to detainees’ genitals — to elicit confessions from more than 110 African-American men. One of his victims, Anthony Holmes, provided this description of his treatment to prosecutors investigating the case:

[Burge] put some handcuffs on my ankles, then he took one wire and put it on my ankles, he took the other wire and put it behind my back, on the handcuffs behind my back. Then after that, when he — then he went and got a plastic bag, put it over my head … so I bit through it. So he went and got another bag and put it on my head and he twisted it. When he twisted it, it cut my air off and I started shaking. … So then he hit me with the voltage. When he hit me with the voltage, that’s when I started gritting, crying, hollering … It feel [sic] like a thousand needles going through my body. And then after that, it just feel like, you know — it feel like something just burning me from the inside, and, um, I shook, I gritted, I hollered, then I passed out.”

Writing in the Huffington Post last year, David Fagin noted that security for the neo-Nazi protesters in Charlottesville in August of 2017 was provided by many veterans of wars in Afghanistan and Iraq:

[T]o think we’re not only welcoming home members of the armed forces whose opinions and beliefs have been shattered and damaged due to their perilous environment, but who find solace in a President willing to condone those twisted beliefs, rather than make it his mission to do everything he can to help them, makes one worry about where the next Charlottesville will be, and who, exactly, we’ll be fighting.”