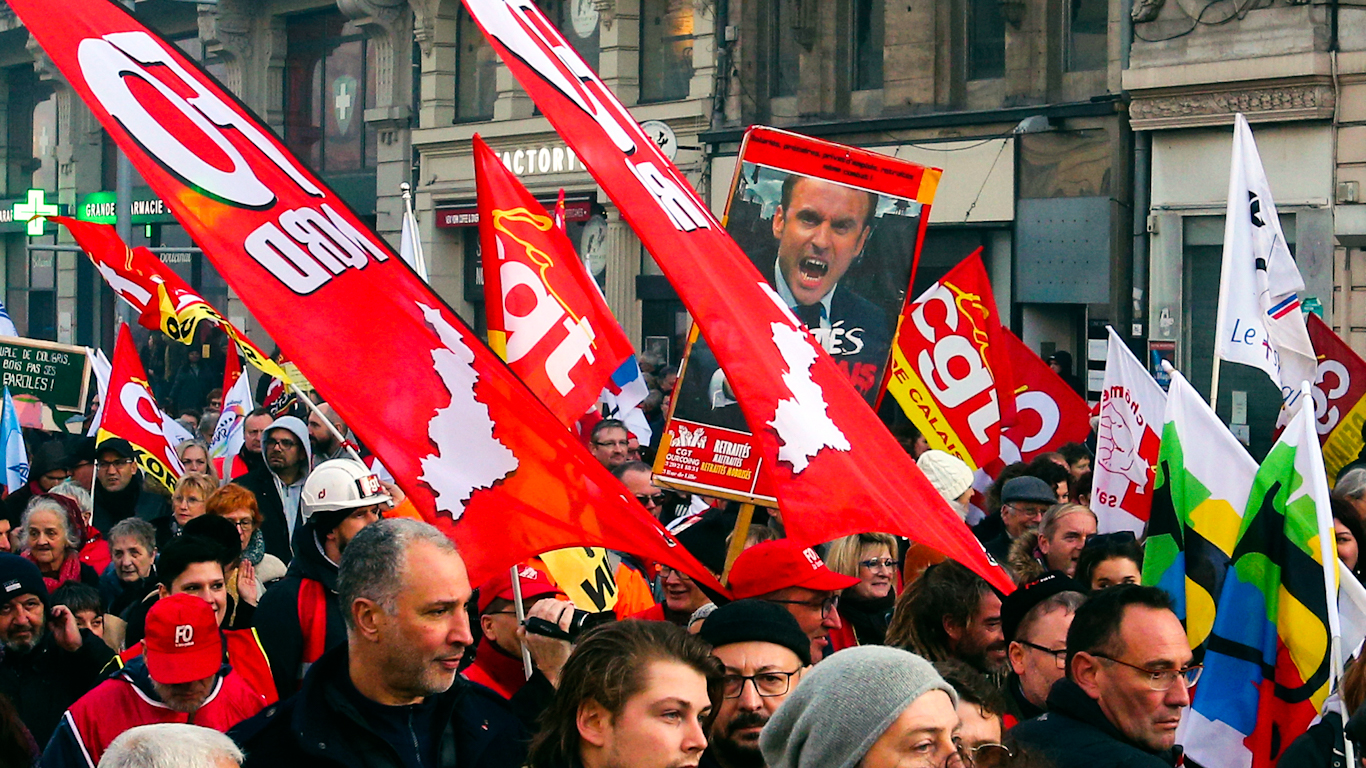 Nationwide protests against the government of Emanuel Macron entered their seventh continuous week today in France, as between 187,000 (a government estimate) and 250,000 people (the unions’ count) took to the streets to oppose Macron’s plans to radically alter the country’s pension plan, seen by many as the crown jewel in France’s substantial welfare state.

Led by transport unions, mass protests occurred yesterday across the country, including in Paris, Lyon, Grenoble, Nantes, Dijon and Angers. Meanwhile, in Nice, there was a party atmosphere as activists organized a torchlight evening demonstration. Despite the light-hearted tone some of the protests took, they now constitute the longest and most intense actions against the government since the famous May 1968 “revolution,” an event that continues to define French society.

For weeks, transport unions have blocked the capital’s arteries, with the large majority of Paris’ famous metro lines closed or virtually unusable, an action that government-owned train operator SNCF estimates has cost them around €700 million (~775 million U.S. Dollars). Likewise, suburban and national services have been canceled, with many people’s Christmas and New Year plans affected.

Transport unions are the most organized and committed resistance to Macron’s agenda and have shut down many of France’s port cities, including Calais, Dunkirk, Le Havre, La Rochelle and Marseille, calling for “dead ports” over the weekend. Yet as the strike continues into its seventh week, its intensity has waned, with many strikers forced to go back to work after their funds ran dry. Another reason some have returned to work is Prime Minister Edouard Philippe’s announcement that he would “temporarily” suspend the controversial “pivot age” that would see the de facto retirement age rise from 62 to 67. Nevertheless, Philippe has also said that the transport chaos “has gone on for too long,” as the government attempts to divide and conquer the workers.

President Macron is attempting to unify 42 separate state-funded pension programs into one amalgamated system that he argues would be more fair and transparent. However, this would mean many unions would have to give up hard-earned benefits for their members to accept a national standard, including a higher retirement age, as the president attempts to mold France into a new, neoliberal image.

We went to the Louvre and picked the one day they went on strike pic.twitter.com/YKynQtmkHK

However, just as the enthusiasm from transport workers has waned, they have found allies in strange places. French lawyers, whose union has managed to build up an impressive €2 billion surplus in pension funds, have struck in opposition to the plan that they fear would see it liquidated. Across the country, legal workers have theatrically thrown their gowns down in a symbolic challenge to the government. Yesterday also saw mass walkouts from schoolteachers.

Other groups have found particularly creative ways to fight Macron’s vision. Striking ballet dancers performed a free show on the steps of the famous Palais Garnier opera house in Paris, while a week later, the Paris Opera orchestra staged their own al fresco concert. Meanwhile, employees of the Louvre Museum shut the building down today, blocking the entrance at the famous glass pyramid, telling visitors that “the Mona Lisa is on strike” and arguing that Macron’s plan would “lower everyone’s pensions.”

President Macron came to power in 2017, winning in the final round of the election against fascist challenger Marine Le Pen. A strong believer in neoliberalism and an admirer of former British Prime Minister Margaret Thatcher, he has insisted that France must not merely be reformed, but transformed, as he attempts to radically alter the shape of French society, away from a social democratic model to one more resembling the United States. December opinion polls put his approval rate at around 30 percent and found that two-thirds of the French public disapproves of him.

The protests are the longest and among the most intense since those of May 1968, a generation-defining movement of wildcat strikes and sit ins that led to a government, fearful of a socialist revolution, hastily decreeing sweeping worker and citizen rights programs that characterize French society today. The French worker’s confidence and disdain for the authority of bosses emanates from the spirit of that movement. For decades, even conservative presidents feared the power of organized labor. However, Macron has been clear in his intentions to end the welfare state. Time will tell if his plans will succeed. But from the looks of things, there are a considerable number of people who oppose them.