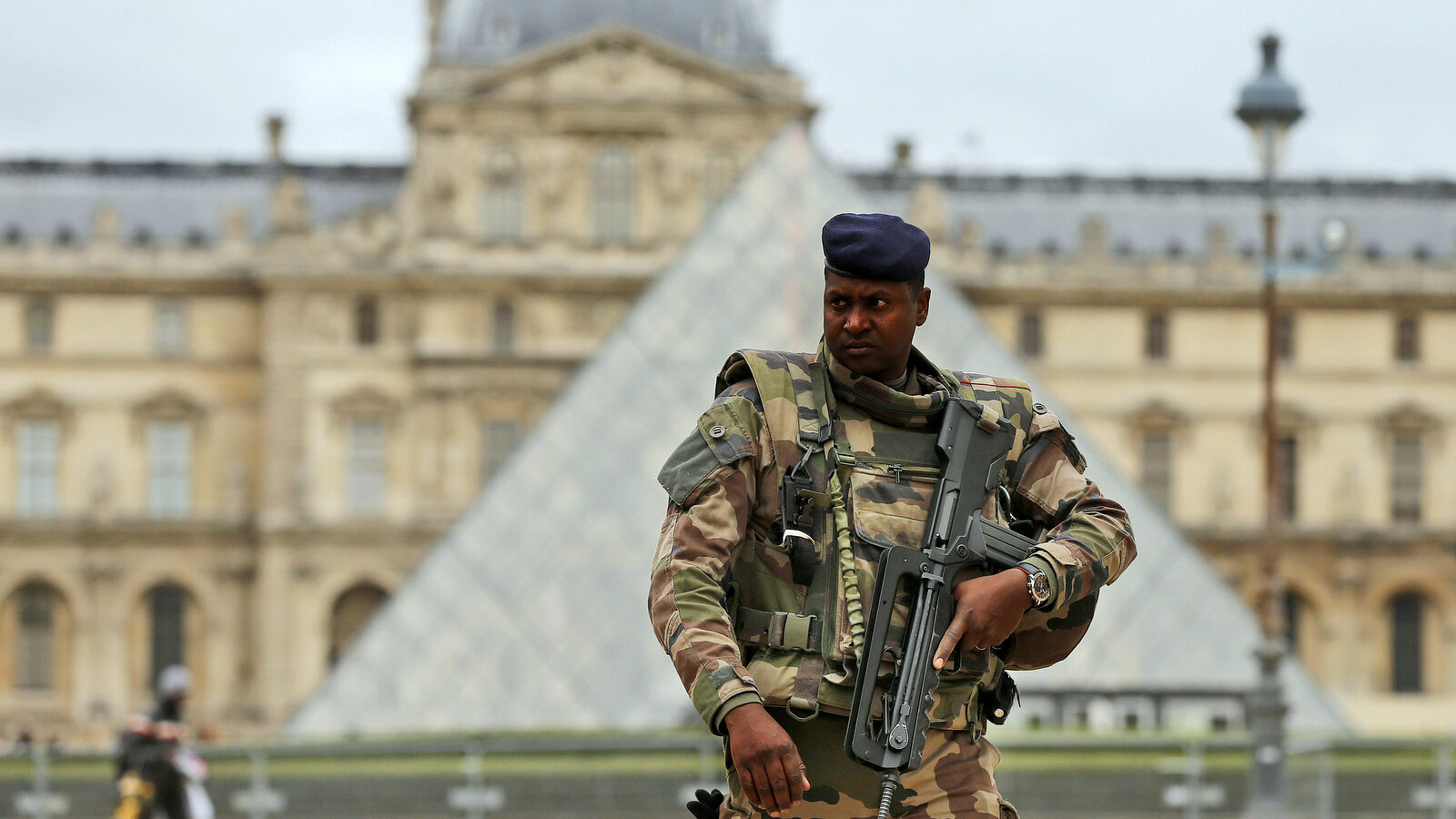 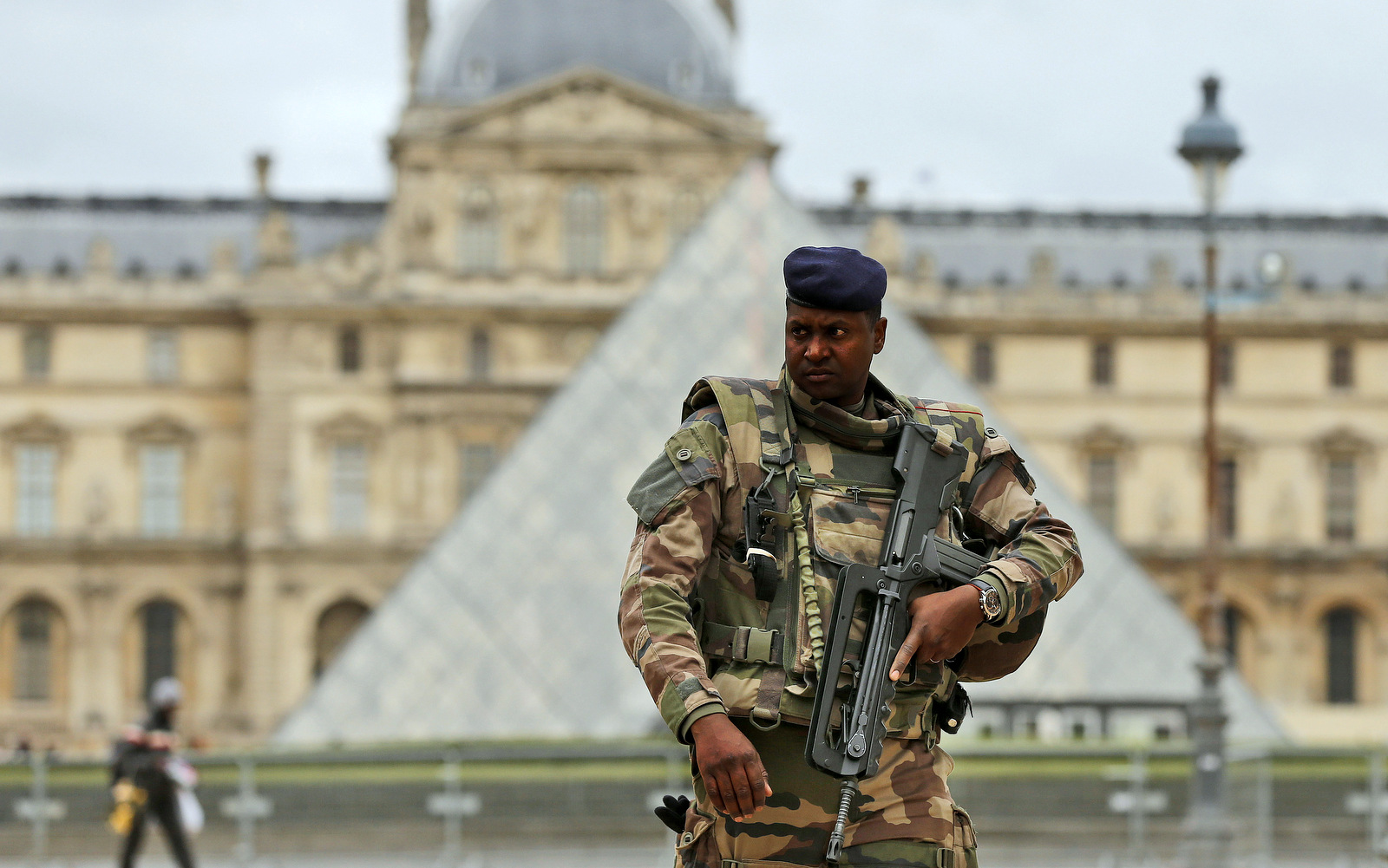 A soldier patrols in the courtyard of the Louvre Museum in Paris, Tuesday, Nov. 17, 2015. France made an unprecedented demand on Tuesday for its European Union allies to support its military action against the Islamic State group as it launched new airstrikes on the militants’ Syrian stronghold. (AP Photo/Frank Augstein)

(ANTIMEDIA) — As the dust settles in the wake of the Paris terror attacks, the world continues to watch the reaction of the French government. Over the weekend, President Francois Hollande launched military strikes in coordination with U.S. forces. Additional measures announced include the deployment of 10,000 troops around the country; the amendment of state of emergency laws to allow for a three-month extension of house raids; and security operations in France, Belgium, Greece, and Germany in the manhunt for ISIS operatives responsible for Friday’s terror attacks.

The 10,000 soldiers will join the 7,000 already deployed after the January Charlie Hebdo killings, which took 17 lives. Following the 11/13 attacks, which have thus far killed 132 people and injured hundreds more, 4,000 to 5,000 troops will patrol the streets of Paris in a drastically expanded military presence in the French capital.

These soldiers will be granted relatively unprecedented powers as Parliament and President Hollande look to amend the 1955 State of Emergency law, which was last used in 2005 when the government looked to silence anti-police brutality riots. Historically, the law has been used to suppress Muslims in the country, and it’s unlikely the new iteration will prevent this.

Marking only the second time since the Second World War that the law has been enforced, the modifications will grant the French government the right to put entire neighborhoods on lockdown, including strictly enforced curfews, house raids without judicial oversight, weapons seizure, search and arrest of suspicious individuals, and broad powers of censorship. The law will also allow for the closure of theaters and meeting halls, as well as stronger control over France’s borders.

Jean-Hugues Matelly, lieutenant colonel of the Gendarmerie and president of the Association GendXXI, explained that during the state of emergency,

“Measures that are normally the responsibility of the judicial police, such as searches, may be applied [to other authorities].”

Meanwhile, the search continues for those responsible for the attacks, including an extensive manhunt in Belgium, where seven people have been arrested for possible jihadi links.

Many analysts believe the Paris terror attacks will force Hollande, an ardent opponent of Syrian President Bashar al-Assad, to shift his attention to formulating a more comprehensive military approach to the Islamic State.

In an article for The Guardian, French journalist Pierre Haski asked,

“Have the Paris attacks changed the rules of the game? Both Hollande and his prime minister, Manuel Valls, proclaimed in martial words that the enemy is ISIS, and that France’s response would be merciless. Has the shift been made from having two enemies to one?”