Imagine there was a miracle drug that prevented HIV infections, but a huge corporation held back its release in order to squeeze billions out of the sick, dying and suffering. It is evil on the scale of comic book villains, a crime Bonnie and Clyde would balk at. That is exactly what pharmaceutical giant Gilead Sciences is accused of doing in a new lawsuit.

An HIV prevention group called PrEP4All has just filed a petition with the U.S. Patent and Trademark Office alleging that Gilead knew it had a safer and more effective drug in the fight against the deadly disease, but shelved it for over five years in order to reap enormous profits from far less effective drugs it had a monopoly over.

In 2004, Gilead suspended development of the drug that is now known as Truvada, not restarting the project until 2010, despite clear evidence that the new medication was more effective and had far fewer debilitating side effects, such as kidney damage and bone density loss. PrEP4All states that:

Right now, a miracle drug is being withheld from the American public that can reduce the risk of HIV transmission by more than 99%. The drug is called Truvada and when taken daily as Pre-Exposure Prophylaxis (PrEP) can help provide almost absolute protection against the virus.”

According to the group, more than 100 Americans contract HIV every day. The disease disproportionately affects the poor, people of color and the LGBT community. But fewer than ten percent of the Americans who should be taking it for prevention currently are. This is primarily due to its price. One dose costs around $6 per month to manufacture, but Gilead charges patients over $1,700 for those pills. The gross profit on each customer, therefore, is around 28,000 percent. PrEP4ALL frames this as the manufacturer withholding lifesaving medication to the American public in the pursuit of profit. Gilead reported HIV medication sales of $14.6 billion in 2018. 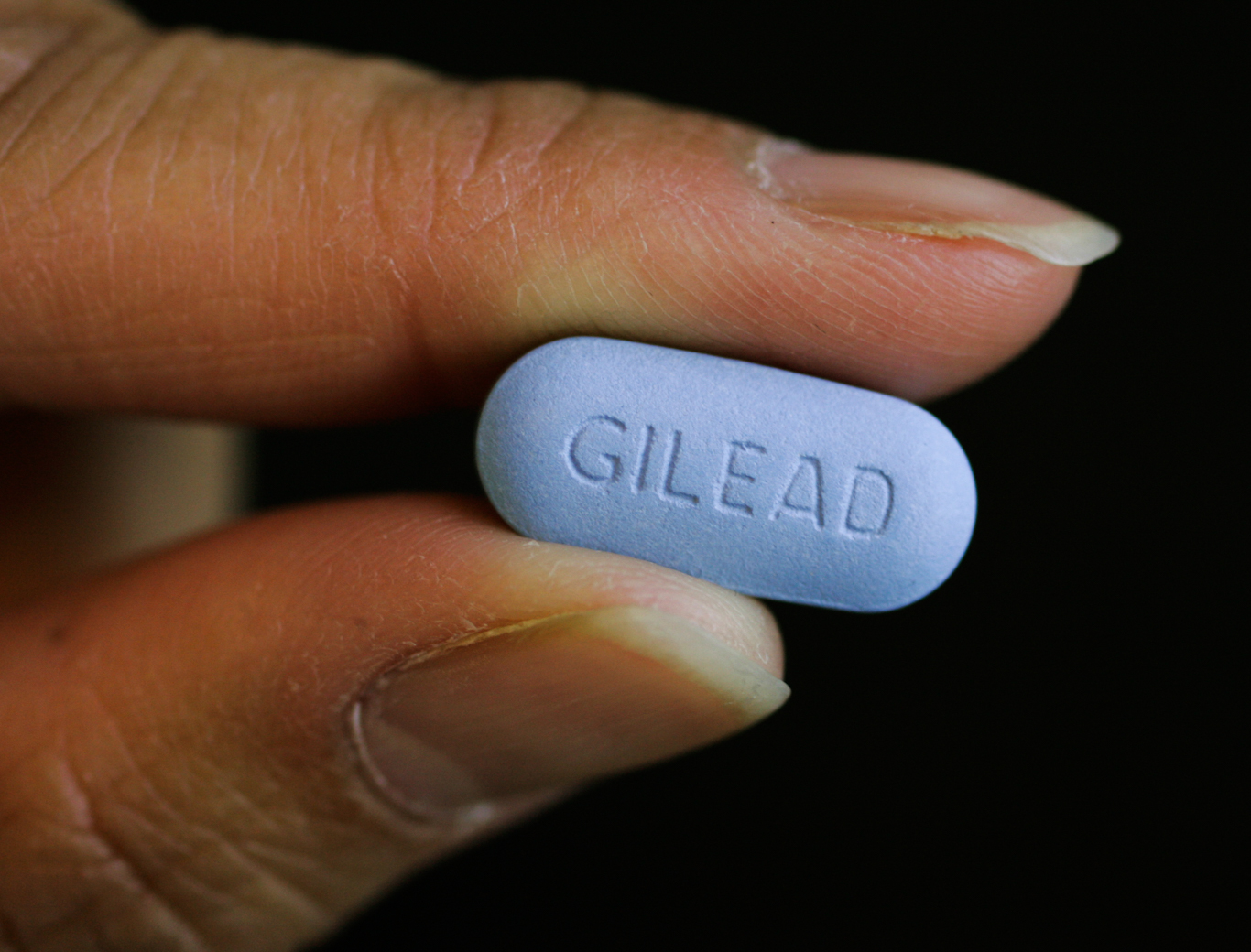 A close up of Gilead’s Truvada pill in a lab in a Foster City, Calif. Paul Sakuma | AP

As evidence, PrEP4All’s petition cites public statements from Gilead executives that indicated a desire to avoid cannibalizing sales of the older, less safe and effective drugs. A company-funded study found that preventing patients from taking the new drug would cause an extra 16,000 deaths over nine years the Washington Post reports.

In much the same way as Disney continues to extend the copyright protection laws in the U.S., often derisively called the “Mickey Mouse Protection Act”, big pharmaceutical corporations use their considerable resources on legal strategies to avoid their drugs entering the public domain, at which point generic alternatives can be made, drastically increasing competition and reducing profits. Inside the industry, this is known as “life-cycle management.”

Gilead vehemently denies the charges. The company’s spokesperson Ryan McKeel stated that “Patient safety is of foremost importance to us, and any implication that Gilead delayed the development of a drug known to be safer than [the older drug] is false.’’

The U.S. Patent and Trademark Office and Food and Drug Administration will determine the appropriate Patent Term Extension (PTE) associated with tenofovir alafenamide (TAF), and Gilead defers to that process. With regard to the petition, we strongly believe it lacks merit and is in conflict with the PTE statute…Patient safety is of foremost importance to us and any implication that Gilead delayed the development of a drug known to be safer than TDF is false.”

Gilead was founded in 1987 and is based in Foster City, California. In the midst of the scandal, it is attempting to secure a patent extension from the Trump administration on Truvada, the drug it allegedly held back until previous drugs had run out their patents.

It is an absolute disgrace that in America, a greedy drug company like Gilead can deprive hundreds of thousands of Americans of lifesaving HIV medicine to extract more profit, lie about it, and then have the audacity to ask the US government to award it with a longer monopoly to reap tens of billions more in profits.”

For analysis of the situation, MintPress News reached out to Dean Baker, an economist and co-founder of the Center for Economic Policy Research. Baker was one of the few in his profession to correctly predict the U.S. housing bubble collapse and the resulting economic recession of 2008. He has also been a strong critic of the pharmaceutical industry.

On the idea that Gilead was basically responsible for murder on an industrial scale, the esteemed economist was remarkably blasé, claiming he “wouldn’t doubt” that PrEP4All’s basic allegation was true. “We should expect that companies will try to exploit their patent monopolies as much as possible, because they are in business to make a profit,” he said. “Drug companies are in business to make money, why would anyone be surprised that they game the patent system to make as much as possible?” Baker added that it was no use getting angry at individual companies’ misdeeds, as the problem was systemic:

We give companies patent monopolies that allow them to sell drugs at mark-ups of several thousand percent above their production costs. How can we be surprised when they lie or conceal information to push their drugs as widely as possible?”

HIV terrified America when it exploded in the 1980s. The deadly disease, most associated with gay men, was stigmatized and little understood, and took away many high-profile stars, such as Rock Hudson, Freddie Mercury and Liberace. Around 1.1 million Americans are living with HIV today, although the government estimates that approximately 1 in 7 do not know they are infected. However, these numbers pale in comparison to those in sub-Saharan Africa and South Asia. In some Southern African countries, the official HIV prevalence rate nears or even tops 25 percent of the population. Around 38 million people live with the disease globally, according to the World Health Organization. When taken daily, Truvada reduces the risk of transmission by more than 99 percent, according to PrEP4All.

Defenders of the current system often argue that high drug prices and long patent protections are necessary to spur innovation. Without them, they claim, costly innovations would be unprofitable. But the ironic thing about Truvada is that Gilead did not pay for the research into its own highly profitable drug: the U.S. taxpayer did. That is according to the Department of Justice, who is currently suing Gilead to recoup profits the pharmaceutical giant made selling the drug to Americans. Before his recent death, Chairman of the House Committee on Oversight and Reform, Elijah Cummings, stated that the government had provided tens of millions of dollars to direct government-employed researchers to develop the drug and that Gilead’s astronomical prices were preventing further public use. PrEP4ALL alleges that the government paid for almost 100 percent of the research and development of Truvada, yet Gilead has taken the profits.

Another shocking fact about the Gilead case is the markup the company charges Americans. The drug is sold in Australia for 8 U.S. Dollars per month. It is even cheaper in the developing world. As Ocasio-Cortez said to Gilead’s CEO, “There’s no reason this should be $2,000 a month. People are dying because of it and there’s no enforceable reason for it.” During his questioning with Ocasio-Cortez, Gilead’s CEO admitted that the public had indeed invested $50 million to fund the drug in the first place.

Ocasio-Cortez was keen to make the point that the problem was not with just one bad apple, but the system that allows such a practice to take place. “Every single developed country in the world guarantees healthcare except the United States because we can’t get it together, because we don’t have the fortitude to kick pharmaceutical lobbyists outside of our congressional offices…we can’t even reform our own political system to make sure that we are more responsive to the people,” she said.

DRUG PRICES: @AOC grilled the CEO of Gilead for pricing the anti-HIV drug Truvada, aka PrEP, at $8 in Australia but more than $1,500 in the U.S.

"You will do anything to live, and that is what makes the price of medicine different from the price of an iPhone." pic.twitter.com/kO6Wh3W6zn

A systemic problem requires a systemic solution, according to Baker. “Drugs are almost invariably cheap to manufacture. They end up being expensive because of patent and related monopolies,” he explains. He advocates for creating a publicly financed pharmaceutical research network, where the taxpayer pays for medical research upfront and all inventions or drugs that come out of it are publicly available.

“I would look to replace patent monopoly supported research with direct public funding. This could be done by the same companies that do research now. The difference would be that under the system I envision they would get long-term contracts, with the condition that all findings be posted as soon as practical (so other researchers could benefit) and that all patents would be placed in the public domain so that they could be sold as generics from day one” he told MintPress.

Baker also supports Sanders’ plan to buy up patents so the government can release them to the public, drastically reducing drug prices. But until the day that the U.S. moves towards a system based on health rather than profit, cases like Gilead’s will be all too common, as, driven by the logic of capitalism, corporations put profit before people.

Editor’s note | This article was updated to include a response from Gilead.