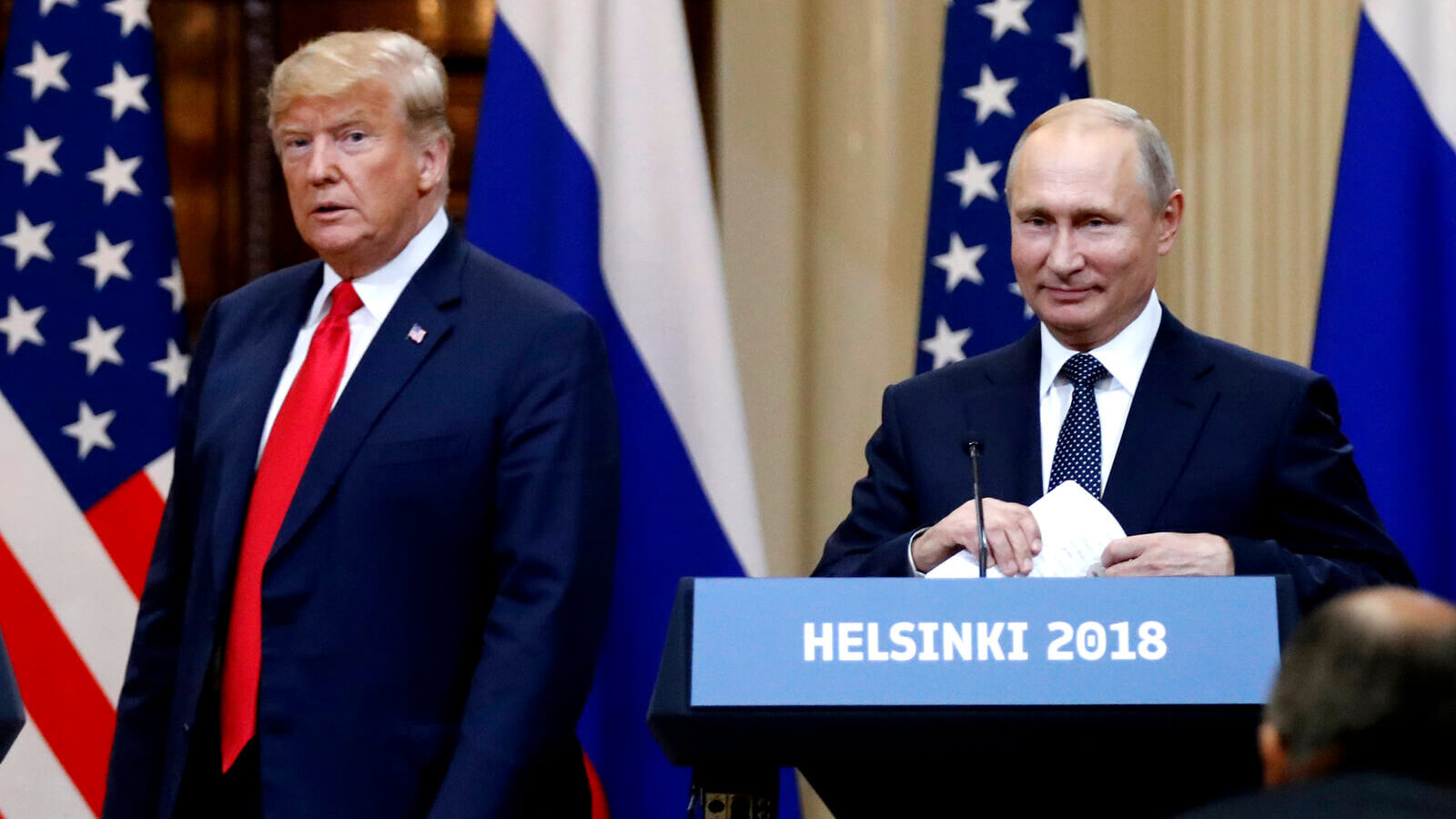 The Cold War is a thing of the past. By the time President Putin said as much during preliminary remarks at his joint press conference with President Trump in Helsinki, it was clear this would not stand. Not after so much investment by American conservatives in Cold War 2.0.

Russophobia is a 24/7 industry, and all concerned, including its media vassals, remain absolutely livid with the “disgraceful” Trump-Putin presser. Trump has “colluded with Russia.” How could the President of the United States promote “moral equivalence” with a “world-class thug”?

Multiple opportunities for apoplectic outrage were in order.

Trump: “Our relationship has never been worse than it is now. However, that changed. As of about four hours ago.”

Putin: “The United States could be more decisive in nudging Ukrainian leadership.”

Trump: “There was no collusion… I beat Hillary Clinton easily.”

Putin: “We should be guided by facts. Can you name a single fact that would definitively prove collusion? This is nonsense.”

Then, the clincher: the Russian president calls [Special Counsel] Robert Mueller’s ‘bluff’, offering to interrogate the Russians indicted for alleged election meddling in the US if Mueller makes an official request to Moscow. But in exchange, Russia would expect the US to question Americans on whether Moscow should face charges for illegal actions.

Trump hits it out of the park when asked whether he believes US intelligence, which concluded that Russia did meddle in the election, or Putin, who strongly denies it.

President Putin says it’s not Russia. I don’t see any reason why it would be.”

It was inevitable that a strategically crucial summit between the Russian and American presidencies would be hijacked by the dementia of the US news cycle.

Trump was unfazed. He knows that the DNC computer hard-drives – the source of an alleged “hacking” – simply “disappeared” while in the custody of US intel, FBI included. He knows the bandwidth necessary for file transfer was much larger than a hack might have managed in the time allowed. It was a leak, a download into a flash-drive.

Additionally, Putin knows that Mueller knows he will never be able to drag 12 Russian intelligence agents into a US courtroom. So the – debunked – indictment, announced only three days before Helsinki, was nothing more than a pre-emptive, judicial hand grenade.

No wonder John Brennan, a former CIA director under the Obama administration, is fuming. “Donald Trump’s press conference performance in Helsinki rises to exceed the threshold of ‘high crimes and misdemeanors.’ It was nothing short of treasonous. Not only were Trump’s comments imbecilic, he is wholly in the pocket of Putin.”

How Syria and Ukraine are linked

However, there are reasons to expect at least minimal progress on three fronts in Helsinki: a solution for the Syria tragedy, an effort to limit nuclear weapons and save the Intermediate-range Nuclear Forces treaty signed in 1987 by Reagan and Gorbachev, and a positive drive to normalize US-Russia relations, away from Cold War 2.0.

Trump knew he had nothing to offer Putin to negotiate on Syria. The Syrian Arab Army (SAA) now controls virtually 90% of national territory. Russia is firmly established in the Eastern Mediterranean, especially after signing a 49-year agreement with Damascus.

Even considering careful mentions of Israel on both sides, Putin certainly did not agree to force Iran out of Syria.

Ahead of the Eagle-meets-Bear Trump-Putin summit on July 16 in Helsinki, Syria-centered spin has gone into overdrive. Unknown sources have leaked what is billed as President Trump’s alleged Syria deal discussed with Jordan’s King Abdullah. Trump would “allow” Damascus, supported by Russian air power, to regain its territory along the borders of Jordan, Israel and Iraq.

No “grand bargain” on Iran seems to be in the cards. The top adviser to Ayatollah Khamenei, Ali Akbar Velayati, was in Moscow last week. The Moscow-Tehran entente cordiale seems unbreakable. In parallel, as Asia Times has learned, Bashar al-Assad has told Moscow he might even agree to Iran leaving Syria, but Israel would have to return the occupied Golan Heights. So, the status quo remains.

Putin did mention both presidents discussed the Iran nuclear deal or Joint Comprehensive Plan Of Action and essentially they, strongly, agree to disagree. US Secretary of State Mike Pompeo and Treasury Secretary Steven Mnuchin have written a letter formally rejecting an appeal for carve-outs in finance, energy and healthcare by Germany, France and the UK. A maximum economic blockade remains the name of the game. Putin may have impressed on Trump the possible dire consequences of a US oil embargo on Iran, and even the (far-fetched) scenario of Tehran blocking the Strait of Hormuz.

Judging by what both presidents said, and what has been leaked so far, Trump may not have offered an explicit US recognition of Crimea for Russia, or an easing of Ukraine-linked sanctions.

It’s reasonable to picture a very delicate ballet in terms of what they really discussed in relation to Ukraine. Once again, the only thing Trump could offer on Ukraine is an easing of sanctions. But for Russia the stakes are much higher.

Putin clearly sees Southwest Asia and Central and Eastern Europe as totally integrated. The Black Sea basin is where Russia intersects with Ukraine, Turkey, Eastern Europe and the Caucasus. Or, historically, where the former Russian, Ottoman and Habsburg empires converged.

A Greater Black Sea implies the geopolitical convergence of what’s happening in both Syria and Ukraine. That’s why for the Kremlin only an overall package matters. It’s not by accident that Washington identified these two nodes – destabilizing Damascus and turning the tables in Kiev – to cause problems for Moscow.

Putin sees a stable Syria and a stable Ukraine as essential to ease his burden in dealing with the Balkans and the Baltics. We’re back once again to that classic geopolitical staple, the Intermarium (“between the seas”). That’s the ultra-contested rimland from Estonia in the north to Bulgaria in the south – and to the Caucasus in the east. Once, that used to frame the clash between Germany and Russia. Now, that frames the clash between the US and Russia.

In a fascinating echo of the summit in Helsinki, Western strategists do lose their sleep gaming on Russia being able to “Finlandize” this whole rimland.

And that brings us, inevitably, to what could be termed The German Question. What is Putin’s ultimate goal: a quite close business and strategic relationship with Germany (German business is in favor)? Or some sort of entente cordiale with the US? EU diplomats in Brussels are openly discussing that underneath all the thunder and lightning, this is the holy of the holies.

Take a walk on the wild side

The now notorious key takeaway from a Trump interview at his golf club in Turnberry, Scotland, before Helsinki, may offer some clues.

Putin certainly knows it. But even Trump, while not being a Clausewitzian strategist, may have had an intuition that the post-WWII liberal order, built by a hegemonic US and bent on permanent US military hegemony over the Eurasian landmass while subduing a vassal Europe, is waning.

While Trump firebombs this United States of Europe as an “unfair” competitor of the US, it’s essential to remember that it was the White House that asked for the Helsinki summit, not the Kremlin.

Trump treats the EU with undisguised disdain. He would love nothing better than for the EU to dissolve. His Arab “partners” can be easily controlled by fear. He has all but declared economic war on China and is on tariff overdrive – even as the IMF warns that the global economy runs the risk of losing around $500 billion in the process. And he faces the ultimate intractable, the China-Russia-Iran axis of Eurasian integration, which simply won’t go away.

So, talking to “world-class thug” Putin – in usual suspect terminology – is a must. A divide-and-rule here, a deal there – who knows what some hustling will bring? To paraphrase Lou Reed, New Trump City “is the place where they say “Hey babe, take a walk on the wild side.”

During the Helsinki presser, Putin, fresh from Russia’s spectacular World Cup soft power PR coup, passed a football to Trump. The US president said he would give it to his son, Barron, and passed the ball to First Lady Melania. Well, the ball is now in Melania’s court.