Color Revolution 2.0 In Lebanon: From Piles Of Trash To Piles Of Rubble 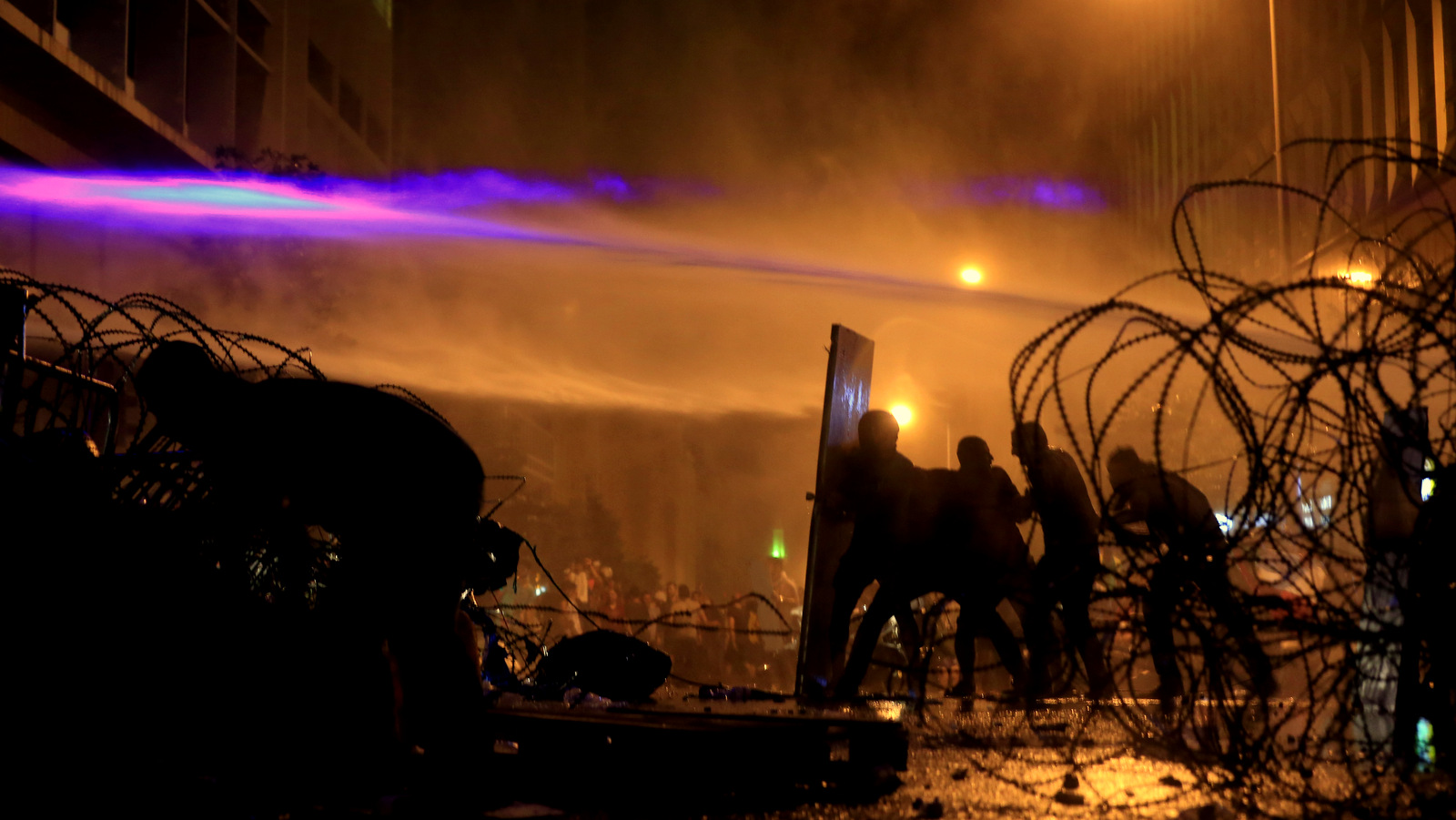 Lebanese activists hold up a makeshift shield, as they are sprayed by riot police using water cannons during a protest against the ongoing trash crisis, in downtown Beirut, Lebanon, Sunday, Aug. 23, 2015. Lebanese riot police fired several rounds of tear gas and water cannons for the second consecutive day in downtown Beirut Sunday as they battled protesters with batons and stones _ a marked escalation of mass demonstrations against an ongoing trash crisis. (AP Photo/Hassan Ammar)

“Spontaneous.” “Genuine.” Defiant.” The US State Department’s marketeers have used these labels in attempts to differentiate its latest wave of global “color revolutions” from the now tired, ineffective, and familiar formulas used everywhere from the US-engineered “Arab Spring,” to the Euromaidan in Ukraine, to Bersih 4.0 in Malaysia.

The latest target is Lebanon where protests have begun in the streets of the capital, Beirut. Branded the “YouStink!” marches, the alleged provocation was dysfunctional municipal garbage collection services. However, very predictably, the protests have shifted quickly from what could have been perceived as legitimate demands to outright calls for regime change.

Just recently in Armenia, the US conducted what appeared to be a test run of its new and improved “color revolution” system of regime change. It attempted to create a movement with little if any initial political affiliation and with deeply hidden ties between protest organizers and their US State Department affiliations. Ultimately the so-called “Electric Yerevan” protests, whose alleged grievances were rising electric bills, spent so much time trying to convince Armenians and people around the world that they weren’t a US-backed mob, they never succeeded in building up sufficient momentum to move on to the next step.

The trick was to first use rising electrical costs as a pretext to stage the protests, then quickly swing them around to demand a change in government. Likely, provocations and violence were planned for later stages, as well as opportunities for America’s client opposition parties to take over and swell the ranks of street mobs with their supporters.

In Armenia, America’s next generation of color revolutions failed.

In Beirut, however, it seems that the protests have made it at least to the point where the alleged pretext – piles of garbage – have now been replaced with demands for regime change.

Despite the 2005 so-called “Cedar Revolution” being exposed as entirely US-engineered, paving the way for the expulsion of Syrian troops from Lebanon and an Israeli attack on the country the following year, many even in the alternative press have been taken in by what should be an obvious, albeit more carefully concealed, follow-up to 2005’s events.

Transcending emotional appraisals of street mobs and reciting the alleged demands and motivations of the protesters themselves, protests are like anything else in the real world – they require leaders, organization, money, logistics, and infrastructure to function. The “YouStink!” protest is no different. Trawling through the Western media’s reports, several names are repeatedly mentioned as “organizers” and “leaders.”

They include Asaad Thebian, an alumni of the US State Department’s U.S.-Middle East Partnership Initiative (MEPI). In 2014, Thebian would be standing in front of American flags, and behind a podium with the US State Department’s seal affixed to it at a MEPI event, berating the Lebanese government. Now in 2015, he is attempting to overthrow it. Thebian would be quoted by Al Jazeera claiming:

‘We started as dozens of protesters and now we’re thousands,’ Asaad Thebian, an activist with the You Stink! campaign, said during Friday’s press conference. ‘We are demanding parliamentary elections.’

The International Business Times would expand on what is clearly taking shape as the true agenda behind the protests. In their article, “‘You Stink’ Demonstrators In Beirut Issue 72-Hour Ultimatum, Vow To Spread Protests In Lebanon Nationwide,” they would report that:

In Beirut’s symbolic Martyrs’ Square recently, protesters have chanted, ‘The people want the downfall of the government’ and ‘Revolution!’ Some have drawn parallels between these rallies and the demonstrations that swept many Arab countries in 2011 and 2012, which led to the toppling of a number of regimes in the Middle East and North Africa.

Joining Thebian is Michel Elefteriades who helped co-organize the US-backed mobs in Lebanon in 2005’s “Cedar Revolution” and worked for years to expel Syrian troops from Lebanon. The International Business Times would conduct a lengthy interview with him in their report, “Lebanon You Stink protests: We are not Egypt, claims activist Michel Elefteriades.” The report would quote Elefteriades as saying:

‘This is not similar to what happened in Egypt or elsewhere where people were manipulated, or without greater political awareness,’ Elefteriades exclusively told IBTimes UK from Beirut.

Elefteriades, in addition to claiming somehow their protest is different, would also attempt to assuage fears of a power vacuum forming if the current government was ousted:

‘There is a leadership that is ready to take over and there will not be a vacuum,’ Elefteriades explained. ‘There are many people, with great capacities, but that are still suffocated by this political elite and this new class will never be able to lead this country because those in place don’t want to give them space. So, as soon as that old political class will have left, there will be the emergence of a new political class, from one day to the next.’

There is also Lucien Bourjeily, a theater artist who in 2012 organized a London showing of “66 Minutes in Damascus.” The London Guardian would review his play, in which the audience was “immersed” in the experience of being a “political prisoner” of the “crumbling Assad regime” in Syria.

Also telling is Walid Jumblatt’s support of the mobs. In a Lebanese National News Agency report titled, “Jumblatt urges You Stink organizers to halt political manipulation of their movement,” it was stated that:

MP Walid Jumblatt tweeted on Sunday that yesterday’s protest in Down Town Beirut truly expressed the pains suffered by the Lebanese. He compelled those responsible for You Stink movement not to allow political parties to take advantage of this “spontaneous movement” and abort it prematurely. He also urged the movement’s organizers to study the proper mechanism to execute their demands.

Jumblatt’s calls are similar to those made by US-proxy political opposition parties in Armenia who insisted the protests were “spontaneous” and urged the clearly politically motivated movement to remain ‘unpolitical.’ An added touch to Lebanon’s current round of protests was the protesters rejecting Jumblatt’s support for the movement. It is likely that Jumblatt and others will end up literally on stage leading protests if they escalate long enough before sectarian violence is finally triggered.

Jumblatt role is significant and his name should be familiar to those following events in the Middle East. It was Jumblatt who conspired with then US Vice President Dick Cheney on how best to undermine neighboring Syria in the years leading up to the 2011 war. Revealed in Pulitzer Prize-winning journalist Seymour Hersh’s 2007 report “The Redirection: Is the Administration’s new policy benefitting our enemies in the war on terrorism?” Jumblatt suggested using the Syrian Muslim Brotherhood, a scheme that even at the time had already gotten underway.

Jumblatt then told me that he had met with Vice-President Cheney in Washington last fall to discuss, among other issues, the possibility of undermining Assad. He and his colleagues advised Cheney that, if the United States does try to move against Syria, members of the Syrian Muslim Brotherhood would be ‘the ones to talk to,’ Jumblatt said.

Hersh would also report that funding was already being channeled by the US and Saudi Arabia to the Brotherhood. Of course, by 2011, the Syrian Muslim Brotherhood along with Al Qaeda would use those resources to begin an armed confrontation with the Syrian government which rages on to this day. The events Jumblatt helped set in motion in 2007 and the war in Syria that has played out since 2011, is linked directly to the “YouStink!” protests. Considering that the various common threads between all involved in Lebanon’s current protests include US backing and an overt hatred for Syria, claims that sectarian motivation and politics do not drive “YouStink!” are patently false – an intentional misdirection predicated on “piles of garbage” and repetitive slogans claiming somehow this revolution is not just another US-engineered color revolution. But like in Armenia earlier this year, it is just another US-engineered color revolution.

First Piles of Garbage, Then Piles of Rubble

The ultimate goal is to create chaos in Lebanon sufficient enough to disrupt Hezbollah’s operations regionally against the army of terrorist the US and its regional allies, including supporters of “YouStink!” helped organize as far back as 2007. As in the past, protests in Lebanon are aimed not at improving the future of the Lebanese people, but aimed instead at disrupting the stability of neighboring Syria.

What follows these disingenuous protests is likely a re-run of what followed the so-called “Cedar Revolution” in 2005. After that admittedly US-backed protest and the withdrawal of Syrian troops from Lebanon, Israel conducted extensive air raids and even a ground invasion of the country in the following year. Despite the impression that the “Cedar Revolution” left Lebanon particularly vulnerable, US-backed Israeli operations against Lebanon ended catastrophically for Tel Aviv. The air campaign failed to achieve any strategic or even tactical objectives and the ground invasion was essentially repelled with Israel calling off the operation before reaching the Litani River – the stated objective of Israeli ground forces.

If “YouStink!” can evolve into a sufficient level of chaos undermining Hezbollah in Lebanon, and with the organization’s resources already stretched in neighboring Syria fighting terrorist armies backed by the US and its regional allies, Israel will likely be used again in a 2006-style conflict or worse in the hopes that this time the dynamics of the region are decidedly working in the West’s favor.

Regardless of the outcome of “YouStink!,” the additional pressure political destabilization in Lebanon puts upon Damascus and Tehran can only detract from efforts to restore peace and stability across the Levant.

“YouStink!” organizers claim they are fighting for the future of Lebanon. In reality, they are jeopardizing not only Lebanon’s future, but that of the entire region. They are attempting to strike a match in a region already parched by the heat of the fires of nearby conflict. If “YouStink!” succeeds in their true objectives, they will bring immeasurable suffering to all in Lebanon and to many more beyond their borders. And as in the wake of the “Cedar Revolution,” the only parties that stand to benefit are the US and its regional allies who seek nothing less than Lebanon’s complete and perpetual failure as a sovereign state.