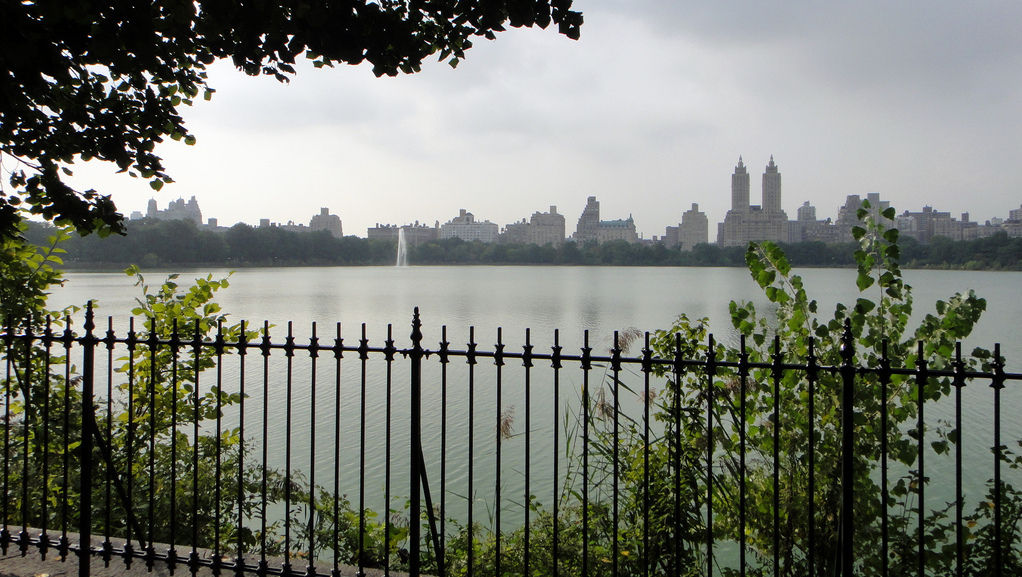 Joggers at Central Park’s reservoir this week stopped in their tracks to puzzle over the strange sheen of the usually dark-blue water, whose striking shades of turquoise and green suggest the Caribbean more than Manhattan. Other iconic bodies of water have undergone a similar transformation. The Harlem Meer, northeast of the reservoir, and Prospect Park […]

Joggers at Central Park’s reservoir this week stopped in their tracks to puzzle over the strange sheen of the usually dark-blue water, whose striking shades of turquoise and green suggest the Caribbean more than Manhattan.

Other iconic bodies of water have undergone a similar transformation. The Harlem Meer, northeast of the reservoir, and Prospect Park Lake in Brooklyn have both turned vibrant shades of green.

“I worry,” said Dimitrios Karageorgiou, 62, an architect from Astoria, Queens, who went for a walk by the Central Park Reservoir this afternoon. “I like green, but not in the water.”

The strange hues of these lakes are not signs of the Mayan apocalypse. Instead, experts reassure, they are caused by the blooming of aquatic plants that thrive in the summer sun and have appeared with unexpected vigor this year. Some are longtime inhabitants of the city’s lakes and ponds, such as duck weed, but others are new arrivals whose impact is less clearly understood.

“Just like a garden or landscape, aquatic plants bloom in response to light, heat, and nutrients,” said Maria Hernandez, the director of horticulture for the Central Park Conservancy. “The presence of aquatic plants or algae doesn’t necessarily mean a water body is unhealthy.”

The most unusual change has occurred in the Central Park Reservoir. On Sunday and Monday, it was a striking turquoise color; by Wednesday it had turned to green.

The colors are caused by several types of algae of the species Anabaena, Staurastrum, and Anacystis, said Angel Roman, a spokesman for the New York City Department of Environmental Protection. “This is a natural phenomenon as a result of waters which are calm and are at higher temperatures,” Roman said. “Since the Central Park Reservoir is not an active part of New York City’s drinking water distribution system, there is no reason to be concerned.”

Nonetheless, on Tuesday – the day before the reservoir shifted from turquoise to green – the DEP began to replace the reservoir’s water with “Catskill/Delaware water from our active drinking water distribution system.”

In Prospect Park, the green sheen covering the lake’s surface is combination of two aquatic plants, said Paul Nelson, a spokesman for the Prospect Park Alliance. One is duck weed, a common seasonal bloom, and another is type of fern called Azolla. Nelson said that Azolla is a native species and its appearance does not threaten aquatic life, but that it is currently present in significantly greater quantities than in previous years.

“This year seems to be much more noticeable,” Nelson said. He suggested that this year’s warm winter may have prevented the usual seasonal die-off of Azolla, and that the hot, early summer may have lengthened its growing season. If the Azolla continues to thrive throughout the summer, it may take on a reddish color in the fall, the Prospect Park Alliance predicts

In the Harlem Meer, the water’s green appearance is caused by duck weed, said Hernandez of the Central Park Conservancy. The plant blooms every summer and is named for the waterfowl that savor it as food.

“From a distance, it appears as if there’s a green film on top of the water body,” Hernandez said. “Up close, you can make out the small, individual plants.”

In each case, authorities say they are closely monitoring the aquatic blooms. The Central Park Reservoir is maintained by New York City Department of Environmental Protection, the Harlem Meer is managed by the Central Park Conservancy, and the Prospect Park Lake is overseen by the Prospect Park Alliance. While the plants are not toxic in any way, algae require oxygen to grow, and too much of it can deprive other aquatic life of the air they need. Duck weed and other blooms can clog up the surface of waterways.

The Prospect Park Alliance periodically skims the surface of the lake to prevent too much duck weed and Azolla from accumulating.