In this March 13, 1964 file photo, President Lyndon Johnson, right, talks with Secretary of Defense Robert McNamara, center sitting, after McNamara returned from a fact-finding trip to South Vietnam, at the White House in Washington. Fifty years ago Sunday, Aug. 10, 2014, reacting to reports of a U.S. Navy encounter with enemy warships in the Gulf of Tonkin off Vietnam, reports long since discredited, Johnson signed a resolution passed overwhelmingly by Congress that historians call the crucial catalyst for deep American involvement in the Vietnam War. (AP Photo/File)

KITCHENER, Ontario — As this is being written, Congress is experiencing extensive and dramatic hand-wringing as it decides between doing what is best for the country and the world or doing what is best for the American Israel Political Affairs Committee. This is no easy task for members of Congress, especially Democrats who, on the one hand, want to assure a “victory” for President Barack Obama, but who are also loathe to displease the Israeli lobby. Whether preventing a war factors into their deliberations is not known.

AIPAC and its countless minions in Congress are painting the recent agreement reached between Iran and the P5+1 (China, France, Russia, the United Kingdom, and the United States, plus Germany), as nothing short of the end of Israel.

If this deal preventing Iran from developing nuclear weapons is approved, they warn darkly, Iran will secretly develop nuclear weapons. This will mean the destruction of Israel, they say. But if it isn’t approved, Iran will develop such weapons. This, they say, will also mean the destruction of Israel. Feel free to re-read those sentences whenever time allows.

From this point of view, the only alternative is war, with the ostensible purpose of destroying Iran’s nuclear capabilities — capabilities that the Islamic Republic has always said are for peaceful energy purposes. Yet the risk of Iran ever having nuclear weapons is too great. If it did obtain them, then Israel would have a hostile nation to counterbalance its power in the Middle East, and, of course, it doesn’t want that competition. And whatever Israel wants, the U.S. wants. Hence the fear-mongering.

This is a tried-and-true method in the U.S. of getting wars started: Tell lies about some situation that can be construed as a threat to U.S. security (or in this case, Israel’s national security, which seems to be threatened by just about everything), get the populace riled up with jingoistic fervor, watch pompous politicians proclaim their great patriotism on the evening news, and then go bomb some country or other.

The U.S. again gets to flex its international muscle, the citizenry is, for some bizarre reason, proud of the destruction the country has caused, the weapons manufacturers spend all their time tallying their astronomical profits, and all is once again right in the twisted world of U.S. governance.

A few examples will suffice to show that this means of starting wars has been used repeatedly. The examples discussed herein do not by any means represent an exhaustive list, but only show that lying to the world to make the citizenry believe that the U.S. or its citizens had been threatened in some way, and that war was the only response, is business as usual in the U.S.

Less than 40 years after the American Revolution, the still-new U.S. government felt constrained in areas of international trade, despite tremendous growth in such trade in the years leading up to the war. In 1811, Britain issued an Order-in-Council, excluding American salted fish from the West Indian colonies and imposing heavy duties on other U.S. imports. This, the U.S. could not countenance.

Additionally, although the heady concept of Manifest Destiny would not actually be defined for several more years, territorial expansion was always on the minds of the leaders of the fledgling nation. Canada, with its rich abundance of natural resources and wide expanses of land, was coveted.

Yet trade and expansion were not foremost on the minds of the populace, at least not sufficiently for them to support a war. But many nations at this time had a policy of impressment, wherein the ships of another country were boarded, and their sailors kidnapped and forced to work for the kidnapping navy. This was something with which the common man and woman could identify. Although this wasn’t a common occurrence, it was exaggerated and combined with the trade issues to introduce the rallying cry of “Free Trade and Sailor’s Rights,” Carl Benn wrote in his 2003 book “Essential Histories: The War of 1812.” However, this wasn’t a simple, spontaneous cry of justice. It seems to have been promoted by annexationists running the government, and was sufficient for the U.S. to start an unsuccessful war against Canada.

Fast-forward to the end of the 19th century. On Feb. 15, 1898, the battleship Maine exploded in Havana harbor, killing 266 men. According to Hyman George Rickover, in his 1976 book “How the Battleship Maine was Destroyed”:

“Lieutenant Frank F. Fletcher, on duty at the Bureau of Ordnance, wrote in a personal letter to [Lieutenant Albert] Gleaves: ‘The disaster to the Maine is the one topic here now. Everybody is gradually settling down to the belief that the disaster was due to the position of the magazine next to the coal bunkers in where there must have been spontaneous combustion.’” Theodore Roosevelt (center front, just left of the flag)
and his “Rough Riders,” 1898.

The official inquiry into the disaster, however, concluded that an underwater mine had been the culprit. With the battle cry “Remember the Maine,” the U.S. quickly declared war on Spain.

But this “inquiry” was more than a bit flawed. Two widely-recognized experts in ordnance volunteered their services for the investigation, but were not invited to participate. One of them, Prof. Philip Alger, had greatly displeased Secretary of the Navy, and future president, Theodore Roosevelt, when he commented on the disaster in an interview for the Washington Evening Star a few days after it happened. He said, in part, the following, as reproduced by Rickover:

“As to the question of the cause of the Maine’s explosion, we know that no torpedo that is known to modern warfare, can of itself cause an explosion of the character of that on board the Maine. We know of no instances where the explosion of a torpedo or mine under a ship’s bottom has exploded the magazine within. It has simply torn a great hole in the side or bottom, through which water entered, and in consequence of which the ship sunk. Magazine explosions, on the contrary, produce effects exactly similar to the effects of the explosion on board the Maine. When it comes to seeking the cause of the explosion of the Maine’s magazine, we should naturally look not for the improbable or unusual causes, but those against which we have had to guard in the past.”

But Roosevelt was anxious to establish the U.S. as a world power, especially in terms of its Navy. By accusing Spain of blowing up the ship, he had the perfect excuse to launch the Spanish-American War.

Off the coast of China and northern Vietnam is the Gulf of Tonkin, which was the staging area for the U.S. Seventh Fleet in the early 1960s. On the evening of Aug. 4, 1964, the U.S. destroyers Maddox and the C. Turner Joy were in the gulf, when the Maddox’s instruments indicated that the ship was under attack or had been attacked. Both ships began firing into the darkness, with support from U.S. warplanes. However, they “later decided they had been shooting at ghost images on their radar. … The preponderance of the available evidence indicates there was no attack.” Yet something needed to be done about Vietnam, with anti-Communist hysteria still rampant in the U.S., and this gave Congress the perfect ploy to escalate the war. This non-incident was presented to the world as an act of aggression against the U.S. Congress quickly passed the Gulf of Tonkin resolution. By the end of the following year, the number of U.S. soldiers invading Vietnam increased from 23,000 to 184,300. Eleven years later, with over 55,000 U.S. soldiers dead, hundreds of thousands wounded, and, by conservative estimates, 2,000,000 Vietnamese dead, the U.S. fled Vietnam in defeat.

In order to gain support for the Gulf War of 1990, Congress and President George Bush relied heavily on what is commonly referred to as the Nayirah testimony. In early October 1990, a 15-year-old girl referred to only as “Nayirah,” who claimed to have been a hospital volunteer, testified of seeing babies dumped by Iraqi soldiers from hospital incubators. This, in the eyes of Congress and the president, highlighted the monstrosity of Iraq, and was widely used to gain support for the war.

However, like nearly all of the information the government feeds to the citizenry to start its wars, this testimony was all lies. “Nayirah” was actually the daughter of the Kuwaiti ambassador to the U.S. She later admitted that she had once visited the hospital in question, but only for a few minutes. She did see an infant removed from an incubator, but only very briefly. A group called Citizens for a Free Kuwait had hired one of the world’s foremost public relations firms, Hill and Knowlton, to create the illusion of legitimacy for an invasion. They coached “Nayirah” on what to say and how to say it when she appeared before Congress.

We will do no more than mention the U.S.’s drafting of a letter for Grenada to send to the U.S., requesting military intervention when that small island nation’s government was overthrown in 1983. Nor will we dwell on the weapons of mass destruction that Iraq was said to possess in 2002, which justified in the eyes of U.S. citizens the disastrous 2003 invasion of that nation. But as we look at this ugly record of lies that the U.S. has used to expand its territory, power and/or influence around the world, we must consider that it is once again using the same tactics to march the nation toward war with Iran. 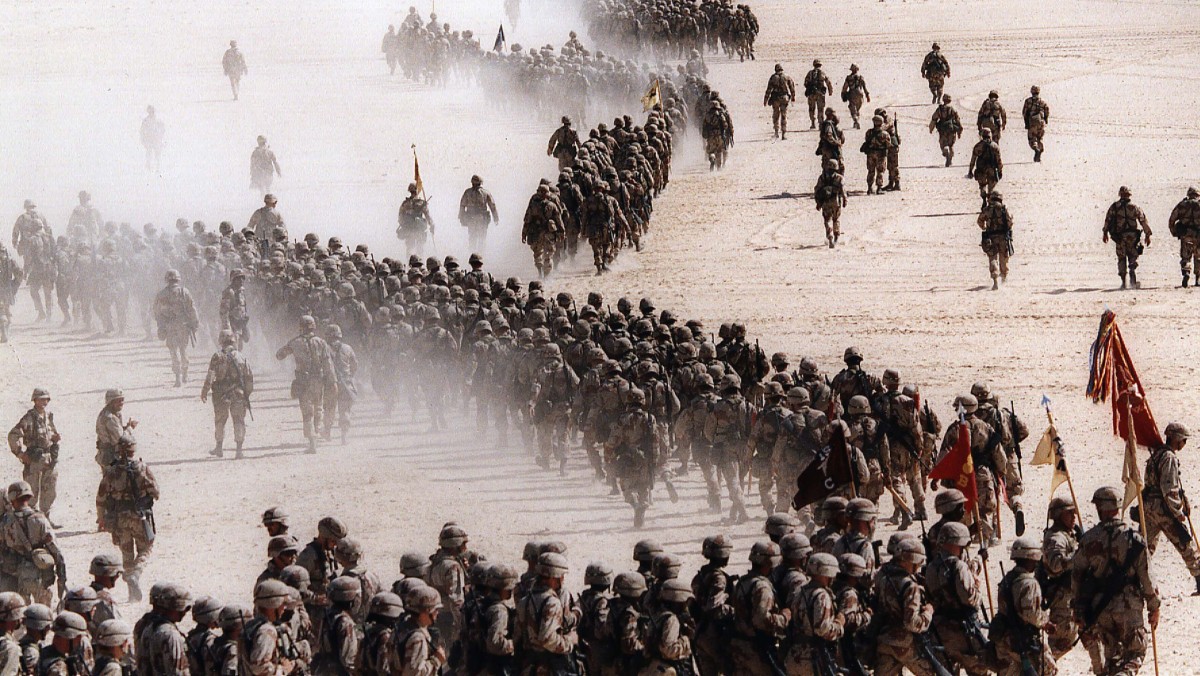 Responding to Iraq’s invasion of Kuwait, troops of the U.S. 1st Cavalry Division deploy across the Saudi desert on Nov. 4, 1990 during preparations prior to the Gulf War. (AP Photo)

The U.S. for generations was successful in deceiving its citizens, and a good part of the world, that it was a beacon of freedom and peace, despite the fact that it has been at war for most of its bloody existence. That myth began to crack during the Vietnam War, broke into pieces with the Iraq War, and may have been dealt a fatal blow by the U.S.’s support of Israeli atrocities in 2014.

Regardless of the outcome of the congressional vote on the Iran agreement, the U.S. will find itself less able to lie its way into corporate wars in the future. That capacity diminished during the lead-up to the Iraqi invasion, and while no one ever went broke betting on the gullibility and short-term memory of the U.S. citizenry, people are beginning to wake up. When they finally do, much of the carnage in the world will end. That day cannot come soon enough.