A protester holds up an poster of Uncle Sam during a rally protesting U.S. regime change efforts in Venezuela at the Miraflores presidential palace in Caracas, Venezuela. (AP/Ariana Cubillos)

Some anniversaries are widely observed in the West: Japan’s attack on Pearl Harbor, Holocaust Memorial Day, the September 11 atrocities, and so on. Yet there are other undesirable anniversaries that have been largely disappeared. 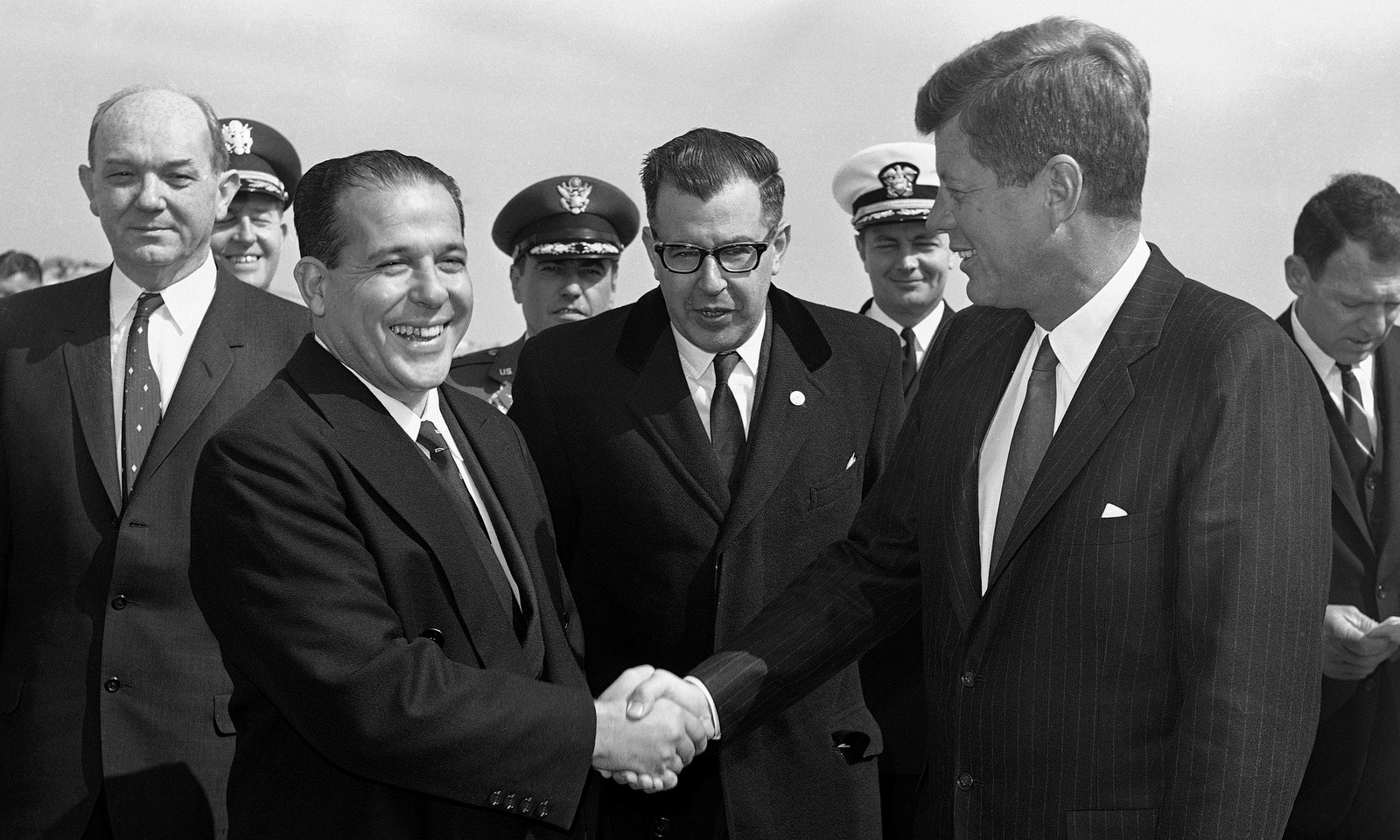 Considering its vast size and abundant natural resources, Brazil should long have been one of Latin America’s richest countries. Instead, it has been something of a horror story, as Brazilians have been repressed and brutalized across decades by military dictatorships. Brazil’s plight strikes a common theme across a region of the world in which the great superpower, the United States, has sought to continually control.

Brazil especially had come under the unblinking eye of the empire during the 1960s. US president Lyndon B. Johnson was hell-bent in ensuring such a massive country did not become“the China of the 1960s”. Johnson was referring indiscreetly to Mao Zedong, a Communist revolutionary whose influence in China continued to rise.

US concern about Brazilian sympathies increased in the early part of that decade. In September 1961, left-wing nationalist Joao Goulart became the nation’s democratically elected president, spreading panic in the liberal Kennedy administration. Goulart began implementing structural reforms in the South American country, that would help integrate the general population into society. The United States was loathe to sit helplessly by as this movement came within “our hemisphere”, as President John F. Kennedy described it.

Goulart, also known as “Jango”, was hostile toward US capitalist democracy that seeks to primarily serve elite powers. Shortly before his death, Kennedy had been preparing the groundwork to oust Goulart, with the coup (March 31-April 1) occurring less than five months under his successor’s, Johnson. “We just can’t take this one [social movement],” warned Johnson. Goulart’s toppling received crucial CIA funding and arms, while Brazil was placed under a neo-Nazi dictatorship that tortured their people for over 20 years. A couple walks by a mural in downtown Guatemala City commemorating the 50th anniversary of a CIA backed military intervention that ousted leftist president Jacobo Arbenz in Guatemala. (AP/Rodrigo Abd)

Guatemala, a small central American nation, remains a ghastly nightmare to this day. Located almost a thousand miles south of Mexico, Guatemala’s troubles can be traced back 500 years when Spanish explorers “discovered” the region. Almost inevitably, the Spanish conquistadores (conquerors) brought mass death and disease to the native populations. For three centuries, the country languished under Spanish colonialism before declaring itself independent in 1821. During the first half of the 20th century, Guatemala was ruled by dictators linked to the United Fruit Company (UFC), a powerful US-owned corporation, known as “the octopus”.

The causes for her suffering (in living memory) can be traced to President Dwight D. Eisenhower implementing a CIA-run coup that installed further autocratic regimes. Guatemala had been enjoying a 10-year revolution (1944-54): firstly, under Juan Jose Arevalo, who introduced a minimum wage and increased funding to education. Arevalo’s democratically elected successor in 1951, Jacobo Arbenz, instituted land reforms to grant property to landless peasants. Such inclusive measures were deemed an unacceptable threat to US hegemony over the Western hemisphere.

Arbenz’ policies threatened the UFC, which had long been exploiting Guatemalan workers, and which had direct ties to Eisenhower’s administration (the Dulles brothers). The UFC aggressively lobbied Eisenhower, who authorised the CIA to aid a force led by the impending right-wing dictator, Carlos Castillo Armas. With further threat of invasion by American forces, the Guatemalan army eventually refused to fight on – an error of historic proportions. Almost four decades of civil war followed, as successive US-backed dictators committed atrocities such as genocide against the Maya peoples. Few countries have experienced such pain and upheaval as Argentina did during the middle part of the 20th century. With an enormous coastline stretching along the riches of the Atlantic Ocean, and a landmass second only to Brazil in South America, power in the country has been contested with great vitriol.

Argentina witnessed a total of six coups since 1930, beginning in that year with the ousting of democratically elected president, Hipolito Yrigoyen (“the father of the poor”). Right-wing military dictator, Jose Felix Uriburu, led the putsch against Yrigoyen, so initiating decades of agony for Argentines.

The 1976 coup was the final forced government change that took place in the country in the last century. The US-backed Argentine Armed Forces installed the most vicious Latin American military dictatorship of all, responsible for tens of thousands of murdered and “disappeared”, under convicted war criminals such as Jorge Rafael Videla and Reynaldo Bignone. Revealingly, the Nazi-style regime was a favorite of US president Ronald Reagan.

The coup toppled Isabel Peron, the first female leader in world history, wife and successor of deceased ex-president Juan Peron. Henry Kissinger, the US Secretary of State, met with several Argentine military commanders suggesting they crush their enemies before human rights issues become known to the American public. “We read about human rights problems, but not the context. The quicker you succeed the better,” he said, and not the first time Kissinger (Nobel Peace Prize winner) was implicated in war crimes. 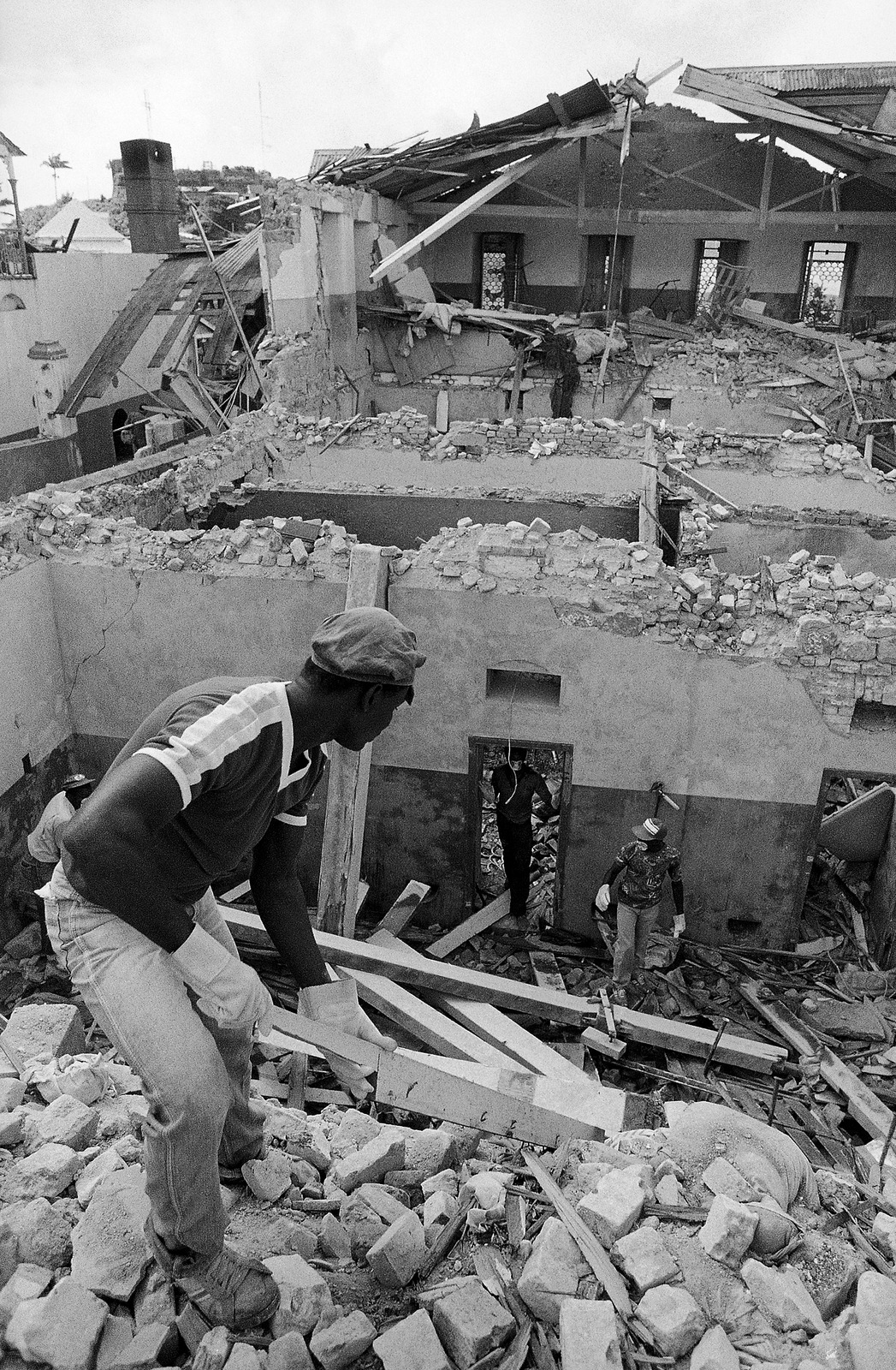 Workers sift through the bombed remains of the Richmond Hill Mental Hospital in St. George’s, Grenada on Friday, Nov. 4, 1983. The institution was bombed by U.S. forces during their invasion of Grenada. (AP/Pete Leabo)

Grenada, situated not far from the coast of Venezuela, is a tiny nation of less than 350 square kilometres. Yet it was somehow perceived as a threat by US planners to its hegemonic control over the “free world”. Grenada had gained independence in 1974, after enduring three hundred years of French and British colonialism.

The American invasion of the Caribbean island (under President Reagan) drew a scathing international response from the UN General Assembly. It “deeply deplores” the intervention, which “constitutes a flagrant violation of international law”, further condemning “the deaths of innocent civilians… the killing of the Prime Minister [Bishop].”  The intervention was even opposed by most NATO countries and US allies such as France, Portugal, Australia, Spain and the Netherlands.

All irrelevant criticism for elite Western figures that believe the US should be a law unto its own. The usual pretexts for the invasion of Grenada were put forward by the US government, and obediently relayed by the free press: Grenada was a “Marxist dictatorship” and the US army was on a “rescue mission” to defeat a Cuban military presence defending “this outpost of Soviet imperialism”. The true reason for the attack? To expel a government not amenable to American hegemonic demands, and that may act as a further example of defiance (after Cuba) – the abysmal after effects for Grenadians was quickly airbrushed from history. Juan Bosch has been described as one of the Dominican Republic’s “greatest thinkers and visionaries of all time”. Commonly known as “Professor Bosch”, he was a man of renowned ability, be it as a politician, historian, or writer.

Sadly, Bosch’s time as president lasted less than seven months – during such a limited time in power, he had still left his mark. Having always denied being a Communist, Bosch’s politics were undoubtedly left-leaning, and he had “a deep friendship” with revolutionaries like Fidel Castro. While Bosch had been exiled from the Dominican Republic, he had spent time in countries like Cuba and Venezuela, developing his ideas. None of this was lost on the US.

Indeed, American interference in the Dominican Republic traced back to the early 20th century of the William Howard Taft and Woodrow Wilson administrations. Wilson, for example, ordered the invasion of the country by US marines in 1916, their presence lasting over six years – an occupation reviled by the Dominican population. The democratic election of Bosch in February 1963, replacing a military junta, caused undue concern in elite American circles.

Their fears were quickly realized as Bosch undertook progressive steps the Dominican population had never known before (or since), initiating plans to reduce poverty, declaring labor rights, strengthening unions, rights for farmers, and so on. Bosch was declared “a Communist” by pro-US business magnates and members of the army. On September 25, 1963, a group of commanders led by Elias Wessin y Wessin, with crucial US support, expelled Bosch from the country.