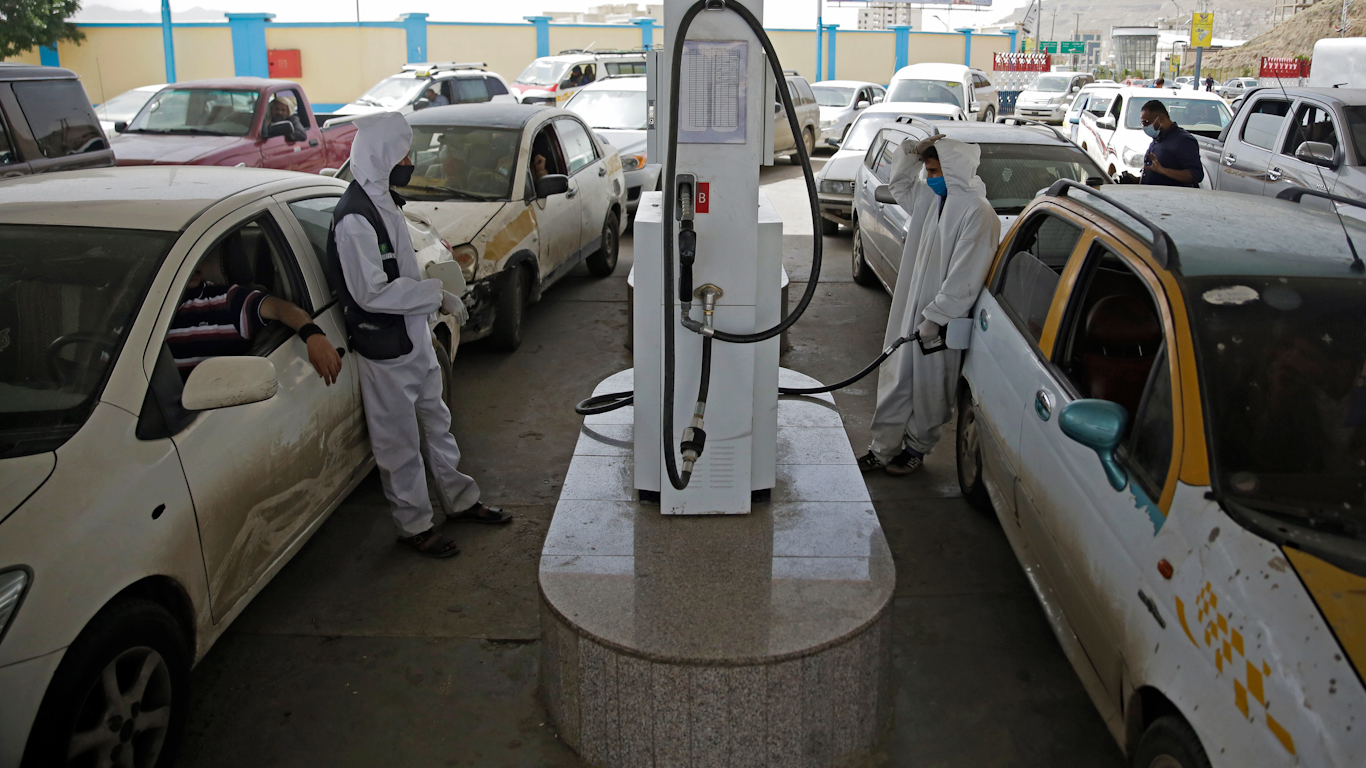 YEMEN-SAUDI BORDER – Under the scorching midday sun, Hakem Matari Yahya al-Buttaini’s brother was on the cusp of finally being able to purchase the 40 liters of diesel fuel for which he had been waiting in line for seven days, when he got the call. Hakem had been executed by Saudi Arabia and the news had just spread through local media. Hakem was among seven Yemenis executed by Saudi Arabia on Saturday.

As much of the world’s attention remained focused on Russia’s war on Ukraine, the Saudi regime carried out a mass execution, killing 81 people in a single day, including the seven Yemenis and civilians from the Kingdom’s eastern provinces. According to Saudi state media, the condemned were accused of various crimes, including terrorism, kidnapping, rape, and traveling to a regional conflict zone. According to the families of Hakem and Haider Ali Haider al-Shawhan, another man executed in Saturday’s mass execution, both Hakem and Haider were prisoners of war captured at the Yemen-Saudi border in 2018 while fighting to thwart the advance of Saudi fighters towards Yemen. Members of the al-Shawhan and al-Buttaini families agreed to speak to MintPress News on the condition of anonymity.

Yemen’s National Committee for Prisoners Affairs said that two of the executed Yemeni prisoners were on a list of people slated to be released in an UN-brokered prisoner exchange, adding “the Saudi crime is a dangerous precedent that threatens serious consequences which cannot be tolerated.”

Despite the shocking news, Hakem’s brother did not leave the fuel line. “We’re in desperate need of diesel to run our water pump. If I leave my place, we won’t only stay in darkness, but our women and children won’t be able to drink,” he said. In many of Yemen’s northern cities, obtaining fuel can be the difference between life and death. Unlike in Ukraine, where power has not yet been cut, power outages in northern Yemen have been fatal. Even in the Saudi-controlled southern provinces, an hour and a half of power followed by eight-hour blackouts are the norm.

This reality, which has been largely ignored by the same Western organizations spurred into action by Russia’s wanton violence in Ukraine, has been a conspicuous feature of Saudi Arabia’s war in Yemen. In the past two weeks alone, hundreds of Yemenis, many of them hospital patients relying on life-saving medical devices, have died as a direct result of the lack of fuel needed to power generators, according to the government in Sana’a. Starving Yemen of petroleum products has been a tactic employed by the Saudi government since the onset of its now seven-year-long war on the country. However, its most recent blockade is significantly more extensive than previous ones, largely thanks to U.S. policies.

Since November 2020, U.S. Navy ships in the Red and Arabian seas have not allowed oil tankers to enter Yemen unless approved by the U.S. Treasury, even if those oil tankers are checked and issued permits by both the Saudi-led Coalition and the United Nations, a representative of the Yemen Petroleum Company (YPC) told MintPress. The blockade has been carried out under the pretext of “preventing Iranian oil from reaching Houthis,” with oil imports limited to the Saudi-controlled Port of Aden. Since February 24, when Russian forces began their wide-ranging assault on Ukraine, Saudi Arabia has been preventing fuel trucks from entering northern Yemen under the same pretext. In the rare case when a tanker is allowed to enter, the price per liter of petrol is nearly double.

Dozens of hospitals, water pumping stations, bakeries, power stations, gas stations, even cleaning trucks, have already stopped operating owing to fuel shortages. In the north, the lack of fuel has reached a critical point. Panic has spread and essential services responsible for the care of over 15 million Yemenis – such as the Water and Sanitation Corporation, Ministry of Transportation, and the General Electricity Corporation – are barely functioning.

On Monday, the UN said that Yemen’s already dire hunger crisis is “teetering on the edge of outright catastrophe,” adding:

Today, more than 17.4 million Yemenis are food insecure; an additional 1.6 million are expected to fall into emergency levels of hunger in coming months, taking the total of those with emergency needs to 7.3 million by the end of the year.

Yemen’s fuel crisis has no doubt contributed greatly to the famine.

Yemen’s army, loyal to Ansar Allah, has responded to the dire humanitarian situation by announcing a new operation dubbed “Break The Siege,” against Saudi oil facilities. On Saturday, nine drones targeted a Saudi Aramco refinery in the Kingdom’s capital, Riyadh. Another six drones targeted Saudi state-run Aramco facilities in southwestern Saudi Arabia, as well as other related targets in the oil-rich Kingdom, which acknowledged the attacks and promised reprisal.

The attack on Aramco facilities, the backbone of the Saudi oil economy, comes as oil prices are rising at record rates and are predicted to break the $200 per barrel barrier as Russia’s invasion of Ukraine heats up – a fact that Ansar Allah is likely hoping to exploit by targeting Saudi oil infrastructure and driving up the price of crude oil in a bid to punish the United States for its support of the Saudi-led war.

Abdulmalik al-Houthi, the leader of Ansar Allah, said during a meeting with tribesmen on Monday that “the [Saudi] aggression has caused great suffering to our people in obtaining oil derivatives [and] we will not stand idly by.” According to high-ranking Anar Allah military sources that spoke to MintPress on the condition of anonymity, Ansar Allah hopes to capitalize on rising oil prices by continuing to target Saudi oil infrastructure until the United States halts its support for the Saudi blockade.

Saudi officials reached out to Ansar Allah on Tuesday to negotiate a halt on attacks on Saudi oil facilities. The offer came despite Riyadh, the UAE, and the U.S.’s designation of Ansar Allah as a terrorist organization. A source inside Ansar Allah told MintPress that the offer will likely be rejected, as the group does not trust the Saudi regime to act in good faith.

Referring to the Biden administration’s support for the Saudi-led war, a military official stated:

At a time when the Biden administration banned the import of oil from Russia, they [the Saudi-led Coalition] are preventing the entry of fuel into [Yemen] despite the [humanitarian] disaster. We will respond by bombing Saudi oil fields and refineries and share our hard times with the world – particularly the Americans and Europeans, thanks to Biden`s policy.

Fear that US will trade more support for Saudi oil

Some Yemenis who spoke to MintPress fear that President Joe Biden will increase support to Saudi Arabia and the UAE in exchange for an increase in their oil output to counterbalance disruptions in the global market sparked by sanctions on Russia. Some even went as far to say that if the United States continues to support the blockade on Yemen and provide support to the two oil-rich countries, they will not only support the targeting of Gulf oil facilities but will volunteer to fight alongside Russian forces in Ukraine, especially if Yemen receives fuel aid from Russia.

This comes as unconfirmed reports are surfacing in Yemen that militants are being recruited to fight alongside Ukrainian forces, including from groups with ties to extremist organizations, such as the controversial Islah Party. Hussein al-Izi, a high-ranking Ansar Allah official and deputy minister of foreign affairs, recently accused Islah of using oil to pay recruits to fight in Ukraine in exchange for the removal of Islah from Western lists of terrorist organizations. MintPress was not able to independently confirm these reports.