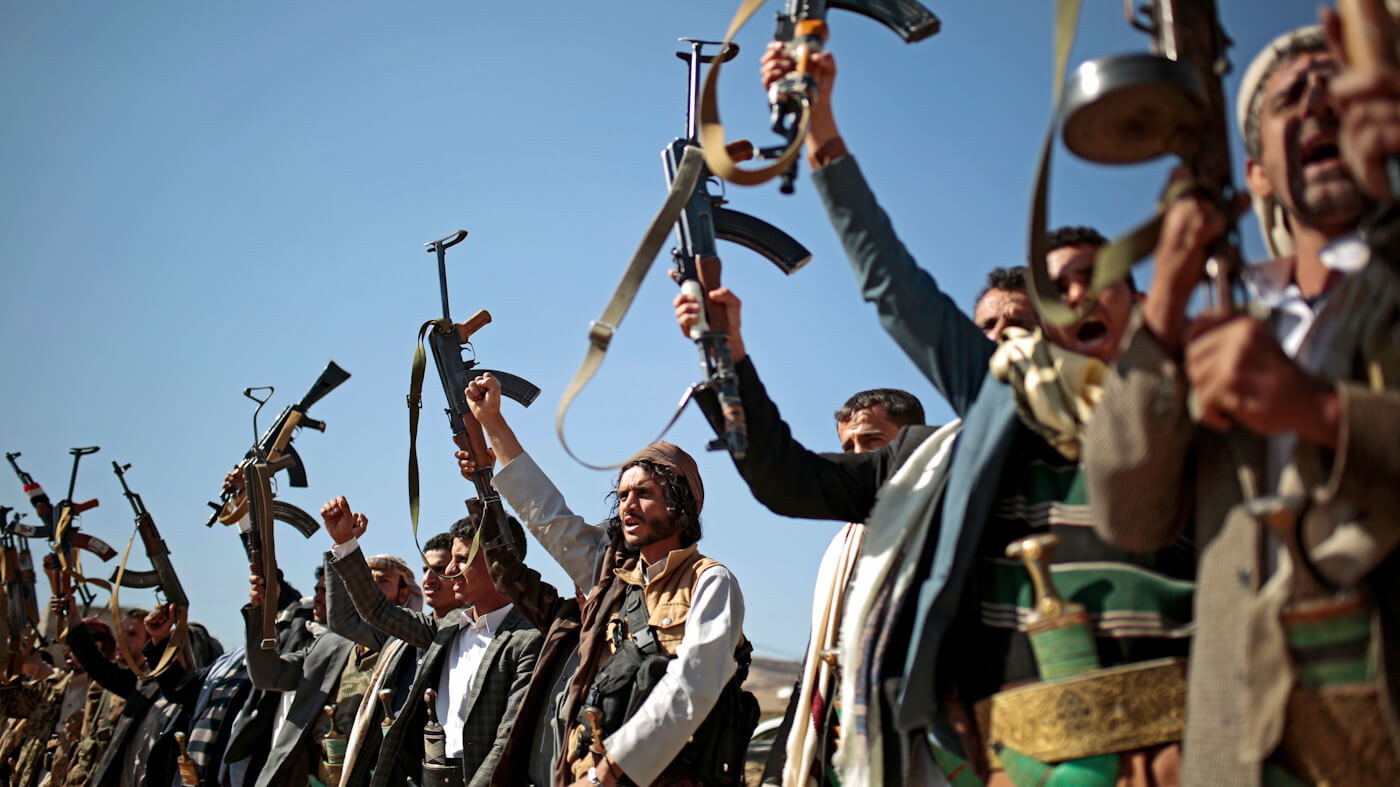 AL-BAYDA, YEMEN — For the past two weeks, Yemeni military forces loyal to the Houthis have been waging a fierce campaign to rid the country’s southern al-Bayda and al-Dali provinces from al-Qaeda, ISIS and Saudi Coalition fighters. Dozens of cities, villages, and military sites in the provinces have been captured in the campaign, which was sparked in part in retaliation for ongoing Saudi attacks on civilian targets.

In al-Bayda, Houthi-allied fighters supported by local tribes have killed dozens of al-Qaeda and ISIS who were seeking cover in the rough terrain of the Helmous mountain range where the extremist groups have set up a network of bases and training camps in the mountains’ caves. The Helmous range links the Directorates of Thu Na’em, al-Zaher, and Yaff’a. Houthi-allied fighters also recovered weapons caches — including U.S.-made weapons — in the campaign and forced the Saudi-backed extremist’s groups to flee to the Yaff’a district.

The fighting has now moved to the outskirts of the al-Nasefah district in al-Zaher. “The most important stronghold of al-Qaeda in the province of al-Bayda has been seized,” Mohammed al-Hassani, a resident of the region and an expert in armed groups, said.

In the al-Dali province, Yemen’s army, which backs the Houthis, launched a massive military operation to consolidate control over the southern province, capturing at least 100 villages and dozens of strategic sites in the province’s mountains and highlands. The army also wrested control over the infamous 130th Brigade, a fighting force used by the Coalition that has gone largely unopposed since 2016. The Damt and Gadabah districts were also captured by Houthi-allied forces in the campaign. Footage released by Houthi-aligned Al-Masirah shows large caches of weapons supplied by Saudi Arabia as well as improvised explosive devices.

Speaking at a press conference in Yemen’s capital city of Sana’a on April 19, a spokesman for Yemeni Armed Forces, Brigadier General Yahya Saree, told reporters that the “military operation launched by our forces, which lasted 96 hours, ended in the clearing of the battlefields of the Oud, Khashbah, and Hamk areas, which comprise 250 square kilometers.”

The Saudi-led Coalition has so far been silent about the progress of the Yemeni army in the south of Yemen, which has been occupied by Coalition forces since 2015. Brigadier General Ahmad Al-Hmeikani, appointed by the Coalition as head of police in the al-Bayda district, has resigned following the campaign, saying, “their fighters on the ground did not get help from the Coalition to prevent the advance of the Houthis.”

More than 70,000 people have been killed in Yemen since January 2016 according to a new report by the Armed Conflict and Location Event Data Project (ACLED) issued last Thursday, including 10,000 people who were killed in the past five months alone. The ACLED report recorded 3,155 direct attacks that targeted civilians, resulting in more than 7,000 civilian deaths.

Elsewhere in Yemen, Houthi air defenses shot down three Coalition drones that were flying over the country’s western coastal provinces of Hodeida and Najran, just 800 kilometers south of the Saudi capital, Riyadh. Two of the drones were shot down on Monday as they were flying a reconnaissance mission over the Kilo-16 district in Hodeida. The third drone was downed as it was flying over the Boqa’ desert of Najran.

Last Friday, Houthi air defenses shot down a Chinese-made Wing Loong drone belonging to the Coalition as it circled the Bani Mu’ath district. Eight Coalition drones have reportedly been shot down by Houthi-allied forces so far this month.

Yemeni forces loyal to the Houthis also struck the Saudi Istiqbal military base in Saudi Arabia’s southwestern region of Jizan using the newly unveiled Badr-F ballistic missile. The strike reportedly killed nine Saudi military officers and dozens of rebel fighters allied with the Coalition. Yemen’s Operations Command Center distributed footage of the Badr-F, filmed by a Yemeni Air Force drone as it targeted the base.

The missile, which is designed to strike Saudi Coalition military targets with tremendous destructive power, explodes at a height of 20 meters and sends up to 14,000 fragments in a 350-meter radius to the ground. The missile purportedly boasts a pinpoint accuracy of three meters. Yemeni forces have used the missile to advance ground troops and thwart multiple Coalition military incursions in recent weeks.

Saudi forces operating in the border area between western Yemen and Saudi Arabia have effectively been neutered in recent months, following a precipitous increase attacks in the region by Houthi-allied forces. Hoping to cut its losses, Saudi Arabia has replaced its troops in the region with mercenary fighters from Yemen and Sudan, as well as, reportedly, thousands of extremist fighters from Syria. “The military escalation at the borders is placing great pressure on the Saudi regime and the forces of aggression,” Abdul Malik al-Houthi, the leader of Ansar Allah, said to Houthi-run al-Masirah TV on Monday.

Al-Houthi went on to say that Yemen’s ballistic missiles could be fired against vital and sensitive targets in Riyadh, Dubai, and Abu Dhabi should the Saudi-led Coalition escalate its military campaign against Hodeida: “We have strategic, vital, and sensitive targets that could be targeted in case of any escalation in al Hodeida. The forces of aggression understand what we mean.”

Al-Houthi also said that if the Coalition war on Yemen continues, the economy and investments in the United Arab Emirates, the primary partner to Saudi Arabia in the Coalition, will be exposed to real risks. He revealed that the Yemeni army has produced advanced naval weapons that will be used when needed, but gave no additional details.

Al-Houthi revealed secret negotiations between the Ansar Allah, the political wing of the Houthis, and the Saudi regime to end the Saudi war against Yemen but has hinted that ending the war would require serious will from the Saudi regime to change its vision towards Yemen’s relationship with the kingdom after the war. “The Saudis should be convinced that what is a factor of reassurance and stability to Saudi Arabia is the relationship of mutual respect and good neighborliness with Yemen,” al-Houthi concluded.

Feature photo | Tribesmen loyal to the Houthis attend a gathering to show their support for peace talks in Sweden, in Sanaa, Yemen, Dec. 13, 2018. Hani Mohammed | AP