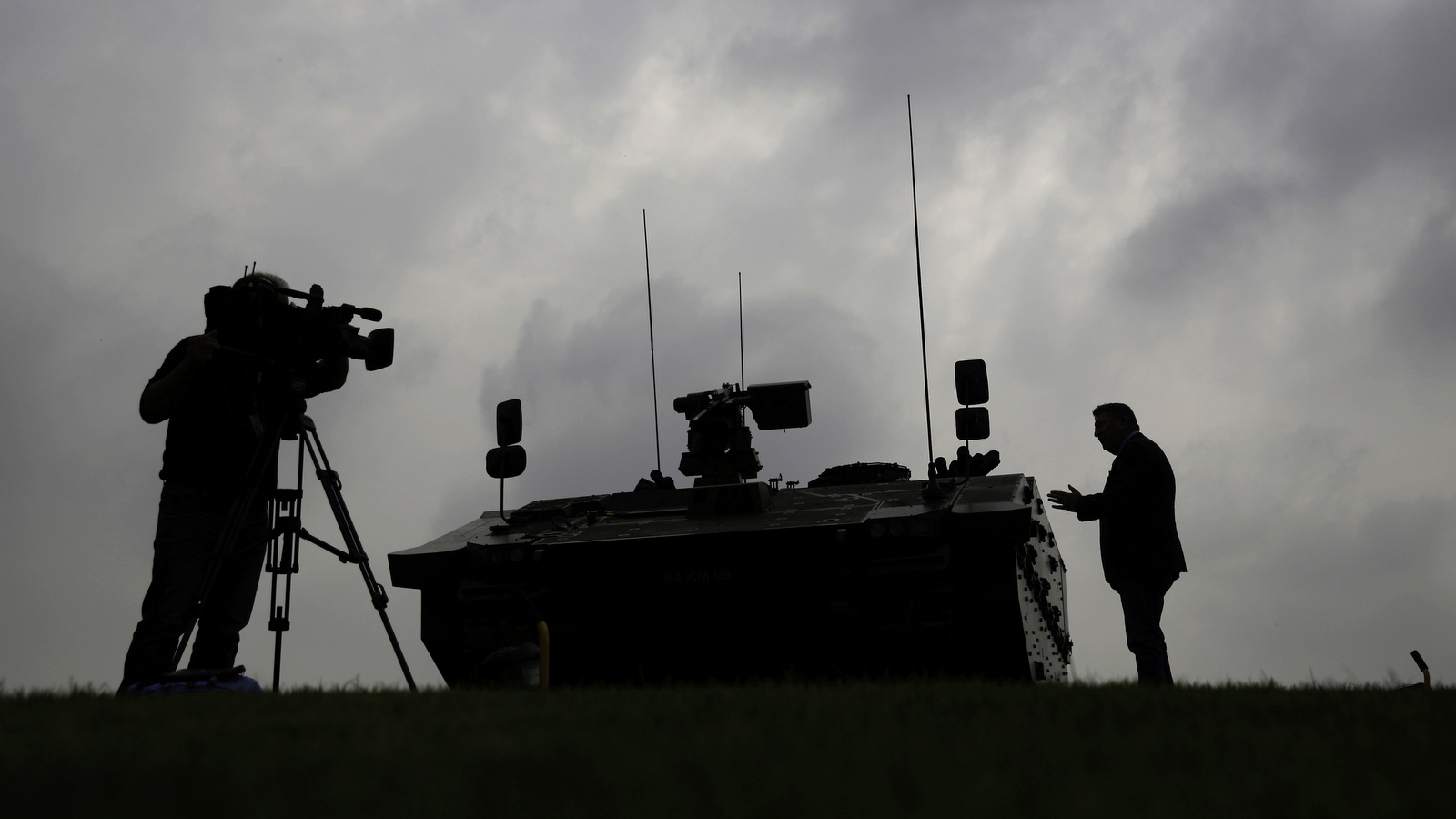 Wikileaks’ recent disclosure of the CIA’s hacking and surveillance capabilities highlights a frightening new reality for today’s journalists. Considering the CIA’s penchant for silencing and intimidating reporters and editors, journalists will have to overcome greater odds to protect the public’s right to know.

A journalist is silhouetted as he speaks to a cameraman beside a British military armored vehicle at a NATO summit in Newport, Wales. (AP/Matt Dunham)

MINNEAPOLIS– This past Tuesday saw the biggest shake-up in the tech world since Edward Snowden first revealed the full extent of the National Security Agency’s “dragnet” surveillance program nearly four years ago.

Thanks to Wikileaks’ first publication of its “Vault 7” documents, which detail the CIA’s global covert hacking program, the CIA’s ability to bypass encryption and turn practically any Internet-enabled electronic device into a covert microphone is now in the realm of public knowledge.

While these revelations are troublesome for everyone, they are particularly concerning for journalists, who often rely on encrypted apps and technological privacy for sensitive stories. Wikileaks itself highlighted this point in a tweet made soon after “Vault 7” was released: “CIA hacker malware a threat to journalists: infests iPhone, Android bypassing Signal, Confide encryption.”

This threat is particularly concerning given that the U.S. government – particularly the CIA – has a documented penchant for silencing and intimidating journalists with whom they take issue. Encrypted messaging programs have been touted as a solution for journalistic privacy in the post-Snowden world. The messaging app Signal, in particular, has been endorsed by prominent journalists and even Snowden himself.

However, some journalists have noted that Signal and other similar apps do not necessarily protect those under targeted surveillance, a concerning fact given that journalists are more likely to be targeted than other members of the general public for surveillance.

Not only has “Vault 7” now proven that encrypted messaging apps have been compromised, it has also shown that the CIA’s hacking capabilities span nearly every type of telecommunications device available to consumers, including smartphones, tablets, personal computers and routers. In addition, the CIA is able to target everything from data and applications to operating systems and hardware, making no Internet-enabled consumer electronic device safe from CIA surveillance.

Among the CIA’s hacking tools detailed in the release was a tool that allows the CIA “to bypass the encryption of WhatsApp, Signal, Telegram, Wiebo, Confide and Cloackman [sic] by hacking the ‘smart’ phones that they run on and collecting audio and message traffic before encryption is applied.” Essentially, the tactics that many journalists have touted as effective in protecting their privacy are rendered powerless by the CIA

Journalist and former member of the hacktivist collective Anonymous, Barrett Brown, was targeted by the CIA for writing about and linking to data that had been hacked.

Journalists across the board have great reason to be alarmed, chiefly due to the government’s tendency to mercilessly prosecute journalists who dig too deep. The CIA has been wiretapping journalists for well over 50 years, with some of the earliest documented and officially confirmed cases taking place in 1963. Despite the fact that much of this surveillance was illegal, the CIA – and the U.S. government – has only expanded its surveillance of both journalists and everyday citizens in recent decades, particularly with the dismantling of civil liberties in the post-9/11 world.

In addition, several prominent journalists have been silenced or imprisoned by the CIA or other parts of the U.S. power structure over the years. One very telling example is the case of Barrett Brown, a journalist and former member of the hacktivist collective Anonymous. Brown at one point faced a combined sentence of over 100 years just for writing about and linking to data that had been hacked. Brown was in no way involved in the hack, but his mere use of the hacked info as a source led him to be sentenced to over five years in prison.

While Brown’s politically-motivated prosecution is no doubt concerning, many other journalists have suffered much worse at the hands of the CIA and the U.S. government. One particularly notable case is that of late journalist Gary Webb, who famously exposed the CIA’s drug-running operation between Nicaraguan U.S.-funded rebels and crack dealers on the streets of Los Angeles.

Despite the fact that Webb’s claims have been vindicated in the years since, Webb was viciously attacked by the CIA and other news publications for his story, resulting in “one of the most venomous and factually inane assaults on a professional journalist’s competence in living memory.”

Webb committed suicide in 2004 as a result of the vicious attacks against him, though some have maintained that foul play may have played a role, considering that early reports indicated that he died of multiple gunshots to the face. Other well-known journalists like Michael Hastings and Udo Ulfkotte are also suspected to have died at the hands of the CIA after exposing the agency’s wrongdoings.

The Government’s War on Journalists and Operation Mockingbird

A man looks at his cell phone as he walks on the street in downtown Madrid, Thursday, Oct. 31, 2013. (AP/Francisco Seco)

However, it’s not just the CIA that journalists should be worried about, considering that the executive branch has upped its own war against journalists in recent years. This was particularly evident during the Obama years, which saw the harassment and wiretapping of numerous journalists.

In 2013, the Obama Justice Department secretly acquired two months’ worth of telephone records of Associated Press reporters and editors, which the news cooperative’s top executive called a “massive and unprecedented intrusion.” Soon after, it was disclosed that the Justice Department had also spied extensively on Fox News reporter James Rosen. A year later, the Obama administration began relentlessly harassing a New York Times reporter for refusing to reveal one of his sources.

Of course, not all journalists will be alarmed by these latest revelations, particularly those that work on behalf of U.S. intelligence or have already been proven to be illegally colluding with politicians or other elements of the U.S. power structure. Most recently, Wikileaks’ disclosure of the Podesta emails exposed the widespread collusion of top journalists with Hillary Clinton’s presidential campaign.

The collusion of journalists with the U.S. government is nothing new, as the CIA – as part of its program Operation Mockingbird – has been recruiting journalists from across the country since the 1950s in order to more effectively influence public opinion. The program encompasses all forms of media, including newspapers, periodicals, press services, news agencies, book publishers and radio and TV stations.

The machinery behind Operation Mockingbird was exposed by the U.S. Senate when the Church Committee, a Nixon-era Senate committee tasked with investigating U.S. intelligence abuses, found that:

With the true extent of the CIA’s surveillance capabilities and their history for silencing or attacking reporters confirmed, journalists now face a rather stark choice. With the government able to read any and all forms of electronic communication, journalists can either choose to serve Washington’s interests, as many journalists already have, or to continue to fight for the public’s right to know. Though the former may be more comforting to some in the short-term, history is unlikely to remember them as kindly as the latter.