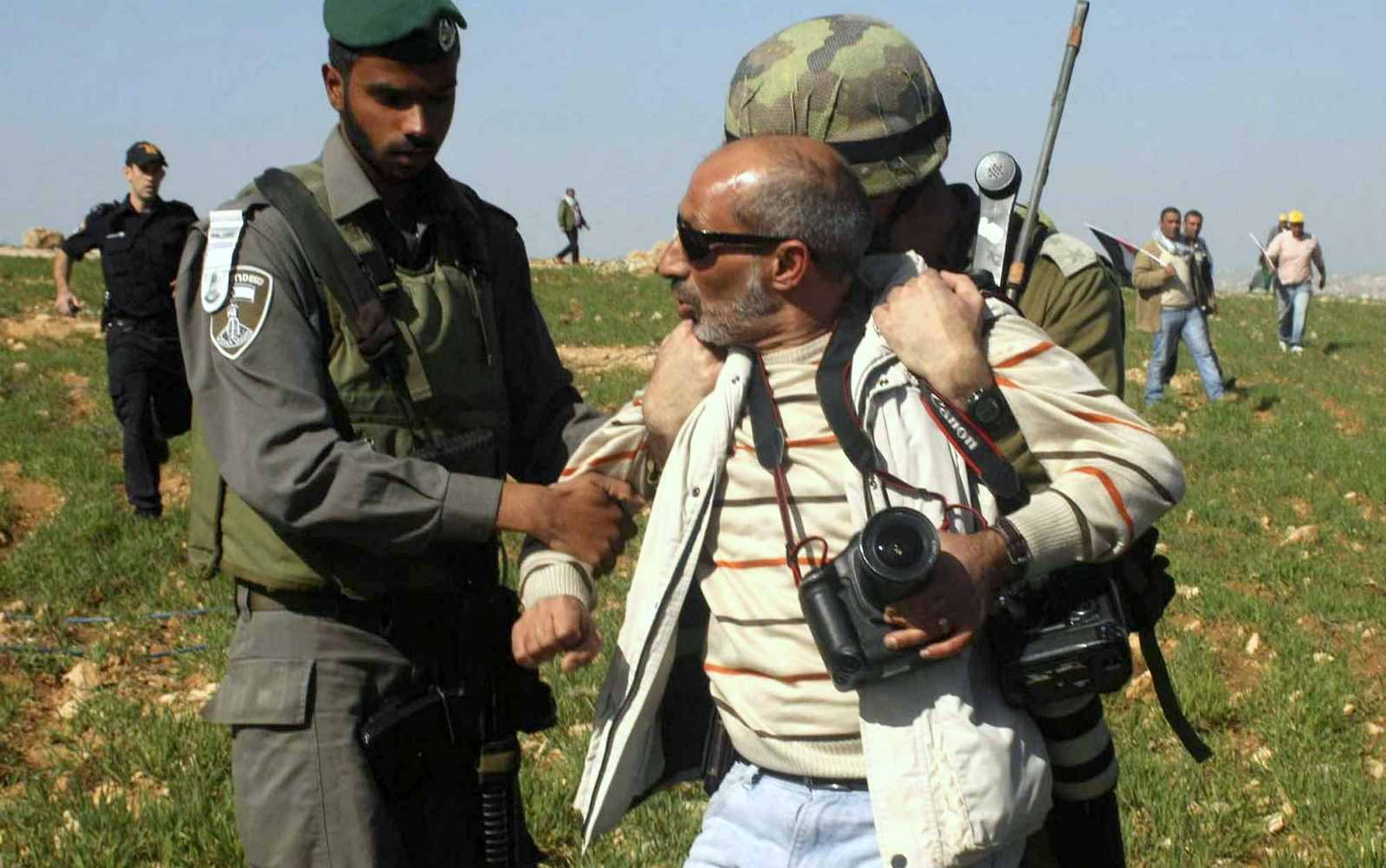 Watchdog: Press Freedom In Decline In ‘New Era Of Propaganda’

“All of the indicators show a deterioration. Numerous authorities are trying to regain control of their countries, fearing overly open public debate.”

Israeli security detain The Associated Press photographer Nasser Shiyoukhi during a Palestinian protest in Yatta in the West Bank on Saturday. Shiyoukhi was released without charge. (photo credit: AP Photo)

Paris – World press freedom deteriorated in 2015, especially in the Americas, advocacy group Reporters Without Borders said Wednesday as it released its annual rankings, warning of “a new era of propaganda”.

The World Press Freedom Index ranks 180 countries on indicators such as media independence, self-censorship, the rule of law, transparency and abuses.

This year’s report warned of a climate of fear that has seen world leaders “developing a form of paranoia about legitimate journalism.”

Christophe Deloire, secretary general of the Paris-based group told AFP there had been a decline in all parts of the world, with Latin America of particular concern.

“All of the indicators show a deterioration. Numerous authorities are trying to regain control of their countries, fearing overly open public debate,” he said.

“Today, it is increasingly easy for powers to appeal directly to the public through new technologies, and so there is a greater degree of violence against those who represent independent information,” he added.

“We are entering a new era of propaganda where new technologies allow the low-cost dissemination of their own communication, their information, as dictated. On the other side, journalists are the ones who get in the way.”

The situation was particularly grave in Latin America, the report said, highlighting “institutional violence” in Venezuela and Ecuador, organised crime in Honduras, impunity in Colombia, corruption in Brazil and media concentration in Argentina as the main obstacles to press freedom.

Among the lowest ranked countries were Syria, at 177th place out of 180, just below China (176th) but above North Korea (179th) and last placed Eritrea.

Japan slumped to 72nd due to what the watchdog identified as self-censorship towards Prime Minister Shinzo Abe, while Finland retained its top spot for the sixth consecutive year, followed by the Netherlands and Norway.

While Europe remained the region with the most press freedom, Reporters Without Borders warned that the misuse of counter-terrorist and counter-espionage measures and conflicts of interest had put it on “a downhill course”.

Poland fell a massive 29 places to 49th due to government seeking to restore Polish ownership of foreign owned Polish media.

And France dropped seven places to 45th because “most of the private-sector national media are now owned by a handful of businessmen with interests in areas of the economy unrelated to the media.”

In Europe threats to journalists were linked to rising nationalism which saw death threats in Sweden, which dropped three places to 8th , and attacks on journalists during anti-Muslim rallies in Germany (which dropped four spots to 16).

“And finally, it was in Paris that the attack on Charlie Hebdo took place on 7 January 2015, an attack masterminded from Yemen. So, Europe was also the victim of the world’s demons,” read the report.

In Africa a series of political crises and terrorism continued to erode press freedom.

South Sudan dropped 15 places to 140th due to intimidation of journalists during its civil war.

Efforts by presidents to stay in power in the Republic of Congo (115), Uganda (102) and Djibouti (172) “led to pre-election violence against journalists and harsh, government-orchestrated censorship of the media.”

“As a result of the president’s obstinacy in Burundi (156th), the leading independent media were destroyed, more than 100 journalists fled abroad and Burundi fell 11 places in the Index,” said the report.

The threat of jihadist groups in Mali — where one group threatened to behead foreign journalists — and Nigeria, led to a decline in press freedom in both countries.

In a glowing example of press freedom in Africa, Namibia was the continent’s best-ranked country at number 17.

“Its journalists are safe, its media landscape is diverse and no restrictions are placed on the Internet.”

Money, Power and Turf: Winning the Middle East Media War at Any Cost