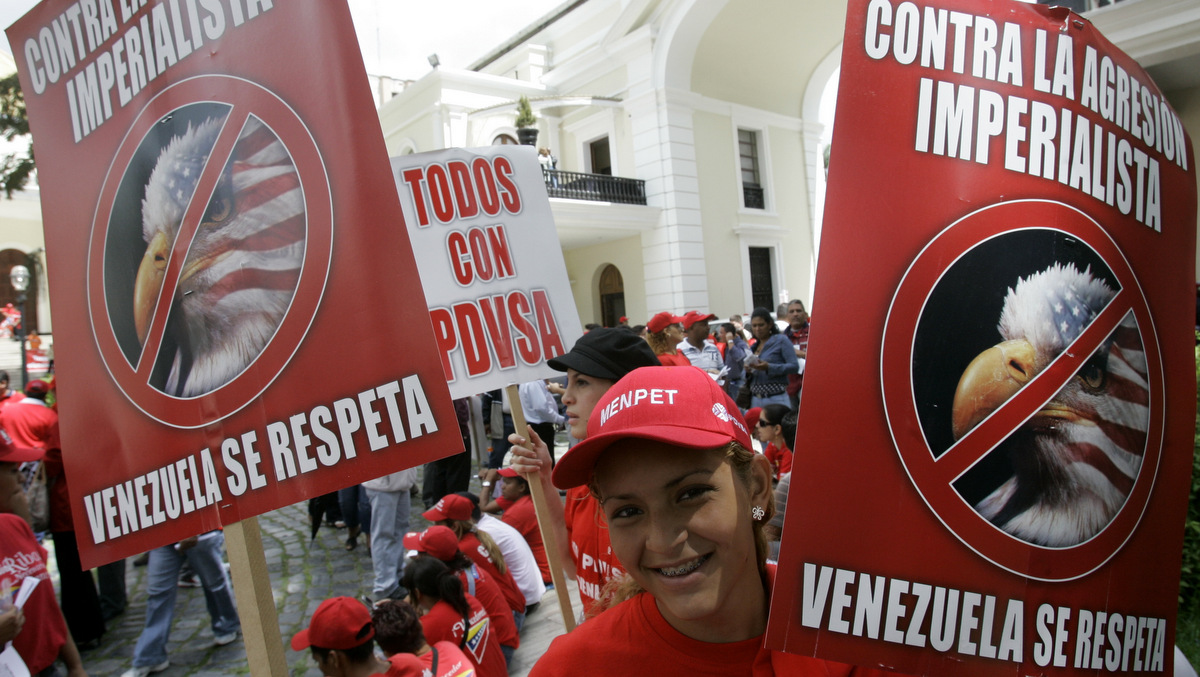 A Venezuelan protester holds a poster that reads in Spanish “Against Imperialist aggression, respect Venezuela” during a protest outside the National Assembly in Caracas Venezuela. (AP/Howard Yanes)

QUITO (Analysis)– If you’ve been following international news in recent years, you know that two countries, in particular, have served as punching bags for establishment pundits: Venezuela and Syria.

Sure, other countries on mainstream media’s target list — including Russia, China, Cuba, Iran and the Democratic People’s Republic of Korea (DPRK) — have also been persistently bombarded with hit pieces. But then these sovereign nations have always been under attack since declaring their independence from Washington’s imperialist grip.

What distinguishes recent corporate news attacks against Venezuela and Syria from media treatment of the countries mentioned above, however, is the role of their respective Western-backed opposition “movements.” Claiming to fight for “democracy” and “freedom,” protesters from both countries have participated in violent actions aimed at overthrowing their democratically-elected governments — Venezuela since 2014 and Syria since 2011.

This hasn’t been the case, at least in recent years, in Russia, China, Cuba, Iran and the DPRK.

In Venezuela, right-wing opposition groups have attempted to topple the socialist government of President Nicolas Maduro and the ruling United Socialist Party of Venezuela. They hope to follow the path of Brazil and Argentina, where social programs for the poor have been slashed and neoliberal austerity reigns.

In Syria, Wahhabi-aligned opposition groups have waged relentless war against President Bashar al-Assad and the incumbent Arab Socialist Ba’ath Party. They hope to follow the path of Saudi Arabia and the United Arab Emirates, where the rights of religious minorities have been stripped and Western-imposed sectarianism presides.

Though seemingly different in appearance, opposition groups in Venezuela and Syria are much alike in essence. Consider the following four examples of their similarity.

Not a day goes by when corporate news outlets don’t echo the indictments of Venezuelan and Syrian opposition members who claim their governments are “authoritarian regimes.”

Not only do these publications intentionally ignore the fact that the Venezuelan and Syrian governments were legitimately chosen to lead their nations in internationally recognized elections; they also unquestionably uphold the political positions of the opposition groups as the general sentiment of the entire country, failing to mention that a majority of citizens oppose their violence.

And in Syria, Assad resoundingly defeated presidential candidate Hassan al-Nouri during the 2014 presidential election, which several international observers also confirmed was transparent and legitimate. The Baathist leader received 88.7 percent of votes. Over 73 percent of the country’s population participated, along with millions of Syrian refugees around the world.

Firyal Sheikh El-Zour, 50, draws blood from her thumb with a syringe to use to mark a ballot, in Damascus, Syria, June 3, 2014. (AP/Dusan Vranic)

A poll conducted a year later by ORB International found that 47 percent of Syrians believed that Assad had a positive influence in Syria, compared to 35 percent for the Free Syrian Army (FSA) and 26 percent for the Syrian Opposition Coalition, according to analyst Stephen Gowans.

The FSA is a Syrian militant group that claims to be the “armed wing” of the country’s Western-backed opposition. It was formed in 2011 by renegade members of the Syrian Arab Army. The FSA has frequently been accused of supporting Daesh and other Wahhabi terrorist groups.

Yet Venezuelan and Syrian opposition claims that these elections and poll results were “rigged” are uncritically regurgitated by mainstream media, serving the interests of their imperialist overlords in the Global North who seek regime change.

Doing the dirty work of Washington and Wall Street

Contrary to popular belief, Venezuelan and Syrian opposition leaders are not impoverished, working-class activists who act on their own will. They are well-funded saboteurs armed and trained by bureaucrats in Washington and their wealthy handlers on Wall Street.

Since 2009, the U.S. Department of State has allocated at least $49 million to the South American country’s right-wing opposition, according to publicly-available budget documents released by the State Department.

Yet almost all of those funds have gone directly to opposition parties like Primero Justicia (Justice First) and Voluntad Popular (Popular Will), both of which helped organized violent protests that resulted in the deaths of at least 43 people in 2014 and 124 people this year.

Four years ago, former U.S. President Barack Obama secretly began funding Wahhabi-linked Syrian opposition militants, whom he described as “moderate rebels.” The allocation of funds, which Obama claimed would be used to “degrade and destroy” the Daesh terrorist group (ISIS), didn’t become public until 2014, when the U.S. Congress gave final approval to train and arm the FSA.

According to Foreign Policy magazine, ironically one of many mainstream media publications that blindly supported the so-called Syrian “revolution,” the United States has spent over $500 million on financing the opposition since Obama took office in 2009.

WikiLeaks, however, reported that Washington has financed Syrian opposition members and institutions since 2006 under former President George W. Bush.

Perhaps one of the most striking similarities between the Venezuelan and Syrian opposition, and an inconvenient truth for their apologists, is their use of terrorist acts. These acts, intended to strike fear in the minds of those who oppose their interventionist agendas, are rarely reported in corporate news outlets.

Not only has the Venezuelan opposition utilized “guarimbas,” or street blockades created with ignited trash, to wreak havoc in cities across the country; they have also torched public buses, incinerated tons of government-subsidized food intended for hungry citizens, launched grenades over government buildings, attacked hospitals and nurseries, and, perhaps most disturbingly, immolated supporters of the socialist government.

A protester wearing a gas mask and carrying a golf club walks to join fellow protesters, past a burning public transportation bus in Caracas, Venezuela, May 13, 2017. (AP/Fernando Llano)

The last example is epitomized by the case of Orlando Figueroa, a 21-year-old Afro-Venezuelan who was drenched in gasoline and lit on fire on May 20 by a white Venezuelan opposition protester for “being Chavista.” Enzo Franchini Oliveros, identified as Figueroa’s murderer, was assisted by other demonstrators who have not yet been detained.

Figueroa, who worked as a parking attendant and came from humble working-class roots, died several days later. At least 23 people have been burned alive by opposition protesters, according to Red58.org, a Venezuelan watchdog media group that exposes right-wing violence.

Similar terrorist tactics have also been used in Syria by the Wahhabi-linked militants. Like their Venezuelan counterparts, Syrian opposition protesters have torched public infrastructure and killed civilians accused of “being Assadists.” Their violent military campaigns against pro-government, anti-imperialist citizens have also claimed hundreds, if not thousands, of lives.

Two terrorist acts committed by the Syrian opposition, however, stand out as the most gruesome.

The first involved Abu Sakkar, a former FSA fighter who cut out the heart of a fallen Syrian Arab Army soldier in 2013 and ate it in front of other “moderate rebels.” The incident was recorded on video. The second involved members of the U.S.-funded terrorist group Nour al-Din al-Zenki Movement, which beheaded a young child near Aleppo in 2016. This act was also recorded on video.

These incidents, to the discomfort of pro-imperialist liberals who defend these criminals as “freedom fighters” and “revolutionaries,” demonstrate that both the Venezuelan and Syrian opposition commit acts of terrorism that are largely overlooked.

For years, Washington and its propagandists in mainstream media have predicted that Maduro and Assad will eventually be forced out of power through “democratic uprisings” in both countries. This delusional fantasy has yet to come true.

Instead, confident forecasts that both leaders “will step down” have mutated into hopeful suggestions that “they should step down.” U.S. media pundits and policymakers alike remain baffled at the fact that Obama left office before Maduro and Assad did.

What’s the reason for this? It’s not because they have “consolidated their grip on power,” as both liberals and conservatives characterize it. Rather, it’s because millions of Venezuelans and Syrians have recognized that U.S. intervention does not offer them a future. All one needs to do is take a look at Iraq and Afghanistan, which the United States has left in ruins by supporting “pro-democracy efforts.”

Citizens of both Venezuela and Syria have affirmed that they — not bureaucrats in Washington or wealthy elites on Wall Street — will be the molders of their own destiny.

In Venezuela, for example, over eight million people participated in the country’s July 30 National Constituent Assembly vote, electing 545 candidates to help rewrite the Constitution. The democratic process, which was undertaken and implemented in accordance with the country’s laws, is intended to bring together broad sectors of society in order to secure peace and stability.

Since the National Constituent Assembly vote took place, opposition leaders have remained divided on whether to participate in upcoming regional elections. Opposition protests have also lost popularity among swaths of citizens who are tired of violence and yearn for peace and stability.

And in Syria, Assad’s government has successfully liberated dozens of Daesh and rebel-held areas that had been living under the gun for years. The Arab Socialist Ba’ath Party has also been able to restore electricity, running water and other important infrastructure in areas that were previously destroyed by the Syrian opposition and Saudi-backed terrorists.

With help from Russia and Iran, Syria has also been able to create four safe zones across the country, which serve as an important first step toward re-establishing peace and unity in the Middle Eastern nation.

What remains clear is this: the Venezuelan and Syrian oppositions, which were born together as twin faces of modern imperialism, are also destined to wither away alongside one another.