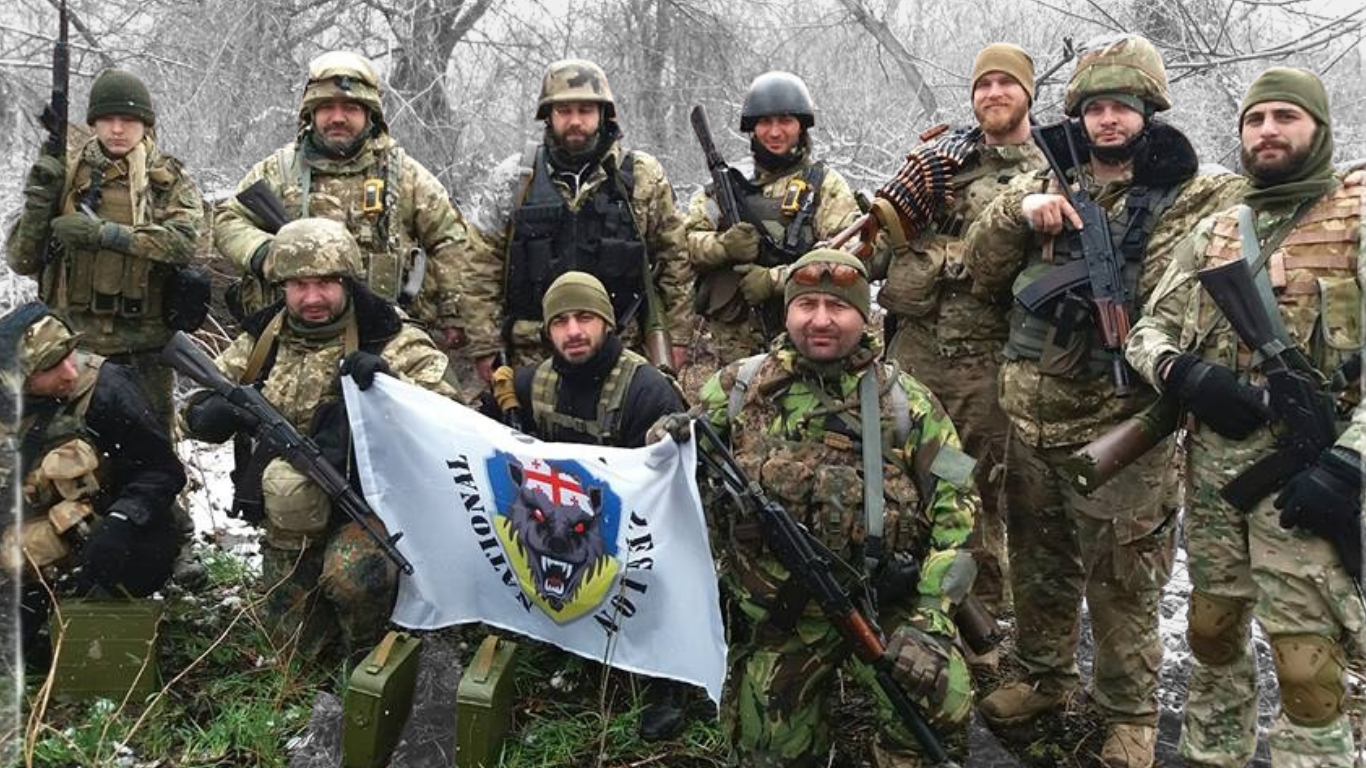 A warlord in Washington

KIEV, UKRAINE (THE GRAYZONE) — Having taken up arms against Russia for a fifth time, Georgian Legion commander Mamuka Mamulashvili has bragged on video about his unit carrying out field executions of captured Russian soldiers in Ukraine.

While Western media pundits howled about images of dead bodies in the city of Bucha, echoing Ukrainian President Volodymyr Zelenksy’s accusation that Russia is guilty of “genocide,” they have largely overlooked the apparent admission of atrocities by an avowed ally of the United States who was welcomed on Capitol Hill by senior lawmakers overseeing congressional foreign policy committees.

Having fought in four wars against Russia, and despite allegations that he played a leading role in the massacre of 49 protesters in Kiev’s Maidan Square in 2014, Mamulashvili has taken multiple trips to the United States, where he received a warm welcome from members of Congress, the New York Police Department, and Ukrainian diaspora community.

In an interview this April, Mamulashvili, was asked about a video showing Russian fighters who had been extrajudicially executed in Dmitrovka, a town just five miles from Bucha. Mamulashvili was candid about his unit’s take-no-prisoners tactics, though he has denied involvement in the specific crimes depicted.

“We will not take Russian soldiers, as well as Kadyrovites [Chechnyan fighters]; in any case, we will not take prisoners, not a single person will be captured,” Mamulashvili said, implying that his fighters execute POWs.

Mamuka Mamulashvili, commander of the "Georgian National Legion" in Ukraine: "Yes, we tie their hands and feet sometimes. I speak for the Georgian Legion, we will never take Russian soldiers prisoner. Not a single one of them will be taken prisoner." pic.twitter.com/4GM9nHsOMo

“Yes, we tie their hands and feet sometimes. I speak for the Georgian Legion, we will never take Russian soldiers prisoner. Not a single one of them will be taken prisoner,” Mamulashvili emphasized

Executions of enemy combatants are considered war crimes under the Geneva Convention.

War crimes on the front lines

Western governments continue to block a Russian request for a United Nations investigation into alleged massacres in Bucha, where scores of corpses were photographed following the Russian withdrawal from the city, some with hands bound and shot execution style – as Mamulashvili described doing to prisoners.

While the events in Bucha have become a source of outrage and heated contention, a clear case of war crimes by Ukrainian forces which took place just five miles down the road on March 30 as Russian troops withdrew has received a more muted response despite coverage by the New York Times.

The macabre footage shows Russian paratroopers dead or bleeding out in the road, some with their hands clearly bound — reportedly the handiwork of the Georgian Legion.

Celebrating the ambush’s success, the videographer calls the attention of his fellow soldiers: “Georgians! Belgravia, boys!” Belgravia refers to a nearby housing complex from which some of the non-Georgian fighters presumably hail.

“Look, he is still alive,” one of the fighters says as a Russian writhes in a pool of blood. He was then shot three times at close range.

Oz Katerji, a neoconservative British-Lebanese operative who has generated attention by sending threatening Whatsapp messages to journalists opposed to the US-backed dirty war in Syria, fantasizing about police torturing Grayzone editor Max Blumenthal, hysterically heckling former UK Labour leader Jeremy Corbyn at an antiwar meeting, and embedding with CIA-backed armed gangs in Syria, wound up at the site of the Russian convoy two days after it was destroyed.

Filming himself against the backdrop of numerous burned out Russian tanks, Katerji tweeted that soldiers told him “they had removed eight Russian corpses from the battlefield yesterday.”

An equally sanitized depiction of the scene was published by the Ministry of Defense of Ukraine on Twitter, which compiled shots of the destruction and an interview with a soldier over an intermittent electronic soundtrack.

In the original war crimes video, one of the men who gloated at the scene of the killings has been identified as Khizanishvili Teymuraz of the Georgian Legion. Previously, Teymuraz served as a body guard to former Georgian president and Mamulashvili ally Mikheil Saakashvili.

A pet project of Washington neoconservatives, Saakashvili met disgrace after leading a disastrous war of choice against Russia over South Ossetia in 2008. He eventually accepted an offer from Ukraine to serve as governor in Odessa in 2015.

“It is necessary to create chaos on the Maidan”

The most deadly incident during the 2013-14 riots and protests on Kiev’s Maidan Square that eventually led to the ouster of Ukrainian President Viktor Yanukovych was the massacre of 49 demonstrators on February 20, 2014. The incident galvanized international outrage against Yanukovych and weakened his government’s negotiating position. Yet it remains shrouded in intrigue.

During the color revolution on the Maidan, Mamulashvili rallied his old war buddies to take up Ukraine’s cause. Near the central square, his group was reportedly “told to ensure order so that there were no drunks, to maintain discipline and identify rabble-rousers sent in by the authorities.”

Mamulashvili’s former comrades told Russian media that he eventually told them “it is necessary to create chaos on the Maidan, using weapons against any targets, protesters and police — no difference.”

President Vlodymyr Zelensky has described the killings on the Maidan as “the most complicated case in our country,” noting that the crime scene was tampered with and documents have mysteriously disappeared.

Today, some researchers point to Mamulashvili and his Georgian Legionnaires as key suspects behind the mysterious killings. Ivan Katchanovski, a professor of political science at the University of Ottawa, is among those who believe Mamulashvili’s allies were likely among those who fired on protesters from buildings over Maidan Square, generating bloodshed that was ultimately blamed on Ukraine’s then-government.

“Testimonies by several Georgian self-admitted members of Maidan sniper groups for the Maidan massacre trial and investigation and their interviews in American, Italian and Israeli TV documentaries and Macedonian and Russian media are generally consistent with findings of my academic studies of the Maidan massacre,” Katchanovski commented to The Grayzone.

While Katchanovski said his academic research did not focus on the involvement of specific individuals in the massacre, he stated that most of the Georgians who testified in the trial revealed their names, passport numbers and border stamps, copies of plane tickets, videos and photos in Ukraine or Georgian military, and other evidence to affirm their credibility. He added that some of their identities were verified by the Ukrainian border guard service and the Armenian and Belarusian authorities for the Maidan massacre trial in Ukraine.

“The Maidan massacre trial in November 2021 admitted and showed as evidence a testimony of one of these Georgians who confessed of being a member of a group of Maidan snipers,” Katchanovski stated.

The US members of Congress that hosted Mamulashvili were either unaware of these allegations or believed the Georgian warlord was simply innocent.

A warlord goes to Washington

As this reporter recently documented for The Grayzone, photos posted by Mamulashvili on his Facebook page show the Georgian hard-man inside the US Capitol rubbing elbows with some of the top figures on the House Foreign Relations Committee.

Contacted by phone by this reporter, the offices of Senators Feinstein and Gilibrand have declined to comment on their hosting of the Georgian warlord.

Mamulashvili’s multiple trips to the United States have offered him the opportunity to attend events at the Ukrainian embassy in Washington, give talks at Saint George Academy, a Ukrainian Catholic School in the Lower East Side of Manhattan, and hold forth in an interview with the Washington office of US government’s Voice of America in 2015. He has even posed for photo ops with officers of the New York City Police Department.

Additional photos show Mamulashvili holding the flag of the Georgian Legion with Nadiya Shaporynska, the founder and president of US Ukrainian Activists, a DC-based non-profit that has lobbied members Congress to take measures against Russia, held daily rallies outside of the White House, and fundraised tens of thousands of dollars to procure supplies for the Ukrainian military and refugees.

In between these trips, Mamulashvili constructed three training bases and recruited hundreds of fighters. Some photos he posted to Facebook show the warlord’s subordinates training children (below) for battle against Russia. The practice of cultivating children for warfare is shared by Ukraine’s more notorious Azov Battalion.

US volunteer with the Georgian Legion details executions, flees after threats

In March, this reporter interviewed Henry Hoeft, a US army veteran who accepted Zelensky’s appeal for foreign fighters and volunteered for the Georgian Legion.

Hoeft told The Grayzone that members of the legion threatened to kill him when he refused to go to the front lines without a weapon. Heft also recalled how Georgian fighters put bags over the heads of two men who blew through a checkpoint and executed them on the spot, accusing them of being spies for Russia.

While Western reporters have presented Mamulashvili as a brave and tactically deft battlefield commander since he entered the fight against Russia in Ukraine, his unit has also received mention in articles over the years on the unsavory figures it has welcomed into its ranks: neo-Nazis, bank robbers and fugitives like Craig Lang, who is wanted in the United States on suspicion of murdering a married couple in Florida.

In the east of Ukraine, where Lang spoke to the media on behalf of the Georgian Legion (then sometimes called the “Foreign Legion”) from the front lines, the Department of Justice and FBI have investigated Lang and seven other Americans for war crimes. The group allegedly took “non-combatants” as prisoners and tortured them, sometimes to death before burial in an unmarked grave.

As the war in Ukraine intensifies and the US deepens its commitment to escalating it, top foreign policy figures in Washington are wagging a finger at Russia with one hand and literally shaking the hand of Mamulashvili, an avowed war criminal, with the other.