The US Spends $4M To Train One Syrian Rebel: What Else Could That Buy?

Syrian rebels attend a training session in Maaret Ikhwan near Idlib, Syria. Fewer than 100 Syrian rebels are currently being trained by the U.S. military to fight the Islamic State group, a tiny total for a sputtering program with a stated goal of producing 5,400 fighters a year. The training effort is moving so slowly that critics question whether it can produce enough capable fighters quickly enough to make a difference. Military officials said this past week that they still hope for 3,000 by year’s end. Privately, they acknowledge the trend is moving in the wrong direction.

WASHINGTON — A U.S. government official recently revealed the shocking ineffectiveness of millions spent on U.S. plans to train Syrian rebels, while in the United States inequality worsens, national infrastructure crumbles, major cities like Detroit suffer from economic collapse, and student debt and inequality continue to careen out of control.

Last year, the U.S. budgeted $500 million to train Syrian rebels opposed to the rise of so-called Islamic State of Iraq and Syria (ISIS). Officials hoped the money would train thousands of new fighters in an ongoing civil war that’s already devastated the civilian population. Austin Wright, writing in a report published by Politico last weekend, quoted an anonymous congressional aide on the progress of the program: “About half of the $500 million has been obligated thus far, mostly on equipment required to train the Syrian fighters.” According to the same aid, approximately 60 fighters have been trained to date — a figure that falls far short of the program’s goals.

“How much has the United States spent to train that whopping force of 60 Syrian rebels to take on the Islamic State?” asked Wright. “Well, according to basic math, about $4 million for each of them.”

The millions in aid to Syrian rebels are just a small portion of the billions the U.S. government spends on military aid to foreign governments every year while making deeper cuts to social safety nets back home.

For example, the U.S. expanded its aid to Saudi Arabia in March, and those funds are being used to support human rights abuses both inside the country and in a months-long bombing campaign that’s caused a humanitarian crisis in Yemen. And the U.S. will spend about $3.1 billion on Israel this year to support the country’s illegal occupation of Palestine and war crimes like deliberately targeting civilians.

During his two terms, President Barack Obama oversaw an expansion of the American war machine while inequality worsened nationwide. Here are some key domestic issues where these billions might be better spent:

Infrastructure: The U.S. Army Corps of Engineers rated America’s infrastructure at a D+ in 2007, the last time they made a nationwide survey. Conditions for crucial elements of the American landscape like bridges, highways and dams have only worsened since then. According to a February article from Vice, it would take $3.6 trillion to upgrade America’s infrastructure, but the millions spent on Syrian rebels could go to key projects like the Baltimore sewer system and Seattle’s Alaskan Way Viaduct. Divers search the Mississippi River on Aug. 3, 2007, during recovery efforts after the Interstate 35W bridge collapsed in Minneapolis.

Education & Student Loan Debt: America’s public education system never recovered from the economic crash. According to the Center on Budget and Policy Priorities, most states spend less on schools than they did before the recession. “Restoring school funding should be an urgent priority. The steep state-level K-12 spending cuts of the last several years have serious consequences for the nation,” write the report’s authors, Michael Leachman and Chris Mai. Meanwhile, student debt is out of control, reaching a “bonkers” $1.2 trillion in April, according to USA Today. 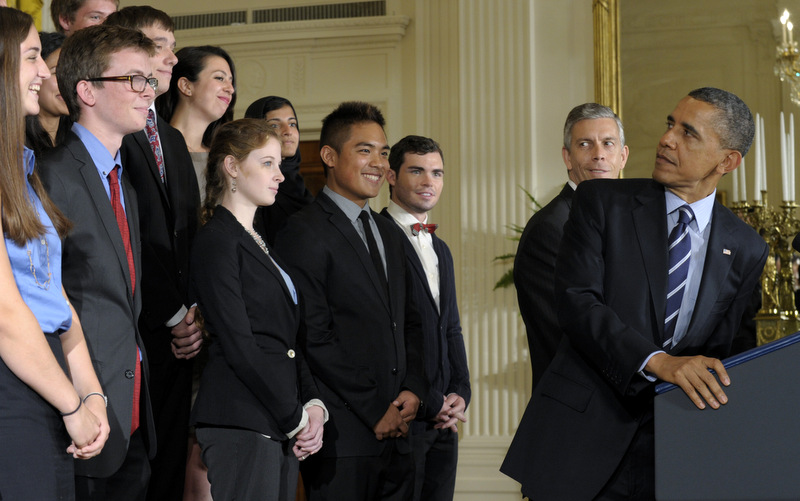 President Barack Obama, right, with Education Secretary Arne Duncan at his side, second from right, looks back at students as he calls on Congress to stop interest rates on student loans from doubling. (AP/Susan Walsh)

American Cities: As manufacturing continues to move overseas and the U.S. working class suffers through a “jobless recovery,” American cities like Detroit are struggling with massive budget shortfalls. Good jobs remain scarce, with some workers walking miles every day to get to work as the public transit network collapses from years of cuts. One possible better use for the millions spent on Syrian rebels could be keeping fresh water flowing for thousands of residents of Baltimore and Detroit who face shut-offs for unpaid bills despite millions in unpaid water bills from corporate debtors. A decaying house in Detroit, Mich. A full third of the city is now vacant. (Photo/Angie Linder via Flickr)