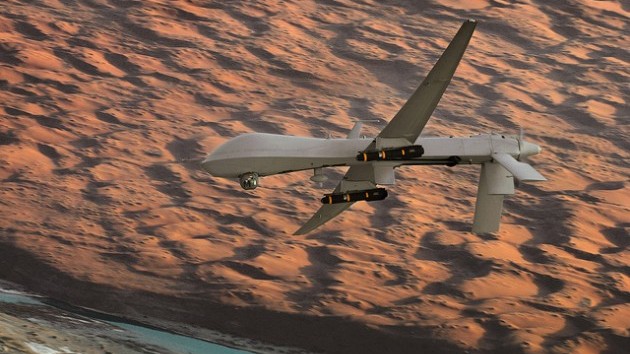 A federal judge ruled in favor of secretive U.S. drone strikes Wednesday, stating that attacks killing civilians, including U.S. citizens, can remain shrouded in mystery. The 75-page ruling gave a pass to the U.S. Justice Department, declaring that the U.S. government is under no obligation to make public the details of extensive drone operations in Afghanistan, Pakistan, Somalia and Yemen. The ruling expands U.S. impunity in ongoing incursions that have killed thousands of civilians since 2004.

In the ruling, Judge Colleen McMahon struck down Freedom of Information Act Requests filed on behalf of the American Civil Liberties Union (ACLU) and the family members of three Americans assassinated by drone strikes in 2011.

(MintPress) — Thirteen Pakistani civilians were killed in three separate U.S. drone strikes over the weekend in the latest onslaught of drone violence targeting enemy combatants. The strikes occurred during the Eid al-Fitr holiday celebrating the end of fasting for Muslims during the month of Ramadan.

NATO forces will continue to fight on the ground in Afghanistan at least until 2014. However, drone strikes, largely in Pakistan and Yemen, have expanded as an integral part of the Obama administration’s anti-terror policies and could continue after the proposed NATO pullout.

Others contend that while the strikes have taken out high level targets, the increasing number of civilian casualties ultimately turns once-allied populations into enemies of the U.S.

“Anti-Americanism is far less prevalent in Yemen than in Pakistan. But rather than winning the hearts and minds of Yemeni civilians, America is alienating them by killing their relatives and friends. Indeed, the drone program is leading to the Talibanization of vast tribal areas and the radicalization of people who could otherwise be America’s allies in the fight against terrorism in Yemen.”

Rather than building local alliances in the fight to eradicate terrorism, many locals have become incensed with the increasing number of civilian casualties and violations of national sovereignty.

The ever expanding “kill list” edited personally by President Obama gives directives to eliminate enemy combatants. The list has come under scrutiny at times for targeting American citizens and children. Extra-judicial killings of U.S. citizens denied their due process of law has been challenged by citizens seeking justice for their slain family members.

Thus far, the process has seldom resulted in the capture of enemy combatants, almost always ending in the death of the targeted individuals.

While many of these targets would receive the death penalty if tried in U.S. courts, legal experts contend that the tactical assassination of these targets represents a violation of both international and U.S. law.

The first legal challenge began last month, when the families of three Americans killed by drone strikes in Yemen filed a suit against the Secretary of Defense and the director of the CIA.

The American Civil Liberties Union (ACLU) is assisting the families with their ongoing legal action, claiming that the U.S. murdered three of its own citizens without trial, denying them due process of law.

Two of the Americans killed, Anwar al-Aulaqi and Samir Khan, were both involved in jihadi networks, with the former being called “bin Laden of the Internet” for his radical sermons.

In a separate attack, Aulaqi’s 16-year-old son was killed in a drone strike targeting an open air restaurant in Yemen. The deceased’s grandfather, Nasser al-Aulaqi, is one of the plaintiffs in the legal action. Nasser al-Aulaqi commented on his grandson’s death in an interview last month saying:

“I never expected, you know, that a small boy who was born in America, who was a citizen of America, would be killed by the United States government, his own government.”

Although supporters of unmanned aerial vehicles claim that the missile attacks are generally precise, non-government statistics indicate that hundreds of civilians and noncombatants have been killed in the drone strikes.

The Bureau of Investigative Journalism reports that between 2002-2012, there may be as many as 832 civilians killed in Pakistan. The center also reports up to 146 civilians killed in Yemen and 57 in Somalia. These statistics often go unreported in the Western press.

Codepink a grassroots women’s peace initiative, has confronted this issue with direct public demonstrations and petitions. Next month, a small delegation of Americans sponsored by the group will travel to Pakistan’s northern tribal areas to protest the U.S. drone strikes in the region.

This is the first delegation of American activists traveling to Waziristan to protest U.S. drone strikes.

In defense of drones

Supporters of the drone campaigns in Pakistan and Yemen point to the growing number of combatants killed, including high level al-Qaida targets Abu Yahya al-Libi in 2012 and Anwar al-Aulaqi in 2011, among others, as reason to continue the strikes.

Unlike conventional pilots, drone operators can work from secure facilities thousands of miles away from the battlefields in the U.S. This is one of the main reasons many within the U.S. military establishment support the use of unmanned drones as a way to save American lives.

Earlier this month, Bradley Strawser, assistant professor of philosophy at the Monterey Naval Postgraduate School, offered a contentious defense of drones. Strawser opposes what he calls “hawkish neoconservative foreign policy,” calling the war in Iraq “unjust,” but he believes the U.S. is justified in using drones to attack enemy combatants.

The 33-year-old professor also maintains that the U.S. is morally obligated to use drones because they help save American lives. Strawser opines, saying:

“It’s all upside. There’s no downside. Both ethically and normatively, there’s a tremendous value. You’re not risking the pilot. The pilot is safe. And all the empirical evidence shows that drones tend to be more accurate. We need to shift the burden of the argument to the other side. Why not do this? The positive reasons are overwhelming at this point. This is the future of all air warfare. At least for the U.S.”