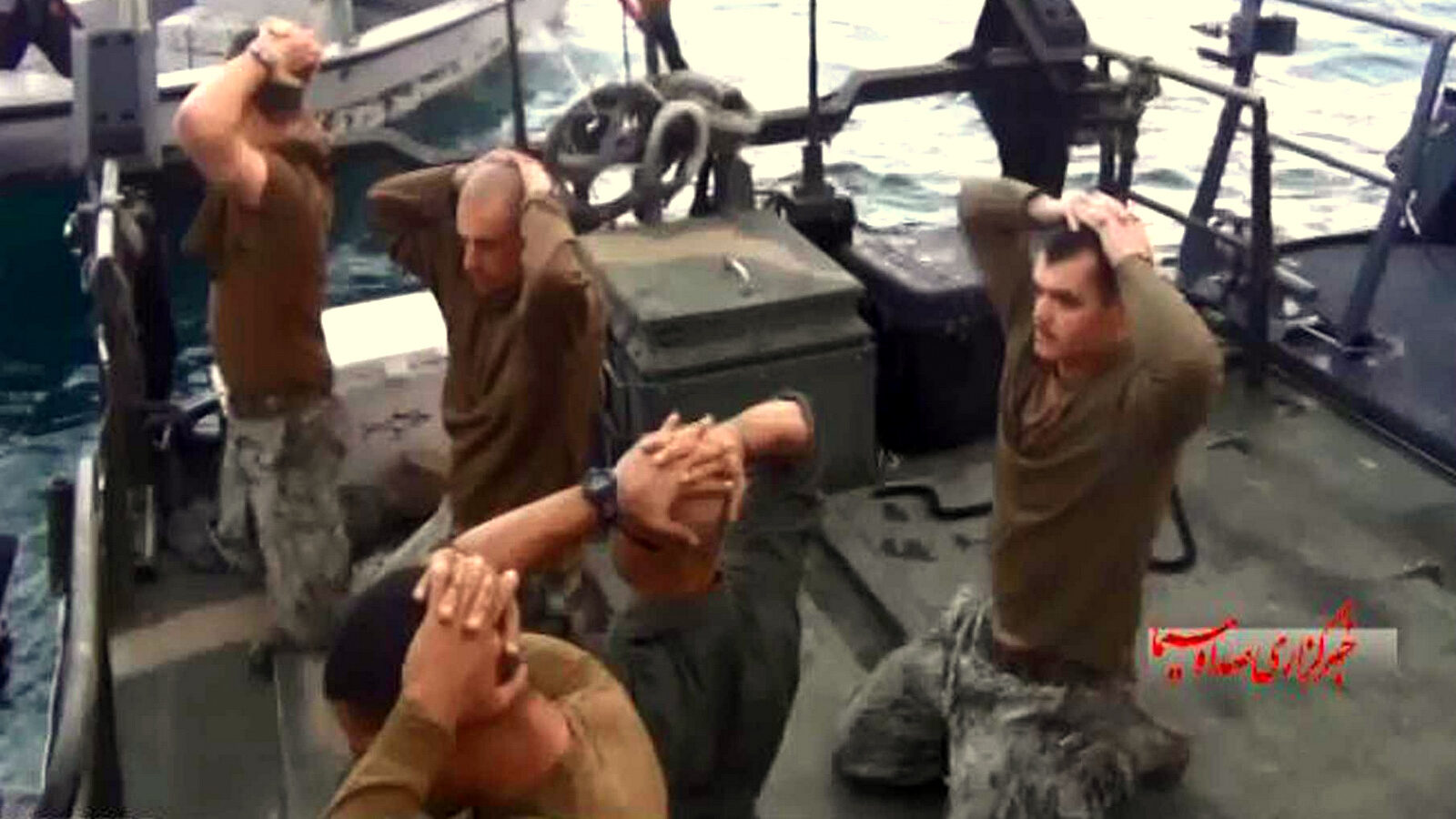 This frame grab from Jan. 12, 2016, video by the Iranian state-run IRIB News Agency shows the detention of U.S. Navy sailors by the Iranian Revolutionary Guard in the Persian Gulf. (IRIB)

Tehran, Iran – The airwaves in the United States were filled with images of sailors on their knees while a US Navy vessel was searched. Unjustified outrage swept the nation. The US Secretary of Defense blamed the incident on a simple navigation error, however a chain of events leading back to 2009 demonstrates the facts are a little more complicated than first appear. The chain of events leads defense analysts to one unmistakable conclusion: Iran has the ability to disrupt US GPS systems. For western military analysts, the thought is terrifying. The West uses GPS for much more than replacing a compass and a map.

In 2009, Lockheed Martin’s RQ-170 Sentinel showed up on a runway in Kandahar, Afghanistan. The aircraft entered service two years earlier, but the public was unaware. The bat wing styled drone is reminiscent of the Stealth Bomber. The similarities extend beyond the cosmetic, and the RQ-170 is the premier spy drone in the US fleet. This was the drone used to map out Bin Laden’s compound. It was tasked with keeping an eye on Iran’s nuclear program. That’s when things got interesting.

On December 4, 2011 a RQ-170 Sentinel crashed into the Iranian countryside. Iran claimed its electronic warfare unit brought the plane down. The US Department of Defense stated the aircraft was flying over western Afghanistan and crashed near or in Iran. The aircraft was 140 miles inside Iran’s borders. The west laughed at the idea of Iran’s military obtaining the capability to down one the most sophisticated drones in the world. One military official remarked it was like:

“dropping a Ferrari into an ox-cart technology culture.”

They probably shouldn’t have been so quick to laugh. It appears the Iranians didn’t just down the aircraft, they took control of it mid-flight. Dailytech.com explained:

“Using its knowledge of the frequency, the engineer claims, Iran intiated its ‘electronic ambush’ by jamming the bird’s communications frequencies, forcing it into auto-pilot.  States the source, ‘By putting noise [jamming] on the communications, you force the bird into autopilot. This is where the bird loses its brain.’

“The team then use a technique known as ‘spoofing’ — sending a false signal for the purposes of obfuscation or other gain.  In this case the signal in questions was the GPS feed, which the drone commonly acquires from several satellites.  By spoofing the GPS feed, Iranian officials were able to convince it that it was in Afghanistan, close to its home base.  At that point the drone’s autopilot functionality kicked in and triggered the landing.  But rather than landing at a U.S. military base, the drone victim instead found itself captured at an Iranian military landing zone.

“Spoofing the GPS is a clever method, as it allows hackers to ‘land on its own where we wanted it to, without having to crack the [encrypted] remote-control signals and communications.’

“While the technique did not require sophistication from a cryptography perspective, it was not entirely trivial, either, as it required precise calculations to be made to give the drone the proper forged distance and find and fine an appropriate altitude landing strip to make sure the drone landed as it did in Afghanistan.  The Iranian engineers knew the details of the landing site, because the drone had been confirmed in grainy photos to be landing at a base in Khandar, Afghanistan.

“Despite the careful calculations, the drone still sustained a dent in its wing and underbody (though it did not have the usual signs of a high-speed collision).  During its press conferences, the Iranian military covered this damage with anti-American banners.

“The engineer explained this damage commenting, ‘If you look at the location where we made it land and the bird’s home base, they both have [almost] the same altitude.  There was a problem [of a few meters] with the exact altitude so the bird’s underbelly was damaged in landing; that’s why it was covered in the broadcast footage.’The approach echoes an October security conference presentation [PDF] in Chicago, in which ETH Zurich researchers laid out how to use interference and GPS spoofing to more gently down a drone.”

The Aviationist agreed and suggested the US “reconsider their drones’ equipment, countermeasures and combat operation procedures as well as Iran’s electronic and cyberwarfare capabilities.” It should be noted the “ox-cart technology culture” has since reverse engineered the drone.

The gross underestimation of the Iranian military led to the recent incident in the Persian Gulf. The story being repeated in the western press is one of ten sailors getting lost and ending up in Iranian territorial waters (if the outlet mentions that part). According to Secretary of Defense Carter, “All the contributing factors to that we don’t know yet, and we’re still talking to those folks, and we’ll find out more … but they were clearly out of the position that they intended to be in.”

Two boats lost their GPS abilities at the same time, and the Secretary of Defense isn’t sure what happened? A few US outlets, such as the L.A. Times, reported on the other malfunctions during the incident. Both boats lost radio communication and all other communication during the incident. A single vehicle losing its GPS abilities can happen. It’s rare, but it can happen. Two vehicles losing the systems at the same time borders on implausible, but there is still a possibility of it occurring through Murphy’s Law. The loss of all communication equipment and GPS systems on two boats at the same time means one thing: electronic warfare.

The unwillingness to admit the US military has spent billions on a system that has apparently been defeated by Iran is the most likely culprit behind the western media’s attempt to focus on the “ill treatment” of US sailors. Even the L.A. Times, which was willing to report on the communications failures, placed the following quote in a bold offset in the same article:

“The way those sailors were treated was entirely inappropriate. … The U.S. Navy would never demand Iranian sailors hold their hands on their heads and coerce a confession.– James Stavridis, retired U.S. admiral”

The U.S. Navy’s installation at Guantanamo Bay has been the scene of the worst treatment of detainees by the US government in decades. The sailors captured by Iran were not waterboarded, deprived of sleep or food, sexually abused, or otherwise tortured. The United States does not have the moral authority to object to how another nation treats detainees.

The burning question now relates to whether or not Iran’s actions constitute an attack on the U.S. It’s not a simple question. Electronic warfare and cyber warfare have become common place. It is also worth noting the two US vessels were within just a few miles of Farsi Island. Farsi Island is the home of the Revolutionary Guards’ Navy (RGN). The RGN is Iran’s maritime unconventional warfare force. For comparison, imagine a scenario in which a nation that has attacked a US civilian airliner and whose political leaders have constantly threatened war sent two boats to  pass extraordinarily close to the home base of a U.S. Seal Team. The reader can decide if Iran’s actions were appropriate.

The most important takeaway from this incident is to remember the high-tech military of the United States has an exposed vulnerability. It’s a vulnerability that was exploited by Iran. Iran is not a nation many in military circles would see as technologically advanced. The drone warfare system has a fatal flaw. If Iran can exploit it, China and Russia certainly can. Even North Korea has been able to successfully disrupt the GPS system. Beyond simple navigation, the U.S. employs the GPS system to guide missiles. If the Iranians can jam and spoof their way into controlling a drone, it isn’t a huge leap to believe have the ability, or will soon have the ability, to do the same thing with guided missiles.

It should be noted that GPS jammers are available on the civilian market and have been detected in use inside the United Kingdom. This revelation may also be the reasoning behind the U.S. decision to require drone operators to register their aircraft.