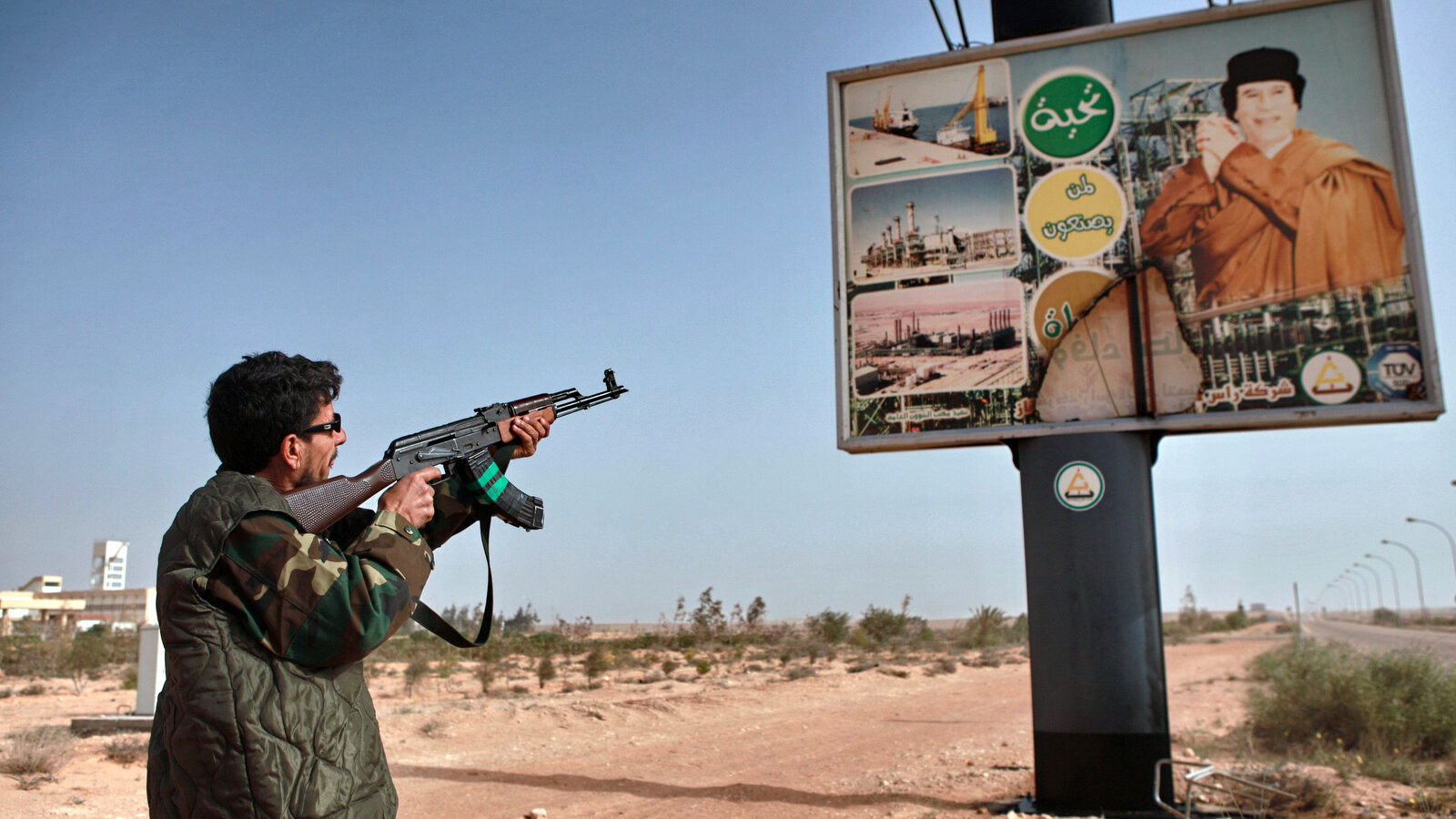 An armed Libyan rebel shoots an AK-47 at a poster of Muhammar Gaddafi in the captured rebel town of Ras-Lanuf in the east of the country (Photo: Andrey Stenin/Sputnik)

On November 20, 2015, two jihadi militants attacked the Radisson Blu hotel in Bamako, Mali, seizing about 100 hostages and “leaving bodies strewed across the building.” When it was over, 22 people (including the attackers) had been killed. As the New York Times reported:

Mali has been crippled by instability since January, 2012, when rebels and Al Qaeda-linked militants — armed with the remnants of late Libyan leader Col. Muammar el-Qaddafi’s arsenal — began advancing through the country’s vast desert in the north and capturing towns.

Not much has been made in American and Western media of this attack. Most of the dead were Malians, Russians, and Chinese—and, hey, it was in Africa; Shit happens. Especially there. How many people reading this even remember that it happened? Follow-up analysis? It was Africa. That kind of coverage. (I did post about it at the time, making many points that unfortunately bear repeating here.)

Last Monday, jihadi suicide bomber Salman Abedi blew himself up at an Ariana Grande concert in Manchester, England, killing 22 people. Salman grew up in an anti-Qaddafi Libyan immigrant family. In 2011, his father, Ramadan Abedi, along with other British Libyans (including one who was under house arrest), “was allowed to go [to Libya], no questions asked,” to join the Libyan Islamic Fighting Group (LIFG), an al-Qaeda-affiliate, to help overthrow Qaddafi. In Manchester, as Max Blumenthal puts it, in his excellent Alternet piece, it was all “part of the rat line operated by the MI5, which hustled anti-Qaddafi Libyan exiles to the front lines of the war.” In Manchester, Salman lived near a number of LIFG militants, including an expert bomb maker. This was a tough bunch, and everybody—including the cops and Salman’s Muslim neighbors—knew they weren’t the Jets and the Sharks. As Middle East Eye reports, he “was known to security services,” and some of his acquaintances “had reported him to the police via an anti-terrorism hotline.”

Could it be any clearer? The Abedi family was part of a protected cohort of Salafist proxy soldiers that have been used by “the West” to destroy the Libyan state. There are a number of such cohorts around the world that have been used for decades to overthrow relatively prosperous and secular, but insufficiently compliant, governments in the Arab and Muslim world—and members of those groups have perpetrated several blowback attacks in Western countries, via various winding roads. In this case, the direct line from Libya to Mali to Manchester is particularly easy to trace.

Too bad more people in Britain and the West hadn’t paid attention to what happened in Mali two years ago. Too bad they hadn’t thought too much about the chain of jihadi proxy interventions that the United States and its allies, or about the connection with the chain of jihadi attacks in Western countries. Too bad they hadn’t recognized the continuing arrogance of the Western (U.S./NATO) and Middle Eastern (Gulf, Israel) powers who think they can unleash and re-leash these jihadi fighters at will. Too bad they don’t understand the contradiction between mourning the bombing of Manchester and crying for the bombing of Syria.

Too bad the Western (i.e., American-directed) media don’t provide what would be necessary to understand these things: ongoing coverage and analysis of the obvious relation between the continuing series of horrors perpetrated by jihadi militants and the continuing series of horrors perpetrated by Western and allied governments. It’s a good bet nobody will have forgotten the Manchester bombing two years from now. It was in merry old England, after all and many of the victims were beautiful British girls. It’s also a good bet that the media analysis will continue to have everyone scratching their heads about why these death-loving Muslims hate us so much. That kind of coverage.

The jihadi attackers in Mali and the jihadi bomber in Manchester were direct products—not accidental by-products, but deliberately incubated protégés—of American-British-French-NATO regime change in Libya, a project that was executed by the Obama administration and spearheaded by Hillary Clinton.

Before the glorious revolution, Libya under Ghaddafi had the highest standard of living of any country in Africa, according to the UN Human Development Index. Before the jihadi onslaught backed by NATO bombing campaign, Ghaddafi’s Libya was an anchor of stability in North Africa, as even the U.S. and British governments knew and acknowledged, per a 2008 cable from American foreign service officer Christopher Stevens, published by Wikileaks:

Libya has been a strong partner in the war against terrorism and cooperation in liaison channels is excellent…Muammar al-Qadhafi’s criticism of Saudi Arabia for perceived support of Wahabi extremism, a source of continuing Libya-Saudi tension, reflects broader Libyan concern about the threat of extremism. Worried that fighters returning from Afghanistan and Iraq could destabilize the regime, the [government of Libya] has aggressive pursued operations to disrupt foreign fighter flows, including more stringent monitoring of air/land ports of entry, and blunt the ideological appeal of radical Islam.

The US-British-French-NATO humanitarian intervention put an end to that by overthrowing the Libyan government under entirely phony pretexts, in contravention of fundamental international law, and in violation of the UN resolution, they claimed as a justification. The executioners and beneficiaries of that aggression where the jihadis who have been rampaging from Mali to Manchester. It’s a bright, clear line.

Ghaddafi himself warned Tony Blair that “an organization [the LIFG].has laid down sleeper cells in North Africa called the Al Qaeda organization in North Africa.” Ghaddafi’s son, Saif, warned that overthrowing Libya’s would make the country “the Somalia of North Africa, of the Mediterranean” and “You will see millions of illegal immigrants. The terror will be next door.”

Thanks to Blair and Obama and Clinton and Sarkozy, that’s exactly what happened. Libya was destroyed as a functioning state, and the terror is now inside every Western door.

Westerners and Americans transfixed by Ghaddafi’s garish posturing may have, and may still, find it hard to accept, but it needs to be said aloud: In 2011, Ghaddafi was right about what was going in in Libya, and all best and brightest militaristic conservatives and “humanitarian” liberals, in and out of government, were wrong. A lot of radical lefties, too, myself included; though I always vehemently opposed the US-NATO intervention, I, too, took Ghaddafi’s complaints for excuses. But lesson learned (by some): What was going on in Libya was the same thing that went on in Afghanistan in the 80s, and the same thing that is going on in Syria today, supercharged by the intervening war in Iraq

Throughout this nefarious chain of destruction, nobody in the world has committed worse crimes than all the “humanitarian” liberals in and out of government who have enacted and/or gone along with the imperialist chaos program of destroying relatively prosperous and secular societies in the Arab and Muslim world, and replacing them with sectarian jihadi playgrounds. And no force in the world is more responsible for the rampaging jihadi wolves, lone and in packs, than the United States and its compliant allies, including Great Britain.

Whether any American liberal wants to or not, anyone who is mourning Manchester needs to hear it said: We’re crying over the horror in Manchester today because yesterday Hillary Clinton was laughing about the horror she inflicted on Libya –including the killing of Ghaddafi by those protected Salafist proxies who sodomized him with a bayonet: “We came. We saw. He died. [big smile, joyous laugther]” Yes, exactly that.

Ha, Ha. Maybe she can get a gig in a comedy club in Manchester.

Really, knowing what we do about Libya through to Manchester, does any of the outrageous things we’ve from Trump equal the despicableness of Hillary’s perverse glee in this video? It’s an image not to be forgotten.

I’m sure that our current president, if he’s given the time—and, if he’s not, some other Republican or Democrat—will meet or exceed the high standards that have been set, but Donald Trump has not yet come near committing the series of crimes for which Hillary Clinton and Barack Obama (following the precedent of five previous American administrations) are responsible. These crimes produced the twin horrors of imperialist and jihadi chaos, of which the destruction of the Libyan state was one egregious example, and the killing of young concertgoers in Manchester another. This represents a deep, persistent bipartisan policy that is much more important and difficult to confront than the question of which front man or woman will be selling it.

Manchester is the latest iteration of a scenario we’ve gone through so many times now, like some groundhog-day dream. At the end of my post two years ago, I was urging and hoping that Americans would wake up. But a lot of American liberals and lefties, including Berniebots, still like to imagine there’s a political space they can inhabit called Progressive Except Imperialism. There isn’t. Imperialism with Social Security and Medicare and Obamacare—even single-payer healthcare—is imperialism, and it’s reactionary and supremacist. Equal-opportunity imperialism is imperialism. African-American, women, Latinx, or LGBTQ presidents, generals, and drone operators do not make it any less criminal, or dangerous, or any less inevitably erosive of all those cherished progressive domestic programs.

Ignoring or putting aside what the U.S. does in Libya, or Iraq, or Syria, or Palestine because…Trump! The Republicans! is ignoring a fundamental element of a progressive politics as well as an immediate danger to the country. One can do it, but those who do, can’t claim to be seriously confronting the horrors of a tragedy like Manchester, no matter how many tears they shed.

I’m afraid that is where we’re stuck. The absurdity of Trump is drawing more well-meaning people into the flames of nostalgia for an imaginary Democratic copasetic state that disappeared on January 20th. The #Resistance can’t even get its act together for single-payer healthcare—the easiest sell imaginable; it’s not only avoiding the more contentious issues regarding American aggression in places like Libya and Syria, it’s succumbing to the dangerous, war-mongering, Russophobic program of the military-intelligence complex.

It’s still dream on, and I fear it will take a shock much greater than Manchester before Americans finally get the news.

Jim Kavanagh edits The Polemicist, where this editorial first appeared.