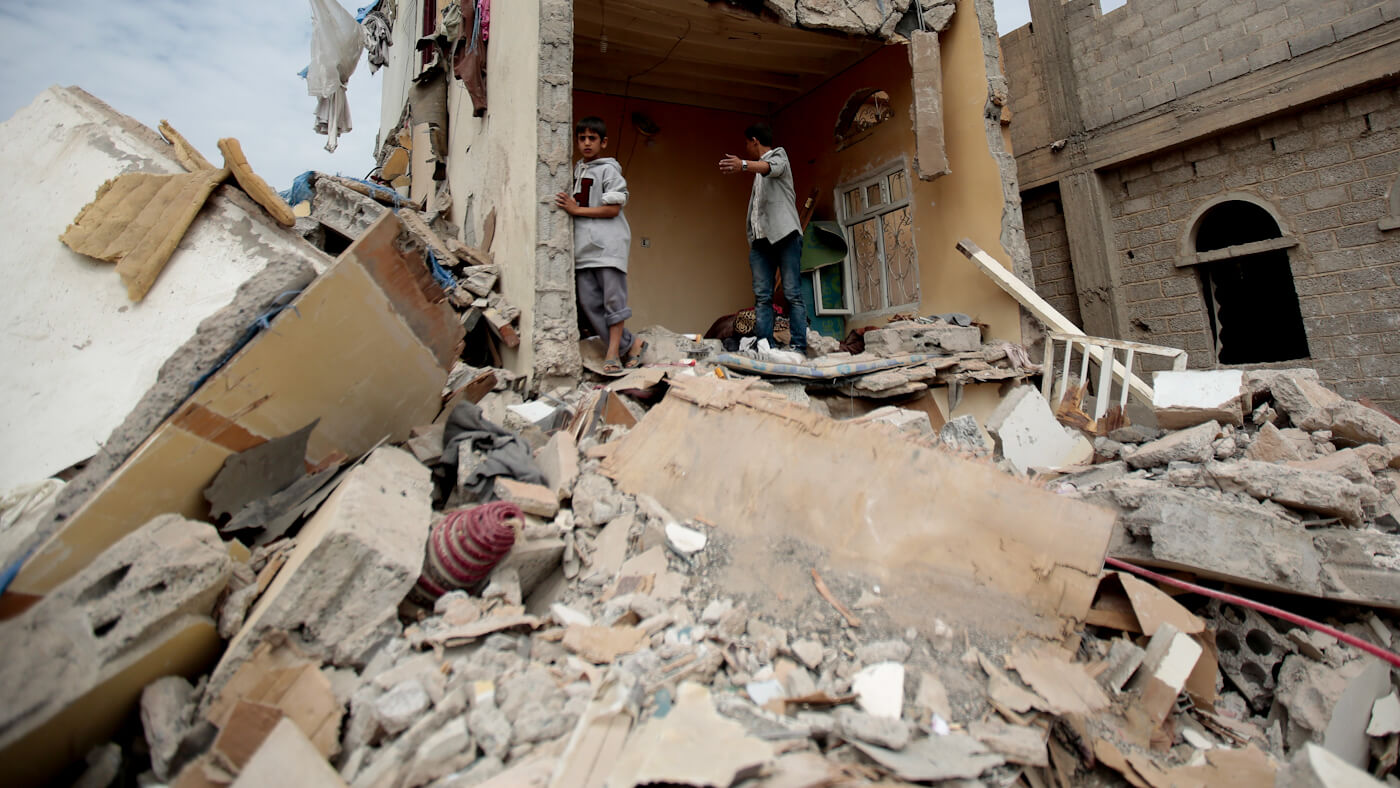 HAJJAH, YEMEN – “We’re brutally bombed every day. So why doesn’t the Western world care like it does about Ukraine?!!… Is it because we don’t have blonde hair and blue eyes like Ukrainians?”  Ahmed Tamri, a Yemeni father of four, asked with furrowed brows about the outpouring of international support and media coverage of Russia’s invasion of Ukraine and the lack of such a reaction to the war in Yemen.

Over the weekend, a member of Tamri’s family was killed and nine relatives injured when their family home was targeted in a Saudi-led Coalition airstrike in the remote al-Saqf area in Hajjah Governorate. Tamri claims that al-Saqf has been subjected to a brutal Saudi bombing campaign for the past seven years – more so, he says, than all of Ukraine has endured since it was invaded by Russia.

Despite the horrific bombing campaign against Yemeni civilians, Saudi Arabia’s human rights violations and war crimes have garnered nowhere near the level of coverage and sympathy that the mainstream Western media has rightfully given to Ukraine. “They shed tears for the Ukrainians, and ignore our tragedies… What hypocrisy and racism!” Tamri told MintPress News.

As the Russian invasion of Ukraine continues into the sixth day, an outpouring of support for Ukrainians continues to be seen across the Western world. Severe sanctions against Russia have been imposed by the United States, Europe, Australia, and the West in general, amid a flurry of emergency talks at the UN Security Council. The speed of Western retaliation – which includes banning Russia from the SWIFT (Society for Worldwide Interbank Financial Telecommunication) international banking network and calls to treat Russians as international pariahs in sports, culture, and even science – has raised eyebrows among Yemenis who have endured a relentless bombing campaign and deadly air, land, and sea blockade for 2,520 consecutive days.

Since Thursday, when Russian forces began their wide-ranging assault on Ukraine, the Saudi-led Coalition, supported by the United States, has launched more airstrikes in Yemen than Russia has in Ukraine. In Hajjah, a province surrounded by heavy Saudi artillery, Saudi-led coalition warplanes launched more than 150 airstrikes on the cities of Haradh, Heiraan, Abbs, and Mustab, killing scores of civilians, including a father of six killed over the weekend by a Saudi drone that targeted his car as it traveled between Shafar and the Khamis Al-Wahat market.

Since Russia’s incursion into Ukraine began, dozens of civilians, including a number of African migrants, have been killed and hundreds wounded by Saudi artillery and airstrikes in Yemen’s heavily populated Saada province, declared a military area by Saudi Arabia at the start of its military campaign in March 2015. 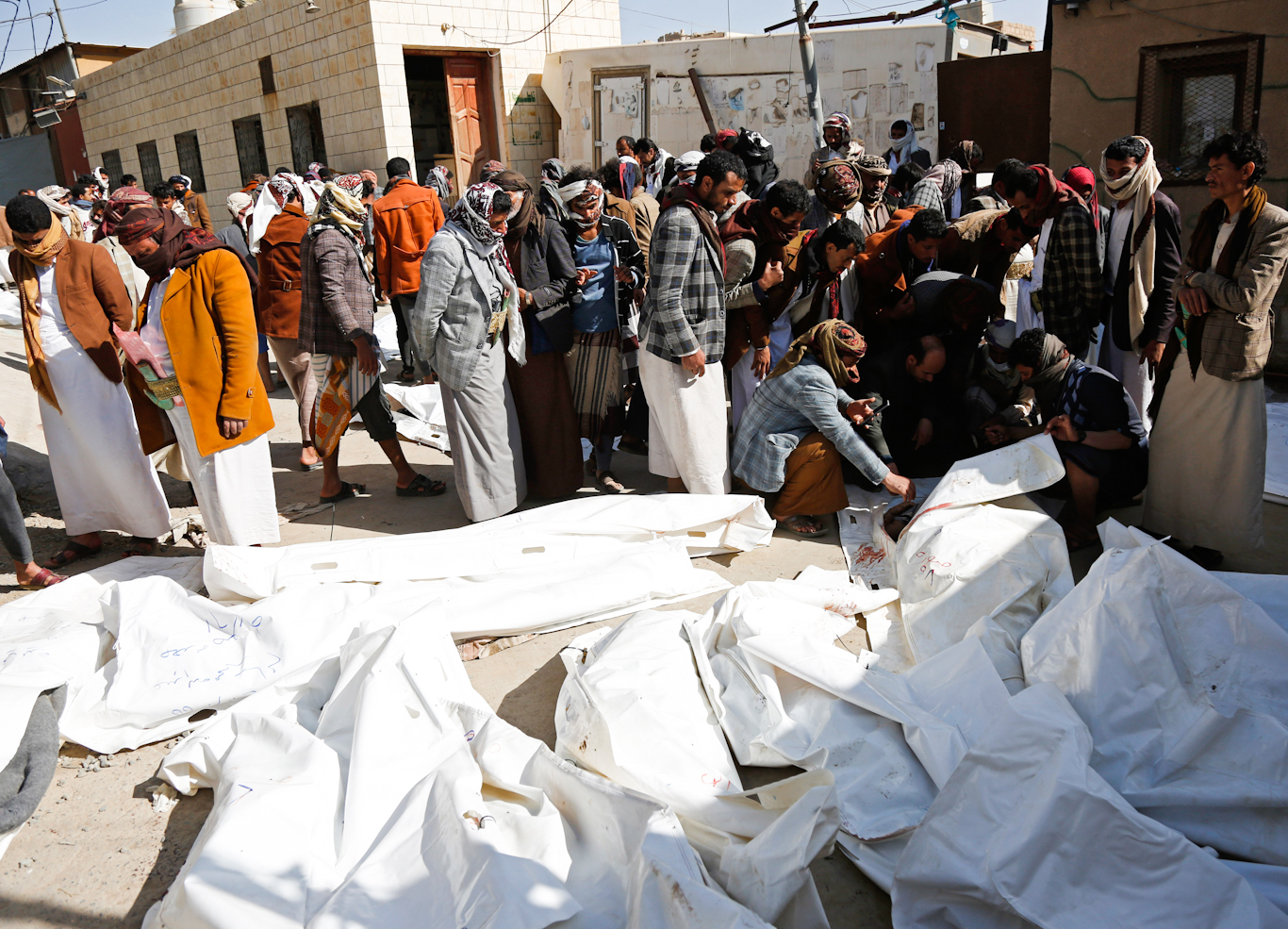 The bodies of civilians from a Saudi airstrike that killed at least 87 people on the Yemen-Saudi border, Jan. 22, 2022. Hani Mohammed | AP

As news cameras and solidarity protests gave much-needed sympathy to Ukrainian civilians, in Sana’a, Yemen – which has effectively been turned into a large prison for the city’s more than four million residents and refugees, thanks to a crippling Saudi blockade – warplanes bombed a number of densely populated areas, including the airport. An additional 160 airstrikes were launched on the provinces of Marib, al-Jawf, al-Baydha, Taiz, Najran, and Hodeida, the main entry point for commercial goods and aid into a country facing the worst man-made famine in the 21st century.

In fact, it seems as though the Saudi regime is taking advantage of a distracted media in order to escalate attacks on a number of sensitive targets along the Yemen-Saudi border and strengthen its hold over the Al-Mahra Governorate. The UAE, the other major Western-backed oil monarchy occupying Yemen, is likewise making hay, accelerating its project to change the demographics on the prized Socotra Island by displacing locals in favor of settlers more aligned with UAE policies. And while the U.S. readies massive shipments of arms and military aid to Ukrainian “freedom fighters” defending against a Russian invasion, Yemeni “rebels” downed an American-made MQ9-1 drone flown by the UAE in al-Jawf and two American-made Boeing Insitu ScanEagles in Marib and Hajjah.

As countries that have spent the past decades building literal and figurative walls to keep out desperate brown and black refugees fleeing violence and foreign invasion in their own lands open their arms, homes, and hearts to fleeing Ukrainian refugees, Saudi Arabia unleashed a force of Yemeni mercenaries upon their homeland with a promise of a Saudi green card and safety for their families if they turn on their fellow countrymen. Ironically named the “Happy Yemen Forces,” the unit was finalized in late 2021, according to leaked military documents, with a mandate to secure Saudi Arabia’s border with Yemen and ensure Saudi security in exchange for a green card and access to the Saudi social services that come with it.

If we are to compare

In terms of the sheer cost of human life, the tragedy in Yemen has been much more deadly than that in Ukraine, where 325 Ukrainians, including 14 children have tragically lost their lives according to Ukrainian officials. Granted the war in Yemen has raged on unabated for more than six years, but comparatively the numbers are astonishing. Since 2015 the death toll has reached an estimated 400,000 people, including 3,900 children.

Those deaths have included attacks on civilians so egregious that they did garner fleeting media attention but, inevitably, no sanctions, little international condemnation, not even a cessation in the military aid and support to the perpetrators. Bombed-out schools, funerals, wedding halls, refugee camps, even a school bus full of children targeted by the most advanced U.S. weaponry on offer have not been sufficient to elicit the reaction that Ukraine has garnered in less than one week.

Since 2015, Saudi-led Coalition warplanes have pounded Yemen with over 266,000 airstrikes, according to the Yemeni Army Operations Room, which records airstrikes against civilian and military targets. Seventy percent of those strikes have hit civilian targets. The rising smoke, rubble and flames now seen in Ukraine have been the status quo in Yemen for years, with Western media often deeming the images that appear on local Yemeni television stations, of parents pulling pieces of their children out from the rubble of their homes or schools, too graphic to display.

Thousands of Yemen’s economically vital facilities like factories, food storage facilities, fishing boats, food markets and fuel tankers have been bombed by the Western-backed Saudi Coalition. Critical infrastructure – including airports, seaports, electrical stations, water tanks, roads and bridges and countless more schools, agricultural fields, and places of worship – have been destroyed or damaged. A Saudi blockade and airstrikes on hospitals have crippled Yemen’s health system, leaving it unable to deal with even the most basic public health needs and leaving the 300 facilities that remain in the entire country barely functioning as COVID-19 spreads like wildfire.

As the outpourings of condemnation of Russia’s invasion continue, Western governments have sent massive aid packages to Ukraine and social media campaigns fill in the gaps – while in Yemen the United Nations announced that by March it would likely cut aid to 8 million people in a country that it calls home to the worst humanitarian crisis on earth. Household food insecurity in Yemen hovers at over 80%. Almost one-third of the population does not have enough food to satisfy even basic nutritional needs. Underweight and stunted children have become a regular sight and the worst is yet to come, as the Russian invasion has led to increased fuel and food prices and as humanitarian funding dries up, according to the UN World Food Programme.

Picking and choosing which invasion to condemn

In March 2015, more than 17 countries led by the oil-rich monarchy of Saudi Arabia launched a military invasion of Yemen, a sovereign state and a member of the United Nations. Ostensibly, the war was launched to restore President Abdrabbuh Mansur Hadi to power after he was ousted following popular protests amid the Arab Spring.

By March 26 of that year, the Saudi-led Coalition, backed militarily and diplomatically by the United States, would begin a bombing campaign that has indiscriminately killed, maimed, and destroyed for seven years. Not only has Saudi Arabia, arguably the most repressive dictatorship on earth, forced Hadi back into power under the guise of protecting democracy, but it has also occupied huge swaths of southern Yemen from al-Mahara to the Bab al-Mandab Strait.

Yemeni journalists, activists and politicians have been left to ponder why Western governments – in particular, the Biden administration – condemn Russia for invading Ukraine under the pretext of national security while defending the Saudi regime’s “legitimate right” to invade Yemen under the very same pretext.

Despite the horrific human rights violations carried out by Saudi Arabia in Yemen, Western nations, and the United States in particular, have not only provided lethal weapons, training, maintenance, intelligence, and political and diplomatic cover to the monarchy but have imposed media restrictions on coverage of the Saudi regime’s human rights abuses in Yemen, pressuring tech and social media companies to deplatform and outright ban Yemeni activists and media critical of the war. Yemenis attend a demonstration against the US over its decision to designate the Houthis as a foreign terrorist organization in Sanaa, Jan. 25, 2021. Hani Mohammed | AP

As mainstream Western media gives glowing coverage to Ukrainians resisting their foreign invaders and occupiers – with Western leaders applauding the steadfastness and resistance of Ukrainians and sending aid, weapons and moral support to them – they label Yemenis taking up arms as terrorists and target them with American-made smart bombs and drone attacks. Yemenis who take up arms against invading Saudi and Emirati forces are sanctioned and dismissed as proxies of Iran by liberal media institutions that claim to stand against war.

On Monday, the United Nations Security Council extended an arms embargo and travel ban on Yemeni forces. The resolution strongly condemned what it called cross-border attacks by the “Houthis,” a derogatory term used to refer to Ansar Allalh, the single largest force challenging the Saudi invasion and occupation. It went on to condemn “attacks on Saudi Arabia and the United Arab Emirates” referring to Ansar Allah’s missile and drone attacks on Saudi-led Coalition airports and oil storage facilities.

Commenting on the resolution – which came as the UAE refused to publicly condemn Russia over its invasion of Ukraine, hoping to gain Russian backing for its own invasion of Yemen – Ansar Allah leader Mohammed al-Houthi made one simple request: that Saudi Arabia’s deliberate targeting of civilians in Yemen lead to a Saudi weapons ban. Essentially, al-Houthi asked for a lifting of double standards, apparently an impossible request in today’s political climate.