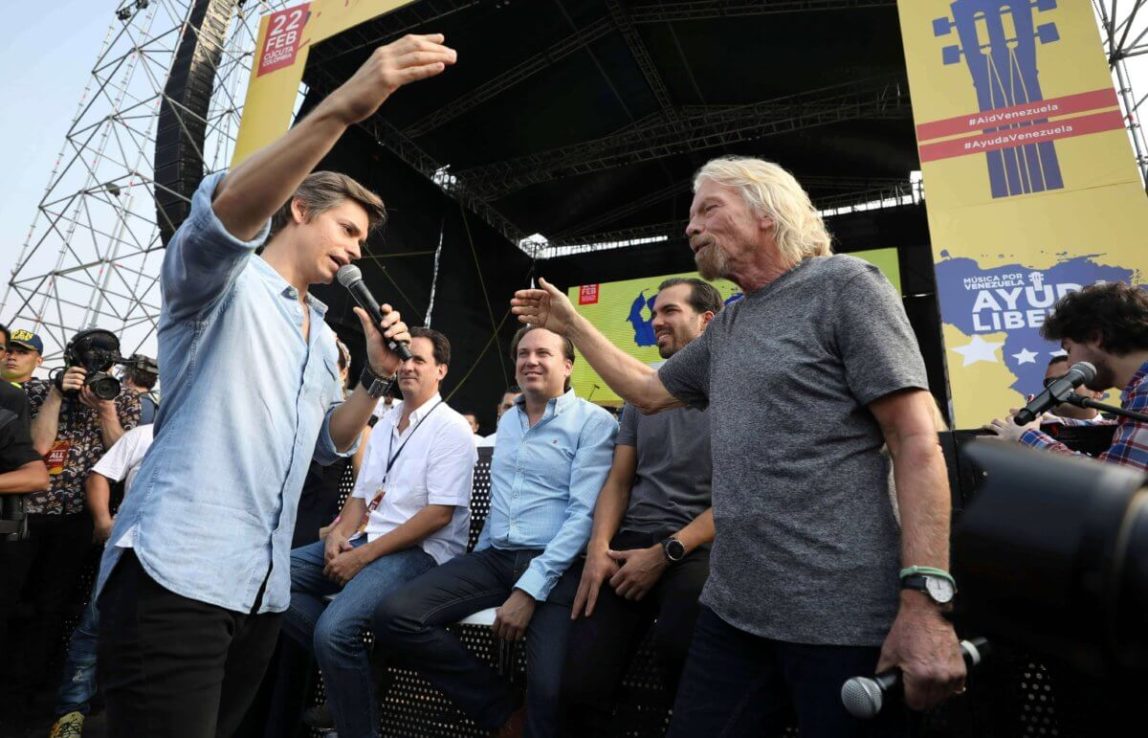 CÚCUTA, COLOMBIA -- Knighted billionaire businessman Sir Richard Branson is hosting a concert on Friday in the Venezuelan border town of Cúcuta, Colombia to raise money for the Washington-backed regime-change push in the Bolivarian Republic. The area has become a flashpoint in the U.S.-backed coup attempt against Venezuela’s elected president,

END_OF_DOCUMENT_TOKEN_TO_BE_REPLACED

Waters’ wearing of a keffiyeh in the pubic eye may seem a small gesture in light of the impending threat from Israel, but his actions and willingness to be vocal and engage on the topic have brought the issue to the attention of countless people. On Sunday, Pink Floyd frontman Roger Waters and actress Lea Seydoux unveiled the Musketeers Cup at the French Open. The trophy was carried into Court Philippe Chatrier hidden in a brown box and unveiled by both Waters and Seydoux before play began. Waters didn’t let the opportunity pass without making a statement in front of fans and cameras.

END_OF_DOCUMENT_TOKEN_TO_BE_REPLACED Waters said he also concluded that The Syria Campaign — the PR firm behind the White Helmets — was not simply the humanitarian voice it purported to be, but a corporate outfit that represented much more prosaic interests. During a Barcelona concert on April 13, Roger Waters denounced the Syrian White Helmets as “a fake organization that exists

END_OF_DOCUMENT_TOKEN_TO_BE_REPLACED

“What we should do is go and persuade our governments not to go and drop bombs on people. And certainly not until we have done all the research that is necessary so that we would have a clear idea of what is really going on.” — Roger Waters BARCELONA, SPAIN – Roger Waters, former guitarist for Pink Floyd and solo performer, spoke out against the Syrian White Helmets during a recent concert in this city, calling the group “fake” and existing for the sole purpose of creating propaganda for a Western audience on behalf of Syrian opposition groups. Waters, who has long been outspoken

END_OF_DOCUMENT_TOKEN_TO_BE_REPLACED

The Pink Floyd guitarist penned a letter to fellow musicians and artists urging them to join him in a cultural boycott against Israeli policies. Renowned Pink Floyd guitarist Roger Waters has penned a letter to fellow musicians and artists urging them to join him in a cultural boycott against Israeli policies, including the occupation of the West Bank and East Jerusalem. The musician who helped the British band Pink Floyd sell 250 million albums worldwide has become more outspoken against