“By including rioting in racketeering laws, it actually permits police to arrest those who are planning events.”

At least eight journalists have been arrested while covering Dakota Access protests in North Dakota. Seven of the cases involve misdemeanor charges that are still pending. BISMARCK (REPORT) — At least five journalists have been charged with engaging in a riot while covering Dakota Access Pipeline protests, an offense that would carry a stiffer penalty under a proposal before the North Dakota Legislature. The Senate Judiciary Committee will hold a hearing on Monday, Feb. 13, on House Bill 1426,

END_OF_DOCUMENT_TOKEN_TO_BE_REPLACED PORTLAND, Ore. — Another night of nationwide protests against Donald Trump's election came to a head in Portland, where thousands marched and some smashed store windows, lit firecrackers and sparked a dumpster blaze. Police termed the protest a riot and used "less lethal munitions" to help clear the streets. Some 4,000

END_OF_DOCUMENT_TOKEN_TO_BE_REPLACED

DOJ: Police effort to handle protests with inappropriate, militaristic tactics not only violated constitutional rights, it effectively antagonized and incited the crowd—creating the very situation police ostensibly sought to prevent. (ANTIMEDIA) Police apologists, who have long claimed the violent response by officers to demonstrations in Ferguson was perfectly justified and appropriate, might soon be eating crow. According to a Department of Justice document

END_OF_DOCUMENT_TOKEN_TO_BE_REPLACED

After racking up tens of thousands of views, Fox acknowledged the “error,” saying: “Our team didn’t fact check the picture the way we should have.” 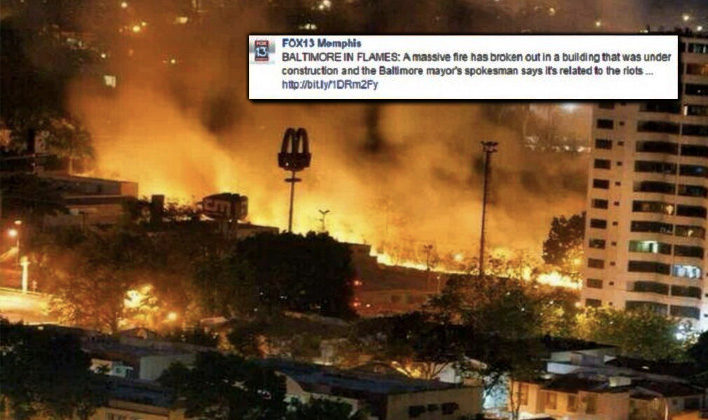 If you are like thousands of others, you have no doubt seen an iconic photo of Baltimore burning. The image began circulating throughout social media after a local Fox affiliate in Memphis, Tennessee apparently first ran it. Some other mainstream media outlets even shared the image, using it with headlines that said “Baltimore is Burning” and

END_OF_DOCUMENT_TOKEN_TO_BE_REPLACED

Be Devoted To Justice Not To Order

The protests in Baltimore, being led by African American youth, have been unifying the city to force Baltimore to face up to a long-standing problem of widespread police abuse. A demonstrator raises his fist as police stand in formation as a store burns, Monday, April 27, 2015, during unrest following the funeral of Freddie Gray in Baltimore. The announcement by State’s Attorney Marilyn Mosby that the six officers involved in

END_OF_DOCUMENT_TOKEN_TO_BE_REPLACED

The case of Freddie Gray, a black American, who died after a brutal arrest, has brought renewed attention to the Baltimore Police Department, but this incident is just one of many in the department’s corrupt history. A protestor stands in front of riot Police Monday, April 27, 2015, following the funeral of Freddie Gray in Baltimore. The mainstream media is consumed by Baltimore’s reaction to the death of Freddie Gray, a black man who died of severe spinal injuries after a violent arrest. While the TV networks highlight images of a burning CVS, less