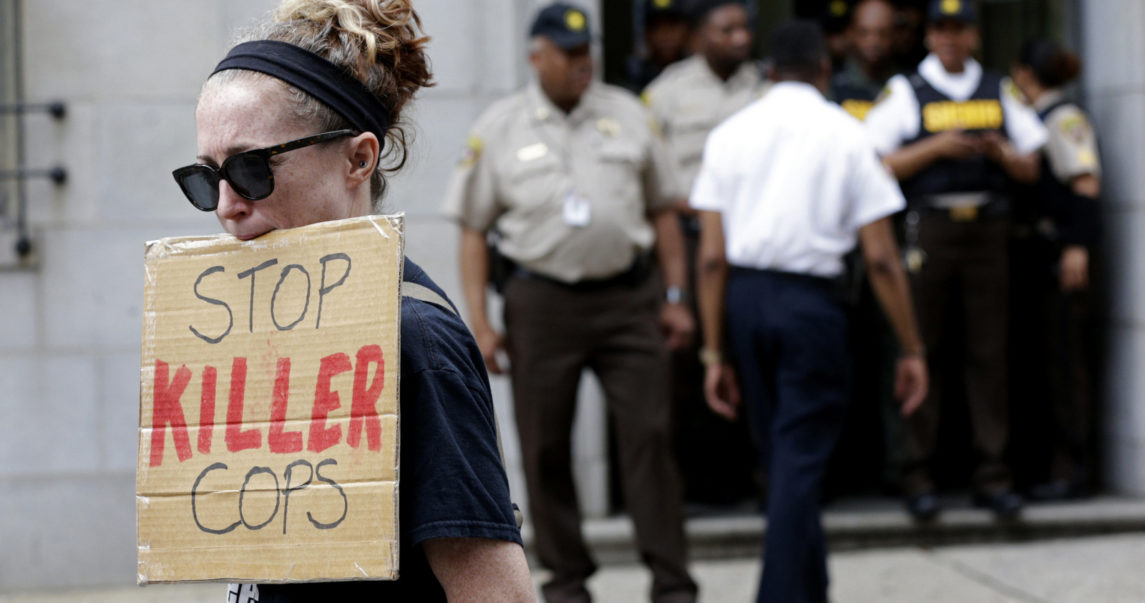 WASHINGTON – The Washington Post reported that 2017 saw close to

END_OF_DOCUMENT_TOKEN_TO_BE_REPLACED

“I think as we look at how to change policing and how we get officers to not react to use their gun in situations, but learning skills around de-escalation training I think are important.” Minneapolis, MN — Amid several high profile police brutality cases in Minneapolis, a mayoral candidate in the twin cities is advocating stripping the majority of police officers of guns in their routine patrols. Local Fox affiliate KMSP

END_OF_DOCUMENT_TOKEN_TO_BE_REPLACED

Police Killings Down In 2016, But Activists Fear Trump Could Reverse The Trend

‘We can anticipate draconian policy changes and the rolling back of hard-won civil rights under the incoming Trump administration,’ wrote Candice Bernd, an activist and reporter at Truthout. AUSTIN, Texas --- Available data suggests that fewer people have died from police violence in 2016 than in 2015, but some police reform activists are concerned that this trend won’t survive the administration of President-elect Donald Trump. At least 1,000 people have been killed by police in 2016, though the lack of available federal data

END_OF_DOCUMENT_TOKEN_TO_BE_REPLACED

One analyst suggested in 2012 that Americans are eight times more likely to be killed by a cop than a terrorist. But that estimate is probably low because police departments don’t have to disclose details on police killings and the U.S. government doesn’t formally track them. MINNEAPOLIS --- Despite a number of high-profile attacks that have resulted in the deaths of thousands of Americans both in the United States and abroad, police continue to pose a far deadlier and more immediate threat to Americans than terrorists. At least 8,882 civilians have been killed by police since 9/11. This figure is based on government

END_OF_DOCUMENT_TOKEN_TO_BE_REPLACED

Just 34 police officers have been shot during the same time period, and one criminal justice blogger called 2015 “the second safest year for police ever.” Police have killed over 1,000 people in 2015, and about 20 percent of those killed were completely unarmed. As of Monday evening, U.S. police had killed 1,024 people since the start of the year, according to The Counted, a

END_OF_DOCUMENT_TOKEN_TO_BE_REPLACED

I’m Tired, But I’m Not Finished: Are We Ready To Call It Racism Now?

It seems we live in an American society that is hellbent on euthanizing black hope and injecting our despair and frustration with adrenaline. We abide in a country that counts our lives as cheap, and through brutal conditioning has taught too many us to feel the same. A note from the author: Many things have transpired since I last penned a piece for MintPress News, but I am reminded of an old saying: “The more things change, the more they stay the same.” I’ve felt the tug and the pull of picking up the pen, so to speak, but the inertia of health and honest-to-goodness heartache concerning