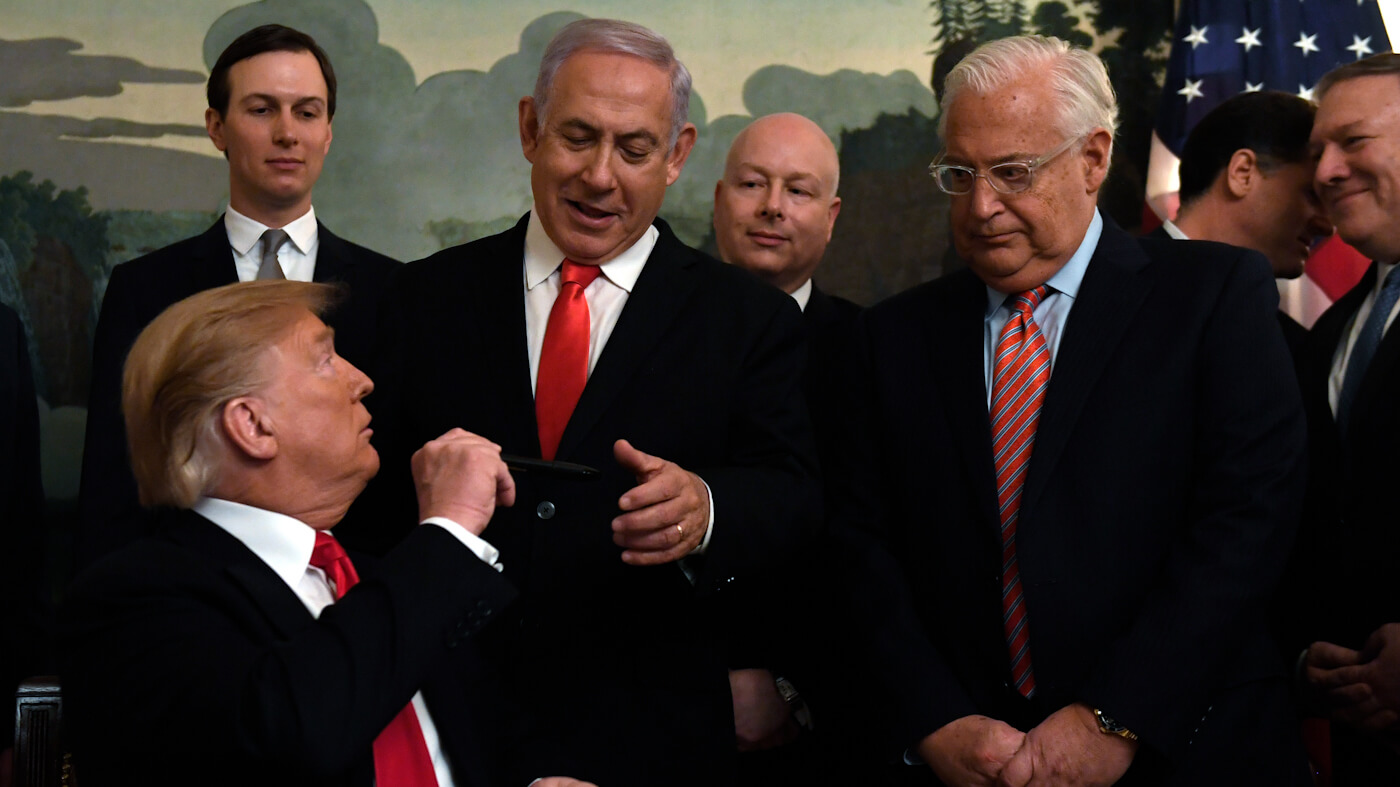 Trump’s Deal of the Century Will Use Sanctions, Military Threats to Force Palestinian Acceptance

The U.S. is already implementing its “peace” plan on the ground by moving the U.S. embassy to Jerusalem, withdrawing support for a two-state solution, cutting funds to the UNRWA, and normalizing Israeli apartheid in Palestine. TEL AVIV, ISRAEL – Saudi Arabia, Jordan, the United Arab Emirates (UAE) and Egypt are supporting Donald Trump’s “deal of the century” aimed at brokering peace between Israel and the Palestinian Authority (PA), according to a report published in Israel’s largest newspaper. The report, published in Israel Hayom, asserts that the four countries

END_OF_DOCUMENT_TOKEN_TO_BE_REPLACED The “deal of the century” is a farce. We suspected that, of course, but, upon his return from Washington, Israeli Prime Minister Benjamin Netanyahu revealed in more detail why the long-anticipated plan of the administration of US President Donald Trump has no basis in reality. Netanyahu told his Cabinet that there are “no concrete details” to

END_OF_DOCUMENT_TOKEN_TO_BE_REPLACED

Iran Proposes a Path to Peace in the Middle East

In an article published by the Financial Times on Monday, Iran’s Foreign Minister Mohammad Javad Zarif laid out the country’s proposed framework for bringing stability to the Middle East region. "ISIS displayed the darkest depths of human evil,” Zarif wrote. Yet it also provided an opportunity to come together to battle an existential threat.

END_OF_DOCUMENT_TOKEN_TO_BE_REPLACED

Ehud Barak has published an article in The New York Times attacking prime minister Netanyahu, he also used the article to publish his disappointing Peace Plan.

Ehud Barak has "broken the silence". He has published an article in The New York Times attacking our prime minister in the most abrasive terms. In other words, he has done exactly the same as the group of ex-soldiers who call themselves "Breaking the Silence", who are accused of washing our dirty linen abroad. They expose war crimes to which they

END_OF_DOCUMENT_TOKEN_TO_BE_REPLACED

Kerry last month persuaded the Arab League to sweeten the deal by saying Israel-Palestine borders could be modified from 1967 lines.

JERUSALEM — On the surface, the Arab League's improved peace initiative offers Israel everything it ever dreamed of — normal relations with an entire region that has long objected to the very existence of the Jewish state, and even the chance to keep some war-won land. But two weeks after U.S. Secretary of State John Kerry persuaded Arab leaders

END_OF_DOCUMENT_TOKEN_TO_BE_REPLACED

Israel’s prime minister said that any peace deal reached with the Palestinians would be subject to a national referendum, a contentious step that could hinder peace efforts.

JERUSALEM — Israel's prime minister said Thursday that any peace deal reached with the Palestinians on his watch would be subject to a national referendum, backing a contentious step that could hinder peace efforts. Negotiations between Israel and the Palestinians have been frozen for more than four years, but the referendum issue re-emerged