“I wholeheartedly ask you not to allow your country to be dragged once again into another unending conflict, another Vietnam, another Iraq, but this time, closer to home.” Venezuelan President Nicolas Maduro released a letter addressed to the American people, urging them to oppose military intervention in South America and instead push the Trump administration to concentrate on tackling the COVID-19 pandemic raging across the United States. “It is clear that the Trump Administration is creating a smokescreen to cloud

END_OF_DOCUMENT_TOKEN_TO_BE_REPLACED

Despite heavy backing from US officials, the coup attempt fell completely flat as Venezuela’s armed forces failed to defect to Juan Guaidó’s side and few opposition protesters trickled into the streets. Fresh off a successful military coup deposing leftist President Evo Morales in Bolivia last week, the United States attempted to overthrow the government of Nicolás Maduro in Venezuela this weekend. The events, however, went barely noticed outside the South American nation, as the attempt proved to be a complete fiasco.  U.S.-backed

END_OF_DOCUMENT_TOKEN_TO_BE_REPLACED 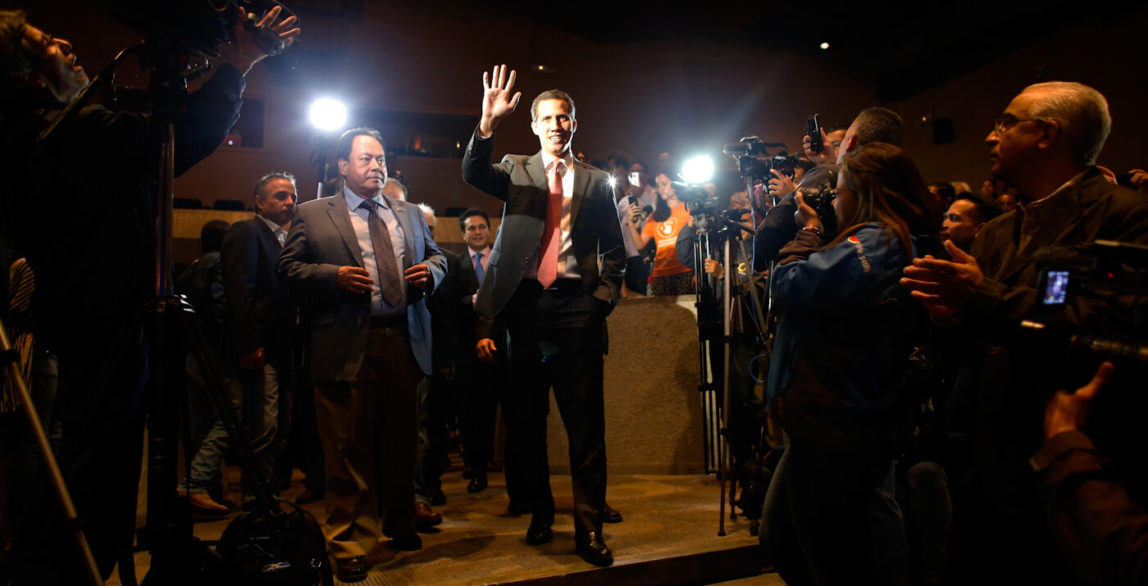 Venezuelanalysis -- Guaido’s uprising is going through its terminal phrase. He does not yet appear to have reached his end as leader, as he still produces and consolidates an important consensus among the opposition. What has decisively failed is his attempt to form a government without elections with the backing of the hawks in Washington. In

END_OF_DOCUMENT_TOKEN_TO_BE_REPLACED Even the corporate media are losing enthusiasm for the US government’s ploy to replace the democratically elected President Nicolás Maduro of Venezuela with the US-anointed security asset Juan Guaido.  Reuters reports in a July 1 article, “Disappointed Venezuelans lose patience with Guaido as Maduro hangs on,” that the US-backed “military uprising”

END_OF_DOCUMENT_TOKEN_TO_BE_REPLACED

“The first goal is to capture [Maduro]. And have the world see it. […] Dead, so that the message is clear, this son of a bitch is done,” ex-airforce General Miguel Carmelo Sisco is seen telling other alleged conspirators in one of the videos.

The Venezuelan government has reportedly dismantled a plan to stage a violent putsch in recent days. Communications Minister Jorge Rodriguez revealed on Wednesday that a large scale plan was set to be executed on June 23 or 24. The operation allegedly included the assassination of President Nicolas Maduro, National Constituent Assembly President

END_OF_DOCUMENT_TOKEN_TO_BE_REPLACED

WOLA’s hawkish stance on Venezuela may seem surprising for a “human rights” organization, but it is less of a surprise for those familiar with WOLA’s history. The Washington Office on Latin America (WOLA), a self-described “human rights” NGO (non-governmental organization), has been circulating a June 1 press release ostensibly urging the return of democracy to Venezuela. The press release cites the “value” of “pressure mechanisms” such as “multilateral” sanctions when they are “linked to clear