Honoring the Life of a Journalist Killed in Kashmir

From bans on eating beef, regular disruption of cell and internet service and renewed violence against civilians, India’s ruling Hindu Nationalist Party has ushered in a new level of repression in Kashmir.

A sweeping social media gag; dozens of Kashmiri female students defiantly protesting Indian military troop presence; a Kashmiri man tied to an Indian military vehicle as a human shield against stone-pelting protesters. These are just some of the latest stories to come out of the Kashmir Valley in India's north-eastern state of Jammu and Kashmir,

END_OF_DOCUMENT_TOKEN_TO_BE_REPLACED India's National Investigation Agency (NIA) — a counter-terrorism law enforcement agency — has outlined what Kashmiri journalists should report on in a court response that was issued after the arrest of 23-year-old Kashmiri photojournalist Kamran Yousuf. Yousuf worked as a freelance photojournalist for many local dailies including Greater

END_OF_DOCUMENT_TOKEN_TO_BE_REPLACED

Officials defended the inhumane act of using a human shield as a measure to save its personnel from protesters’ stone-pelting. 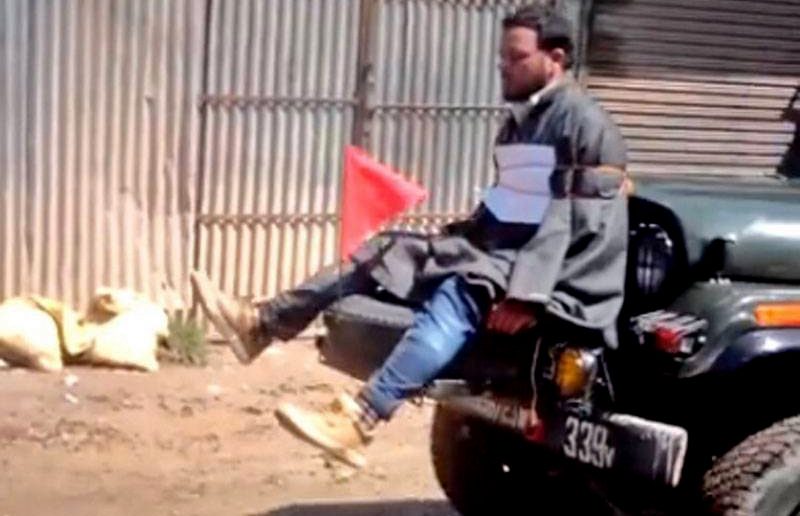 Just last month, video footage of a young man tied to the front of an army vehicle being paraded in villages located in central Kashmir's Budgam district went viral. On Monday, Major Leetul Gogoi, who tied the young man to the front of the vehicle was awarded the army chief’s commendation card. Colonel Aman Anand, an army spokesperson, said in a

END_OF_DOCUMENT_TOKEN_TO_BE_REPLACED

The Jammu and Kashmir government Wednesday blocked nearly 22 social media websites alongside internet service providers for a period of one month or until further notice to get a grip on the escalating protests and clashes in the conflict-ridden region. The state government issued an order signed by the principal secretary in the state’s home

END_OF_DOCUMENT_TOKEN_TO_BE_REPLACED

An Indian Army spokesperson, Colonel Rajesh Kalia, said in a statement, “The contents of the video are being verified and investigated.”

Video footage showing a young man tied to the front of an army vehicle being paraded in a village located in central Kashmir's Budgam district went viral last week over social media. A Hindi-speaker heard in the background says, "Stone throwers will meet a similar fate." An Indian Army spokesperson, Colonel Rajesh Kalia, said in a statement,

END_OF_DOCUMENT_TOKEN_TO_BE_REPLACED

In the past five months more than 6,000 people, mostly young men, have been injured by shotgun pellets, including hundreds blinded in one or both eyes. SRINAGAR, India — Indian authorities call the shotgun shells filled with hundreds of small metal pellets a "non-lethal" weapon for crowd control, but that does not make them harmless. They've inflicted a permanent toll on hundreds of Kashmiris hit by them. Their faces are scarred. Their eyes are damaged or simply gone, replaced with prosthetics.