Though many are aware of the ongoing conflict in Syria, few know the horrors that have been perpetrated by terror groups operating in the country backed by the CIA and NATO. Kidnapping and torture represent just some of the brutality they have inflicted. Today, we hear from one of the victims of these crimes.

Just last week, the “New Syrian Army,” a moniker for the discredited FSA, suddenly appeared on the Iraqi-Syrian border, “cutting off” ISIS supply lines leading back and forth between the two countries. (OPINION) -- The French colonial green, white, and black banner of Syria adapted by the West’s proxy “Free Syrian Army” (FSA) had long been forgotten in the sea of black banners held aloft by Washington and Riyadh’s more extreme ploy to gain leverage upon and more direct access to the battlefield. However, as Syrian forces

END_OF_DOCUMENT_TOKEN_TO_BE_REPLACED

The Homs Liberation Movement, a Free Syrian Army faction close to al Qaeda, plans to infiltrate the Syrian military to find where the Russians are—and blow them up. After more than a week of Russian aerial attacks, Syrian rebels plan to hit back with double agents and suicide bomber

END_OF_DOCUMENT_TOKEN_TO_BE_REPLACED

ANALYSIS: Who Are The “Moderates” Washington’s Supporting In Syria?

The U.S. is sending hundreds of million of dollars to them, and U.S. allies are rallying in support of them, but who, exactly, are Syria’s so-called “moderates” and how much longer can they avoid being sucked into the radical extremism taking hold of the Middle East? 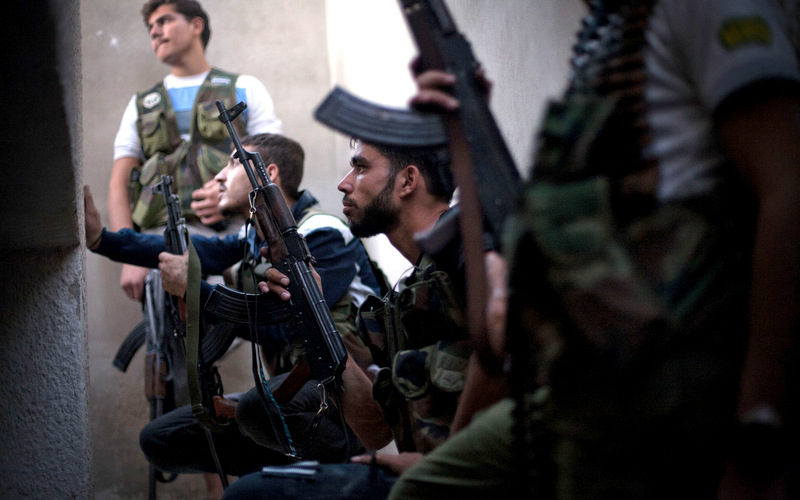 FSA fighters take cover from incoming Syrian Army fire in the Izaa district in Aleppo, Syria, Wednesday, Sept. 12, 2012.  Photo: Manu Brabo/AP President George W. Bush declared his “war on terror” in shortly after 9/11, using an address to a joint session of Congress and the

END_OF_DOCUMENT_TOKEN_TO_BE_REPLACED

Over 500 Killed As ISIS Seizes Key North Syria Air Base

This means ISIS now controls the entirety of Deir Ezzor and Raqqa Province, and also holds portions of Hasakah, Aleppo, Hama, and Homs. A multi-day siege on the key Tabqa Air Base in Syria’s northern Raqqa Province has ended with an ISIS victory, and the ouster of the Syrian military from their

END_OF_DOCUMENT_TOKEN_TO_BE_REPLACED

Bleeding By Proxy: MintPress Peels Back The Layers Of The Syrian Opposition

With the Syrian war turning into a proxy war marked by sectarian clashes, MintPress looks at the opposition groups involved, who is supporting them and why.

WASHINGTON --- Since the onset of the war in Syria, the Obama administration has openly lent its support to the Free Syrian Army along with many Western nations, including France, Turkey and the Gulf Arab states -- particularly Saudi Arabia and Qatar -- in an open and active attempt to bring regime change to Syria by toppling the