Industrial pollution from Indian pharmaceutical companies making medicines for nearly all the world’s major drug companies is fuelling the creation of deadly superbugs, suggests new research. Global health authorities have no regulations in place to stop this happening. A major study published today in the prestigious scientific journal

END_OF_DOCUMENT_TOKEN_TO_BE_REPLACED 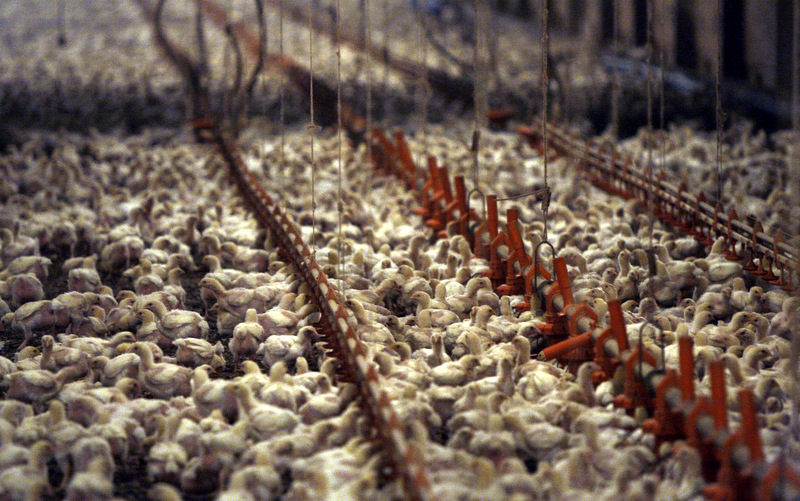 Burger King, Jack in the Box, Dunkin’ Donuts, Arby’s, and a number of other fast food companies and restaurants are failing to reduce antibiotics in their animal livestock, according to a new joint analysis conducted by leading environmental and consumers groups. “Chain Reaction II” (pdf) was released this week by the Natural Resources Defense

END_OF_DOCUMENT_TOKEN_TO_BE_REPLACED

‘Reducing the needless use of antibiotics will slow the emergence of antibiotic-resistant microbes, so-called superbugs, which are among the most urgent public health threats of our time.’ New findings published Tuesday shed more light on the rising problem of "superbugs," or antibiotic-resistant microbes, showing that at least 30 percent of antibiotics prescribed in the United States are unnecessary. Modern Healthcare describes the analysis as "the first detailed look at all antibiotic prescribing throughout the country." The

END_OF_DOCUMENT_TOKEN_TO_BE_REPLACED

Your Thanksgiving Leftovers Could Be Helping To Stop Antibiotic-Resistant Diseases

Labeling on turkeys can be confusing and misleading, but buying an organic, humanely-raised turkey offers clear benefits. MINNEAPOLIS --- As shoppers consider their holiday poultry options, they’ll find a confusing array of labels on their potential turkeys. Rather than searching for keywords like “hormone-free” to “cage-free,” a leading consumer watchdog group is urging buyers to look for “organic” instead. According to Consumer Reports, a growing number of health

END_OF_DOCUMENT_TOKEN_TO_BE_REPLACED

A few small studies yield promising results in using oregano oil to reduce antibiotic use in the livestock industry, but much more research is needed before its effectiveness can be clearly demonstrated.

MINNEAPOLIS --- As more consumers seek out antibiotic-free meat, some farmers are turning to oregano oil as an alternative therapy to keep livestock healthy. While some preliminary research supports the concept, scientists are reluctant to endorse many of the claims made about the essential oil’s healing powers. Resistance to antibiotics is a

END_OF_DOCUMENT_TOKEN_TO_BE_REPLACED

LONDON (AP) — Bacteria resistant to antibiotics have now spread to every part of the world and might lead to a future where minor infections could kill, according to a report published Wednesday by the World Health Organization. In its first global survey of the resistance problem, WHO said it found very high rates of […]

LONDON (AP) — Bacteria resistant to antibiotics have now spread to every part of the world and might lead to a future where minor infections could kill, according to a report published Wednesday by the World Health Organization. In its first global survey of the resistance problem, WHO said it found very high rates of drug-resistant E. coli