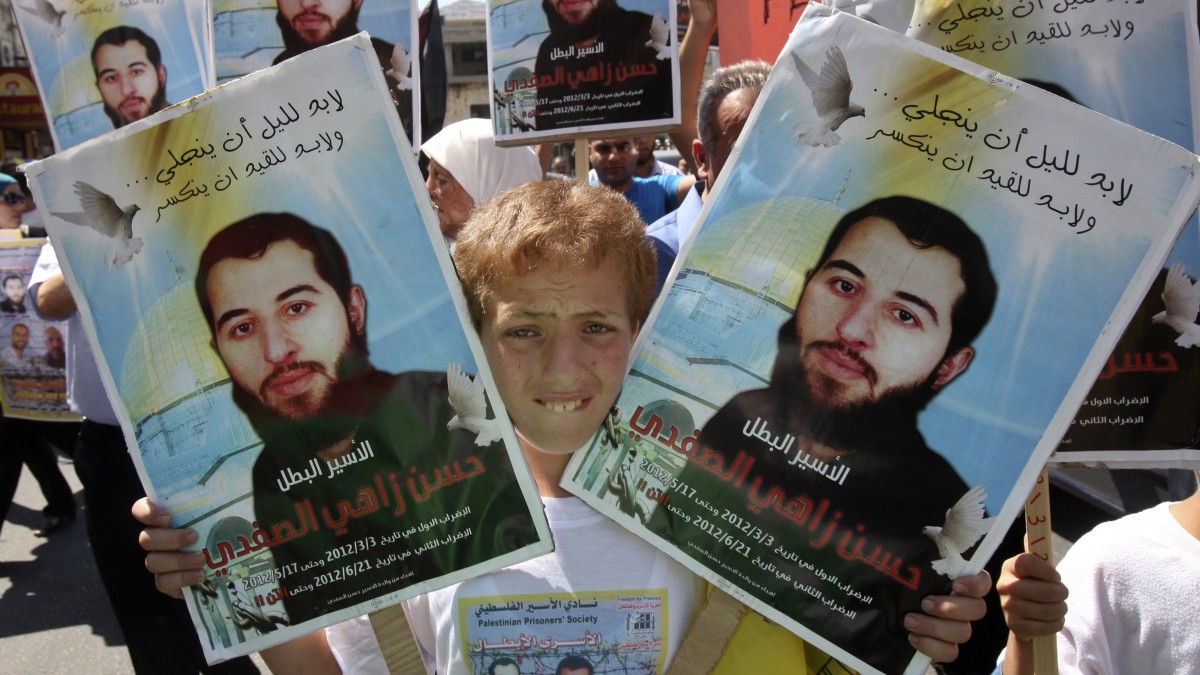 Starving For Justice: The Case Of Samer Al-Issawi And The Use Of The Hunger Strikes

Samer Al-Issawi is a man on a mission. Close to death and unable to move under his own power, Al-Issawi has been on an open hunger strike for more than 177 days. A Palestinian, Al-Issawi is protesting his detention in an Israeli prison. He has no charges against him. As reported on Mondoweiss, an Israeli […]

Palestinians hold pictures of Hasan Safadi, who according to relatives has renewed a hunger strike for 87 days, during a protest calling for his release from an Israeli jail, in the West Bank city of Nablus, Saturday, Sept. 15, 2012. (AP Photo/Nasser Ishtayeh)

Samer Al-Issawi is a man on a mission.

Close to death and unable to move under his own power, Al-Issawi has been on an open hunger strike for more than 177 days. A Palestinian, Al-Issawi is protesting his detention in an Israeli prison.

He has no charges against him.

As reported on Mondoweiss, an Israeli magistrate has denied al-Issawi’s appeal for release Jan. 16.  Al-Issawi will have to wait until Feb. 5 when the Ofer military court will decide if he should remain in custody.

Al-Issawi has committed to not eat until he is free, saying “I will not retract from the battle of freedom except as a martyr.”

Samer Tariq al-Issawi was born Dec. 16, 1979 in Al-Issawiya, a village northeast of Jerusalem.  His grandfather was among the first members of the Palestinian Liberation Organization. His grandmother was martyred during the first Intifada — which was the first organized resistance by the Palestinians against Israeli occupation and consisted mostly of non-violent resistance and lasted from 1987 to 1993. His mother and father were detained in the 70s by the Israelis, his oldest brother was killed in the 1994 Ibrahimi Mosque massacre — in which Baruch Goldstein, an Israeli-American settler, went on a shooting spree, killing 29 Palestinian Muslims dead and injuring more than 125 — and all six of his brothers and sisters were arrested by the Israelis.

Al-Issawi has been arrested four times and has spent 12 years in Israeli custody. On April 15, 2002, Al-Issawi was captured and arrested by the Israeli army in Ramallah during a raid of West Bank cities, dubbed “Operation Defensive Shield.”  This action was triggered when a Palestinian suicide bomber detonated himself during a Passover seder at the Park Hotel in Netanya. The bombing killed 30 elderly vacationers and brought down the condemnation of the Israeli Knesset.  Nearly 7,000 Palestinians were arrested by the Israelis, while 497 Palestinians were killed and 1,447 were wounded in actions that Amnesty International, Human Rights Watch, the European Union and the United Nations condemned Israel for engaging, particularly, the massacre in Jenin.

After 10 years of imprisonment, in October 2011, Al-Issawi was released in an Egypt-brokered deal between Hamas and the Israeli government, which saw the release of 476 Palestinian prisoners. On July 7, 2012, however, the Israelis arrested Al-Issawi for breaking the terms of his release by leaving Jerusalem.

He was arrested in Hizma, a Palestinian village within the Jerusalem Governorate.

Al-Issawi was beaten by security forces during a December court appearance.  He was attempting to reach out to touch his mother.  When asked for an adjournment for medical treatment for al-Issawi, the presiding judge refused and continued the hearing, despite the medical trauma of al-Issawi. Only after the hearing concluded did the judge order medical treatment. A spokeswoman from the prison stated that al-Issawi was “fine” after the courtroom assault.  Al-Issawi’s mother said, with regard to her son’s treatment by the Israelis, “I wished death the moment he was attacked by the Israeli soldiers while trying to touch my hand in the recent court session, where he was beaten brutally before the eyes of the judges of the Court.”

She continues, “I was shocked when I saw Samer for the first time after his arrest and his declaration of hunger strike to protest the re-arrest, where his body became weakened, tired and exhausted that he could not walk. I want him to come back the way he went out from my house, that is, in a good health and well-being. I do not want to receive a damaged lifeless flesh; my son dies every day and we die with him every hour.”

The Ministry of Prisoner Affairs has stated that al-Issawi have rejected offers of release on condition of exile.

The power of hunger

Al-Issawi is but the latest to embrace hunger in political protest. Since Mohandas Gandhi’s famous hunger strikes, which all resulted in Gandhi’s release from prison as the British feared the hit to their reputation if someone as esteemed as Gandhi died in their custody, the hunger strike has been a potent tool in non-violent protest — although it can be construed that starvation constitutes self-inflicted abuse.

Gandhi’s Satyagraha theory suggests that the ends must justify the means, as the way you achieve a goal is inseparable from the goal. Gandhi best explained it this way: “If I want to deprive you of your watch, I shall certainly have to fight for it; if I want to buy your watch, I shall have to pay for it; and if I want a gift, I shall have to plead for it; and, according to the means I employ, the watch is stolen property, my own property or a donation.”

In other words, you cannot seek peace with violence, and you can’t seek justice with injustice, as the result will be interpreted with regard to the manner it was achieved.

In the sense of hunger strikes, the activity can be taken as a Satyagraha-style action as it can be argued that the striker has rejected liiving in an unacceptable situation by choosing to die instead.  During the Indian independence movement, Jatin Das fasted to death.  Bhagat Singh went 116 days without food (bypassing the world record at the time of 97 days) before the British succumbed. This hunger strike made him a world celebrity.

Prior to this, hunger strikes were an essential part of the suffrage movement. British suffragette Marion Dunlop — who was charged with militancy for throwing stones at the windows of 10 Downing Street in 1909 — was released due to her hunger strike because the British government didn’t want to martyrize her. Prior to the passage of the Nineteenth Amendment, Alice Paul and a group of American suffragettes endured force feedings while under detention in Virginia. Hunger strikes were also prominent among the Irish Republicans, in which as many as 8,000 imprisoned members of the Irish Republican Army went on a hunger strike to protest their detention by the Irish Free State. The death of two men — Denny Barry and Andrew O’Sullivan — convinced organizers to call of the strike.

Major hunger strikes have also occurred among Cuban dissidents, in India, and even in Canada — where Chief Theresa Spence of the Attawapiskat First Nation has been on a hunger strike since December 11, 2012 in response of the lack of attention to many First Nation issues, including Bill C-45 — which is seen to be a direct strike against the First Nations’ right of self-governance. On May 29, Khadija al-Mousawi ended his 110-day hunger strike voluntarily after the Bahraini government released Nabeel Rajab — the head of the Bahrain Centre for Human Rights — from custody.

From February to May 2012, approximately 1,800 Palestinian prisoners held in Israeli prisons engaged in a mass hunger strike in protest of the practice of administrative detention. The strike ended when Israel agreed to improve prison conditions and limit administrative detentions to six months if the prisoners agreed not to engage in military recruitment in the prison.

A person needs about 1,200 calories per day to maintain proper organ function and to facilitate healing. On top of that, a person needs an additional 400 calories to power everyday activities such as walking, talking, eating and grooming.

Without these calories, the body must find a substitute. For the first three days without food, the body will consume the free glucose in your bloodstream, as well as dissolved glucose stored in fat reserves. After the glucose reserve is gone, the liver will start ketosis, or the conversion of body fat into glycogen (the animal equivalent to starch), as a means of survival. After three weeks of this — in an average, healthy human — the glycogen potential of the fat tissues will no longer be adequate for conversion. At that point, the body enters “starvation mode,” in which the body actively harvests proteins and fats from muscles, vital organs and bone marrow for conversion into glucose.

It is from the tissue decomposition that most strikers die from.

Prior to 1991, it was both legal and ethical to force feed a hunger striker. Article 6 of the 1975 World Medical Association’s Declaration of Tokyo states that, “Where a prisoner refuses nourishment and is considered by the physician as capable of forming an unimpaired and rational judgment concerning the consequences of such a voluntary refusal of nourishment, he or she shall not be fed artificially. The decision as to the capacity of the prisoner to form such a judgment should be confirmed by at least one other independent physician. The consequences of the refusal of nourishment shall be explained by the physician to the prisoner.” The World Medical Association revised its stance in the 1991 Declaration of Malta on Hunger Strikers, which states that “Forcible feeding is never ethically acceptable. Even if intended to benefit, feeding accompanied by threats, coercion, force or use of physical restraints is a form of inhuman and degrading treatment. Equally unacceptable is the forced feeding of some detainees in order to intimidate or coerce other hunger strikers to stop fasting.”

Most modern day hunger strikes end with the striker being force fed, which is recognized as a human rights violation.

As addressed in a recent Truthout article, the media has, more or less, lost interest in hunger strikes. Khaled Waleed, the operations coordinator for the UFree Network — which is the advocate for Palestinian prisoners in the European Union — believes that media coverage isn’t typically what compels Israel to act. Criticism of the government’s actions in the media can be construed as anti-Israel bias and otherwise ignored or discounted.

Waleed believes that hunger strikes are effective because, by applying pressure, it can influence the government to act.

A bigger problem, however, is the idea that these hunger strikes have to compete with other world events for attention.  In light of the presidential elections or the pending debt limit crisis, a hunger strike on the other side of the world doesn’t seem so important.

According to Truthout, “Although the PA managed to gain enough support to win observer status in the United Nations last month, the international ‘bandwidth’ is just not sufficient to accommodate a host of other issues — especially those that require sustained attention — without a very focused, sustained campaign.”

“Even in the Palestinian Territories, where ‘solidarity tents’ in support of the hunger strikers were constant and vocal for Khader Adnan and the others, there is only intermittent activity this time around. ‘I think people are just exhausted with the whole situation,’ admits Malaka Mohammed, a young activist in Gaza who has been at the forefront of the protest movement there, and helped organize a solidarity rally on Dec. 13. ‘It’s hard to stay active on everything, especially after Israel’s latest attack on Gaza.’”

Despite this, it is essential to recognize the sacrifices one would make to be heard. Al-Issawi has no illusion that his protest may cost him his life. “I hope this model will spread and many similar villages will be created around Palestine. I hope to see Bab Al Muhabeh (the gate of love) Bab Al Huriya (the gate of freedom) and Bab Al Salam (the gate of peace),” he said to his supporters in a message he sent and which was published on the International Solidarity Movement website.

“I will join you all on the outside soon.”