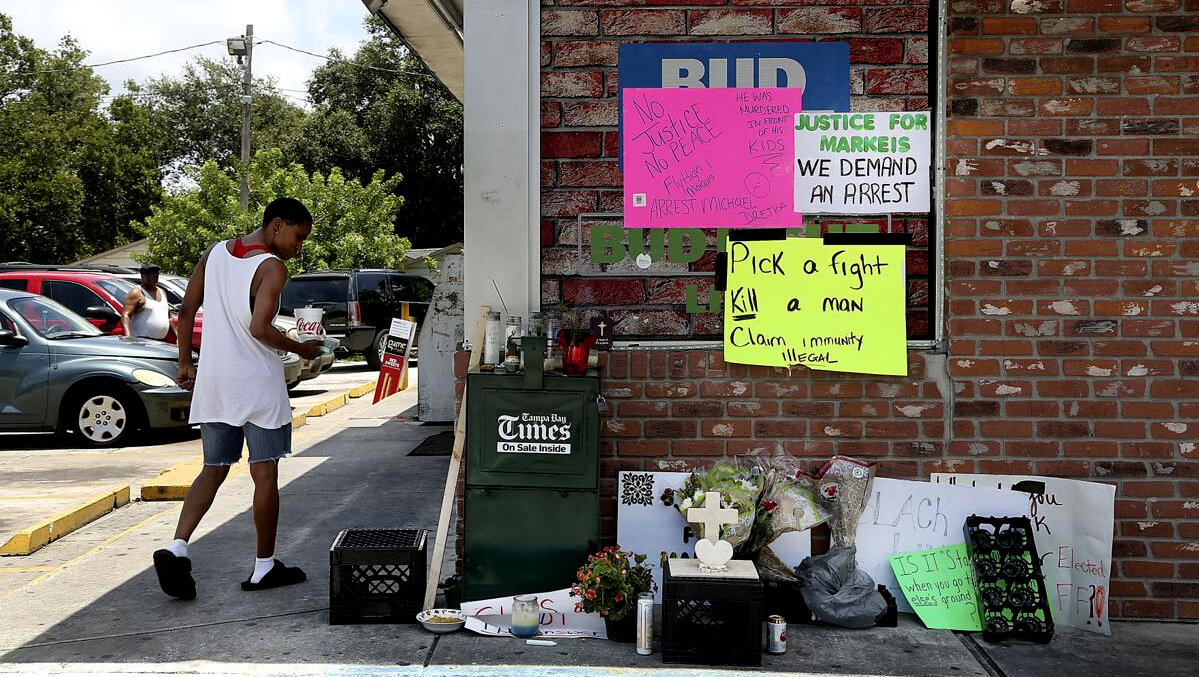 CLEARWATER, FLORIDA — To better understand the depraved heart of America’s racist justice system, take a moment to unbundle the “Stand Your Ground” statute that is the legal basis for a Florida sheriff’s announcement last week that he would not file criminal charges against a white vigilante who fatally shot an unarmed black man during a scuffle over a parking spot. Florida was the first of 33 states in the U.S. to override bedrock legal principles that date back to 17th-century British common law, by enacting Stand Your Ground legislation that is, for all intents and purposes, a license to kill.

Twenty-eight-year-old Markeis McGlockton and his 5-year-old son were in the Circle A Food Store in Clearwater, Florida, last Thursday when Michael Drejka confronted the driver of the car — McGlockton’s partner, Brittany Jacobs — who was in the car with the couple’s other kids. Drejka, 47, and Jacobs began arguing over whether the car was illegally parked in a handicapped space when McGlockton exited the store, saw his partner engaged in a heated argument, and protectively shoved Drejka to the ground. Witnesses saw, and surveillance videos clearly show, McGlockton beginning to back away when Drejka pulled out a gun and shot the younger man once in the chest.

Citing Florida’s Stand Your Ground law, Pinellas County Sheriff Bob Gualtieri said at a news conference Friday that he would not pursue criminal charges against Drejka.

A nation-sweeping expansion of the right to kill

In 2005, state lawmakers passed Stand Your Ground legislation, which effectively rewrote the state’s justifiable-homicide statute, overturning a longstanding precept of American criminal law that anyone claiming self-defense has a “duty to retreat” before resorting to lethal force. Moreover, self-defense requires that the response must be proportional to the imminent threat, meaning that you can’t open fire on someone for kicking you in the shin.

The relevant point is this: absent Florida’s Stand Your Ground Law, a prosecutor would have almost certainly been compelled to charge Drejka, with the killing of McGlockton. While McGlockton may have been guilty of a misdemeanor assault for shoving Drejka, he immediately retreated and posed no further danger. Witnesses noted and the surveillance video shows that Drejka at no point assumed a defensive posture.

“He wanted somebody to be angry at. He just wanted someone to fight him,” He was picking a fight. I’m just sitting, waiting for my family to come back to the car.”

Said one black, Washington D.C.-area former prosecutor upon seeing the videotape: “He [Drejka] brought a gun to a fistfight.”

Clearwater is a suburb of Tampa, roughly 132 miles southwest of Sanford, the Orlando suburb where five years ago this month, another white vigilante, George Zimmerman, was acquitted by a jury of fatally shooting an unarmed teenage African-American boy, Trayvon Martin.

The legal principle requiring that a claimant demonstrate a defensive posture before using lethal force dates back to the early 1600s. The Castle Doctrine, however — a man’s home is his castle — provides an exemption in the case of an intruder or burglar. Stand Your Ground laws expand the legal justification for lethal self-defense and, while prosecutors have broad discretion to apply the law.

In fact, a 2010 study by Texas A&M University economics professor Mark Hoekstra and research assistant Cheng Cheng found that Stand Your Ground laws actually increased the homicide rates in the 22 states that had passed such legislation at the time, by an average of 8 percent.

The prospect of facing additional self-defense does not deter crime, We find no evidence of deterrence effects on burglary, robbery, or aggravated assault … In contrast, we find significant evidence that the laws increase homicides. It is clear that the primary impact of these laws, beyond giving potential victims additional scope to protect themselves, is to increase the loss of human life.”

Black and brown life especially, said the D.C.-area former prosecutor, who spoke on condition of anonymity because he is managing an election campaign and does not want his views to be conflated with those of his client. It is telling, he said, that a majority of states in the U.S. have passed Stand Your Ground legislation over a period when violent crime, nationwide, is declining:

I think that the architects of these laws took a look at the changing demographics and wanted a weapon to protect themselves from the Black and Latino menace.”

A 2015 study of Florida’s Stand Your Ground Law by a researcher at St. Louis University found evidence of racial bias. A statistical analysis of 204 cases between 2005 and 2013 found “disturbing” proof that “there indeed is a quantifiable racial component in the impact of the SYG law in Florida; namely, a suspect is twice as likely to be convicted of a crime if the victim is White, compared to when that victim is not White.” The article compares its findings to a civil rights-era study that similarly found “strict enforcement for crimes when the victim is White and less rigorous enforcement when the victim is non-White.”

Historians, writers and filmmakers have noted the intimate relationship between guns and depictions of the black boogeyman. The historian John Hope Franklin wrote:

Even before the war white Southerners had frequently entertained a wild nightmarish fear that the slaves would rise up, slay them, and overthrow the institution of slavery. It had happened in Haiti. Perhaps it would happen here. In 1865 Southern whites “knew” that there was nothing to hold back the tide. Wild rumors flashed through the South that the freedmen would strike in vengeance. Some whites were even certain of the date. It would be New Year’s Day 1866, they said. How could they keep their minds on rebuilding when their former slaves were poised to complete the destruction?”

A white officer responding to the 1966 sniper attack at the University of Texas at Austin that left 16 dead said that his first thought was that the Black Panthers were responsible for the attack, which was in fact carried out by a mentally-disturbed white U.S. marine; and documentarians note that the two white teenagers responsible for the 1999 massacre at Columbine High School in Colorado took particular relish in fatally shooting one of their few black classmates.

In her 2017 book Stand Your Ground: A History of America’s Love Affair With Lethal Defense, author Caroline Light wrote:

But as the Black Lives Matter and #SayHerName movements are teaching us now, our current insecurities will not be mitigated by endowing more citizens with the right to shoot first, and ask questions later. Indeed, eliminating gun restrictions and the duty to retreat has only intensified the violence against our nation’s most vulnerable citizens. It should not surprise us that SYG laws and more liberal gun-carry laws — in spite of their ostensibly race-neutral framing — continue to place people of color outside of our nation’s protective boundaries. The deliberate misidentification of criminality and vulnerability is embedded in our very ideals of citizenship.”

An African-American truck driver told reporters in Florida that he encountered Drejka in the same convenience store parking lot where last week’s slaying occurred, when he parked in the handicapped space while ducking in to quickly buy a beverage. “He flipped out on me called me every n-word, said he’s going to shoot me,” said the driver, Richard Kelly. “He said he was going to kill me, and he went back to his truck, got something out of his truck and walked back up on me.”

Mr. Drejka is a danger to others around him, and Sheriff Gualtieri not arresting him on-sight is a problematic facet of the Stand Your Ground laws — that if the defense is applied, the law enforcement may be at risk for improper arrest. In spite of that, we also request that the sheriff arrest Mr. Drejka for the murder of Mr. McGlockton.”

Top Photo | Tempe Louis, of Clearwater, pauses to observe a memorial on the side of the Circle A Food Mart, in Clearwater, Fla on July 24, 2018. Douglas R. Clifford | Tampa Bay Times via AP