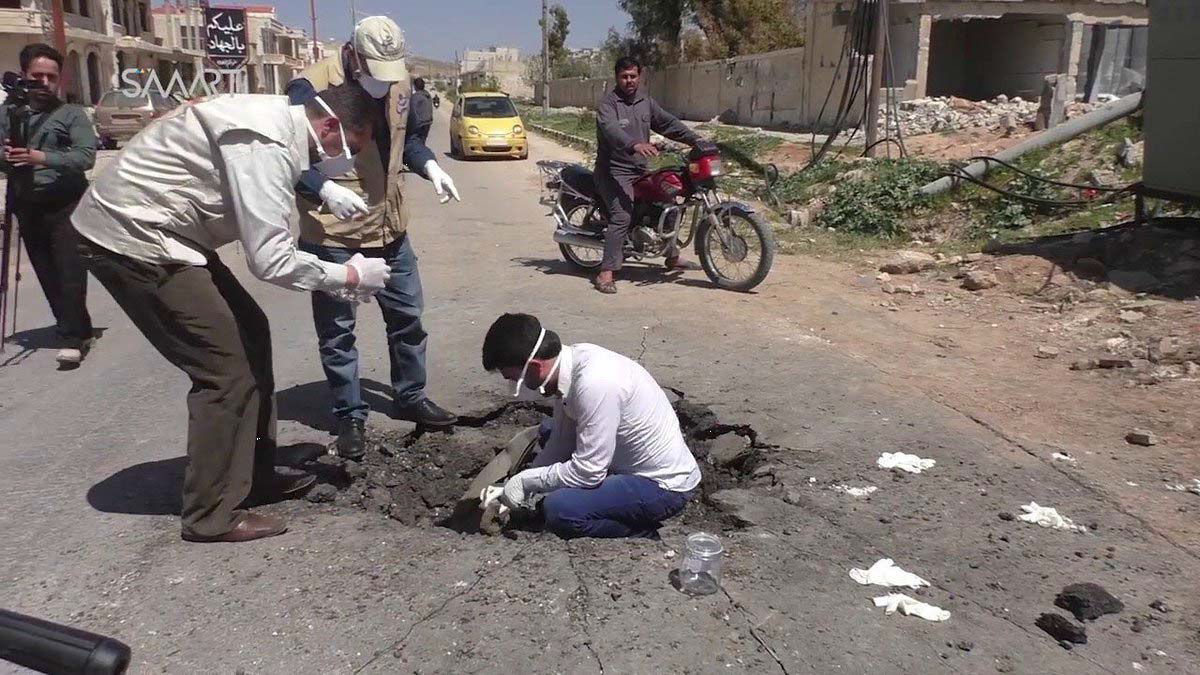 Men in Khan Sheikhoun, Syria, inside a crater where a sarin-gas bomb is alleged to have landed.

What do you call a report based on a chemical attack alleged to have occurred in a specific site, the authors of which refused to even visit the site? One might call it a farce. This is broadly what Russia has said of a report from the Organisation for the Prohibition of Chemical Weapons (OPCW) on the alleged chemical attack in Syria’s Idlib Governorate said to have happened on the 4th of April, 2017.

Unlike the OPCW mission to Syria in 2013, and 2014 which reported that Syria had gotten rid of its entire stock of chimerical weapons, the investigation of the alleged Idlib attack was not conducted by working with any responsible sources on the ground in Syria. Instead, it relied on terrorist produced videos which have been largely discredited in addition to the testimony of individuals in Turkey who in many cases were working for the Turkish government and handling alleged chemical samples of an unverified or unknown origin.

“It was the United States-led Western group of countries that came forward with the initiative of this meeting. As it turned out their purpose was to make some noises about the culpability of the Syrian government and President Assad personally in the tragedy of the use of chemical weapons in the Khan Shaykhun region on April 4”.

He also said that the OPCW did not have a “mandate to attribute the responsibility, the United States and their allies did not hesitate to interpret the results of the report, the fact-finding report, as a one hundred percent proof of the guilt of the Syrian government and President Assad in this tragedy”.

“The main problem was that the fact-finding mission has not visited either Khan Shaykhun, the alleged place of the usage of the chemical weapons, or Shayrat Air Base, from where, according to our American partners, the Syrian planes had taken off to carry out this chemical attack.

…There are many omissions or gaps in the text of the report itself. We pointed out to some of them, the experts admitted they did not implement entirely a chain of custody, a basic procedure established by the organization to collect samples to ensure their custody.

And now we see that it was the wrong decision, because on June 26, (our)American partners… made statements according to intelligence data, that there allegedly are some kind of preparations on the Syrian side to launch a new attack and this is absolutely not logical”.

Russia had earlier confirmed that no one in the area in or around the site of the alleged attack has come forward to any authority asking for antidotes for exposure to highly toxic sarin gas. This is one of the facts which led the Russian Defence Ministry to conclude that the incident was a staged event rather than an actual attack.

The insufficient nature of the report and the politicized conditions through which it was hastily cobbled together mean that it cannot be understood as having any scientific legitimacy.