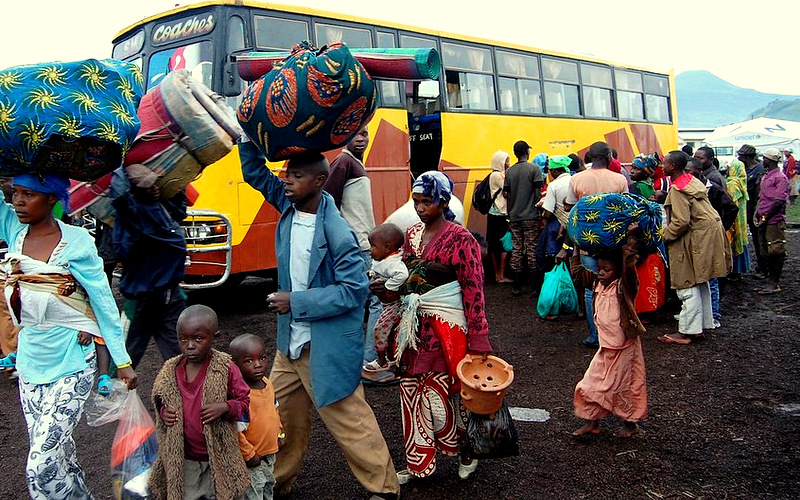 Refugees from conflict in the eastern Democratic Republic of the Congo leave the Nyakabande transit camp in Uganda for an eight hour journey to Rwamwamja refugee settlement, further into southwest Uganda. (Picture: Andy Wheatley/DFID)

LOS ANGELES — Most of the more than 65,500 refugees in the camps of the Adjumani district of northern Uganda survive on two bowls of porridge a day and the United Nations High Commissioner for Refugees has reported severe shortages of water, sanitation and health services.

“Life here is not easy,” David Aliar, a Red Cross volunteer from war-torn South Sudan, told the Guardian. “The food is not enough.”

Mosquito nets are also in short supply at the camps, raising fears of malaria outbreaks. With about 600 people arriving at the reception center from South Sudan every day, relief agencies are stretched to their limit.

But amid all the deprivation and hardship, one refugee at Nyumanzi, the largest of the camps in the Adjumani district, has opened a small drugstore, serving mostly malaria patients. “I buy these drugs,” Elijah Choi, a former lab technician and supervisor at a hospital in South Sudan, told the Observer. “They are not a donation.”

Near Choi’s shop, several women sell unprocessed milk and another refugee operates a tailoring machine, earning up to about $3.85 a day.

According to a new report on refugee economies, such entrepreneurial activity is not all that unusual in the camps of Uganda, which now hosts more than 317,000 refugees from countries including South Sudan, Somalia, Rwanda, the Democratic Republic of Congo, Ethiopia, Kenya and Burundi.

Researchers from the University of Oxford, England, who surveyed 1,593 refugees in Uganda’s Nakivale and Kyangwali settlements and in the country’s capital, Kampala, concluded that their data debunks a number of popular myths about refugees, among them that refugees are economically isolated, are a burden on host states, are technologically illiterate, and depend on humanitarian assistance.

Refugees “buy and sell goods and services not only within Uganda but globally,” Alexander Betts, a co-author of the report and a professor of refugee studies at Oxford, told MintPress News.

In Nakivale, for example, Somali shops stock everything from basic kitchen goods to hard-to-find luxury products such as perfumes and electronics. One trader imports his best-selling item, canned tuna, from Thailand via Dubai and Kenya, using Somali-run trade networks.

The report argues that “the existing paradigm [of refugee assistance] fails to adequately recognize that refugees and other displaced persons have talents, skills, and aspirations. A rethink is urgently needed.” By adopting a new model that encourages refugee economies and self-reliance, it says, host states and aid groups can help free refugees from long-term dependency.

According to Betts, more than two-thirds of refugees and other displaced populations are in so-called “protracted situations,” meaning they have been displaced for more than five years. The average length of stay in a camp is well over a decade.

“This is a human tragedy,” Betts said. “It’s also bad for donors who pour resources into a model based on long-term dependency. With new refugee crises around the world, we cannot afford to consign a whole generation of Syrian young people, for example, to the kinds of long-term protractedness that has been endured by Somalis, Palestinians and others.”

Uganda’s history with refugees dates back to before its independence from Britain, when about 10,000 Polish nationals, mostly women and children, sought sanctuary there during World War II. Conditions for refugees have often been brutal. In 2002, Human Rights Watch reported that refugees in one Kampala neighborhood slept on 10 foam mattresses in a cement room measuring 30-by-30 feet.

“Each mattress belonged to one family,” the report said. “One man with ten children explained that they had to take turns sleeping on their one mattress.”

In 2006, Uganda passed legislation that was seen as a model for Africa. The Refugee Act gave refugees the right to work, freedom of movement and the right to live in settlements rather than in refugee camps.

The law “epitomizes Uganda’s unwavering liberal policy towards refugees who seek protection here until they feel it is safe for them to return to their countries of origin” and would enable refugees to “fend for themselves by growing crops, attain food security and avail themselves of other human basic needs,” then-Prime Minister Apolo Nsibambi said at a World Refugee Day ceremony in June 2009.

According to another recent report by Oxford’s Refugee Studies Centre, “the issue of how to understand and support the livelihoods of refugees has emerged as a pressing agenda due to the large number of protracted refugee situations globally. One of the major difficulties UNHCR faces in prolonged displacement is diminished donor interest in supporting these long-term refugees. As a result, assistance programs for protracted refugee situations have been constantly deprived of adequate funding.”

Betts, who heads the Humanitarian Innovation Project at Oxford, says he and his research team decided to focus on Uganda “precisely because it’s toward the positive end of the spectrum. Our aim was to explore what is possible when refugees are given basic economic freedoms.”

“Although it’s not perfectly implemented, the 2006 Act enshrines self-reliance,” he added. “Many host countries do not even have refugee legislation.”

“There is a lack of research that examines the economic lives of refugees and displaced populations,” the new Oxford report notes. “The limited research that exists is mainly focused on refugee livelihoods or economic impacts on the host state.”

What the researchers found, the report says, was a “refugee community that is nationally and transnationally integrated, contributes in positive ways to the national economy, is economically diverse, uses and creates technology, and is far from uniformly dependent on international assistance.”

The researchers’ observations of daily life “showed refugee settlements functioning as centers of economic gravity, attracting people and capital from all over Uganda and, in turn, playing a crucial role in the agricultural supply chain of the country.”

“Since refugees came in, we have received a number of economic and social benefits from them,” a former executive of the Kyangwali district council told researchers. “School, road, clinic — all improved due to their presence. It is hard to imagine Kyangwali’s economy without the refugees’ presence.”

Betts was particularly surprised by the extent of refugees’ economic networks. “From the cross-border export of maize and sorghum, to the Congolese import of fabrics and jewelry from India and China, to Somalis’ import of tuna from Thailand, refugees are globalized,” he told MintPress.

Another surprise, according to Betts, was that refugees in Uganda create jobs, including for Ugandan nationals. In Kampala, for instance, more than 20 percent of refugees employ others, and of those, some 40 percent are Ugandans.

The report devotes considerable space to the technological literacy of refugees, noting, among other things, that roughly 70 percent of rural refugees regularly use mobile phones to communicate, even though, due to limited access, Internet use is only available to around 10 percent.

In Nakivale, one Somali refugee operates a computer game business, charging a small fee for the use of games that he purchases on trips to nearby towns. The games are played on television sets he buys used in the settlement.

Nakivale also offers an Internet cafe. Demou-Kay, a young Congolese refugee, works there every day on a laptop computer, using the Internet connection to edit videos. He constructed a radio transmitter out of used electrical parts and a mobile phone and runs the settlement’s only radio station, generating income by charging a small fee for song requests.

Refugees “innovate and use technology in their daily lives,” the report says. “Facilitating this form of ‘bottom-up’ innovation may offer a non-traditional way of enhancing refugees’ own capacity to develop sustainable opportunities.”

The report recommends that refugees’ skills and talents be nurtured through education, skills development, access to microcredit and financial markets, business incubation, and improved Internet access.

Understanding the economic systems of refugees, the researchers argue, “may hold the key to rethinking our entire approach to refugee assistance.”

Betts admits there is a risk that if refugees fend for themselves, that might lead to donors prematurely withdrawing assistance — which has happened in Uganda. But he is not “arguing for a withdrawal of assistance or suggesting that international protection is not crucial.”

“We are simply suggesting,” Betts explained, “that [aid] needs to be supplemented by an approach that recognizes and nurtures refugees’ skills, talents, and aspirations.”