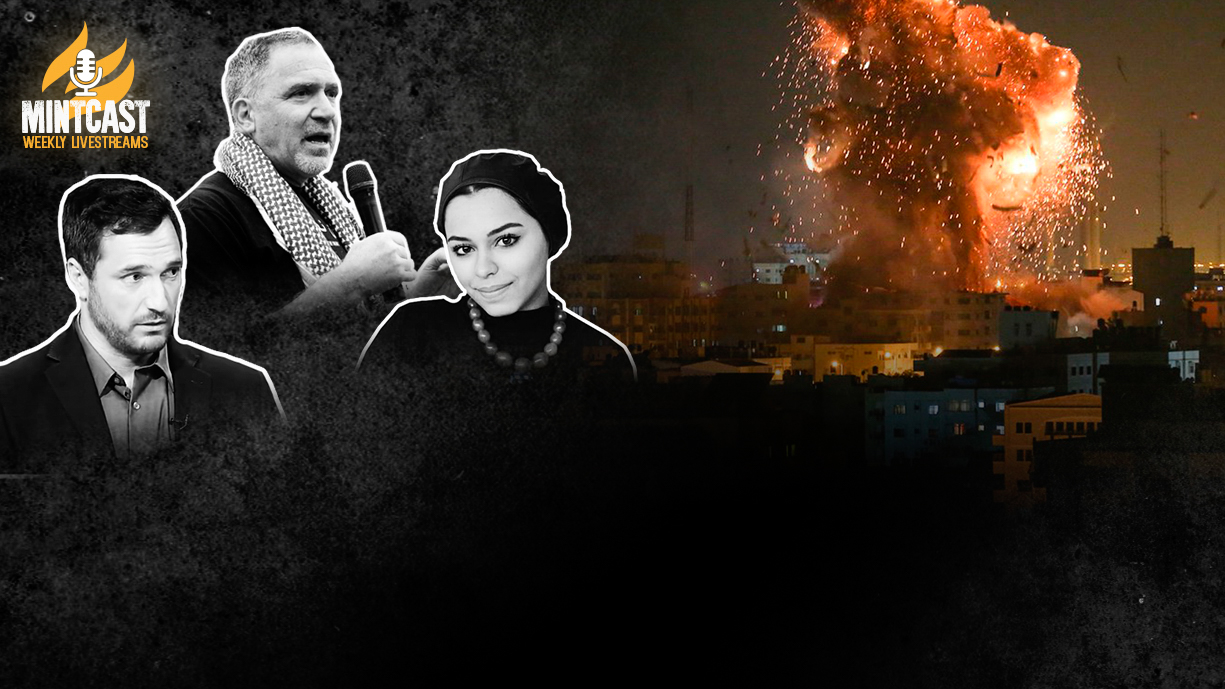 Welcome to MintCast, the official MintPress podcast featuring dissenting voices the establishment would rather silence. I’m your host Mnar Adley.

Israel’s latest attack on Palestine has captured the world’s attention. On Saturday, the Israeli military attacked the Shati Refugee Camp in Gaza, killing 10 people, including eight children. The same day, Israeli missiles hit a high-rise building housing the headquarters of Al-Jazeera and the Associated Press. On Sunday, Israeli strikes killed at least 42 people, bringing the death toll to over 200, including 50 children. All of these actions amount to war crimes.

Although the roots of the conflict can be traced back to at least Israel’s founding in 1948, the current violence was sparked off on May 7, when Israeli forces stormed Jerusalem’s Al-Aqsa Mosque, the third holiest site in Islam. Worshippers celebrating Ramadan were met with tear gas, rubber bullets and stun grenades, with more than 300 injuries reported.

Far-right Israeli groups celebrated the damage to the mosque, and inside Israel, armed groups continue to harass and beat up non-Jews.

In response, Hamas has fired rockets into Israel, with the Israeli government reporting at least 10 deaths as a result.

Despite the violence, the U.S. government has stood firmly behind its ally in the Middle East, with President Biden stating that “Israel has a right to defend itself when you have thousands of rockets flying into your territory,” while his administration has repeatedly blocked any coordinated United Nations efforts to respond. The Biden administration even approved a $735 million arms deal with Israel amid its massacre in Gaza.

Palestinians, however, see the conflict not as Israel defending itself, but an onslaught against a civilian population trapped inside the world’s largest open-air prison.

Israel continues to attack not only houses but also the infrastructure in the Gaza Strip, continues to attack the limited economic resources of Gaza, hitting small factories and small companies, which means that the outcome of this continuous attack will be seen later on in more poverty, more unemployment and a collapsing government– in particular the health and social affairs sectors. Therefore, this aggression is not targeting (as Israel says) military compounds, but the whole life of Palestinians– the souls of innocent civilians– as a way to break down the will of Palestinians and the raise the price paid by the Palestinian people who are supporting and embracing the resistance,” Basem Naim, the former Minister for Health for Gaza told MintPress.

Malak Mattar is an artist from the Gaza Strip who began painting in 2014 as a response to Operation Cast Lead: the Israeli assault on Gaza. Today, she is known worldwide for expressionist paintings and abstract designs and her work has been displayed across Europe, Asia, the U.S. and Latin America.

Dan Cohen is my partner at “Behind the Headlines,” a new viewer-supported investigative journalism series. A Jewish-American journalist, Dan is an expert in Israel-Palestinian politics. He produced and released the documentary “Killing Gaza,” about the 2014 Israeli attack on the densely populated strip.

Miko Peled is an author, journalist and human rights activist from Jerusalem. His latest article, “Israel’s Pogroms in Jerusalem Could Spark the Destruction of al-Aqsa,” can be found at MintPress News.

Subscribe to MintCast on Spotify, iTunes, and Sound Cloud.