WASHINGTON — (Opinion) There has been a remarkable turn of events recently when it comes to the Trans-Pacific Partnership and its European equivalent, the Trans-Atlantic Trade and Investment Partnership. They are faltering and moving in a downward spiral, if the movement keeps doing its job this will continue for the duration of the Obama presidency.

The people-powered movement against trade, the largest anti-corporate trade movement in history, has built its power over the last five years. The movement grew tremendously and flexed its muscles over the last year of the campaign trying to stop “fast-track” trade authority, which barely squeaked through Congress last spring. In this election year, politicians recognize TPP stands for “Toxic Political Poison” and fear voting on it in 2016.

It is time for us to recognize the power the people have built and use it to not only finish off the TPP and TTIP, but to also set a new direction in trade policy. Trade needs to serve people and the planet, not just corporate profits. Trade needs to shrink the power of transnational corporations and oligarchs, build democracy and transparency, and shrink the wealth divide. Trade has to ameliorate the crises of climate injustice, economic injustice and weakened democracy, not make them worse.

Trade has been President Barack Obama’s top economic agenda item ever since he was given fast-track trade authority by Congress. But that was a very costly victory for him and former Speaker of the House John Boehner. 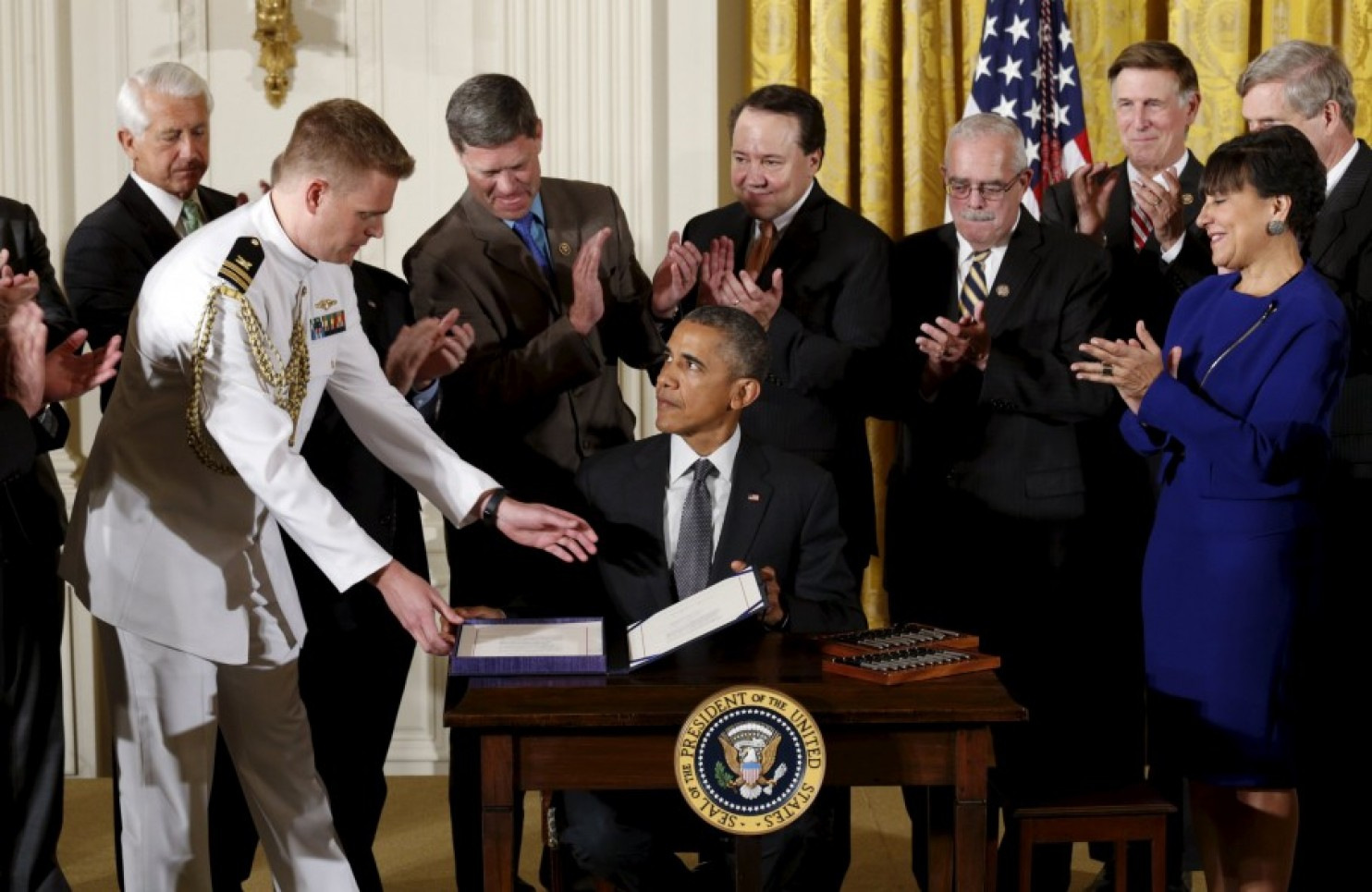 Surrounded by Cabinet officials and members of Congress, President Barack Obama signs H.R. 2146, which sandwiched in other measures, provided a ‘fast track’ to implementing the TPP. (AP Photo/Carolyn Kaster)

First, in order to eke out a legislative victory, Obama and his shrinking number of allies in Congress had to compromise and make the TPP public for 90 days before it was signed. Originally, the trade negotiators planned to keep the TPP secret for four years after it was signed. This has been a costly compromise, as people now know what is in the agreement and the U.S. trade representative and the president can no longer deny it.

Second, the Toxic Political Poison of the TPP ended the career of Boehner, a long-time corporate trader. In order to get the agreement through the House he had to twist the arms of dozens of Republicans who opposed fast track. And, after the vote, he sought retribution against the leaders of the revolt against fast track by removing them from committees and leadership positions. This led to a counter-revolt that ultimately ended his political career. When a speaker of the house is defeated over an issue, everyone in Congress will step lightly to avoid that political poison.

The first was former Secretary of State Hillary Clinton, who was part of the administration while it negotiated the agreement and repeatedly praised the TPP. Faced with a populist rival in the presidential primaries, she saw the reality of the politics of the TPP. Clinton spends millions of dollars on polling and focus groups, so she knew she could not endorse the TPP. She dodged the issue for as long as she could, but then came out against the agreement in October, saying it was just not good enough from what she has learned about it so far (note the wiggle room).

On the Republican side, the pro-corporate trade senator from Ohio, Rob Portman, came out against the TPP just last week. Portman was a major switch, since under the Bush administration he served as the U.S. trade ambassador, the head of the office of the U.S. trade representative. Portman is facing a difficult re-election against former Ohio Gov. Ted Strickland, who has always opposed corporate trade agreements. Portman put his finger to the political wind and realized his political career was probably over if he supported the toxic TPP.

When two powerful political figures like this come out against the TPP because of fear for their political lives, every member of Congress notices. Both these switches came about because the movement of movements against corporate trade has educated and mobilized enough people to make support for corporate trade a risk to all political careers.

This is also having an effect on the leadership of both houses of Congress. In the Senate, Mitch McConnell has been the most consistently clear. Since before last month’s State of the Union address he has said that he does not think the TPP should be considered before the elections. Obama’s reaction was that Sen. McConnell’s views would not be a factor in the decision-making schedule.

Prior to the State of the Union, Obama had planned to make a major push for the TPP, but by the time of the speech it was whittled down to a brief 28-second, three-line mention. Obama met with Speaker of the House Paul Ryan earlier this month, and then Sen. McConnell joined the conversation. In the end, they could not determine a schedule for the TPP. McConnell threw cold water on Obama’s desire to sign the TPP during his presidency, pointing out that many of the leading contenders for president opposed the TPP. The only thing they could agree on was to keep talking.

The administration pushed forward on the TPP with a signing ceremony on Feb. 4 at a gambling casino in New Zealand. But the people-powered movement was ready. Protests began in Washington before the agreement was signed, and actions spread nationwide and into six other countries. The media reports did not show glorious images of the ceremony but anger in the streets of Auckland, where roads and bridges were shut down.

In the United States, there were protests held in about 40 cities. Supporters of the TPP face significant and growing opposition everywhere. At the same time, economic reports are finding negative impacts on the economy; even the World Bank predicted as little as a 0.4 percent economic increase in GDP by 2030 as a result of the TPP. And the budget just submitted by Obama says the Trans Pacific Partnership would increase the deficit by $28 billion over the next decade.

On Feb. 9, Rep. Ryan told The Racine Journal Times that there is bipartisan skepticism of the agreement. He said that if Obama pushed a vote on the TPP he would lose, adding: “There are enough concerns about this agreement, some that I also have, where I don’t see enough support for it right now.” This was the first time Ryan admitted there was not enough support for the agreement. At the same time, the White House moved from saying Sen. McConnell will not dictate the schedule to saying the administration will not go forward without congressional leadership.

People are calling Congress to urge their representatives not to support the TPP, and protests are being planned for mid-February when representatives are home for the president’s week recess. We all know that Obama and the transnational corporations want these agreements, so we need to continue to build our people power to defeat the TPP.

Europe says ‘No’ to the TTIP

It is not only the TPP that is having trouble; the European agreement, the TTIP, is, too.

President Obama wants to complete negotiations while he is still in office. On Monday, Obama met with the president of Italy and at the press conference was pushing to have the TTIP completed while he was in office, warning that if it is not completed it may drift away and never be completed. But, on the same day, Inside Trade reported: “White House Press Secretary Josh Earnest on Monday (Feb. 8) said that although the Transatlantic Trade and Investment Partnership (TTIP) is a priority for the Obama administration, he does not envision the deal wrapping up while President Obama is in office.” The president and his spokesperson seem to have gotten their signals crossed in their public comments on the same day — perhaps they have not adjusted to the new reality that TTIP will very likely not be completed while Obama is in office. In October there were protests in Europe opposing the TTIP. Hundreds of thousands protested in Berlin, reportedly surprising Chancellor Andrea Merkel. People know the TTIP is a threat to climate change with no climate solution possible under the TTIP. The TTIP poses many risks with very little economic benefit. It is a threat to public services, including Europe’s excellent health systems, and a threat to the environment and food safety. It’s an agreement made based on secret deals between corporations and governments. It’s just a bad deal on many fronts.

Negotiations have been faltering as Europeans recoil against U.S. persistence in taking too hard of a line in favor of policies that protect corporate profits at the expense of public health and safety. France has repeatedly threatened to leave the deal, which would mean the end of it, since unanimity is required among EU nations for the TTIP to proceed.

The protection of “investors,” i.e., transnational corporations, through trade courts is even more controversial in Europe than in the U.S. Forty-four judicial organizations have been critical of the investment courts as having no legal basis. And this month, German judges ruled against the courts as being illegal.

Call Congress and urge them to oppose TPP

With these agreements struggling, we have a great opportunity to stop them completely. If we continue to build pressure on members of Congress from now through the elections, we are likely to prevent Congress from voting on the TPP this year. It is important that they don’t try to sneak the TPP through during the lame-duck session between the elections and the winter break in December. We do this by making the breadth of opposition visible through meetings with members of Congress and actions in the street.

Then, we need to face the next president and tell him or her that trade agreements designed for corporate interests will never become law again. The people have learned from the World Trade Organization, North American Free Trade Agreement and other agreements that they never serve the people’s interests, never protect the planet or grow the economy in a fair way. These agreements consistently lead to a global race to the bottom in wages and workers’ rights, degrade the environment and expand inequality. They actually make the crisis situations we face worse.

In addition to stopping corporate-rigged trade agreements, the task of the movement in 2017 is to put forward a new form of trade. The process needs to be open and transparent; the goals need to be to reduce inequality, raise wages, and protect the environment. It is time for the people-powered movement to end the era of rigging trade for transnational corporations and oligarchs. The movement is building its power to create the trade agenda we need. Let’s keep up the great work, end the era of corporate-rigged trade, and enter a new enlightened era of trade to benefit people and the planet.

Kevin Zeese and Margaret Flowers co-direct Popular Resistance, whose campaign against the TPP is Flush The TPP.