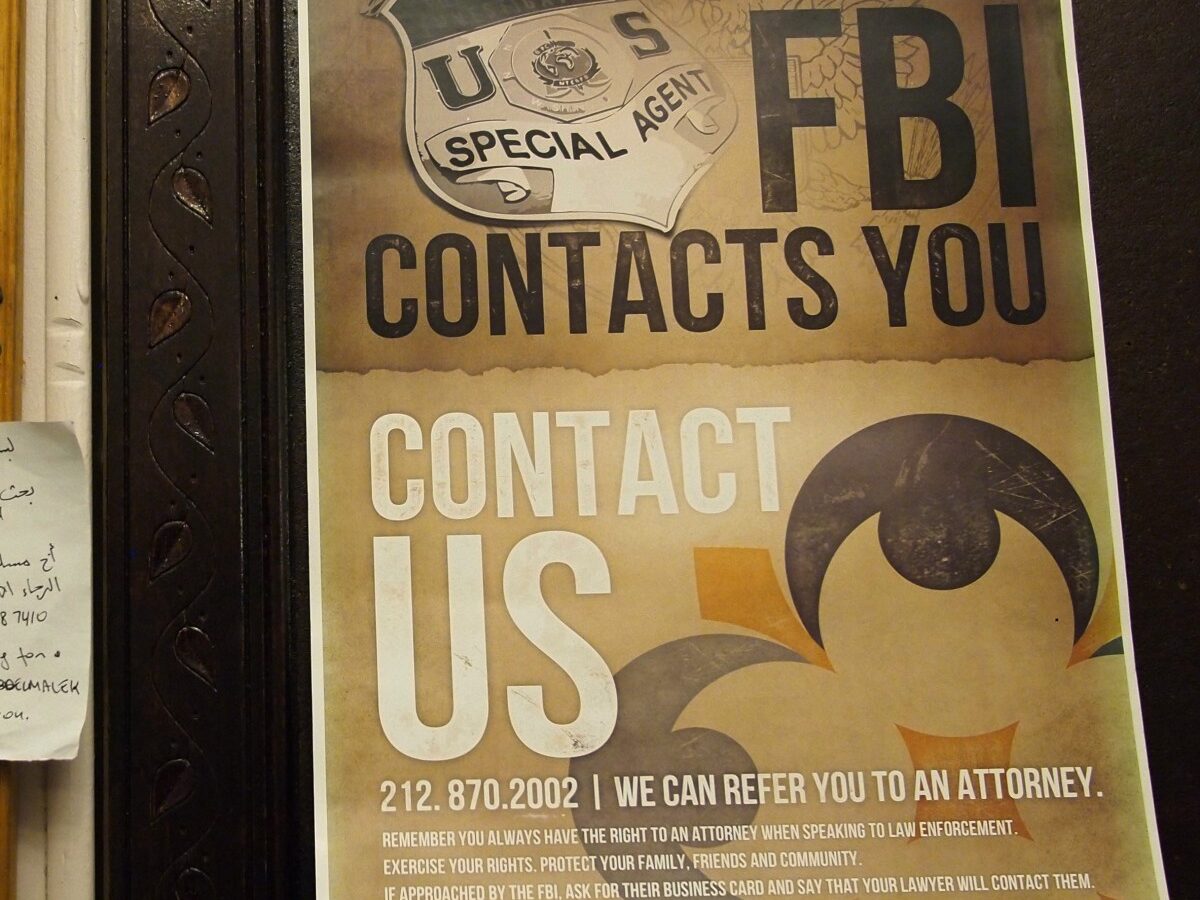 “We need you to pretend to be one of them. It’s street theater.” — NYPD to 19-year old Shamiur Rahman, police informant, on his work in Muslim communities (NEW YORK) MintPress – Bengali native Rahman says he was ordered by the New York police to go undercover “creating” and capturing terrorist suspects by befriending Muslims and discussing jihad with them. […]

Flyers are posted on a wall outside of the prayer room at the Islamic Culture Center in Newark, N.J., Wednesday, Feb. 15, 2012. (AP Photo/Charles Dharapak)

“We need you to pretend to be one of them. It’s street theater.” — NYPD to 19-year old Shamiur Rahman, police informant, on his work in Muslim communities

(NEW YORK) MintPress – Bengali native Rahman says he was ordered by the New York police to go undercover “creating” and capturing terrorist suspects by befriending Muslims and discussing jihad with them.

He told the Associated Press that in exchange for being an undercover informant, the NYPD would pay him $1,000 a month and let him off for possession of marijuana for which he would have otherwise been charged.

Rahman worked for the police by studying Islam, surveilling mosques and Islamic study groups, and talking to Muslims – all while secretly taking pictures and recording conversations.

He told reporters he was an NYPD “mosque crawler,” spying on local imams and documenting those who attended sermons by taking pictures of sign-in sheets.

Rahman said he spied on “everything and anyone” without receiving much training, and he reported everything back to his NYPD handlers.

Initially, he said he felt like a hero for helping the police and he tried to impress his bosses – sometimes by sensationalizing statements made by Muslims by taking them out of context. He called it part of “playing the game” to make more money.

But after several months of working for the NYPD, Rahman said he no longer wanted to spy on his friends. He did not witness any criminal activity, but instead saw Muslims helping needy people.

Once he noticed another NYPD informant spying on him, he quit the job. Now, Rahman believes the work he did was “detrimental to the Constitution.”

“I hated that I was using people to make money,” he said. “I made a mistake.”

This latest revelation compounds the already heavy criticism of the NYPD for claiming such spy tactics are necessary to prevent terrorism.

The NYPD has defended its actions, saying terrorists have “attempted to kill New Yorkers in 14 different plots.” Mayor Michael Bloomberg has bolstered that claim, saying earlier this year, “We have the best police department in the world and I think they show that every single day and we have stopped 14 attacks since 9/11, fortunately without anyone dying.”

But critics maintain that figure is largely exaggerated. A review of the list by the independent news organization ProPublica shows that it overstates both the total amount of serious, developed terrorist plots against New York and the NYPD’s role in stopping the attacks.

According to ProPublica, the list includes at most three definitive terrorist plots, including the failed attempt to bomb Times Square by Pakistani-American Faisal Shahzad in May 2010.

But, it maintains, “The plot was widely seen as a law enforcement failure, as Shahzad was able to plant the rigged car in Times Square without being on the radar of the NYPD and other agencies.”

Similarly, the thwarted 2009 plot by three former high school classmates from Queens to set off bombs in the subway system was “uncovered not by the NYPD, but rather by an email intercepted by U.S. intelligence.”

Finally, in regards to the August 2006 arrests of a group of men later charged with plotting to use liquid explosives to blow up planes bound for North American from London, ProPublica said that although one of the men had a memory stick containing information on flights bound for several cities, including New York, the plan was to blow up the planes over the ocean.

In addition, it found, “The NYPD was not involved in thwarting the plot.

“Of the other 11 cases, there are three in which government informants played a significant or dominant role; four cases whose credibility or seriousness has been questioned by law enforcement officials; and another four cases in which an idea for a plot was abandoned or not pursued beyond discussion,” it concluded.

Another investigation by Mother Jones and the Investigative Reporting Program at the University of California-Berkeley found that out of 508 domestic terrorism cases, nearly half involved the use of informants who were paid as much as $100,000 per assignment.

Faiza Patel, co-director of the Liberty and National Security Program at NYU’s Brennan Center for Justice, maintains the program is potentially against the law.

“Selecting neighborhoods for infiltration and surveillance as the NYPD has done is, at bottom, ethnic or religious profiling,” she asserted. “Such discrimination runs afoul of our nation’s commitment to ‘liberty and justice for all.’ To the extent that the NYPD is monitoring the exercise of Muslims free speech rights and their right to practice their religion, it may also be running afoul of the First Amendment.”

According to Patel, the NYPD’s program is the wrong use of the department’s resources. She said, “New York City has approximately 800,000 thousand Muslims — monitoring all of these people in the hopes of identifying suspicious activity is simply not effective. It would be more effective to build solid relations with the communities so that they would be comfortable reporting suspicious activity to the NYPD.”