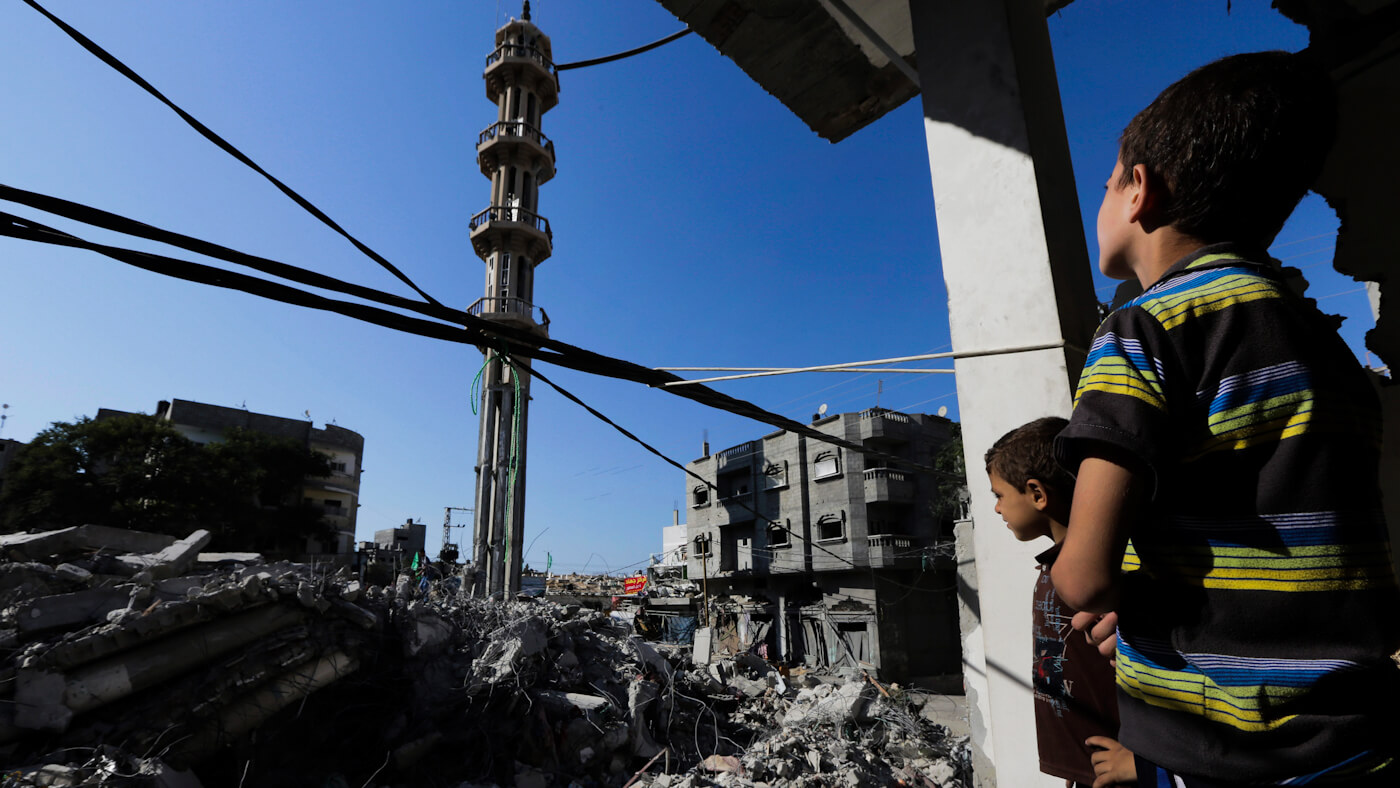 Notre Dame of Gaza: Our Mosques and Churches are Also Burning

The very media that covered the news of the Notre Dame fire seemed oblivious to the obliteration of everything we hold sacred in Palestine as, day after day, Israeli war machinery continues to blow up, bulldoze and desecrate.

As the 300-foot spire of the Notre Dame Cathedral in Paris tragically came tumbling down on live television, my thoughts ventured to Nuseirat Refugee Camp, my childhood home in the Gaza Strip.

Then, also on television, I watched as a small bulldozer hopelessly clawed through the rubble of my neighborhood mosque. I grew up around that mosque. I spent many hours there with my grandfather, Mohammed, a refugee from historic Palestine. Before grandpa became a refugee, he was a young Imam in a small mosque in his long-destroyed village of Beit Daras.

Mohammed and many in his generation took solace in erecting their own mosque in the refugee camp as soon as they arrived to the Gaza Strip in late 1948. The new mosque was first made of hardened mud, but was eventually remade with bricks, and later concrete. He spent much of his time there, and when he died, his old, frail body was taken to the same mosque for a final prayer, before being buried in the adjacent Martyrs Graveyard. When I was still a child, he used to hold my hand as we walked together to the mosque during prayer times. When he aged, and could barely walk, I, in turn, held his hand.

Hundreds of Palestinian houses of worship were targeted by the Israeli military in previous wars, most notably in 2008-9 and 2012. But the 2014 war was the most brutal and most destructive yet. Thousands were killed and more injured. Nothing was immune to Israeli bombs. According to Palestine Liberation Organization records, 63 mosques were completely destroyed and 150 damaged in that war alone, oftentimes with people seeking shelter inside. In the case of my mosque, two bodies were recovered after a long, agonizing search. They had no chance of being rescued. If they survived the deadly explosives, they were crushed by the massive slabs of concrete.

In truth, concrete, cements, bricks and physical structures don’t carry much meaning on their own. We give them meaning. Our collective experiences, our pains, joys, hopes and faith make a house of worship what it is.

Many generations of French Catholics have assigned the Notre Dame Cathedral with its layered meanings and symbolism since the 12th century.

While the fire consumed the oak roof and much of the structure, French citizens and many around the world watched in awe. It is as if the memories, prayers and hopes of a nation that is rooted in time were suddenly revealed, rising, all at once, with the pillars of smoke and fire.

But the very media that covered the news of the Notre Dame fire seemed oblivious to the obliteration of everything we hold sacred in Palestine as, day after day, Israeli war machinery continues to blow up, bulldoze and desecrate.

Palestinians attend prayers beneath the fallen minaret of the Soussi mosque that was hit by Israeli airstrikes in Gaza City, Aug. 8, 2014. Khalil Hamra | AP

It is as if our religions are not worthy of respect, despite the fact that Christianity was born in Palestine. It was there that Jesus roamed the hills and valleys of our historic homeland teaching people about peace, love and justice. Palestine is also central to Islam. Haram al-Sharif, where al-Aqsa Mosque and The Dome of the Rock are kept, is the third holiest site for Muslims everywhere. Yet Christian and Muslim holy sites are besieged, often raided and shut down per military diktats. Moreover, the Israeli army-protected messianic Jewish extremists want to demolish Al-Aqsa and the Israeli government has been digging underneath its foundation for many years.

Although none of this is done in secret; international outrage remains muted. In fact, many find Israel’s actions justified. Some have bought into the ridiculous explanation offered by the Israeli military that bombing mosques is a necessary security measure. Others are motivated by dark religious prophecies of their own.

Palestine, though, is only a microcosm of the whole region. Many of us are familiar with the horrific destruction carried out by fringe militant groups against world cultural heritage in Syria, Iraq and Afghanistan. Most memorable among these are the destruction of Palmyra in Syria, Buddhas of Bamyan in Afghanistan and the Great Mosque of al-Nuri in Mosul.

Nothing, however, can possibly be compared to what the invading US army has done to Iraq. Not only did the invaders desecrate a sovereign country and brutalize her people, they also devastated her culture that goes back to the start of human civilization. Just the immediate aftermath of the invasion alone resulted in the looting of over 15,000 Iraqi antiquities, including the Lady of Warka, also known as the Mona Lisa of Mesopotamia, a Sumerian artifact whose history goes back to 3100 BC.

I had the privilege of seeing many of these artifacts in a visit to the Iraq Museum only a few years before it was looted by US soldiers. At the time, Iraqi curators had all precious pieces hidden in a fortified basement in anticipation of a US bombing campaign. But nothing could prepare the museum for the savagery unleashed by the ground invasion.

An Iraqi policeman stands on the grounds of the Iraqi National Museum where Tens of thousands of artifacts were stolen during the U.S. invasion in 2003. Maya Alleruzzo | AP

Since then, Iraqi culture has largely been reduced to items on the black market of the very western invaders that have torn that country apart. The valiant work of Iraqi cultural warriors and their colleagues around the world has managed to restore some of that stolen dignity, but it will take many years for the cradle of human civilization to redeem its vanquished honor.

Every mosque, every church, every graveyard, every piece of art and every artifact is significant because it is laden with meaning, the meaning bestowed on them by those who have built or sought in them an escape, a moment of solace, hope, faith and peace.

On August 2, 2014, the Israeli army bombed the historic Al-Omari Mosque in northern Gaza. The ancient mosque dates back to the 7th century and has since served as a symbol of resilience and faith for the people of Gaza.

As Notre Dame burned, I thought of Al-Omari too. While the fire at the French cathedral was likely accidental, destroyed Palestinian houses of worship were intentionally targeted. The Israeli culprits are yet to be held accountable.

I also thought of my grandfather, Mohammed, the kindly Imam with the handsome, small white beard. His mosque served as his only escape from a difficult existence, an exile that only ended with his own death.

Feature photo | Palestinian boys look at the rubble of al-Qassam mosque, hit by an Israeli airstrike, as they stand in the bedroom of their destroyed family home in Nusseirat refugee camp in the central Gaza Strip on Aug. 10, 2014. Adel Hana | AP