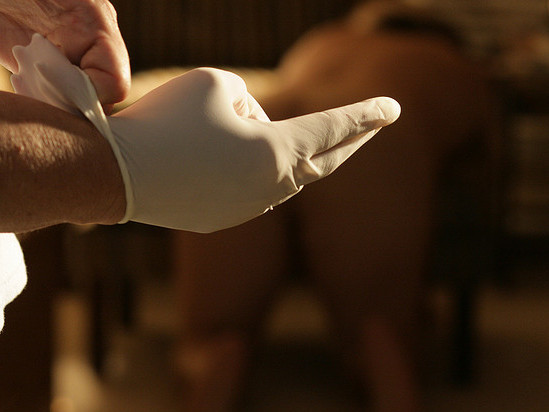 The police didn’t find any narcotics, but that didn’t stop them from charging the slew of medical bills to the suspect anyway.

New Mexico resident David Eckert has filed a federal lawsuit against a local police department and hospital after authorities — suspicious he was hiding narcotics in his anus — conducted a colonoscopy, multiple X-rays, several cavity searches, gave him three enemas without his consent and watched him defecate.

According to the lawsuit, Eckert was driving out of a Wal-Mart in Deming, N.M. — a city about 35 miles from the U.S.-Mexico border — when he was pulled over by officers from the Deming Police Department for failing to fully stop at a parking lot stop sign.

After the drug-sniffing police dog alerted the officer that there may have been illegal drugs on Eckert’s car seat, the officer detained Eckert and obtained a search warrant to search his anus.

Officers drove Eckert to a nearby emergency room, but doctors refused to perform a search, citing ethical concerns since Eckert had not consented. But medical professionals at Gila Regional Medical Center in nearby Silver City didn’t share the same concerns, and although the warrant was only good for Grant County and the medical facility was in Luna County, the doctors agreed to perform a search.

Convinced Eckert was hiding the narcotics, doctors inserted an enema in Eckert’s anus. Eckert was then forced to defecate in front of the doctors and police officers, who searched his stool and found no narcotics.

Doctors gave Eckert another enema and watched him defecate again. Unable to find narcotics, doctors decided to give Eckert one last enema. When they couldn’t find anything, they gave him another X-ray.

Despite the seven different searches doctors had already performed on Eckert, they decided to give him a colonoscopy to check for hidden narcotics. They sedated him and inserted the scope into his anus where they examined his anus, rectum, colon and large intestines.

When doctors couldn’t find anything after the colonoscopy, Eckert was let go, but the medical facility charged all of these procedures to Eckert and have threatened to send a collection agency after him if he doesn’t pay.

In August, Eckert, along with his attorney Shannon Kennedy, filed a lawsuit against the Deming Police Department and the Hidalgo County Sheriff’s Office for unreasonable search and seizure, and is suing various medical employees at the Gila Regional Medical Center for negligence.

“The colonoscopy targeted an area of [Eckert] which is highly personal and private,” the suit said. “The colonoscopy was extremely invasive and a total intrusion of personal privacy, especially as it physically penetrated [Eckert’s] body.

“Throughout the entire of these events, [Eckert] protested and stated he did not want the doctors to examine him.”

Citing ongoing litigation, the Deming Police Department and the Gila Regional Medical Center have declined to comment on the lawsuit. But Deming Police Chief Brandon Gigante said that his officers “follow the law in every aspect.”

Eckert has not spoken to the media, either — only telling his story through his attorney, who says he’s too scared.

“He’s absolutely terrified,” Kennedy said. “He’s living in a community where police are able to harass people traveling through this community and people who live here, basically unchecked.”

This isn’t the first time Eckert has had a run in with the Deming police. According to the lawsuit, in September 2012 Eckert was pulled over for a cracked windshield. The officer had Eckert step out of his vehicle because his hands were shaking and asked him what he was doing prior to being pulled over.

The officer suspected Eckert of having illegal drugs in his car and when Eckert refused to answer the officer’s questions, the officer seized his vehicle without probable cause. A police dog alerted officers that there may be something in his car, but a search found nothing.

Eckert alleges that the officer that pulled him over in this most recent stop didn’t actually witness the rolling stop himself, but was alerted to the traffic violation by a fellow officer.