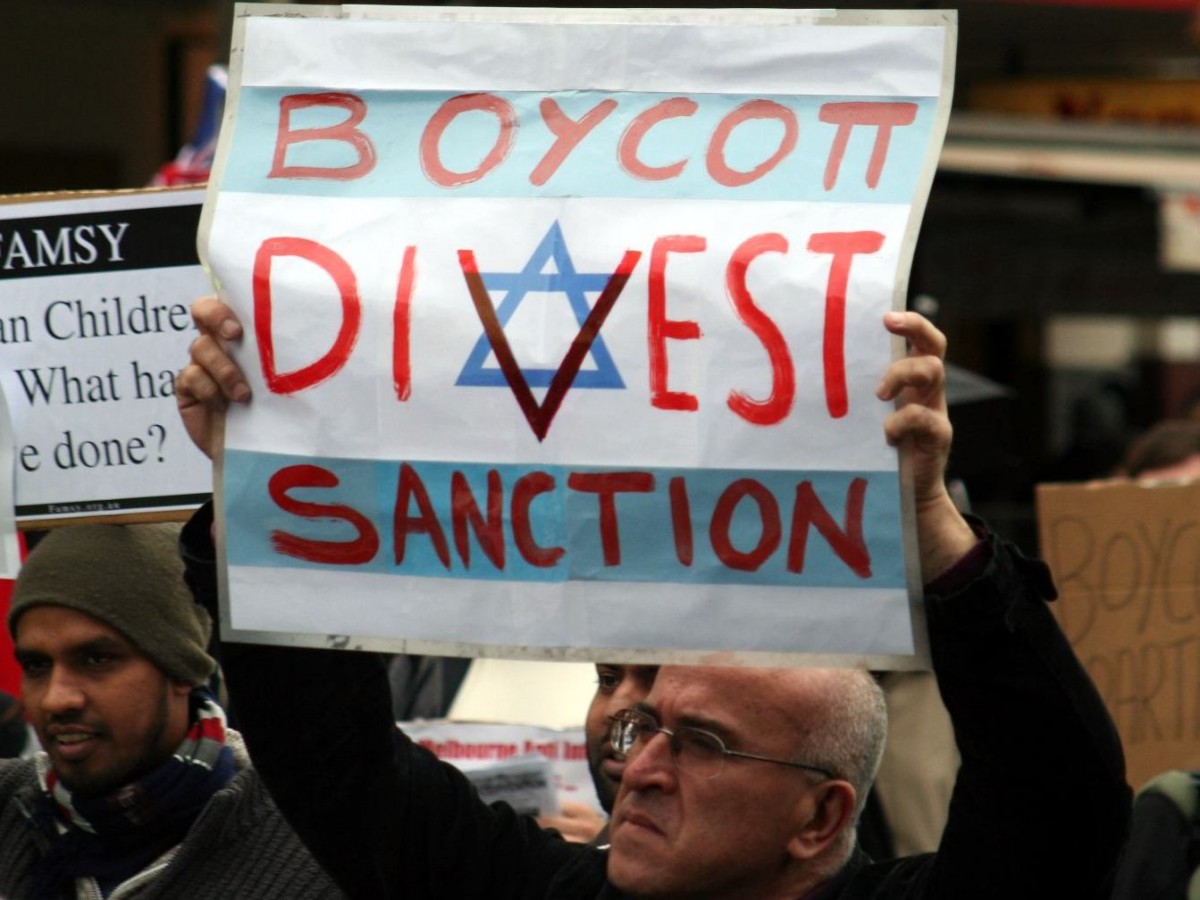 Mounting International Pressure May Force Israel Back To The Negotiation Table

It can be debated if any boycotts against Israel can be truly effective without the support of the United States.

In 1945, the Arab League formally declared a boycott against Israel. Originally designed to limit immigration into Israel-held lands, the boycott caused the international world — particularly major international corporations — to stay out of Israel. Pepsi, McDonald’s, Nestle and most of the Japanese automotive firms did not enter the Jewish state until the late 1980s. Despite the establishment of fines for American companies that choose not to do business with Israel because of the boycott, many opted to pay the penalties.

The Arab Boycott is credited with bringing Israel to the 1994 Oslo Peace Accords, during which — in exchange for recognition of Palestinian self-governance and a partial withdrawal of the Israel Defense Forces from the Gaza Strip and the West Bank — the Gulf Cooperation Council and the Arab League agreed to end the boycott. Today, a modern reiteration of this boycott has emerged in the absence of peace negotiations.

Since Oslo, Israel has been hesitant to re-enter negotiations with the Palestinian Authority despite an increase in border tensions between the occupied Palestinian territories and Israel. Recognition of the Palestinian State as a non-member observer state by the United Nations reflected an increasing trend toward the recognition of Palestinian sovereignty, despite the resistance from Israel and the United States. Israel’s construction of settlements within the West Bank — a violation of the Rome Statute and the Fourth Geneva Convention — has exposed Israel to the possibility of being brought to the International Criminal Court by the Palestinian Authority, and — with shelling currently occurring on both sides of the border — tensions between the two sides have never been stronger.

International pressure has increased for Israel to resume talks. In recent months, the Boycott, Divestment and Sanctions Movement has been gaining support. On June 12, USA Today ran a story about the call — which included novelist Alice Walker and Roger Waters of Pink Floyd — for Alicia Keys to cancel her July 4 concert in Tel Aviv.

Andrew Kadi of the U.S. Campaign to End the Israeli Occupation — which delivered the petition — explained, “We assume Alicia Keys wasn’t familiar with Israel’s abuses of Palestinian human rights, when scheduling, because her performance is legitimizing a country that systematically undermines her non-profit’s mission, that ‘every person has the right to health care and that all children deserve a future.’ ”

Stephen Hawking and the BDS Movement

Keys has expressed her desire to go along with the concert anyways, but other musicians — such as Elvis Costello, Santana and the Pixies — have canceled their Israeli concerts or have committed to not playing in Israel. In May, physicist Stephen Hawking cancelled his planned participation in an Israeli conference at the request of the Palestinians.

Hawking’s rejection of Israel — calling the Israeli government a “regime” in early copies of his statement explaining his reasons for not entering Israel — suggest a changing of attitudes in a boycott that has been going on with little effect since 2005.

As explained by Jonathan Freedland for the Jewish Chronicle Online, “The sad truth is Hawking was speaking out against Israel, not for it. And his status as a national treasure affects how that stance is perceived, making it instantly mainstream rather than fringe or radical. It’s too early to tell if his decision will prove a tipping point for the boycott movement, but it could. As I never tire of pointing out, quoting scholar Ze’ev Mankowitz, people don’t believe in ideas — they believe in people who believe in ideas. Many people around the world believe in and respect Hawking and will, as a result, now think that perhaps they, too, should boycott Israel.”

Hawking’s decision is being heralded as a large step in the movement to call attention to Israel’s treatment of Palestinian people. Typically, academia rarely boycotts or protests political actions, and the thought of Israeli researchers and scientists being excluded from the international scientific community is a disturbing thought. The Boston Globe said Hawking’s decision was “a reasonable way to express one’s political views. Observers need not agree with Hawking’s position in order to understand and even respect his choice. The movement that Hawking has signed on to aims to place pressure on Israel through peaceful means.”

The significance of BDS

Opinions on the effectiveness of the academic boycott — particularly in light of Hawking’s involvement — differs depending on who is asked. While many would minimize the importance of an academic in the long course of international politics, this — in conjunction with corporate divestment and international sanctions — is starting to make a tangible effect.

For example, in September 2012, the Norwegian Minister of Finance announced the decision to exclude the Norwegian organization “Karmel-Instituttet” from receiving tax deductions due to the fact that the organization offered financial support for Israeli settlements in occupied Palestinian territories. In March of this year, the Netherlands announced new guidelines that will call on retailers to label fresh produce coming from illegal Israeli settlements. In Scotland, councils in Clackmannanshire, West Dunbartonshire and Stirling have formally announced boycotts against Israel.

Most impressively, South Africa’s African National Congress has declared its full support of the BDS Movement. The ANC adopted a resolution calling for “all South Africans to support the programmes and campaigns of the Palestinian civil society which seek to put pressure on Israel to engage with the Palestinian people to reach a just solution.”

This strong stance was — in part — influenced by Israel’s anti-African protests last year, in which Netanyahu was reported to have said, “If we don’t stop their [African immigrants’] entry, the problem that currently stands at 60,000 could grow to 600,000, and that threatens our existence…and threatens the social fabric of society.”

In response, the ANC introduced their resolution, which read, “The ANC abhors the recent Israeli state-sponsored xenophobic attacks and deportation of Africans and request that this matter should be escalated to the African Union.”

“Rabinovich … called the academic boycott movement ‘an incremental process’ that has been ‘gathering volume.’ He noted that Hawking’s withdrawal and the attention it drew should be seen as ‘jumping to a new level’ in the attempts to isolate Israeli academic work,” the Daily Forward reported. “Rabinovich characterized Hawking’s decision as only a boost to the BDS movement, not a game changer. The impact of anti-Israeli sentiments in the academic world is already noticeable, he said, and could increase in the future. In humanities and social studies, he said, ‘If you want to get invited to an important conference or to spend a sabbatical in a leading university, you better be politically correct on issues relating to Israel, or else you won’t have a chance.’”

On Monday, Haaretz reported that Benjamin Netanyahu — the prime minister of Israel — is starting to flinch under the mounting international pressure.

“Netanyahu is worried about the growing international boycott against Israel. Most Israelis still do not feel it, but the prime minister is under pressure,” Haaretz reported. “He hears warnings in the business community about the damage the diplomatic impasse is causing, and says that calls for boycotts are the contemporary form of classical anti-Semitism. If he thought it was harmless noise, he would ignore or minimize the problem. But Netanyahu apparently fears being remembered as the leader during whose time Israel was distanced from the family of nations.”

On Friday, Yedioth Ahronoth’s Nahum Barnea wrote on Ze’ev Elkin, Israel’s deputy foreign minister, and his apparent lack of concern that the Magen David Adom — Israel’s branch of the Red Cross — is being asked to stay out of the West Bank by the international community.

“Elkin is living in la-la-land,” he wrote. “He chooses not to see the growing movement to boycott Israel in academia, the cancellation by Stephen Hawking of his appearance at the Presidential Conference because of pressure from boycotters of Israel, the factories that are pulling out of the West Bank because they’re unable to export from there.”

While it can be debated whether any boycotts against Israel can be truly effective without the support of the United States, and it can be debated whether anything lasting will become from all of this, it may be that the best possible result is a new willingness to stop yelling and to start talking. The BDS Movement, since its founding in 2005, has seen only marginal success. Now, as the world has learned more about the situation in Israel and as the number of stable governments surrounding Israel shrink, Israel is faced with the question of whether it can make do with fewer friends.

Only time can tell.