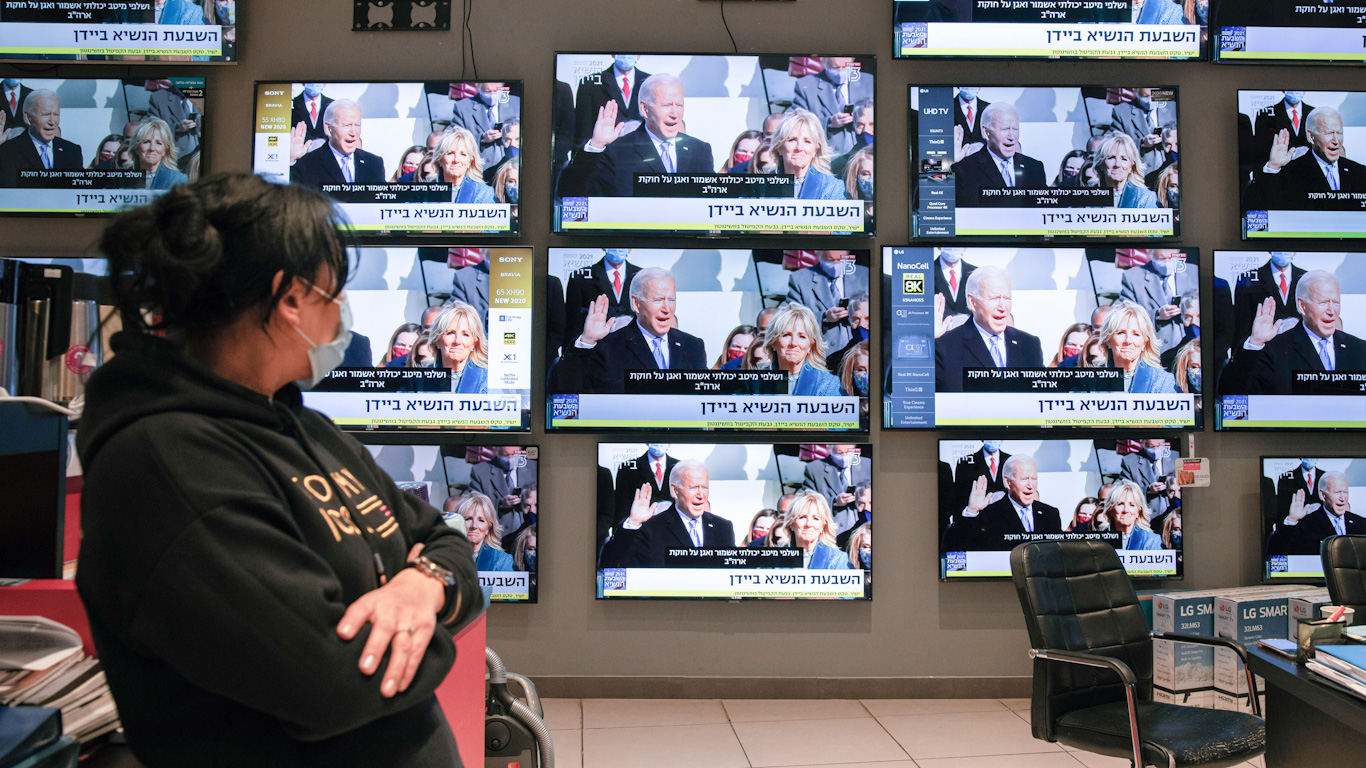 The cantankerous end to the turbulent Trump presidency has imbued the incoming administration with a halo of bright expectations by simple virtue of the disastrous four years that precede it. Like a stand-up feature act that follows an opener’s bombed set at a comedy club, the Biden-Harris duo takes center stage with an easy advantage that requires only the slightest effort to win over a disappointed crowd.

When it comes to Israel, Biden has his work cut out for him. On the foreign policy front, the Biden White House will be pushed to restore Obama’s Joint Comprehensive Plan of Action, known more commonly as the Iran nuclear deal, among other initiatives that began while he served as vice president. Israeli human rights activist Miko Peled detailed this and many other policies scrapped by the Trump administration in an editorial for MintPress last fall, that the new president will likely be called on to reverse.

Nevertheless, any change that Biden makes to U.S. policy in Israel is unlikely to deviate from Trump’s in any meaningful respect. The controversial move of the American embassy from Tel-Aviv to Jerusalem ­– a tacit acknowledgment of Israel’s primacy in the occupied city – will remain in place, while the undoing of other anti-Palestinian actions, such as the de-funding of the United Nations Relief and Works Agency for Palestine Refugees (UNRWA), is already being challenged by Jewish leaders before the new administration commits to any change in that regard.

In addition to specific policy approaches, broader issues threaten to muzzle support for the Palestinian cause and stand in direct contradiction to any ostensible rapprochement Biden might undertake and undermining any real progress in the fight to curb Israeli state violence against Palestinians, not to mention dangerous implications for free speech around the world.

A definition for all seasons

The International Holocaust Remembrance Alliance (IHRA), founded in 1998 by former Swedish Prime Minister Göran Persson to uphold the tenets of the “Stockholm Declaration,” has become the flagship organization in regards to the implementation of Goebellian restrictions on critical speech against the apartheid state. Originally described as a ‘task force,’ the intergovernmental association put forth a “working definition of Anti-Semitism” in 2016, which all 34 member nations have adopted in some official capacity.

The U.S. State Department had been using a classification of Anti-Semitism since 2010 and updated it to the IHRA’s version in 2016 as a “non-legally binding” definition. In 2019, Trump issued an executive order applying the definition to Title VI of the 1964 Civil Rights Act, which requires the Department of Education to consider an “individual’s actual or perceived shared Jewish ancestry or Jewish ethnic characteristics” when reviewing violations under Title VI. The move was hailed by the ADL and former members of the Obama administration but derided by pro-Palestinian rights groups, who charged that the codification of the IHRA’s “working definition” violated free speech on college campuses and targeted the Boycott, Divestment, and Sanctions (BDS) movement, which has built a solid opposition against Israeli policies of ethnic cleansing in the West Bank and Gaza.

Even Kenneth Stern, lead author of the “working definition,” voiced disagreement over the EO’s intention, accusing rightwing Jews of weaponizing the terminology. An example of how such laws will serve to marginalize the voice of Palestinians and any other group or individual who falls on the ‘wrong side’ of the debate manifested itself in a controversy over an N.Y.U. seminar hosted on the video platform Zoom, after a pro-Israel student group called on the private platform to take the seminar down after the group’s leader, Javier Cohen, discovered the participation of Palestinian activist, Leila Khaled, who is a member of a Palestinian group tagged as a terrorist organization by the U.S. State Department.

Any illusions that Biden will push back against the IHRA’s definition, or Trump’s EO, is belied by the Biden campaign’s clear promises to the Jewish community in which Biden ties the specter of anti-Semitism directly to the creation of a “domestic terrorism law that respects free speech and civil liberties.”

In fact, the impetus for the so-called domestic terrorism law is one of the two most significant challenges to the idea that President Biden will do anything other than continue Trump’s pro-Israel policies. Ostensibly motivated by the events of January 6, the disillusioned masses of Trump supporters are being framed as the first scapegoats in a protracted implementation of a legal framework that allows states to target American citizens, led by Obama-era neo liberals since 2017. Together with the ubiquitous Israeli lobby in Washington D.C., Biden would have to betray his own class and political sponsors to become the champion of Palestinian self-determination some in the media are portraying him to be.

The base and the lobby

The Trump administration’s strong ties to the settler state and its far-right leadership dovetailed with his so-called ‘alt-right’ base, which see Zionist policies as serving their own quasi-religious, patently racist goals. But, in the wake of Trump’s defeat, many of his staunchest supporters, adherents of the QAnon LARP, and disparate MAGA types, have been left reeling, posing a potentially explosive political challenge to the incoming Biden administration.

Calls to censure, deplatform, and otherwise banish Trump’s right-wing base have proliferated since the Capitol riots and made good by a number of powerful private corporations, such as Twitter and Facebook, which launched a purge of conservative accounts on their social media platforms. More troubling manifestations of these kinds of fascistic crackdowns have escaped the purely virtual realm with companies like Airbnb applying similar criteria to deny lodging reservations to individuals considered problematic and, more recently, the payment processing giant PayPal booting customers as a result of their political views or affiliations.

In Biden’s “Plan Of Friendship, Support And Action” for the Jewish community, the rhetorical ties between anti-Semitism and Trump’s base is made explicit, citing the white supremacist rally at Charlottesville in 2017 as a “resurgence of anti-Semitism” and, significantly, claiming it was the very reason that he decided to run for president.

The dystopian implications cannot be overstated. Moreover, officially sanctioned definitions of hate speech like the IHRA’s classification of Anti-Semitism, advances a specific legal framework to restrict any and all criticism of Israel and its persistent violations of human rights against the Palestinian people, the dispossession of their land, and outright murder of women and children by the IDF.

Given that much of Trump’s base has been overtly and tacitly linked to Anti-Semitic sentiment, it is not in Biden’s political interest to downplay these associations. In fact, it is likely that his administration will lean into such claims as a result of the declared aims of Democratic Congressmen and women to bring forth legislation to address “domestic terrorism” motivated by the MAGA-inspired “insurrection” at the Capitol.

On the foreign policy side of the spectrum, Biden is more likely to follow through on some of the expected rollbacks of Trump’s heavily pro-Israeli policies. But, these are unlikely to go beyond the most symbolic gestures, while leaving the ‘meat and potatoes’ of the long-standing Israel-U.S. relationship intact.

Biden, after all, has declared himself to be an avowed Zionist and maintains a good rapport with the American Israel Public Affairs Committee (AIPAC) and other important Israeli lobby groups in the United States. In 1986, Biden famously proclaimed that it was “about time we stop apologizing for our support for Israel,” declaring that if the apartheid state didn’t exist to protect American interests in the region, “the United States of America would have to invent [it].”

In a 2019 televised interview on PBS, Biden’s commitment to rhetoric over effective policy in the Middle East was made clear. Asking about the suggestion by some Democrats that the United States should consider cutting off military aid to Israel over its illegal settlements in the West Bank, Biden replied that doing so would be a “tragic mistake” despite claiming that he “opposed Israel’s settlement policy.” Other than stating that as vice president he had made his views on the matter “crystal clear to the Israelis,” he nevertheless concluded by reaffirming the idea that actually applying any pressure to bring about a change in Israeli policy was “absolutely preposterous,” and “beyond [his] comprehension [why] anyone would do that.”

The same goes for his stance on BDS, which the president characterized as “wrong” before an audience at AIPAC headquarters in 2016. A senior advisor further underscored Biden’s alignment with the powerful Israeli-American lobbying firm, confirming that the administration would “stand up forcefully against [BDS],” and would “Absolutely” defeat the movement’s efforts to denounce Israel’s violations of international law.

Regardless of the red and blue propaganda that is central to American politics, a pattern emerges when it comes to the perennial policies and the long game of the permanent American state – a feature which is most salient in terms of its relationship with Israel. Biden will continue one of the hallmarks of the Trump presidency by supporting the policy of normalization of Arab states with Israel – a policy he directly commits to in his “Plan” for the Jewish community, finishing the work started by Jared Kushner to cement a cordial bond between Saudi Arabia and Israel, exposing the duplicity of the American two-party system by coddling two of the worst human rights abusers on the planet.