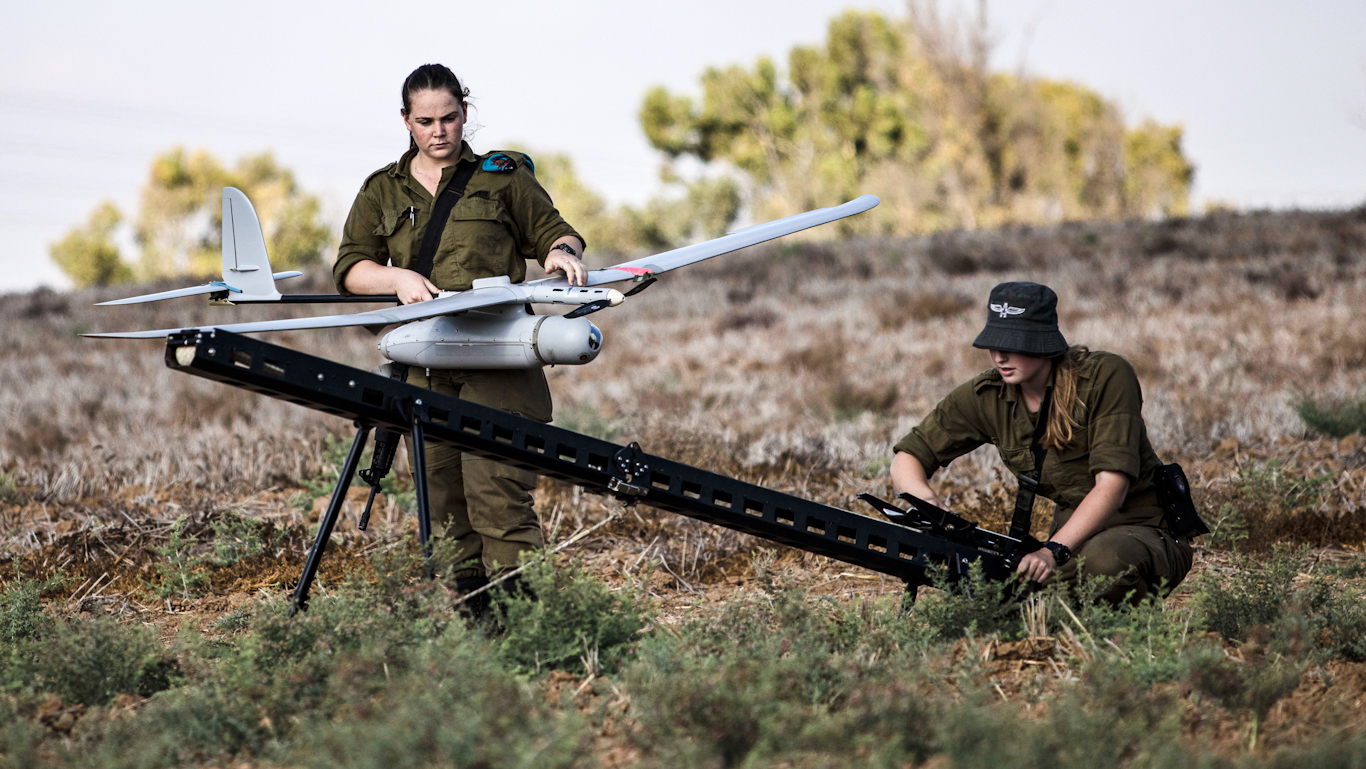 “Today I can speak of this openly,” Israeli Defense Forces (IDF) Brigadier-General Neri Horowitz said during the annual UVID DroneTech conference hosted by Israel Defense magazine in Tel Aviv last week. The senior officer discussed how Israel has used combat drones around the world since 2012, including in operations in Gaza and Syria.

With one of its worst-kept secrets confirmed, Israel is now taking the opportunity to boast about its drone technology to international audiences, touting the equipment’s capabilities as a less savage and more efficient solution to conflict.

Complicit in occupations around the globe

Israel has been using drones in its warfare as early as 1968, when the IDF’s intelligence directorate, Shabtai Brill, secured cameras to remote-controlled aircraft in order to surveil the Egyptian border. During the 1982 Lebanon War, Israel used drones to annihilate military positions in the Lebanon Valley. By 1986, it was revealed in a declassified CIA report that Israel had exported drones to the U.S. Navy, Switzerland, and Singapore.

Drones capable of deploying munitions were not invented until the 1990s, but by the near end of the 2000s, armed drones became Israeli military industries’ most lucrative export item. Combat drones increased the volume of military export transactions from $4.8 billion in 2007 to an annual total of approximately $7 billion beginning in 2008. Last year, drones made up 9% of Israel’s $11.3 billion in arms exports, contributing to about $1 billion in sales.

Israel Aerospace Industries (IAI) and Elbit Systems are the primary Israeli manufacturers of armed unmanned aerial vehicles, commonly referred to as drones. These companies did not respond to MintPress News inquiries on who they have sold armed drones to and whether they will begin advertising combat drones given the censor’s removal.

Similar to using armed drones in its own occupation (specifically targeted assassinations in the besieged Gaza Strip), Israel assists other states in their occupations as well with its armed unmanned aerial vehicle (UAV) sales.

Azerbaijan purchased IAI Harop drones, a “loitering munition” or kamikaze unit which destroys itself after attacking a target. It also bought Elbit Hermes 900 armed drones in arms deals with Israel over the years.

These drones have been used against Armenia throughout the two nations fight over the Nagorno-Karabakh territory. The Israel Defense Ministry did not respond to press inquiries on where else Israeli armed drones are used.

While Israel has remained relatively quiet on its arms sales, Azerbaijan has bragged about using Israeli weapons in the fighting — fully displaying armed and kamikaze drones made by Elbit, Aeronautics, and IAI during a military parade in 2020.

Although only publicly normalizing relations in 2020, Israel and Morocco have long collaborated in a military capacity. Morocco acquired IAI’s Heron unarmed UAVs in 2013, and the equipment has reportedly been seen at bases in the Western Sahara, a region occupied by Morocco.

According to defense think tank, the Royal United Services Institute (RUSI), the Israeli military and Israel’s UAV industry are closely connected. “Part of the reason for this is the very high proportion of senior personnel in the UAV industry who are either retired or still active duty reserves,” RUSI wrote. “This helps to ensure that there is a deep commonality of understanding of operational priorities and requirements between UAV developers and the IDF.”

Using the Gaza model in the West Bank

In addition to selling armed drones, widespread reports have indicated Israel has long used the armed unmanned aircraft in carrying out strikes against personnel and weapons cargo targets in Gaza, Lebanon, Egypt, Syria, and Sudan.

The low buzzing of Israeli drones in Gaza has become so enmeshed in daily life that Palestinians refer to them as “zanana” or “buzz” in Arabic. That same incessant hum can be heard in the occupied West Bank. While often used as a surveillance tool on the other side of Palestine, the Israeli Army Chief of Staff, Lt.-Gen. Aviv Kochavi, approved the use of armed drones in targeted killings in the West Bank in September — thereby greenlighting death to rain from above.

According to Israeli media, the military is already preparing units to operate armed drones during raids. Army incursions into the occupied territory have surpassed 2,000 this year and turned Palestinian cities such as Nablus and Jenin into battlefields. So far, Israeli forces have killed more than 100 Palestinians this year in the West Bank, largely due to military raids, including a 15-year-old girl who was shot dead earlier this week.

In recent years, Israel has transformed its military occupation of Palestine into a digital experiment in which an assault can be executed with the mere push of a button. Showering tear gas via drones, firing sponge-tipped bullets with a remote control, and surveilling Palestinians with a touch of a screen.

And while Israel touts these technological advancements as a less bloody and gruesome approach to its state violence, in reality, the digital barrier and perceived distance between an Israeli soldier and a Palestinian is likely to make pulling the trigger that much easier.