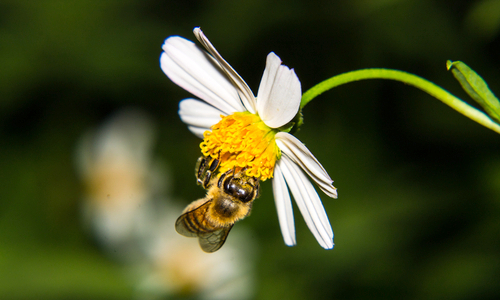 (ANTIMEDIA) As the world’s bee population continues to decline, the community of Oslo, Norway is taking action to protect its pollinators. The Oslo Garden Society is working with the city’s municipal government, businesses, environmental organizations and the public to create a “bumble bee highway” that will provide food for bees.

Urban areas have few flowers for bees to feed on, which effectively starves the insects and consequently affects agriculture that depends on pollination. The Oslo Garden Society’s solution has been to build a corridor that will consist of feeding areas every 250 meters (820 feet). The route runs from east to west through the city and involves the placement of nectar-rich flowers on rooftops and balconies. Tonje Waaktaar Gamst spoke about the bumblebee highway on behalf of the Garden Society:

“The idea is to create a route through the city with enough feeding stations for the bumblebees all the way. Enough food will also help the bumblebees withstand man-made environmental stress better.”

To maximize the effectiveness of the project, an organization called BiBy (Bee Town) developed an app to highlight “gray areas” through the corridor that are in need of more plants. App users can use the tool to learn where to plant more flowers.

The local, collaborative approach to saving the bees is a promising one. It is especially impressive because compared to other nations, Norway’s bee population is relatively safe. Out of 35 species, 6 are at risk of extinction. In contrast, from April 2014 to April 2015, United States beekeepers lost 42.1% of their entire population. In some areas of the country, 60% were wiped out.

The bee population has declined in recent years for a variety of reasons. The use of pesticides and insecticides in agriculture is a central factor, but disease, parasites, stress, and other factors contribute to the problem.

Though the situation is dire, recent news suggests there is hope. In addition to the new bee highway in Oslo, the United States Environmental Protection Agency announced this week that it would ban the use of pesticides while certain flowers and plants are in bloom, allowing bees to consume their nutrients (though this is a necessary and laudable move, it should be noted that the EPA approved these toxic chemicals in the first place).

Oslo’s proactive plan to save the bees is a powerful sign that at least in some regions of the world, the danger facing the bees is taken seriously. It is a prime example of community-based, cooperative solutions to seemingly insurmountable problems and—as the first of its kind—may inspire other cities to act accordingly.

This article is free and open source. You have permission to republish this article under a Creative Commons license with attribution to the author and TheAntiMedia.org. Tune in! The Anti-Media radio show airs Monday through Friday @ 11pm Eastern/8pm Pacific. Help us fix our typos: [email protected].