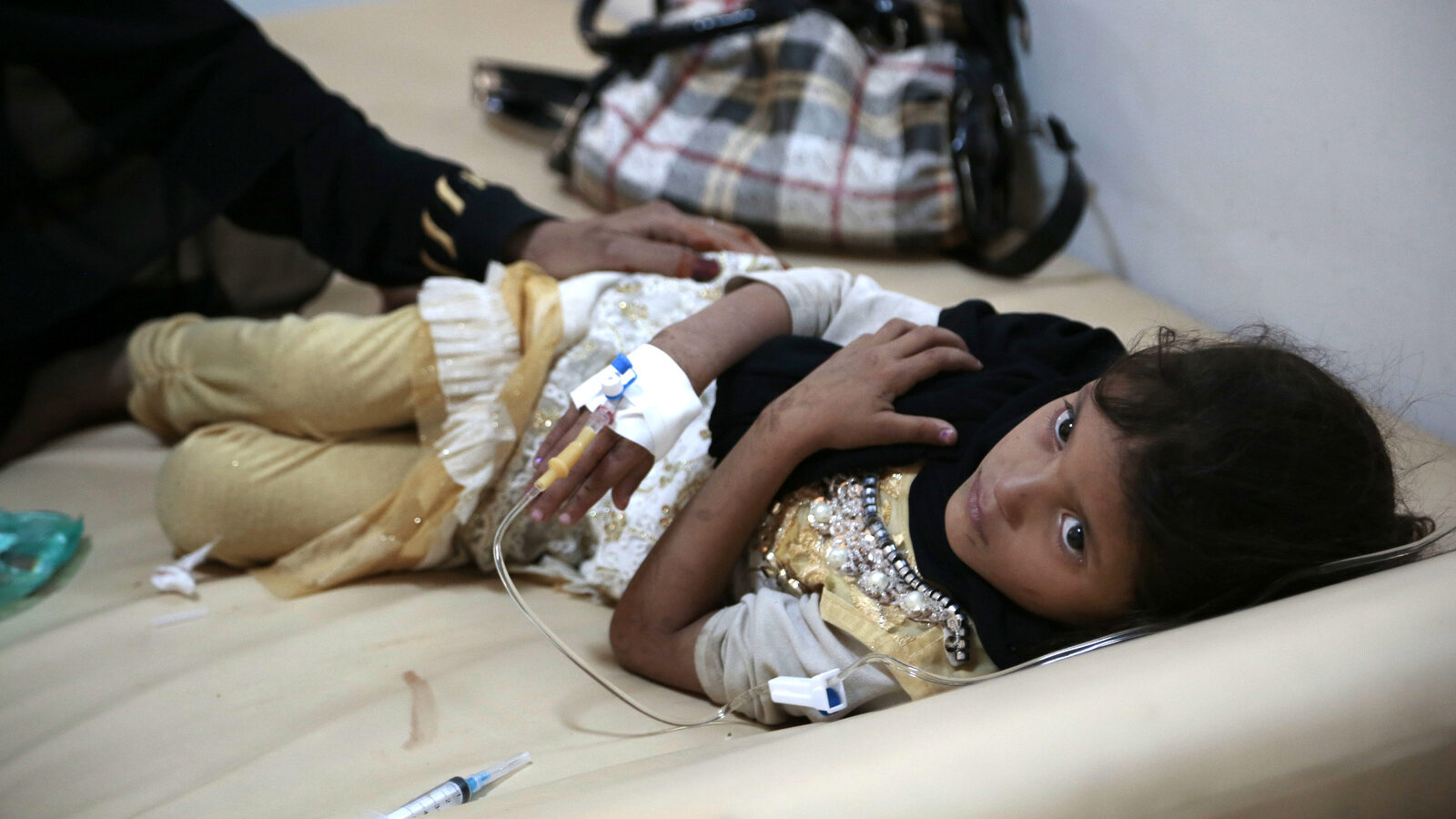 Ignoring The Human Disaster In Yemen

The West’s protestations about human rights sound hollow when one looks at Yemen where the U.S. and U.K. place profits from arms sales to Saudi Arabia over the carnage those weapons are inflicting.

It is hard to imagine that along with the catastrophe that has been inflicted on Syria for the past six years, another calamity is unfolding in Yemen of damning proportions while the whole world looks on with indifference.

What is happening in Yemen is not merely a violent conflict between combating forces for power, but the willful subjugation of millions of innocent civilians to starvation, disease and ruin that transcends the human capacity to descend even below the lowest pit of darkness, from which there is no exit.

Seven million people face starvation, and 19 out of 28 million of Yemen’s population are in desperate need of humanitarian aid. Both the Saudis and the Houthis are restricting food and medicine supplies from reaching starving children; many of them are cholera-ridden, on the verge of joining the thousands who have already died from starvation and disease. More than 10,000 have been killed, and nearly 40,000 injured. UNICEF reports nearly 300,000 cholera cases, and a joint statement from UNICEF and the World Health Organization declares the infection is spreading at a rate of 5,000 new cases per day.

The Associated Press documented at least 18 clandestine lockups across southern Yemen run by the United Arab Emirates (UAE) or Yemini forces, where torture of unimaginable cruelty is routine. The torture of prisoners is reducing them to less than an animal ready for the slaughter. One example of such extreme torture is the “grill,” in which the prisoner is tied to a spit like a roast and spun in a circle of fire.

Another method of slow death is where detainees are crammed in shipping containers and guards light a fire underneath to fill it with smoke, slowly suffocating detainees. Prisoners are blindfolded and shackled in place in a box too small to stand in for most of their detention. Constant beating by steel wires is common, which often results in the death of the detainee. As Dostoyevsky said: “People talk sometimes of bestial cruelty, but that’s a great injustice and insult to the beasts; a beast can never be so cruel as a man, so artistically cruel.” The US has been aware for some time of allegations of torture, but professes that there have not been such abuses.

Related: U.S.’ Role In Saudi’s War On Yemen May Include Torture

Moreover, the blockade of imports of food, medicine, and fuel, which Yemen is completely dependent on, is making the situation dire beyond comprehension. If humanitarian aid is not provided immediately, millions of children will starve to death, even though the international community is cognizant of this ominous situation.

The conflict escalated in March 2015 when the Saudi-led coalition (including Bahrain and Sunni-majority Egypt, Jordan, Kuwait, Morocco, Sudan, Qatar, and the UAE) began a military operation to restore the internationally-recognized government of Abu Rabu Mansour Hadi to power.

The Saudis’ targets are the Houthi forces, who are a Zaydi Shiite Muslim minority and have been fighting for control of the country. They are loyal to former President Ali Abdullah Saleh, who was deposed in 2011 following a popular uprising instigated by the Arab Spring.

The Houthis have suffered immense discrimination, and their grievances have been addressed neither before nor after the Gulf Cooperation Council’s March 2013 initiative that launched a National Dialogue Conference, which failed to resolve the dispute over the distribution of power.

The Saudis claim Iran is behind the Houthis’ rebellion. Although Iran and the Houthis adhere to a different school of Shiite Islam, they share similar geopolitical interests.

Iran is challenging Saudi Arabia for regional dominance, while the Houthis are the main rival to Hadi and the U.S.-Saudi backed government in Sana’a. For the Saudis, losing Sana’a would allow Iran to exert major influence in the Arabian Peninsula in addition to its alliances with Iraq, Syria, and Lebanon.

The Saudi coalition is meant to signal to Iran that it will not be allowed to gain any influence in Yemen.The Houthis joined forces with Saleh and expanded their influence in northwestern Yemen, culminating in a major military offensive against the military and a few rival tribes in which they captured the capital Sana’a in September 2014. The Saudis’ bombing against the Houthis has been indiscriminate: schools, hospitals, homes, marketplaces, weddings, and even funeral homes were targeted to maximize casualties, egregiously violating the laws of war and continuing to do so with impunity.

The U.S. along with the United Kingdom have for many years been selling offensive weapons to Saudi Arabia, which are now used to attack Houthi-held areas. The UAE, Kuwait, and Jordan received licenses to sell and service American-made military helicopters for Saudi Arabia, which sends a clear message to this unholy coalition that they can kill with impunity.

U.K. Home Secretary Amber Rudd shamelessly said [selling arms is] “good for our industry” — not an acceptable reason to sell offensive weapons that kill people indiscriminately. Nevertheless, the U.S. does have national security and economic interests in the Arabian Peninsula: particularly, it seeks to ensure free passage in the Bab al-Mandeb, through which 4.7 million barrels of oil pass each day; and the support of a government in Sana’a that would cooperate with US counter-terrorism battles. That said, the U.S.’ direct involvement in the conflict makes it complicit in the coalition’s violation of the laws of war, and top U.S. officials could be subjected to legal liability.

Sadly, the Trump administration has forfeited its moral responsibility by not insisting that Saudi Arabia, over which it exercises tremendous influence, open the ports to ensure that enough food and aid enters the country, without which millions will starve to death.

The conflict is going from bad to worse as international efforts to press both sides have been woefully inadequate, and media attention is nearly absent. Continued fighting will further fuel the struggle between Saudi Arabia and Iran, and contribute to other regional conflicts. Moreover, the prospect of finding a peaceful solution is becoming increasingly difficult and laden with uncertainty, as the Trump administration believes that a solution lies with more military force. Trump justifies his bellicose approach as he sees Iran as the culprit who is raging a proxy war against the Saudis and benefiting from continued instability.

For these reasons, the E.U.’s neutrality has allowed it to maintain contact with all the conflicting parties, and is best positioned to build on its credibility to persuade both sides to agree on a ceasefire and settlement. The Houthis want to negotiate with someone with authority rather than a mediator, and refuse to have talks with U.N.-appointed envoy Ismail Ould Sheikh Ahmed, who they consider to be biased. They also view the U.S. and the U.K. with suspicion, as they are the chief suppliers of weapons to Saudi Arabia.

Although France and Britain are supportive of the military campaign, they can be coaxed by the E.U. into introducing a UNSC resolution that must first, focus on a ceasefire; second, address the humanitarian crisis; and third, work on a permanent solution that would take the Houthis’ interest into full account. As Gandhi once observed: “Three-fourths of the miseries and misunderstandings in the world will disappear if we step into the shoes of our adversaries and understand their standpoint.”

The conflict in Yemen can end only through a political solution, as no solution secured by force will survive. The Trump administration must learn from Iraq and Syria’s intractable violent conflicts, which could not be resolved through military means. To resolve the conflict in Yemen, the U.S. must join hands with the E.U. to achieve a peace agreement and put an end to the unconscionable tragedy inflicted on millions of innocent people.

Just take a look at the eyes of a starving, sick, and dehydrated little child whose heart is just about to stop. Multiply this image by tens of thousands and ask yourself, where have we gone wrong? We have gone wrong because it has been long since we lost our humanitarian and moral compass.

Dr. Alon Ben-Meir is a professor of international relations at the Center for Global Affairs at NYU. He teaches courses on international negotiation and Middle Eastern studies. He contributes to Consortium News, where this editorial first appeared.